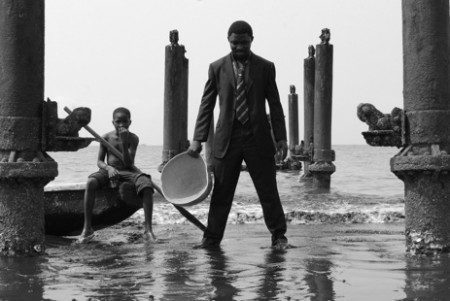 Em’Kal Eyongakpa (born in 1981 in Cameroon) lives and works in Cameroon.

Em’kal Eyongakpa approaches the experienced, the unknown, as well as collective histories through a ritual use of repetition and transformation. Eyongakpa’s interwoven installations, which could be experienced as paradoxical systems, not only blurs the boundaries between employed media, but could also alter the notion of the real and the illusory.

Since 2007, the artist has traveled widely between Africa, Europe and the Americas,these voyages and itinerant spaces are increasingly reflected in the forms and deliberations, processes and encounters, that stand at the core of the aesthetics of his work.

His recent ideas/performances increasingly evoke notions of trans generational memories,ethnobotany, applied and ethnomycology,cosmologies among other interests, in his explorations of the personal and the universal.