Hoor’s Dream, or what does a princess dream of ?

Dalila Dalléas Bouzar provides a painting series made after photos posted on the Internet by the princess Hoor Al Qasimi of the Sharjah Emirat (UAE). Among these photos, taken during princess Hoor’s travels, you can find selfies showing her artistic and architectural preferences, or her daily life as President of the Sharjah Art Foundation. Sharjah, one of the states of the United Arab Emirates, is known for its museums. Has the princess dreamt of these museums, when she were a child, has she dreamt of all the exhibitions organized in a country now widely open to the arts  ? Dalila explores the virtual world of this princess in love with arts, exalting it through her paintings. A real mise en abime of the picture. 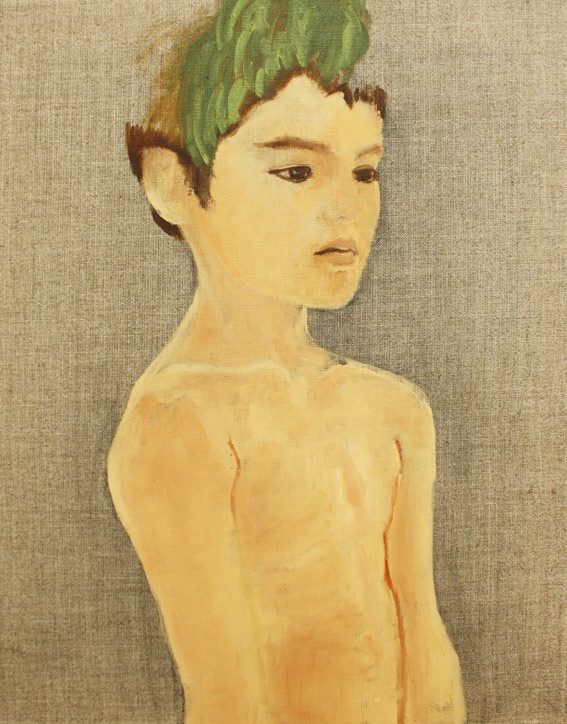 In Dalila’s self-portrait series Taboo, developped in 2013, faces of rebellious beauty, tinged with melancoly, arose from the evenly grey, vaguely gritty surface of raw canvas. Like apparitions emerging from a hidden compartment inside the painting, slightly spectral, they evoked other times, other worlds, other dimensions, other women…

In the works presented for this new exhibition, Dalila explores the same process, which consists in dedicating a large, peripheral portion of the pictorial space to the raw canvas itself. This blank and ligneous, almost organic surface has the consistency of a clay, kneaded by an invisible hand to shape, not women this time, but children – or rather, one child  : Soléman.

Soléman, son of the artist, star of her universe. What would a universe be without stars  ? Unending darkness, unfathomable abyss. The star illuminates, the star warms, the star consoles. Children are women’s consolation, mothers’ relief. Of course, but not only. You need to go further: childhood, consolation and light for the adult. The child plays. The adult wanders about. Yes, you’ve heard me right  : the roaming adult fools his fellows, and fools himself. If it isn’t his mode of being, this tendency to conceal and to repress has in any case much in common with it, and he has to fight hard and long to reach his Grail  : transparency, or maybe rather translucidity.

Adults, those grown up children, have become opaque and, in a way, they’ve given up childhood, sending it back to the past, to the inaccessible, to the realm of imagination. Childhood, on the other hand, will always be synonymous with innocence. But you might think it’s simplistic to describe the adult as a perverted being, and the child as an ideal one. You might argue that children can be cruel too, that they perfectly know how to harm animals, to tear off the legs of the grasshoppers, to devastate anthills, to give toads a smoke, and that in their school’s playground, they can be merciless with each other.

That’s for sure, but then I would reply that from that point of view, we, adults, are much more efficient than them: we have organised and systematised the suffering we inflict to animal species, and, in the huge playground of our social life, treachery, cowardice and baseness, agressiveness and malevolence are much more visible constants than confidence, benevolence and courage.

Now, children possess something we don’t have any more. Although they may be mean, cruel or unbearable sometime, they still have the grace, the elegance of the invisible shows on their skin and shines in their smile. That’s what Dalila tries to capture. That’s what she conveys to us through those faces, these looks, the motion of an arm, a posture  : that lost treasure, somewhere within us. And that’s the reason why, when you look at them, her paintings act like a balm.