Conclusions from the Symposium inExchange

What is there to do when it comes to international cultural policy and exchange?, asks our author Sophie Eliot...

A symposium of this kind raises questions before it’s even begun: how can something as fragile and diverse as an encounter of people from different regions of the world be planned ahead in funding guidelines? And what does “intercultural” mean anyway? In her opening speech, Ekatarina Degot explains to what extent the “desire for exchange” is translated in projects such as the Academy of the Arts of the World (Cologne). As the artistic director, her answer to the occidental canon is an understanding of exchange as pluriversality (Mignolo). (1) With this approach, Degot seeks to break down representations of cultural identities in a non-hierarchical dialogue. This is a gesture all representatives of the independent scene share, as Natascha Sadr Haghighian (artist) declares: “Cultural politics is like naan bread,” an absurd duplication, producing a form of othering deeply rooted in the European mindset of national borders. The term “intercultural” is criticized and there is a debate about the function of intermediary institutions of the Federal Foreign Office as well as the political administration itself.

The symposium’s point of departure is the presentation of the information portal touring artists, offering internationally mobile artists consulting services free of charge. During a talk with ifa there was a discussion on the relation of mobility and locality alongside the criticism of institutions out of touch with reality, where the final products seem to matter most. “What about the social component?” Andrea Knobloch (IGBK) asked in an interview. She seeks to replace the dead-end accusation of an institutional exploitation of art projects by questions concerned with the structural inclusion of local realities and the invisible power that comes into operation. 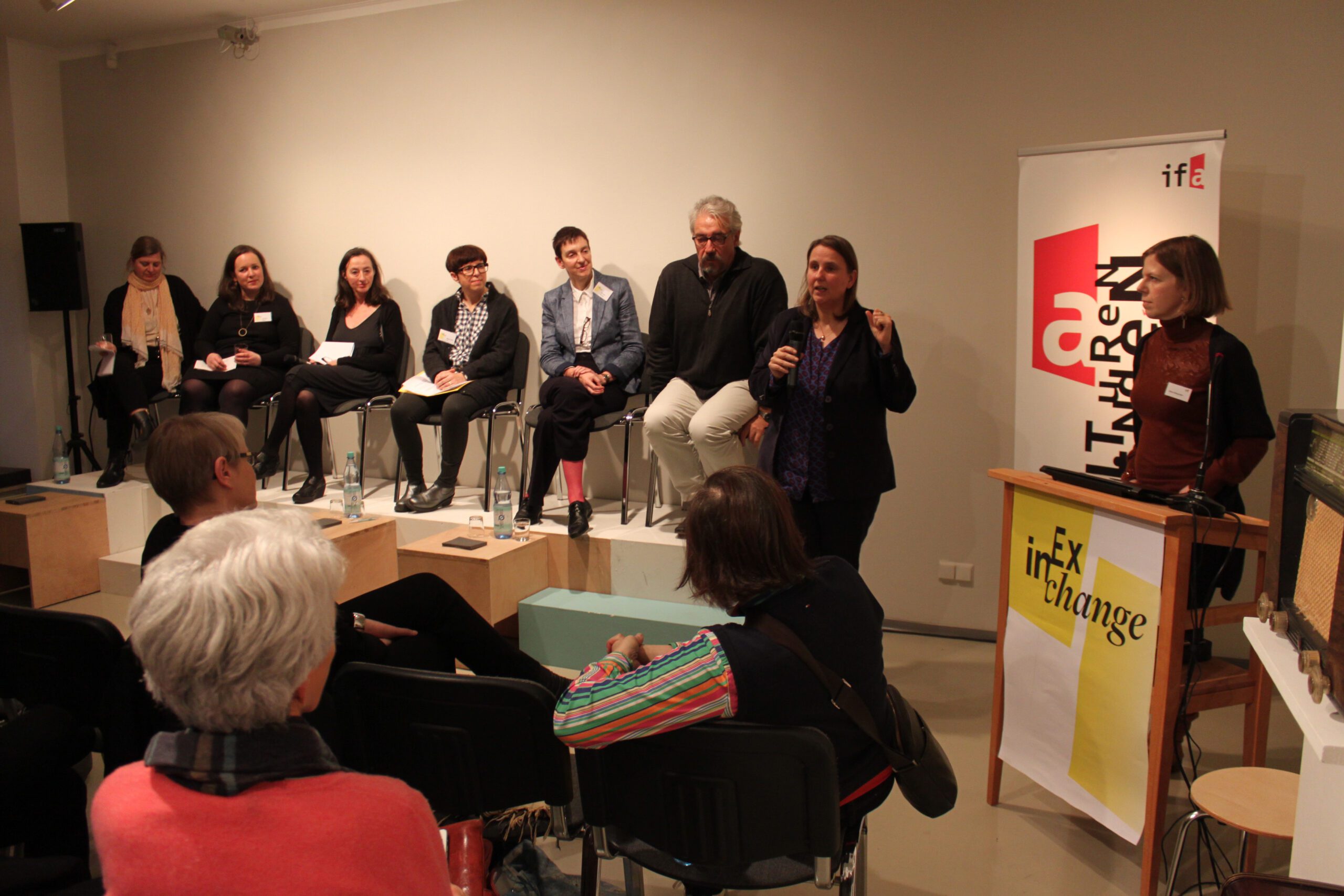 The residency program of the Goethe-Institut Bangalore (India), for example, arranges for a decentralized accommodation of the participants, which are selected in collaboration with local partners. Antje Weitzel (uqbar, Berlin) challenges the transparency of quality criteria, referring to the heightened media resonance her project do fard underwear Tehran – Berlin coincidentally profited from due to the economic sanctions against Iran being lifted. Just as unpredictable are the processes that happen during the encounters themselves. The artist and researcher Claudia Reiche, bangaloREsident 2014, talks about how the question „Why are you here?” she was asked by hijras (2) made her fantasies of contact crumble and how she confronted herself with her own conscious and unconscious motivations in the exchange on foreign terrain. Locality may also suddenly catch up with us. Out of the collective desire for agency, in 2012 Sarah Rifky and Jens Maier-Rothe founded the art space Beirut (Cairo), which closed several months before the new legislation was passed by the Egyptian government.

What is there to do? There’s a great unease not only regarding the rhetorical submission that lies in “proposal poetry” (Anna Jäger, SAVVY), but also concerning more complex fields of action such as in Iran or Egypt, where informal spaces are legal gray areas and applying for a visa becomes a high-wire act. Government institutions are criticized for ignoring the structurally asymmetric balance of power as well as systemic racism, also in German embassies. The Federal Government, represented by Andreas Görgen, the director of the department for culture and communication of the Federal Foreign Office, consequently stresses the importance of intermediary institutions such as the ifa and the Goethe Institutes, which take action where the administration cannot and should not. He refers to the Review Process initiated by Federal Foreign Minister Frank-Walter Steinmeier, which the IGBK was invited to and which involved talking to members of the independent scene about their needs.(3)

Finally Elke aus dem Moore, director of ifa’s art department, emphasizes the “societal development objective” of independent project spaces and their enormous potential despite tight budgets, pointing out successful collaborations (4) such as the Berlin Biennale. Nevertheless she calls for an urgently needed adjustment of funding to the short-term nature and at the same time flexibility of current working conditions as well as the processuality of production while costs for mobility are rising. Furthermore, protagonists of the independent scene advocate a case-by-case review of proposals instead of undifferentiated directives. The symposium In/Exchange made it clear that on an administrative level there is an urgent need for developing alternative funding schemes. Coming up with a reality-based counterproposition for the expletive “intercultural” would be a good way to start.

(2) “Hijra” is a term in Hindi denoting the “third sex”. It cannot be translated with transsexual or transgender.

(3) General information on the Review Process

(4) According to the Federal Foreign Office, 120 projects were funded in 2015 with more than 300 artists and an increasing number of local collaborations, including the following Projects published by ifa: Nafas Art Magazine, Contemporary And, and the publication dreams of art spaces collected (2015).