Come on, don’t be so white!

Rebelling against old thought patterns and stereotypes is a survival strategy for many artists of African heritage. And Europe still has a lot to learn in this respect.

A sunny afternoon in Soweto’s southwest. Albert Ibokwe Khoza is facing me, standing very close, and he’s naked. Naked and obviously furious. He has only just burned a few dried leaves and waved them around in the improvised performance space. Now he’s staring at me and the other front row spectators with glinting eyes. He plants himself in front of us and stamps his big feet loudly. Albert is a traditional healer, a sangoma, so maybe it’s to do with a ritual, I think. But then he grabs his 1.50 metre long pigtail and whips it across the concrete floor. He’s just irritated, he says. When he was training to be a dancer people had already kept giving him those strange looks. Then he laughs and does a few Tendus.

Albert is quite a phenomenon, and of course he knows that with his roughly 130 kilos he wouldn’t have had a chance in any of the country’s ballet ensembles. He is also aware of the fact that for a gay, overweight Black dancer and healer life is inevitably complicated. Even so he feels dejected about never really fitting in – neither in South Africa nor in Europe. That night the 27-year-old is holding on to a bottle of beer while he exchanges kisses on the cheek with dressed up concert goers in front of a theatre in downtown Johannesburg. Albert engages with us, the guests of a Goethe Institute cultural festival African Futures, and the young, hip concert crowd as naturally as he does with medicinal plants and rituals. And yet it shows – his struggle to find his place. An openly homosexual man doesn’t fit in with the conservative sangoma community of Soweto. An overweight dancer might at best make it into experimental stage shows. And especially on European stages a performer like Albert will primarily be one thing: exotic.

He’s already caught the western festival scene’s interest. And I can anticipate the success he’s going to have in Europe. After all, he so nicely breaks the mould of the exotic which we secretly crave here, besides, his agent lives in Berlin. But there Albert will be moving within the framework of a Eurocentric art scene. He will speak about identity and his struggle for acceptance. He will, sing, stomp and charm everyone. And presumably he will only be able to convey a glimpse of what a tedious business it is to have to deal with one’s own identity. 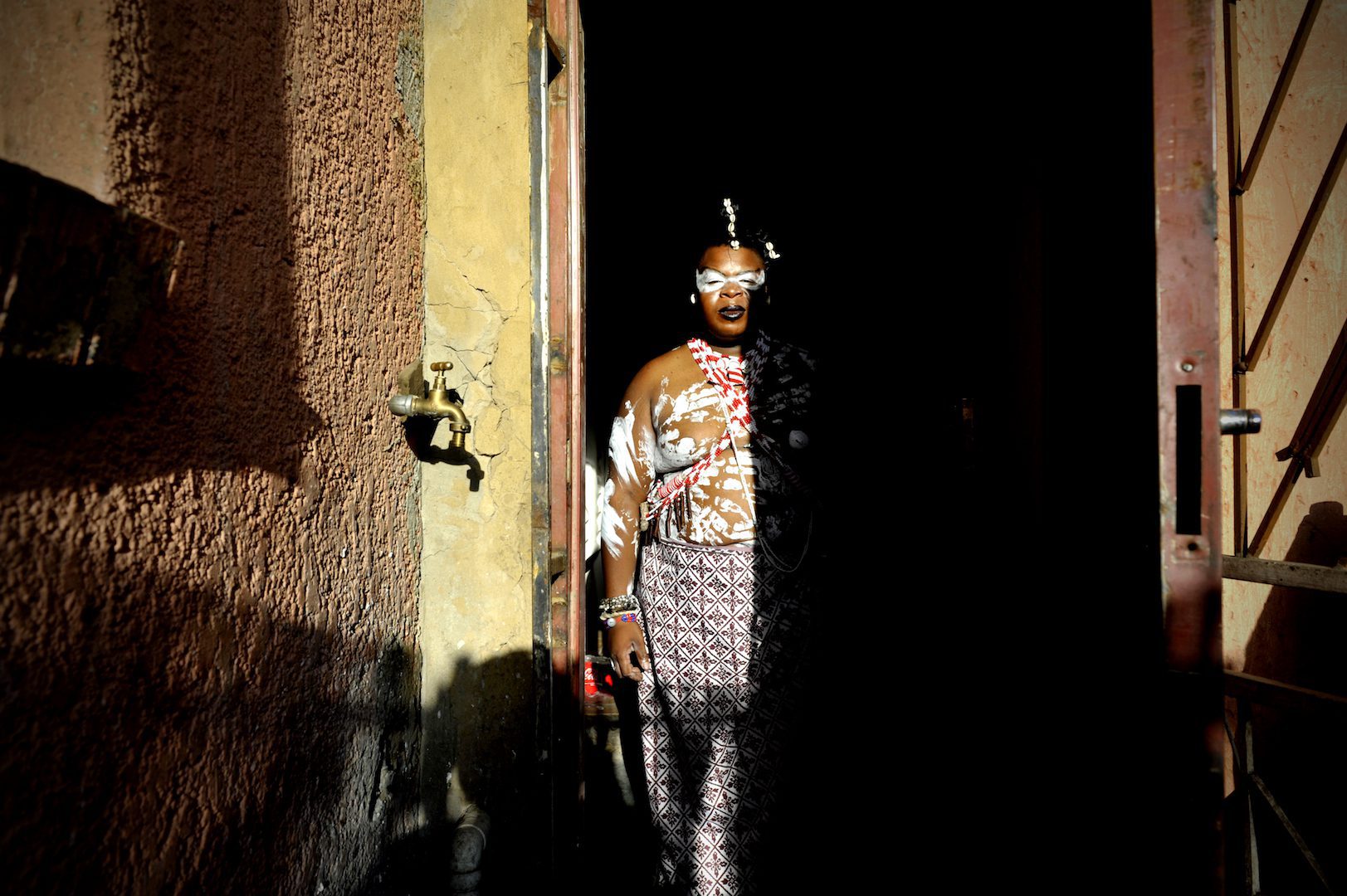 Positioning oneself is part of the day-to-day business of artists of African heritage. They can merely dream of nuanced images of Africa since there is still a great ignorance prevalent in the West. The idea of people being able to shift between Yoruba or Xhosa traditions and the urban chaos of cities such as Lagos, London or Johannesburg still hasn’t really caught on here. People moving between countries, cultures and continents more or less smoothly and still have one thing in common: in the West they have to contend with stereotypes on Africa, on the continent with social conventions.

On the morning of Albert’s performance the artist Thenjiwe Niki Nkosi is on stage at the Goethe Institute. This festival’s theme is the future of Africa, and she is talking about her women’s collective. Why did she join forces with other Black artists? “Because we simply need each other”, she says. “On our own we wouldn’t stand much of a chance in our country’s white patriarchal art field. This way at least we get some visibility.” Bit by bit she and her colleagues are carving out a space for themselves in relevant cultural locations in South Africa. They call themselves multipliers to emphasize the added value of their work. The collective rebellion against being monopolised by traditional thought patterns. “For us it’s not just about rhetoric”, Nkosi says. “We need to challenge the old structures if we want to work.” Analysing the stereotyping they are subject to is a survival strategy. For example with projects such as the mobile bookshop where stories about race, class and gender can’t be found in books but are told by people.

Their pop-up gallery in Soweto also relies on getting up close and personal. It’s no coincidence Albert is gyrating is fat belly in front of my nose that afternoon. In the few art spaces in Soweto especially tourists and whites from Johannesburg are to come face to face with a reality they are not familiar with. “Particularly the latter we literally have to lure here”, says curator Zanele Matsumi. “They still don’t venture into the townships naturally.” Matsumi believes these anxieties can, or actually need to be reduced by radical exchange. Otherwise nothing will ever change in terms of the tensions that are still high in their city. 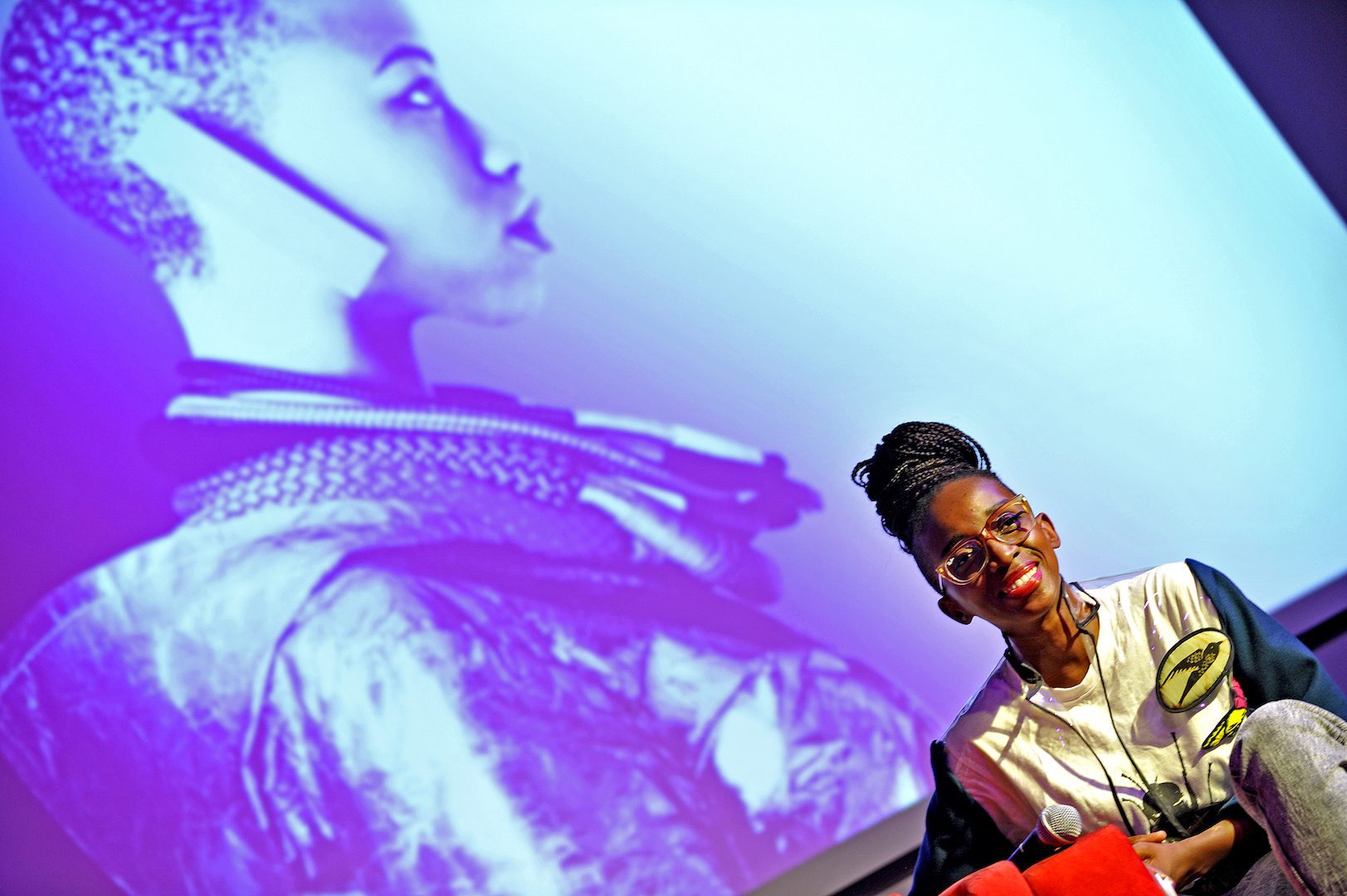 Speaking of anxieties. Europe could also do with new ways of responding to the diverse societies in Africa. And in at least a few cultural institutions this is gradually catching on. So far, financial dependency was the dominating factor in the relationship between African artists and Europe. Now the artists have a growing say in the collaborations, and western institutions are listening. This holds the potential of directing our attention from Black and white, African and European perspectives to the everyday life of people like Albert. In Johannesburg, where artists continue to be confronted with the still very present taboos and injuries of the past, at least the approach is no longer one-dimensional, also at the Goethe Institute. Here Albert doesn’t need to explain to anyone why he considers himself a cosmopolitan. After all, the other guests feel the same.

Thenjiwe Nkosi and I are standing in front of a cinema in the posh neighbourhood Maboneng. We’ve just finished watching the science fiction film about two man-eating dissidents from Cameroon. We’re talking about Audre Lorde and about how much we were both influenced by the concept of Black feminism. Amazement about all the things that connect two Black women from Europe and Africa. Suddenly we are joined by the film’s director. He overheard that my father comes from the country bordering his home country. “Oh, how lovely, a Guinean”, he exclaims excitedly. “No, that’s a misunderstanding”, I say by reflex after forty years in Europe. “I am German.” He looks at me with pity, placing a hand on my shoulder. “Come on, girl”, he says in a fatherly tone. “Now don’t be so white.”

I am so irritated I need a beer before I can laugh again. About never really being sure who is going to put which label on you. About the absurdity that I’ve been trying forever to convince my German homeland of my belonging even though my concept of origin goes far beyond the narrow definition of passport nationality. And about the fact I’m having a fit now because a Cameroonian is explaining my identity to me. Thenjiwe and I look at each other. Her mother is from Greece, mine from Hamburg. For the tourists passing by we’re all Africans anyway.

This feature was first published in ZEIT ONLINE.

Based in Berlin, Elisabeth Wellershaus is a journalist working as an editor for the art magazine “Comtemporary And” and others. She is a member of the “10 nach 8” editorial team.