Echoes – Fragments is the title of a group of twenty images that photographer Malala Andrialavidrazana presented at the festival Itinéraires des Photographes Voyageurs held from 1st to 30th April 2014 at Espace MC2A in Bordeaux.

Echoes – Fragments is the title of a group of twenty images that photographer Malala Andrialavidrazana presented at the festival Itinéraires des Photographes Voyageurs held from 1st to 30th April 2014 at Espace MC2A in Bordeaux.

Andrialavidrazana’s photographs are part of a larger series titled Echoes (from Indian Ocean), in which the artist has tried to create a portrait of the vast territory of the Indian Ocean. To do this she entered the homes and personal surroundings of the inhabitants of this vast geographical area of 75,000 square kilometres, stretching from the east of the African continent down to Australia, and bordered by Asia to the north.

What do these life locations say? What do they tell us about the people who live there?
Echoes…

From Antananarivo (Madagascar) via Mumbai (India), to Durban (South Africa) and the island of La Réunion, Malala Andrialavidrazana tries to capture the connections between the different countries, perhaps something that might constitute a defining idea of the Indian Ocean. She creates portraits, but not in the sense we usually understand the term. The human presence can be divined within her images, rather than imposing itself. What remains is what the artist likes to call interior landscapes.

Her intimate approach helps to counteract the dizzy sensation that hits us as we try to envisage what we have heard about this huge territory, and anchors us directly in the inhabitants’ daily lives. The artist’s viewpoint is clearly informed by her desire to avoid reproducing the clichés often rolled out about the territory. She emphases that, “The tourist brochures aimed at the popular class of Western consumers reduce the territory to a few hackneyed clichés about paradise islands where people can live the good life in tropical sunshine. Meanwhile the media only report on the catastrophes and disasters that affect their societies. In the end, the only thing foreign tourists remember seeing is that it is very beautiful but very poor.”

The project began with a work titled Ny Any Aminay, a Malagasy term conveying the notion of intimacy. This was the starting point that set the overall tone for the series. In these early photographs, all taken in Madagascar, the artist was already focusing on interiors. She then had the opportunity to extend this approach to other locations of the Indian Ocean, progressively building up her ambitious project. Through her friendship and professional network she was able to contact people and photograph their homes. Thanks to support from l’Institut Français and the National Arts Council of South Africa, she obtained a residence in Durban as part of “French Year in South Africa”. This is how the series Echoes (from Indian Ocean) finally emerged.

Parallel to this, the artist conceived a publication to give the series a wider audience beyond the exhibition venues where it was shown. The result is a bilingual (French/English) book published in November 2013 by Editions Kehrer. The book consists of a series of 74 colour photographs all taken in natural light. It is this light which creates the book’s general atmosphere and determines the reading rhythm. It invites readers to get immersed in the slow pace, and imbues the images with a nostalgic feeling.

This recalls the impressions created by an earlier photographic project the artist realised in Hong Kong. Titled Insomnia, its subject was the nocturnal wanderings of several immigrants in that great metropolis.

The atmosphere, with the feelings it evokes, recaptures the sense of seeing the films by director Wong Kar Waï before he went to Hollywood, during the period of Days of Being Wild. 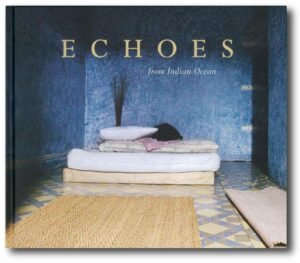 This is not the first time Malala Andrialavidrazana has adopted this perspective. Broadly speaking her work has always had a highly personal character. In fact, this creative method was already evident in her first series, titled d’Outre-Monde (From the Nether World).

This theme of this project, which was awarded the HSBC Prize in 2003, is burial spaces. Working on it took the artist to a dozen spaces, chosen, she says, for their cosmopolitan and multi-religious character. “What interested me,” she explained, “was looking at burial space located in a context of globalisation.”  She was more concerned with examining how places and cultures are superimposed than trying to find specific details. The project, which took her to countries including Argentina, New Zealand and Australia, combined reflections on buildings and sacred art.

The artist’s earliest photographic works already revealed her interest in working on a grand geographical scale which she tried to understand from the perspective of a topic that allowed her to link up different places and cultures.

Constantly tussling with the question of what constitutes the world, Malala Andrialavidrazana is mainly seeking to illuminate resemblances. She is interested in points of intersection rather than trying to highlight particularities.

Still, in her explorations the artist never forgets her concern with the issue of authenticity. After all, isn’t this the goal of anybody trying to get rid of clichés and preconceptions?

Even though we may travel across the world searching for connections, from the moment we choose to comprehend a subject from a very personal perspective we are necessarily involved in the quest for a kind of “truth”.   – Dagara Dakin

Based in Paris, Dagara Dakin graduated in art history and is a freelance author, critic and exhibition curator.