C& spoke with the curatorial team of the the Department of Painting and Sculpture at Kwame Nkrumah University of Science and Technology (KNUST) about the development of their institution and art teaching in Ghana. The team includes Artistic Directors kąrî’kạchä seid’ou, Kwaku Boafo Kissiedu, and George Ampratwum, and curators Robin Riskin, Selom Kudjie, Patrick Okanta Ankrah, Mavis Tetteh-Ocloo. This interview was conducted in July/August 2015 on the occasion of the multifaceted exhibition the Gown must go to Town…reflecting KNUST’s own history. Since then, the Department has held Cornfields in Accra (June – August 2016), an expansive exhibition of 80-artists which took its theme from Ghanaian writer Ama Ata Aidoo’s poem.

C&: When and how was your department founded?

KNUST Team: KNUST was established in 1961, succeeding the colonial Kumasi College of Technology, which was set up in 1952. However, the College of Art has a longer history than KNUST itself. It began in colonial Gold Coast as a small art department in Achimota (Prince of Wales) College in Accra in the period between the two World Wars where Kwame Nkrumah, who was later to become the first president of Ghana, was among the students of the first art master, G. A. Stevens (1). Before Stevens, there was a vocationalist curriculum called “Hand and Eye Work”, which was introduced around 1909. It was an outgrowth of Scandinavian Slöjd, the German Gewerbeschule and the Somerset House-South Kensington drawing-by-rote system of the Victorian era. Stevens, inspired by his mentor Roger Fry, had repudiated it in no uncertain terms. 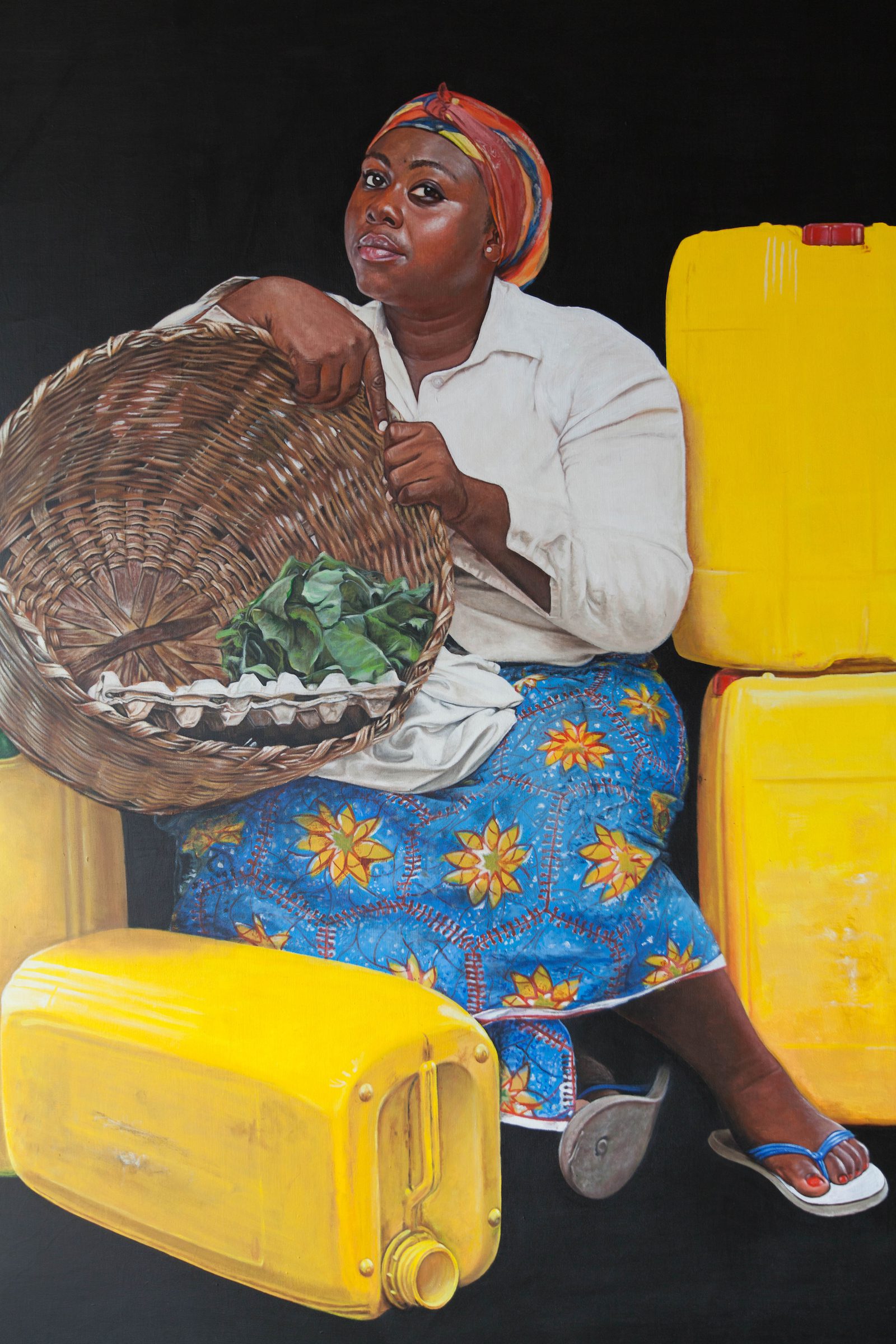 Jeremiah Quarshie, Manye, 2015. From the series Yellow is the Colour of Water. Acrylic on canvas, 122cm x 152cm. Courtesy of KNUST.

Stevens and Meyerowitz were among the most influential art teachers in late-colonial Achimota. The Meyerowitz School’s Malinowski-inspired instruction and art practice were instructive in fostering national pride in students like Kofi Antubam, E. V. Asihene, and J. C. Okyere, who became influential artists and teachers in the early post-independence era. Meyerowitz’s instigation was key to the “creative anachronism” which became an important feature of the official art of Ghana nationalists and of Nkrumah’s African Personality regime. However, in its depoliticised and commoditised form in the neo-liberal 1980s and 1990s, this feature became a placeholder for a new hegemony of touristy paintings, sculptures and artefacts in Ghanaian art schools and galleries. By the turn of the century, the South meets West exhibition in the Accra Museum had exposed the Kumasi College of Art as unprepared for the critical issues raised in contemporary art communities.

C&: And what are the developments in the department today? What do you envision to help shape the contemporary Ghanaian art scene?

KT: The College of Art at KNUST saw a small revolution in 1996. Students like Kwamivi Zewuze Adzraku, Papa Essel, kąrî’kạchä seid’ou, and Caterina Niklaus tested the boundaries of art practice and exhibition making, with works that at the time confronted the department’s official notions of what art could be—unannounced performances, silent happenings, textual paintings, poetic bricolage, exhibitions on trees, publicly posted political cartoons, etc. After this class graduated, a lapse, or silence, settled in, and radical ideas were quickly censored or tamed. 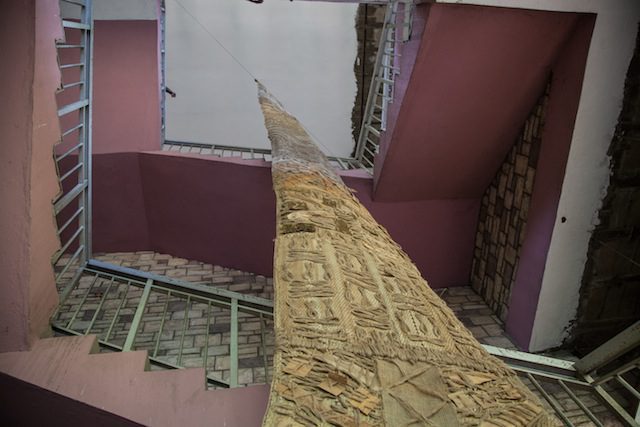 On his appointment as faculty of KNUST in 2003, the artist kąrî’kạchä seid’ou inaugurated an interventionist teaching project that he called Emancipatory Art Teaching, which had this component of a Foucault-inspired archaeology of the city. Each student had to curate his or her own show in a guerrilla-type end-of-year project. Exhibitions were held in uncompleted buildings, tro-tro cars, chop bars, hairdressing salons, workshops and garages, hotels, physical and virtual social networks, markets and shops, on public bridges and streets. The innovations which have resulted from this intervention in more recent years can be understood as resurrections of the unrealised revolutions of the pioneer MFA class of 1996 and their kindred spirits.

In the mid-2000s, kąrî’kạchä seid’ou found congenial collaborators among the younger faculty; namely, Kwaku Boafo Kissiedu (Castro) and George Ampratwum (Buma). With this team of collaborators, he set up a loose network of artists and art professionals practising outside the continent.

In order to sustain such ethos of radical experimentation and transform them into long-term practice and collective movement (2), we believe that the contemporary Ghanaian art scene needs a stronger infrastructure. This is why we’ve started blaxTARLINES KUMASI, a new project space for contemporary art. We aim to build upon and open up avenues for artistic and critical exploration, while probing and deepening modes and bases of knowledge.

C&: How do you engage with the students? To which extent are they encouraged to experiment with different media?

KT: Indeed the tag “Department of Painting and Sculpture” is a misnomer. As the exhibition the Gown must go to Town… shows, our BFA students have been experimenting with photography and video, digital art and new media, performance, sound and smell. Most importantly, they are attuned and sensitive to the materials and spaces of the environments that inform their work.

Experiments tested in the city of Kumasi oftentimes develop into deeper projects, and have been a great force in pushing students to make critical decisions on aspects of material, space, display, and exhibition-making.

C&: There seem to be strong ties between alumni students—like the artist Ibrahim Mahama—and KNUST. How would you describe the relationship with your alumni? And what kind of support system do you provide for graduating students?

KT: Our doors are always open to our past students, and many of them frequently come by the college to visit, chat on the notorious MFA block steps, or sit in on kąrî’kạchä seid’ou’s legendary lectures. Every year, we are able to keep a few of our promising BFA graduates as teaching assistants (TAs). The new MFA course in curating has opened up avenues toward ongoing dialogue with current and past students. We also keep connected through the annual OfKob Residency, started in 2013. In our exhibitions this year—both the Gown must go to Town… in Accra and Silence between the Lines in Kumasi—we made a point of including alumni at different stages in their practice: final-years, TAs and 2014 graduates, alongside lecturers and internationally established artists.(3) 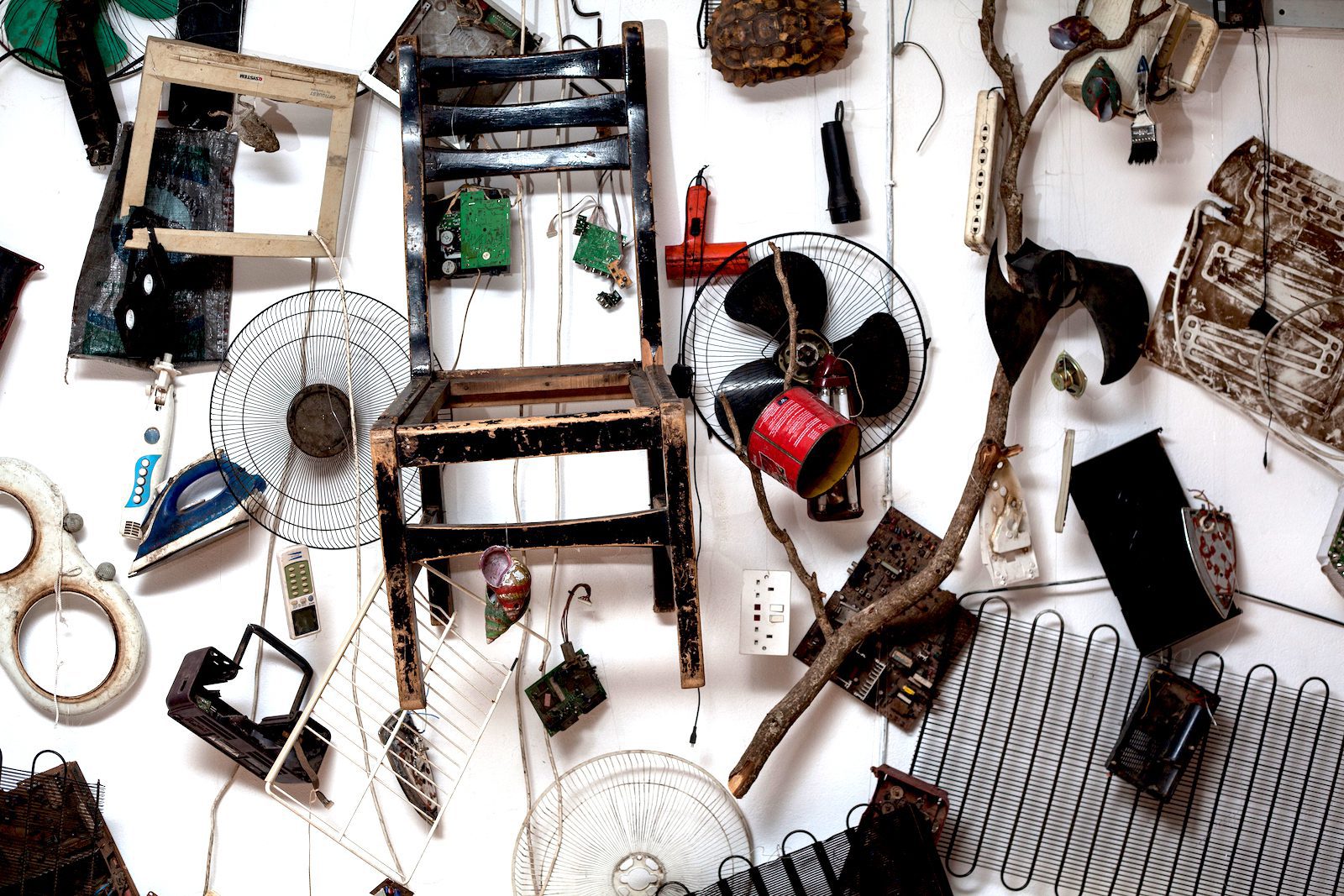 C&: Tell us a bit more about the end-of-the-year exhibition the Gown must go to Town… that was shown in 2015.

KT: Holding the exhibition at the Museum of Science and Technology in Accra provided us with an entryway to re-open past and present questions—in a monumental building launched under Kwame Nkrumah’s presidency but still under construction 50 years later. We made use of all these in-between spaces and corners in our curatorial tactics—sounds emanating from rafters, cloths overhanging exposed wooden beams, bicycle wheels tucked inside ceiling joints.

the Gown must go to Town… may be a birth of many beginnings, or it could be a return—to new turns led by past generations of KNUST artists and students whose work is silently present in these resurrected revolutions. Its spirit can be understood through kąrî’kạchä seid’ou’s re-conceptualisation of the Ghanaian Sankͻfa legend (meaning, “go back for it”) at Silence between the Lines: instead of a mythical bird who returns to a nostalgic idea of a forgotten past, rather, a looking back toward “futures yet to come.”

C&: What do you think of decolonial pedagogy and alternative forms of knowledge production and participation?

KT: As we’ve recounted, for decades the curriculum in the College of Art was premised on decontextualised and unexamined assumptions, some of which date back to the British “Hand and Eye” training in the Gold Coast (4). We try as much as possible not to flog dead horses. In recent years, we have had to reinvent our modes of learning and frames of reference, in order to stay in tune with radical shifts and transformations in discourses of art and knowledge. The question is not so much whether our pedagogy is decolonial or alternative, but how to get students to critically think and grow. 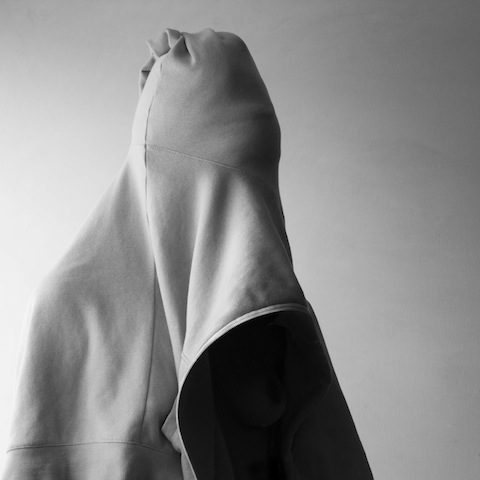 the Gown must go to Town, Gideon Amsah, Untitled 1 from The Cloth Series. Courtesy of the artist

C&: To which extent does Kwame Nkrumah’s philosophy come into play in the curriculum and your activities?

KT: Kwame Nkrumah’s concepts on African modernity certainly come into play in some of our curriculum’s modules and activities. But Nkrumah was a man of his time, so some of his ideas will definitely not work today. However, events of the 21st century demonstrate to which extent he was on point in affirming his absolute commitment to modernity, to the struggle against the privatisation of commons, to international liberation struggles, to the Non-Aligned Movement, and to the possibility of authentic revolutions in the face of a capitalist status quo. His concept of philosophical consciencism is a transcendental materialist philosophy which attempts a dialectical synthesis of pre-technical African humanist principles on the one hand and modern innovations on the other. He grounds this in Kant’s axioms of universal freedom and the “public use of reason”, which together form a theoretical underpinning for the Gown must go to Town….

(1). In the early 1920s, George A. Stevens was a student of Slade Professor Henry Tonks, the English post-Impressionist artist. His Art Department in Achimota is, arguably, the oldest in sub-Sahara Africa. Stevens mentored a number of colonial teachers in Africa. They include Kenneth Murray of Nigeria, Margaret Trowell of Makerere, Uganda and H. V. Meyerowitz.

(2). See Walter Benjamin’s Author as Producer. See also Okwui Enwezor’s productivist and Benjaminian thesis in his Artist as Producer in times of Crisis in which he argues for a collectivist imaginary which when actualized irrupts and transforms “traditional mechanisms and activities of artistic production…”

(3). Alumni often find themselves working together on exhibitions. For instance, Bernard Akoi-Jackson, Jeremiah Quarshie, and Dorothy Amenuke had exhibited at the Stedelijk Museum’s 2012 exhibition Time, Trade & Travel; and Ibrahim Mahama and Akoi-Jackson are showing at the upcoming exhibition “Material Effects” at the Eli and Edythe Broad Art Museum in Michigan this November.