A Sense of Wanderlust

The Importance of the African Motorcycle in Art

Serving as the symbol of freedom and Africa’s thriving economies, the motorcycle is a constant trope in the practice of many African artists. In this essay our author unpacks its role and significance.

It was a bright autumn day as I took a walk down Cape Town’s Roeland Street towards the Houses of Parliament. I heared a motorcycle grinding its way uphill in a barrage of noise. This is a constant sound on roads throughout the city.

The expansion of urban spaces across Africa has seen the rise of new networks. City dwellers can now weave through the traffic with only the tar and the horizon ahead. Motorcycles and bicycles are symbolic of the freedom and growth of Africa’s economy in the 21st century. It is therefore no surprise that this millennium has seen many artists from Africa utilizing these machines in their artistic medium of expression.

As Cape Town expands and more people move to urban areas, traffic congestion is increasing and with it the trend to beat it with more flexible vehicles. Each evening, the revolutions and revolts of motorbikes echo through Mowbray along the M5 byway as the violence-ridden metropolis is bled out in an avalanche of sound and surrender.

The story of Ernesto “Che” Guevara and his friend Alberto Granado who, 65 years ago, travelled from Brazil to Peru on a 1939 Norton 500cc motorbike named La Poderosa II (The Mighty One) is a powerful one. This journey of discovery figuratively opened up Guevara’s heart to the South American continent, as he bore witness to the dire situation of poverty experienced by millions. It set him on a path of non-cyclic revolution. The Weekend Telegraph inscribes this as “The vision of the noble loner, whether freedom-fighter or biker gives hope to world-weary revolutionaries and non-revolutionaries alike.” 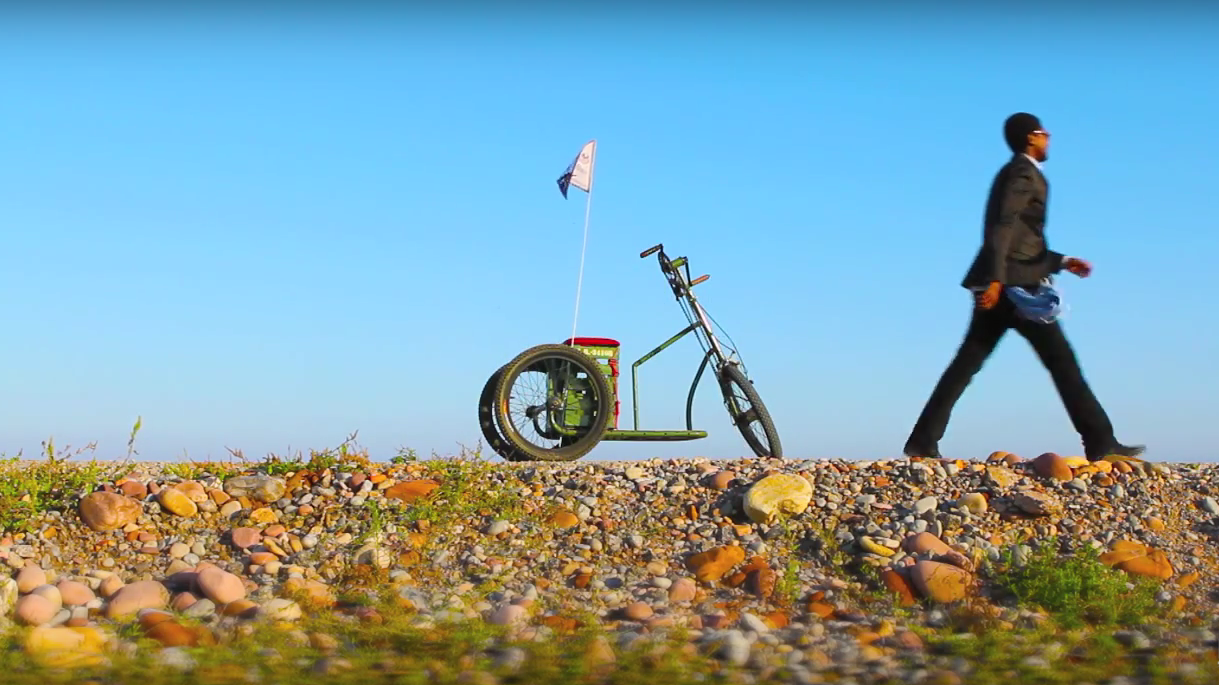 In his video, Bebi Beberei Bebendo, the Angolan-born, Belgium-based artist Nástio Mosquito rides across the city of Luanda. Mosquito was born during a time when various factions were fighting it out in Angola. Arms worth millions of dollars were being channeled into Angola from the West, the former USSR, and the South African Defence Force (SADF). The post-modern response of a young artist born in the throes of such tension is a multi-perspective, disparate interrogation of ideals. Mosquito’s Prisoner of Hope depicts two of his alter egos slowly moving from being out of sync to being in sync as each ego does a dance with its other half situated in the substructures of newly built roads and bridges – a non-space if you will.

Originally from Cape Town but based in Berlin, Robin Rhode has explored notions of chalk bicycles, drawn elaborately onto wall surfaces, eventually resulting in casting life-sized bicycles in chalk (Chalk Bike, 2015) and sunflower oil soap (Soap and Water, 2007). These quotidian materials are imbued with value, chalk being the substance utilized by so many teachers across the world, and the green Sunlight soap used by thousands of South African domestic workers and cleaners. It is the performative gesture of cycling – the potential in the performative action – that adds another dimension to the materials and the work situations associated with them. 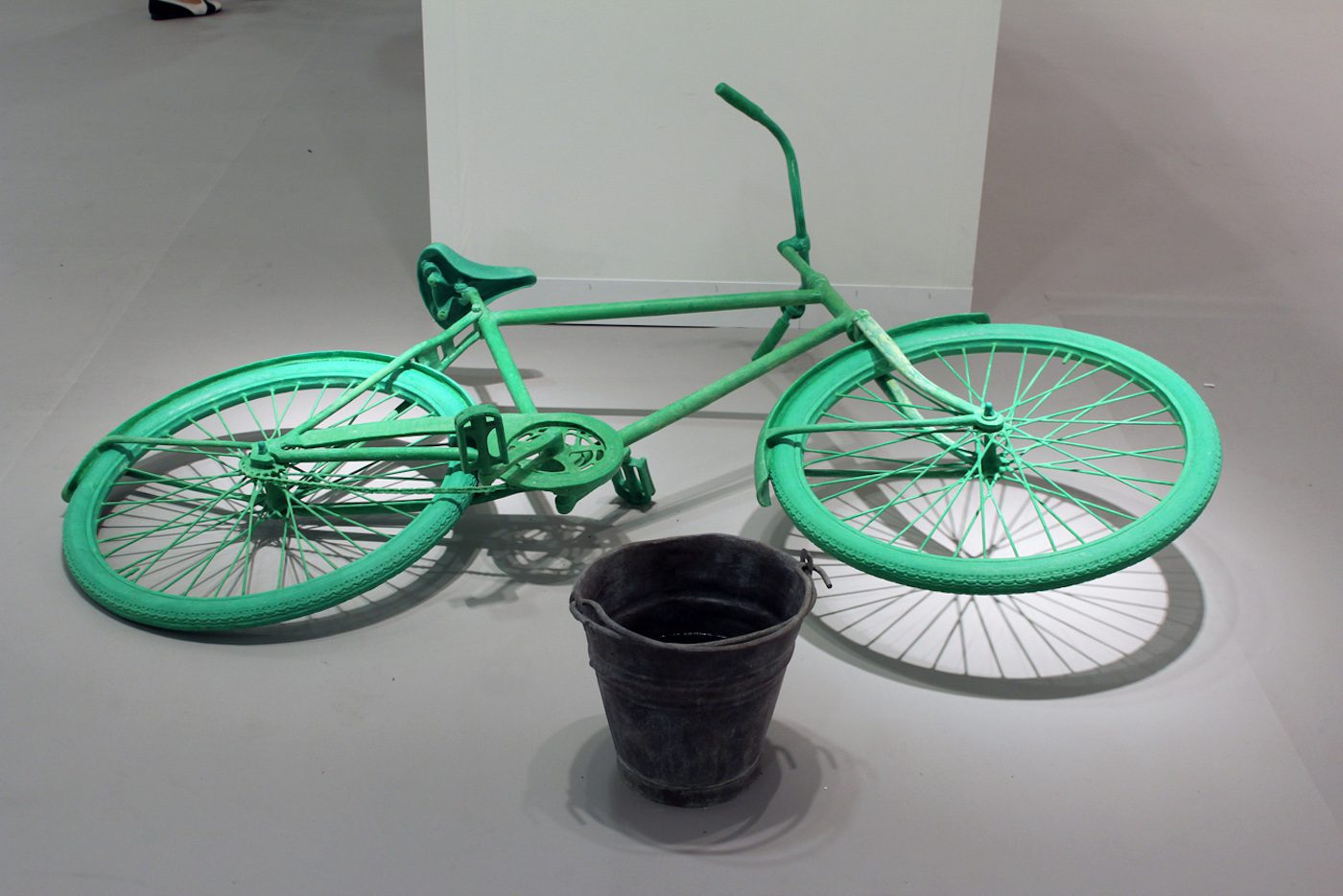 Equally, whilst symbolizing freedom, as made explicit in the American film classic, Easy Rider, motorbikes carry with them a potential risk and other negative consequences: carelessness, loss of self-consciousness and security, even the possibility of loss of life. And yet, the sense of African wanderlust vibrating across the continent remains.

In 2001 at the Gasworks Gallery in London, Robin Rhode performed Motorbike in a Duchampian gesture of fleeting brilliance. A motorbike is manufactured frame by frame starting with two flat wheels, growing into a full-scale motorbike with the performer balancing precariously on the handlebars. It is a situation of post-modernity as the viewer engages with the in-between blur of a real or imagined motorcycle. This videographed moment can be construed as a surrealist-inspired Dada object activation.

Rhode’s cycle rendition traces back to 1998, when the performer “rode” a bicycle drawn in chalk. He expanded the idea further in 2012/2013 with The Cycle of the Spiral, a 12-part piece featuring the performer pushing a ready-made white bicycle up a steep slope, an inverted concrete halfpipe, leaving traces shaped like crescent moons in his wake.

Aboubacar Traoré’s photograph Inch’Allah depicts a figure seated on a motorbike wearing eclectic-patterned trousers, flip-flops, a white shirt, a red-and-white checked scarf and a chain of beads wrapped around his wrist. Speaking to a hybrid fashion aesthetic, the Malian artist effectively trades styles in this post-altermodern paradigm of the 21st century. The black globe the person in the picture is wearing on his head is a reference to blackronauts, afronauts and Africans venturing into space travel. At the same time, the person’s identity is hidden or removed – which has a special significance in today’s image economy and social aesthetics. 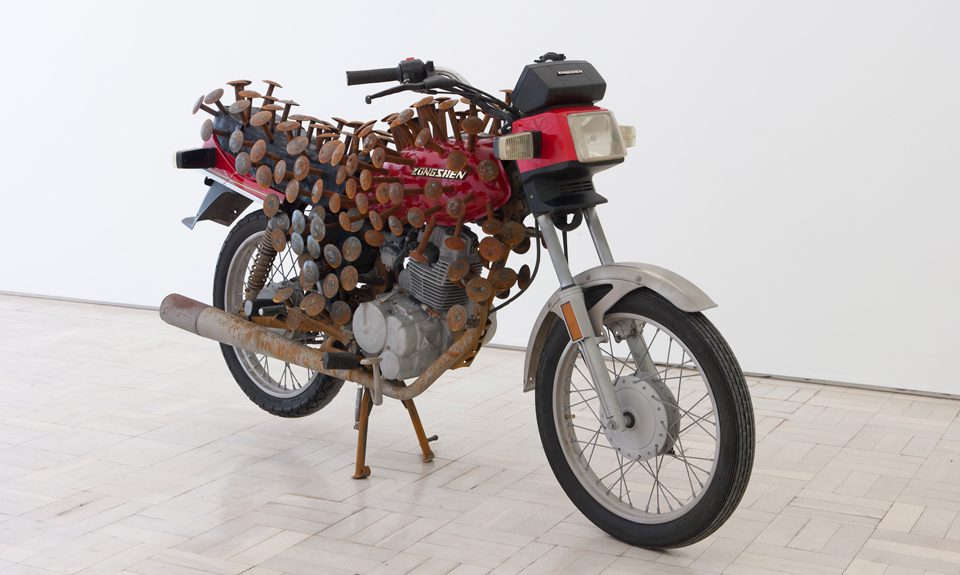 Adjective is South Africa’s newest art journal with a print-run of only 500 copies. The cover features Michael MacGarry’s 2012 Motorcycle Fetish, a red Zongshen motorbike studded with more than 50 rusted nails. The art piece featured in MacGarry’s 2012 show, The Other Half: Past and Future Now at Stevenson Gallery in Cape Town. At the time, the artist wrote, “My basic, animistic intent is to articulate and remake the products, objects and physical things I owned and experienced during my youth in the last century, [but] projecting, manufacturing and assembling these things for the second half of the 21st century – a time when I will be dead.”

Here MacGarry is activating the potential within the found objects that make up his assemblage and in so doing, paying homage to the production line and labor that articulated this artwork’s origin. The motorcycle may no longer be rideable, however, it is still valuable, as an altered object from the production line.

Stevenson also exhibited, elements of Meshac Gaba’s 2012 installation Musée De L’art De La Vie Active: Bibliothèque Roulante in 2013, featuring another red motorcycle with 66 number plates and a digital video. While 65 of these number plates were installed on the gallery wall, one of them was placed on the back of the motorcycle. In preparation for this art intervention, Gaba asked curators, artists, writers, art journalists, and critics for short statements on their contemporary art moment. Their quotes were then made into number plates and placed on the back of motorcycles, thus becoming a form of mobile communication across the city of Contonou in Benin, providing citizens with a mobile access to art without having to reada pamphlet or visit a gallery. The historian and curator Annemarie de Wildt’s quote reads, “Objects are orphaned when they enter the museum,” thus referring back to the motorcycle transported into an exhibition space, only missing its caste of formaldehyde. Furthermore, the motorcycle brought its message to South Africa, eventually ending its sojourn at the Stevenson Gallery in Cape Town.

The movement of a motorcycle embodies the sensibilities of freedom, growth, and independence. It exemplifies the character of young hustling, constantly on the move in search of new opportunities and fortunes with the scattering of dust beneath a sheltering sky signifying the only remains of the day.

Daniel Hewson is a young curator, writer and cultural collaborator from Cape Town, South Africa. Since graduating from Rhodes University he has specialized in curating in the visual arts field and arts education, with a particular focus on printmaking. He is deeply involved in Stanford Creative Works (SCW), an occupational and art therapy organization based in the Western Cape province of South Africa and funded by David Krut Projects.

Zen and the Art of Motorcycle Maintenance: An Inquiry into Values, 1974. Written by Robert M. Pirsig.

Prisoner of Hope. 2016. Directed and created by Nástio Mosquito.

In conversation with Tumelo Mosaka

Listening is a skill and we don’t do it enough