C& talks to young artist and curator Kwasi Ohene-Ayeh the use of flags, and what he sees in scaffolding.

C&: Did you have any kind of artistic influences in your childhood?

Kwasi Ohene-Ayeh: Growing up in Accra exposed me to many creative exercises and activities — in playful ways. I still remember some of the games we played when we fashioned tools from the midribs of plantain branches, sticks, tin cans, pen tops, socks, bottle caps and so on. I had a close friend at the time who was a couple of years older than me. Our families lived in a common compound house. He taught me how to draw. He was extremely skilled and I quickly became fascinated with drawing. He gave me drawing exercises to do — drawing comic book characters as well as those from my favorite cartoon series, Captain Planet. He, I would say, was the first influence and the person who opened me up to recognizing my artistic tendencies.

C&: You studied art at KNUST in Kumasi. Can you tell us a bit about your experiences there?

KOA: I enrolled at KNUST in 2005 and completed my undergraduate course in Painting in 2009. Before that, I was compulsively drawing from my childhood through to junior high school. I also studied Visual Arts in senior high school. What I had understood as art since my formative years was significantly challenged when I began my Painting program in KNUST.  Having met  kąrî’kạchä seid’ou  — a philosopher and lecturer who, along with the blaxTarlines KUMASI team, is transforming the retro-colonial curriculum of the College of Art in KNUST — radically shifted my understanding of art [practice]. In school I was not as gifted at painting as some of my other colleagues were.  I remember one day when one of my teachers found my paintings so repulsive that he gave me a harsh telling-off. I almost failed his subject. I took his critique very seriously, worked harder and then named my final year project “Untitled… [I Can’t Draw]” as a subtle rebuttal. I have, in 2015, enrolled into the MFA program at KNUST. 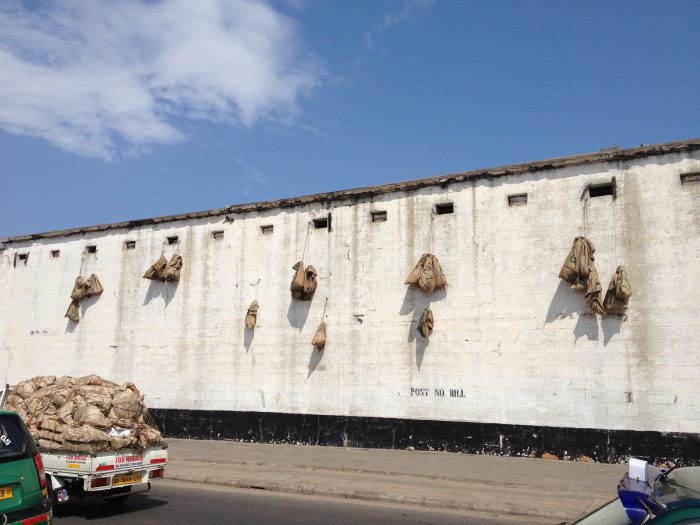 C&: Besides painting, you also use other media. For instance, what does scaffolding mean in your practice?

KOA: Thinking of alternative media and material to articulate an idea came necessarily to my way of working. This has led me to collaborate with architects, photographers, graphic designers, poets, dancers, painters, and sculptors.  My training in painting was a good foundation for what I consider a much broader multi-disciplinary practice today. I have been more drawn to painting as a metaphor than as an idiom. I think of the scaffold as an object that offers the potentiality of change or of  becoming.  Structurally, it is the accretion of several interconnected elements. It is itself always in the process of construction: never finished but always negotiating relations with other, more determined things. I read it as a metaphor of the old (or of something existing) transitioning into something else; something other than what it was.

C&: You were nominated for the Celeste Prize 2015 for your research series  Prison Anxieties. Please tell us a bit more about this ongoing project. When did it start?

KOA: I am grateful to the organizers and jurors of the Celeste Prize for having selected my work  Untitled (3) [Letter To The Sky]  (2014) — the third work in the Prison Anxieties series — as one of the finalist works this year.

Prison Anxieties is a research series I began in 2011. It primarily looks into the formation of the nation Ghana. I have been preoccupied with questions pertaining to my cultural heritage and history. I have become increasingly aware of the fact that when I claim to be Ghanaian, I am, by that proposition, categorically affirming the socio-historical, linguistic and political presuppositions underlying that form of identity (as would anybody else who expresses a similar sentiment from any other nationalistic standpoint). Ghana as a nation is a mid-twentieth century invention. Narratives of oppression, power, will for freedom, recognition of intrinsic rights, and desire for self-determination are some of the passions that produced this form of identity for all who are unified, bound and beholden to it. The research series seeks to open up, or perhaps interrogate, the presuppositions of my own national identity in relation to others in the world: studying its ideological foundations, myths, truisms, contradictions and so on.

I have made three site-specific installations and curated one exhibition so far in the series. At the moment, during my residency at Gasworks (London), I am continuing the series and speaking through the idiom of the flag as a symbol of nationalistic identification. The interesting thing about this research, I find, is that as I learn more about Ghana and about the world. 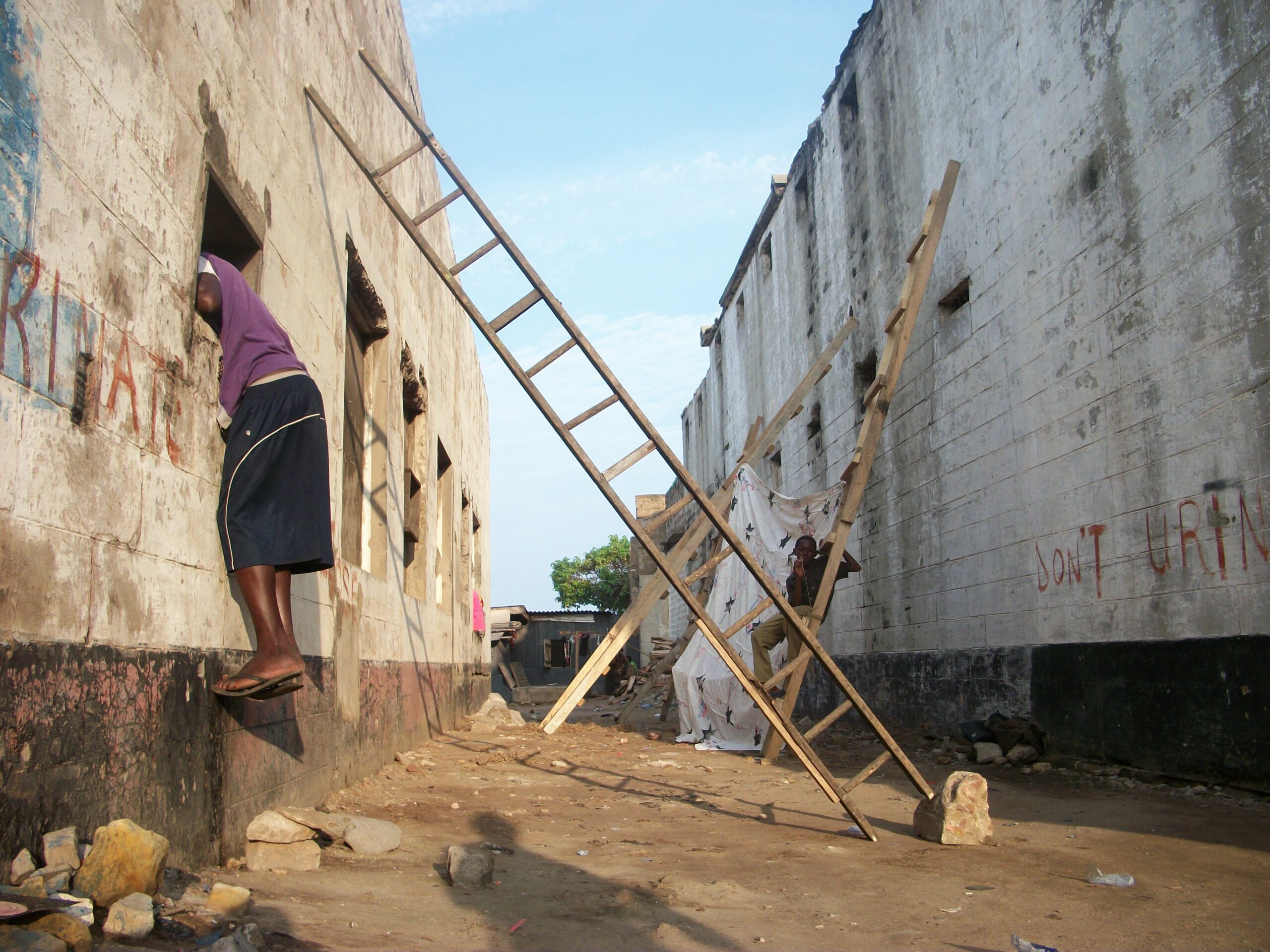 C&: Regarding flags, how would you define the use of these and other forms of nationalistic identification e.g. in the aftermath of the terrorist attacks in Paris in November 2015?

KOA: It was interesting to see the solidarity displayed around the world in support of France after the attacks. It brings Gilbert Keith Chesterton’s book Orthodoxy to mind, where in a chapter titled, “The Flag of the World”, he writes,   “The point is not that this world is too sad to love or too glad not to love; the point is that when you do love a thing, its gladness is a reason for loving it, and its sadness a reason for loving it more”.

Even though I am drawn to our contemporary use of flags and what they infer I am more interested in flag-making as a strategy of reconstituting, rethinking or perhaps reframing the existing order. The Asafo flags  —  which originated sometime in the early seventeenth century in the then Gold Coast  —  for me, constitute a powerful way of encapsulating  worldviews or ideologies within the composition of the flag form. They were originally distinct to the  ‘Asafo’ or the military factions of the different sub-ethnic groups of the Akan but later became adapted to specific moments in culture, for example  for festivals. The appliqué technique was used to piece different fabrics together to make the flag. It was not simply an object to be seen but one which offered a participatory and relational experience owed to its multi-sensorial mode of presentation; for example there would be a distinctly choreographed dance which could be accompanied by percussion and singing on the occasion of being presented outdoors.

So I am not so much interested in the instituted form of what we have come to know as the flag as a symbolic representation of a particular nation state, but in a flag whose formal and transcendental value offers more in terms of the fluidity to infuse and express newer, more nuanced ideas of what art [representation] could be. I would like to be able to explore that further, which is why I am appropriating and attempting to speak through the poetic and dense visual language of the Asafo flag.

C&: You are also a blogger. What does writing mean to you? And how do you navigate in the digital landscape?

KOA: I am not a blogger in that strict sense. I have a blog I have been authoring since 2010. I practice the use of my blog iubeezy as a kind of solitary room I can walk into, assume I am by myself and let that determine the content I produce there. Before I created the blog I had made short notes of things I wanted to write about, mainly music and personal anecdotes. I started by reviewing hip-hop and hip-life* albums, then it began to encompass my everyday experiences and then eventually my artistic ideas made their way onto the blog. I think of the blog now as the virtual dimension which affords me the space to test ideas and implement strategies of displaying my work. It is a sketchpad for my experiments with space and objects.

There is something about the written word that became fascinating to me as a visual artist after my undergraduate training at University. To express one’s freedom through writing can be a deeply fulfilling endeavor, and if art is the arena to assert one’s freedom and test its limits, then opening myself up to the many ways I could explore writing as part of my practice made sense to me. When I express my ideas in written form there is a feeling of concreteness that accompanies it. But words are imperfect and sometimes do a bad job at articulating what or how we feel. This paradox sustains my interest in writing (and language in general). I think of my work as questions or propositions that partake in a broader conversation. When we make paintings, videos, installations or even exhibitions, we are articulating ideas in tangible forms. Since it’s not of utmost priority to me what people see of my own work, as I’m developing ideas I often ask myself, how else a concept can be extrapolated and presented, and this leads to collaborations in the curatorial context.

*Music genre that developed in the early 1990s in Ghana. It is a fusion of hip-hop and local highlife music.