The Warp and Weft of Experience

C&: You are a Zimbabwean living in South Africa. How would you describe your personal journey moving from one country to the other?

Dan Halter: In Zimbabwe it was not possible to study art at tertiary level. Having Swiss heritage, I moved to Switzerland to further my art education. There I found myself quite culture-shocked and homesick and so I relocated to South Africa. Since then, government policies in Zimbabwe have caused its economy to suffer, and this has caused a mass exodus of people, especially into neighbouring South Africa.

C&: How do you see the creative and political interchange and connections between Zimbabwe and South Africa?

DH: Zimbabwe’s independence and transition to majority rule took place more than a decade before the same thing happened in South Africa. So, in many ways, South Africa looks to learn lessons from Zimbabwe and is reluctant to criticize or intervene in the situation there. There is a vibrant art scene in both countries, although in Zimbabwe there are limits to one’s freedom of expression. 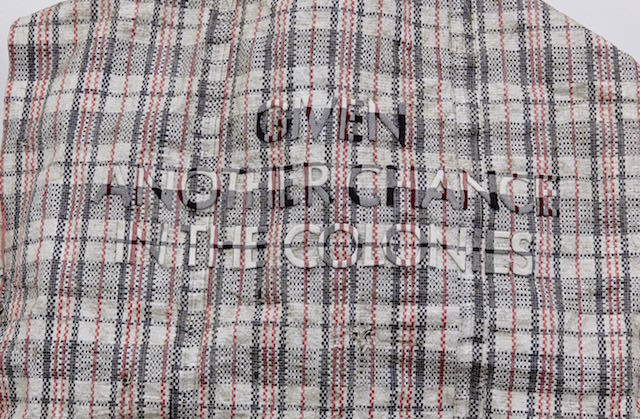 Dan Halter, Given Another Chance In The Colonies (detail), 2014. Found plastic weave bag with custom–woven tartan fabric. Courtesy of the artist and WHATIFTHEWORLD Gallery

C&: Tell us a bit more about your work Space Invader, in which you use woven plastic bags. You call them immigrant bags…

DH: The bags are cheap Chinese-made woven plastic bags that have become a stereotypical synonymous with migrants all over the world. Called bianzhidai in China, these bags have taken on different monikers around the world reflecting the immigrant demographics in different regions in a negative way.

The Space Invader characters were designed by Tomohiro Nishikado in 1978 and are simple 8-bit graphics that represent alien life forms. I have appropriated these minimalist icons as a metaphor for immigrants or aliens. Made up of about 50 pixels per character, these symbols are easy to create out of immigrant bags.

C&: In your artist statement, you use “fabric” and “fabrication” to define your body of work. Why?

DH: In my art the process of weaving is a form of fabrication and the end result can be described as a fabric. However, to fabricate can also mean to counterfeit and I like this dichotomy. The word illustrates my creative method and absolves me of the fiction of my work. 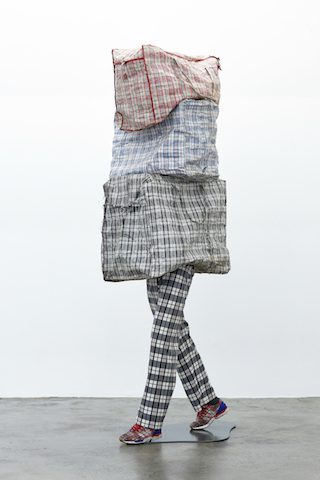 C&: In which way is your artistic practice political?

DH: In a way all art is political. My work may look overtly political but it is also deeply personal. The issues I deal with resonate deeply with me and I feel a strong desire to convey these matters to an audience. My art is political because of where I was born and where I have lived. Political concerns play a defining role in the life of the average citizen in southern Africa, probably more so than in more developed nations. It informs our culture.