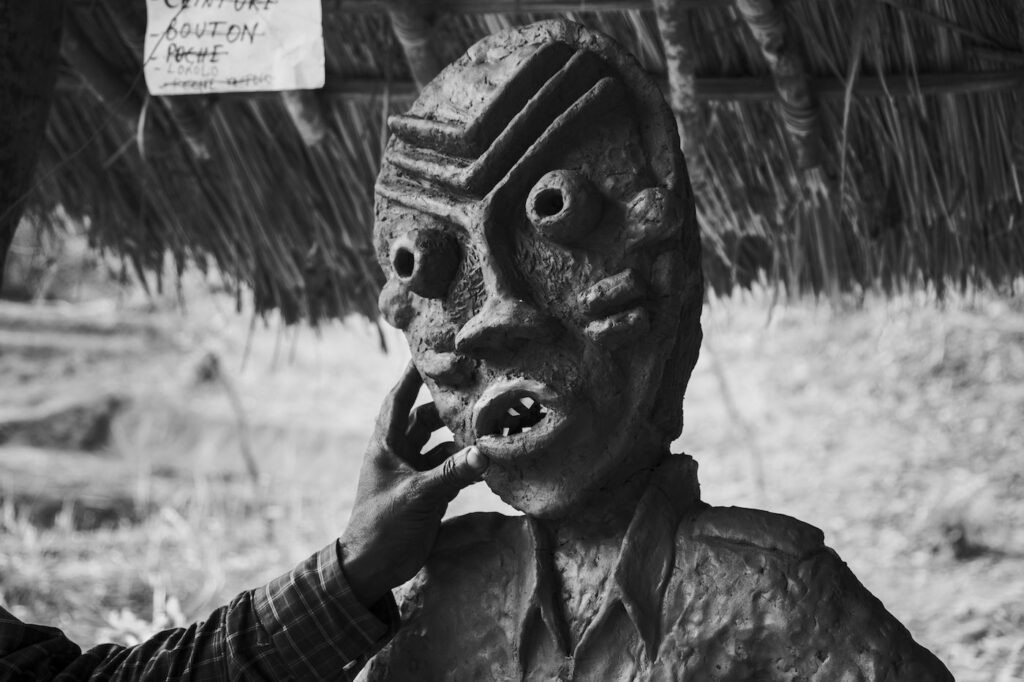 This book offers a first report on the activities of the CATPC in Lusanga (Democratic Republic of Congo).

A unique gathering of individuals, a physical space, a conceptual laboratory, the CATPC (as well as its members and all the people and partner institutions that accompany its work and are engaged in dialogue with it) is an exceptional contemporary experience for rethinking postcolonial power relations within the global art world. Renzo Martens, an artist based in Amsterdam whose radical and controversial practice feeds many current debates, and René Ngongo, a biologist and environmental activist, based in Kinshasa, initiated this cooperative, which today pursues its development independently and continues to redefine the relations between art, agriculture, industry and value creation.

CATPC (Cercle d’art des travailleurs de plantation congolaise) holds ao the complete version of the newly commissioned seminal essay by Ariella Azoulay: Plunder, The Transcendental Condition of Modern Art and Community of fabri; A history of the origins of the Institute for Human Activities (IHA) and all it’s entanglements written by J.A. Koster, biographies and stories of CATPC artists and it’s teachers Eléonore Hellio, Mega Mingiedi and Michel Ekeba and an interview with Renzo Martens.

We are especially proud to introduce the photo work of Léonard Pongo who added an extra layer to this book and pinned down a new set of visuals and iconography of work by artists in DRCongo.

“Renzo Martens has been active as an artist for many years, his work—controversial as it is—has been discussed all over the world and has been a source of ongoing criticism and debate. A great many articles have been written on the artist and his hybrid art in the most diverse publications: from articles in catalogues for group exhibitions and highly specialized art magazines, to pieces in readers on political issues, to compilations of provocative one liners and interviews in popular newspapers and tabloids. Still, there is no Renzo Martens monograph. This book is not about to change that. Instead, the book that you are holding in your hands takes as its focus the Cercle d’art des travailleurs de plantation congolaise (CATPC)—a major art project in Lusanga, a village located a day trip away from Kinshasa, the capital of the Democratic Republic of Congo (DRC)—that, although inspired by Renzo Martens, has been developing its own identity ever since its foundation in 2014.”

“Together with my co-editor Eva Barois De Caevel—who is also co-writing this introduction—I decided to try to make an unpretentious book about the CATPC, one that could respond to the following questions: how has the CATPC come to be, who are its protagonists, what kind of art is made, who are the artists, where does their art finds its roots historically, what is the (pre/post) colonial history of Lusanga village (where the artists work; Lusanga was formerly Leverville, a colonial town created by William Lever in the early twentieth century, the first plantation for and origin of the capitalist multinational Unilever), how does Lusanga relate to Kinshasa and to the world outside of it, how does this project find its way to and how is it received by the global art world, how does it critique this global art world and its museological, historical, and temporary practices, how is it entangled with theories of decolonization, and what is the role of Renzo Martens in all of this? In trying to answer all of these questions we have given voice to as many people as possible. Each of them speaks from their own location, position, language, and background about experiences with the CATPC and formulates their questions and points of view from their specific locations: be it Lusanga, Kinshasa, Brussels, Paris, Amsterdam, Berlin, or New York.”

“There are many ways to write a book on the CATPC, we have chosen to take a horizontal approach and to first give voice to the many persons who make the complex endeavor that is the CATPC possible. These are the artists of the CATPC of course, and the leading artists of the CATPC workshops (Mega Mingiedi, Eléonore Hellio, and Michel Ekeba), along with Renzo Martens and Jacob Koster, and ourselves as the editors of this book. It was also important to us to widen the discussion by inviting authors whose thinking on some of the questions raised by the existence of the CATPC is crucial: Ariella Azoulay and Françoise Vergès offered us deep insights through their contributions. Finally, it seemed essential to have a visual approach to the CATPC, and to whom the people involved are and what their environment is. Consequently, a rich iconography completes this book. Photographer Léonard Pongo was especially commissioned to take part in its constitution. His images are truly one more voice added to this publication. The book is published in two languages, French and English. Original versions of the texts come first, followed by their translations. For each text we have indicated where it was written and when.” (Els Roelandt and Eva Barois De Caevel)

Eva Barois De Caevel  (based in Paris) is an independent curator, writer, and researcher. She works as a curator for the art center RAW Material Company (Senegal) and is the coordinator of its new educational programme, the RAW Academy (Senegal). Eva works as an editor for the Institute for Human Activities (DRC, The Netherlands, Belgium). She is a founding member of the international curatorial collective Cartel de Kunst.

Els Roelandt (based in Brussels)  is an art historian. Before working as an editor at KASK/School of Arts, Ghent, she was co-founder and chief editor of the internationally renowned A Prior Magazine (1999-2012). She has been working with Renzo Martens for over six years.

The publication CATPC (Cercle d’art des travailleurs de plantation congolaise) is part of an artistic research project initiated by Renzo Martens, affiliated as a researcher to KASK/ School of Arts Gent, 2012-2016. Martens’ research is financed by the Arts Research Fund of the University College Ghent.

Presentation at The SculptureCenter, New York on the occasion of CATPC’s solo show (29 January – 27 March 2017)