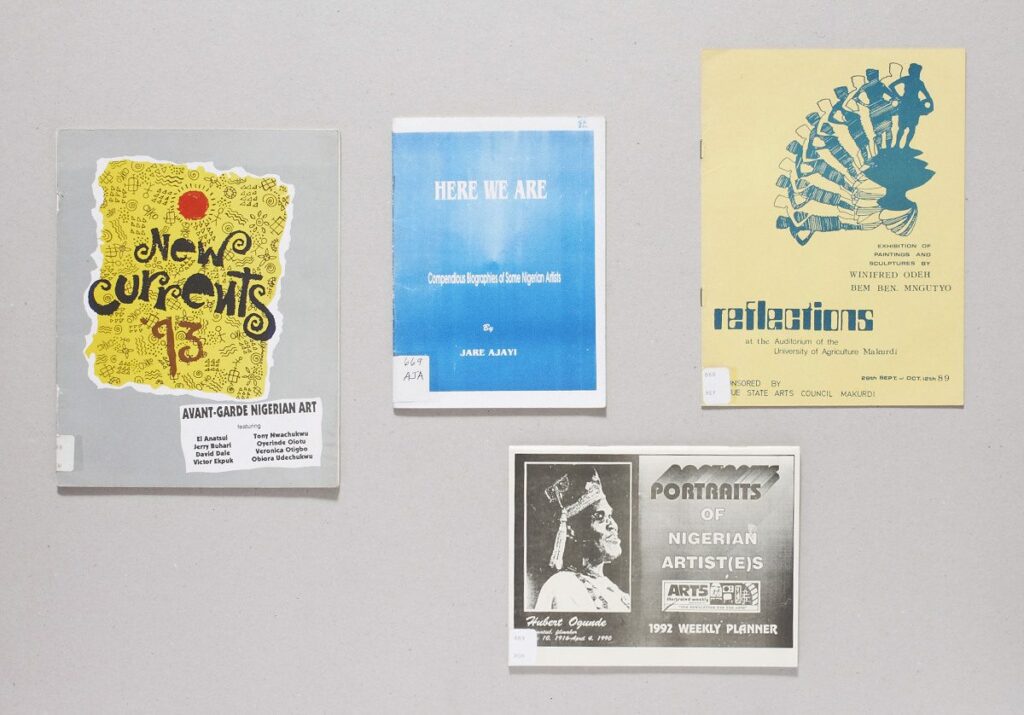 Take a look into libraries and book collections holding some of the rarer and often forgotten publications, which are nonetheless essential to the discourse on both sides of the spectrum. Featured this time: The Stuart Hall Library at Iniva  (Institute of International Visual Arts) in London.

From the library’s collection we present a rare, unique selection of pamphlets featuring the contemporary art world of Nigeria over twenty years ago (find a detailed list of the titles below):

‘What librarians and archivists usually categorize as ephemera – exhibition guides, pamphlets, and leaflets – are rarely collected systematically. But often they are the only publications that give a unique glimpse into what was happening within a group of artists or an art scene.  They can reveal not only what was being exhibited, talked about, and seen, but also the networks of people and ideas behind the movements and their overall context, in ways that other sources cannot. The ‘ephemera’ here offer a remarkable window into the contemporary art world of Nigeria in the late 1980s and early 1990s, when the program of economic austerity embarked upon in 1982 had wrought havoc with the Nigerian economy and in Africa more widely, radically altering the organization and modes of art production. These documents reveal the contexts and early work not only of figures such as El Anatsui, who has gone on to become a star in the global contemporary scene, but also of other artists and scholars, who deserve more recognition.’

Reflections  –  Exhibition of paintings and sculptures by Winifred Odeh and Bem Ben Mgutyo at the Audiorium of the University of Agriculture Makurdi, 1989.

Towards 21st Century Art: An exhibition of painting, sculpture, ceramics, graphics and textile by the staff of the Auchi Polytechnic: including Idugie, Nimitie, Ogieriakhi, DeBeBs, 1990.

The Stuart Hall Library is a valuable reference resource for students, researchers, and all interested readers and is one of the leading UK libraries in the field of international visual art. The library holds a substantial collection of monographs, catalogues, periodicals, DVDs, CDs, slides, and other media on visual arts and culture. The collection has particular strengths in African, Asian, and Latin American art, as well as British art from artists of diverse cultural backgrounds. The collection includes over 4,000 exhibition catalogues, 1,000 monographs – covering cultural, political, gender, and media studies – and over 140 periodicals.