Created in 1950 at the initiative of French Protectorate (1912–56) officials, the Casablanca Municipal School of Fine Arts constituted an active tool of colonial policy.  At the school, the colonial authorities established a teaching system whose underlying approaches to cultural heritage aimed at preserving artisanal crafts. The focus of Moroccan students’ professional instruction was placed on applied arts: carpentry, architectural drafting, and other disciplines directly linked to useful skills for developing new towns and cities. As far as painting was concerned, Late Orientalism was the enforced academic model. The purpose of the new institution was to expose students to an iconography that was both attractive and reassuring for a country on the road to civilization – which the students were then to reproduce. In 1962, when the artist Farid Belkahia (1934–2014) was appointed director, Morocco had been independent for six years but the colonial vision had endured.

Beginning in 1964, Farid Belkahia assembled a teaching staff consisting of the artists Mohammed Chabâa (1935–2013) and Mohammed Melehi (b. 1936), the art historian and anthropologist Toni Maraini (b. 1941), and Bert Flint (b. 1931), a fervent researcher of popular arts and rural traditions. Their project of artistic and social reform was supported by a multidisciplinary educational program based on the complementary value of theoretical lessons and formal experimentation. The program emphasized studying and re-appropriating popular and traditional artistic heritage as well as rehabilitating the figure of the artist-artisan in keeping with both the national artistic tradition and Bauhaus principles.  This reform led to the inclusion of previously nonexistent content in the curriculum. In 1965, the program grew, adding its first course of art history directed by Toni Maraini along with painting and sculpture studios directed by Mohammed Melehi, who was also entrusted with a photographic research. In 1966, Mohammed Chabâa opened a graphic arts studio. Alongside their dedication at the school, that same year, Belkahia, Chabâa, and Melehi presented their recent work – complemented by Toni Mariani’s writings – at a collective exhibition in Mohamed V Theater in Rabat. This exhibition marked the birth of the “Group of Casablanca.” Under Farid Belkahia’s leadership (1962–74), the Group of Casablanca developed a reputation for its innovative teaching that rejected the Western academic legacy of easel painting in favor of an abstract artistic vocabulary, an approach that subscribed neither to the formalist tradition, nor indeed to any preexisting movement. The foundation of their pedagogy lay in the necessity of reformulating the revolutionary radicality of historical avant-gardes while remaining aware of the cultural and historical traditions of Morocco and its Berber, Arab-African, and Mediterranean components . 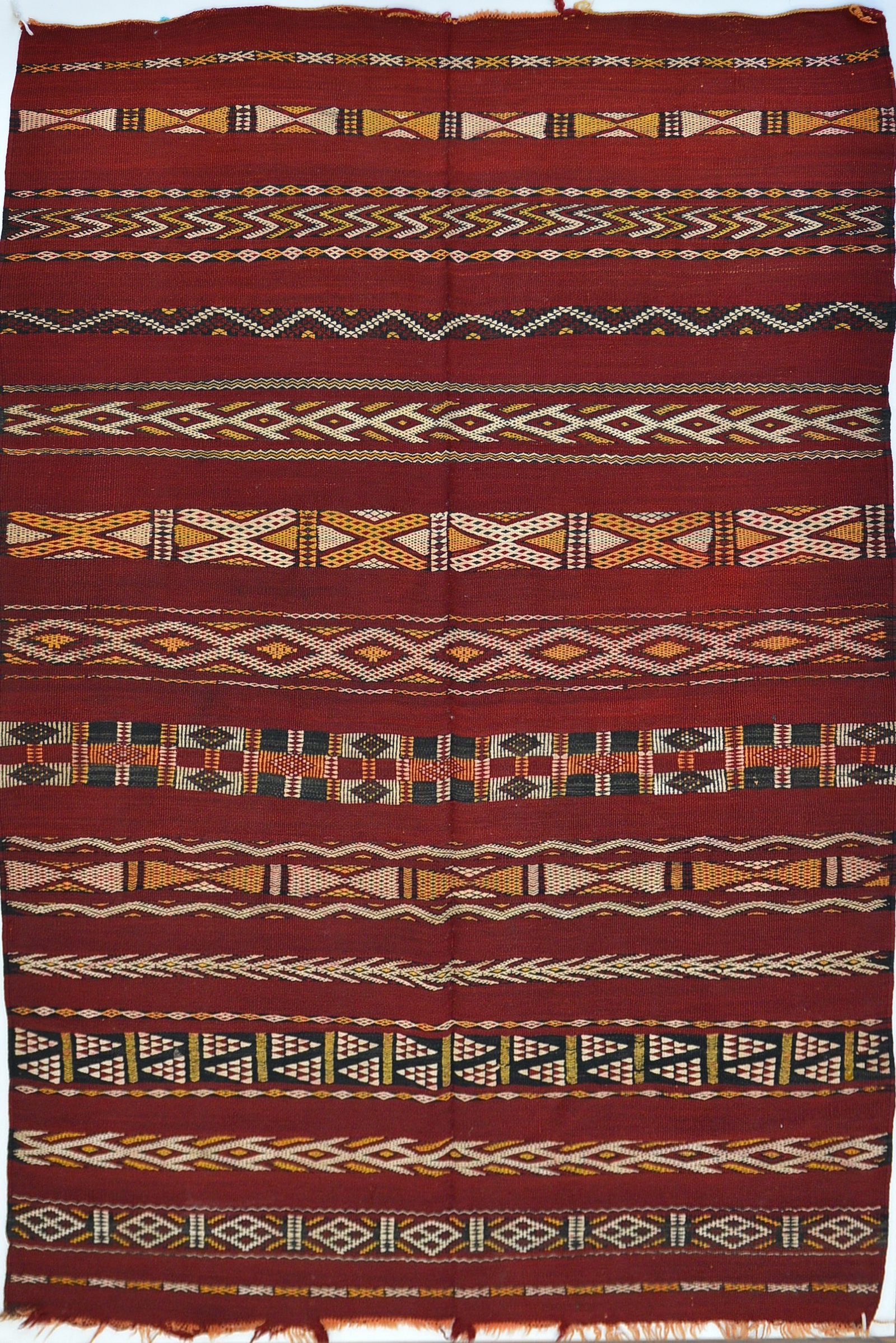 The policy of preserving craftmanship pursued by the administration of the French Protectorate in Morocco was based on a selective identification of heritage – methods of taking inventory and categorizing traditional artistic practices – that had impoverished appreciation for these practices’ use and erased the social framework of collective memory contained within them. Opposing the notion of craftmanship, which is anchored in concepts of indigenousness and aboriginality, the Group of Casablanca advocated the use of a more concrete and less ambiguous term – popular arts, rural and urban – whose dynamism and innate expressive power they revealed in order to affirm their role in elaborating an artistic modernity that maintains its ties with the past. The term popular arts, rural and urban, designates a wide spectrum of artistic production – basketry, carpet weaving, textiles, and jewelry – produced by a set of manual skills that, by the mid-twentieth century, were disappearing. The magazine Maghreb Art, edited by the Group of Casablanca, Toni Maraini, and Bert Flint, devoted three editions highlighting their historical, aesthetic, and semantic foundations.

The rise of civic awareness and the emerging notion of public liberties after Moroccan independence had an impact on artists, their social function and their presence in the public sphere. The artist became the producer of a social and cultural project, in which art was expected to become a space of shared knowledge. This project was founded in a strategy of collective visual education that called for re-appropriating collective heritage by seeking suitable forms for conveying local artistic sensibilities and universal content, assigning value to the functionalism of the national artistic tradition, and integrating art into architecture and public space. Hence, collective visual education aimed at emancipating viewers and encouraging their contribution in the democratization of culture.

Individual or collective practices for integrating artworks into public space sought the direct involvement of  the public without any intellectual prerequisites. These new practices signaled artists’ presence on the street and attested to their desire to conquer a territory liberated from the norms of museums and the dictates of the art market, which still reflected the bourgeois taste for Late Orientalism. Public space was to become the analogon of modern artistic creation that would break with all exclusions, whether traditionalist, institutional, or commercial. Public space was claimed because it had the greatest reach, but also because it represented a territory of liberty. It made reference to two types of spacial entities: 1) A physical territory – a wall along a street – that became a site for inscribing interventionist practices. The most memorable act remains the “manifest exhibition” of 1969 on Jamaâ El-Fna Square in Marrakesh, which was followed by another event organized on 16 November Square in Casablanca. 2) A symbolic territory – editorial space – which is a territory of action and discourse where artists can assert their theoretical, artistic, and political position. From 1966 to 1971, the Group of Casablanca contributed with Abdellatif Laâbi, Mustapha Nissaboury, and Mohammed Khaïr-Eddine to the renewal of and the dialogue between literary and artistic practices in the left-wing cultural review Souffles.

Fatima-Zahra Lakrissa ist art historian and works at Musée Mohammed VI, the museum of modern and contemporary art in Rabat.

Salma Lahlou is independent curator and founder of ThinkArt.

This article was first published in the latest C& Print Issue #7. Read the full magazine here.