Black Matter is an installation by Oxossi Ayofemi that brings together political aspects of Black life and the more esoteric notion of the blackness in the universe. Nan Collymore writes about the work, which was conceived in collaboration with physicist Risa Wechsler at the Contemporary Jewish Museum in San Francisco.

Oxossi Ayofemi, From the series Untitled (Dark Energy), 2017. Notes for Performance. Dimensions Variable. Courtesy of the artist. In That Case: Havruta in Contemporary Art–Oxossi Ayofemi and Risa Wechsler on view July 26, 2018–July 30, 2019 at the Contemporary Jewish Museum, San Francisco.

Dark matter is only visible as a flow.
We can find it in the movement of the stars, or when particles collide. Its presence can be revealed by how a body spins, by transformation.

Dark matter: akin to invisible dust, like a halo around stars, a shimmer around galaxies.

The opening gambit of music video This is America (2018), Childish Gambino’s excoriating set piece, disturbs and thrills. It features excessive violence, madness, and frenetic movement that bring us to a celebration; it’s an apotheosis of what the US was and continues to be. His topless body jerks and swings, and his uncomfortable grinning and twisting invites fear, applause, and devastation.

The Black body in the US lives a precarious existence, always teetering on displacement and death, and turf dance – a form devised in the late twentieth century among Black communities in the city of Oakland – is partly a creative response to the violence of everyday life and partly an expression of breaking form and ushering forth new linguistic opportunities.

Likewise, artist Oxossi Ayofemi captures young Black male bodies in public spaces moving from traditional to post-modern forms of dance. Black Matter incorporates glissade and contorting limbs as performative structures that butt against the idea of conforming to mainstream models of dance, while borrowing from them. 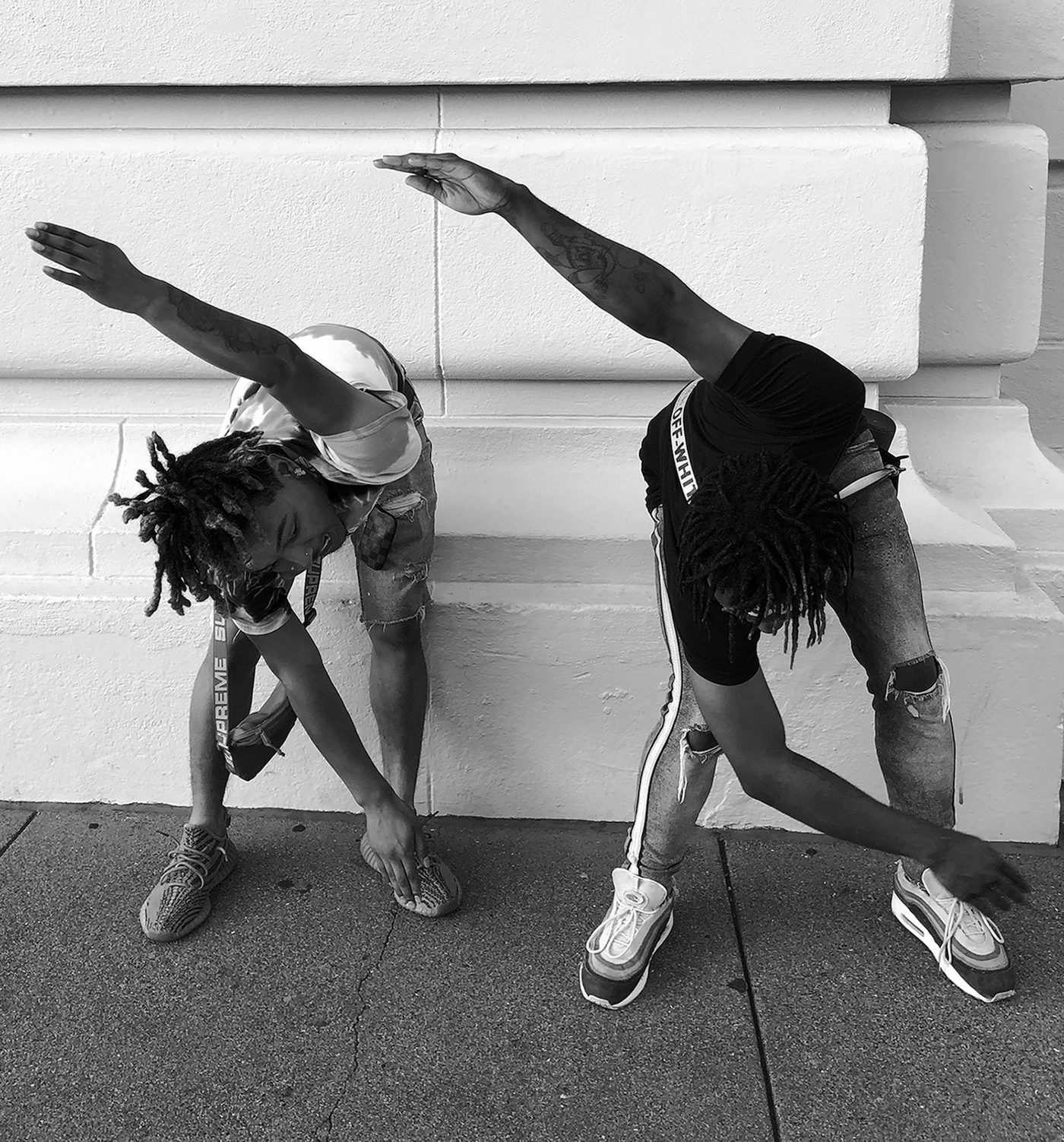 The compact installation at the Contemporary Jewish Museum in San Francisco is an assertion of Ayofemi’s utopian approach to cultural expression. It is carefully placed in a corridor, easily missed and yet satisfyingly casual and reflective of how we can meet art anywhere. Her practice stems from the connections between things – subject/object, movement/stasis, form/disruption. Around the theme of the work’s title, she brings together elements of performance, text, and video to address notions of Blackness, being, and space.

Still and moving images, in black-and-white and in color, portray a California-specific Blackness. Ayofemi is an artist whose lens is cast on the local and she achieves this beautifully with an artful blend of performance, movement, and audio as black bodies move in transit from Oakland to San Francisco on public transportation.

The bodies move in a fluttering, spasmodic style and, in this arrested space, they replicate the glitches that we experience in our digitized world. Turf dance employs narratives that act as  disruptors of hetero-patriarchal discourse, a way of living within Black life that embraces the glitch of oppressive forces. The dancers carefully include this into their routine as a reference to the impossibility of avoiding the digital landscape that permeates the Global North. Their stuttered movements correlate with the idea of spinning off into space, being pulled by unknown forces and dragged into a parallel sphere, one that is more expansive and one that offers a possibility to inhabit a “Black radical imagination.”

Taken at its most literal, Black Matter is a play on the words “Black Lives Matter” and, seen through that lens, the work renders the dance narrative as a response to the brutalizing effects on the Black body in the US. The title brings together the political aspects of Black life and the more esoteric notion of the blackness in the universe that surrounds but confounds us. 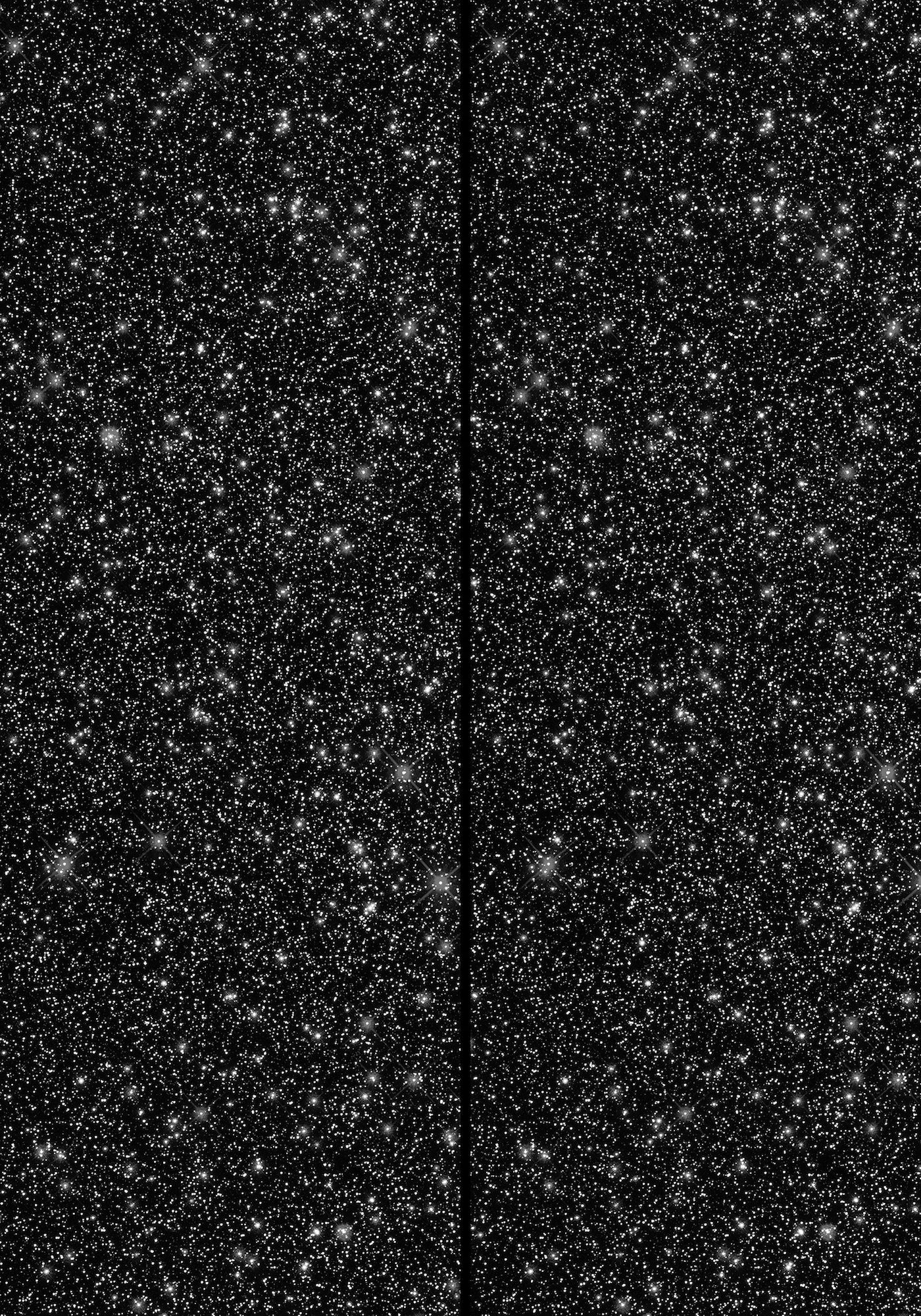 The way light and dark is conducted throughout Ayofemi’s series of images is a reference to the cosmology of the universe. Havruta, the thematic around with the museum commissioned this show, is a tradition of Judaism that focuses on friendship and community, specifically a working through of Hebrew texts between two people. For this, Ayofemi chose to partner with physicist Risa Weschler from Stanford University.

It would be easy to position Ayofemi’s work in the oeuvre of Afro-futurism. It contains all of the necessary elements: the cosmic, the cultural expression of Blackness through movement, sound, and visuals, the discourse on Black futures and its connection to a fictional narrative that gives the Black subject the potentiality for escape. But Ayofemi is solidly in a space which sidesteps such solid parameters; her work is more suggestive and requests a freer application of thought, one not determined by being outside of the blacknorm, but able to navigate and play around with labels and externally imposed categorizations.

The Still 5 (Star field) photograph is a deconstructed work of intensely glittered panels that are connected yet distinct. This work speaks to the invisibility of the Black feminine creative subject, something that Evelynn Hammonds and Michele Wallace address in their essays Black (W)holes and the geometry of Black female sexuality (1994) and Variations on Negation and the Heresy of Black Feminist Creativity (1989), respectively. The black (w)hole is a counter to the idea that the black hole is a space of emptiness and vacuum; it posits that the hole is not broken, but full and complete. Likewise, Ayofemi’s work is suggestive of wholeness, infinities, and continuum.

In That Case: Havruta in Contemporary Art—Oxossi Ayofemi and Risa Wechsler continues at the Contemporary Jewish Museum in San Francisco until 30 July 2019.