When discussing art and culture, capitalism and neoliberalism are often overlooked. This in turn contributes to a hierarchy in Pan-African representation, maintains C&'s deputy editor Will Furtado.

When asked if he’d consider adapting one of his exhibitions to its particular location, Arthur Jafa unequivocally says no. And – aside from that being his right as an artist – he has a point. Currently Jafa has a large show at Berlin’s Julia Stoschek Collection (JSC) in partnership with London’s Serpentine Galleries, where the artist showed last year. Both iterations of A Series of Utterly Improbable, Yet Extraordinary Renditions deal heavily with race issues specific to the North American context, in the form of intricate video montages with a cathartic quality. “I want to make black cinema with the power, beauty, and alienation of black music,” said Jafa in Interview magazine last year about Love Is The Message, The Message Is Death, a video containing found footage of Black sorrow and success, arranged to Kanye West’s Ultralight Beam.

For Jafa’s work to adapt to a particular location or context, especially internationally, would mean the standardization and simplification of the Black experience. And by extension the erasure of the Black experience – in this case in Europe, where his work is being shown. However, from a curatorial point of view that’s also exactly what’s at stake when curators in Europe give more exposure to non-European artists when curating shows that engage with race issues.

The prominence of African Americans in the arts at times seems to overshadow art made in Africa and by the Diaspora, in Europe and elsewhere. There are a number of reasons why this might happen and also why this is detrimental to the plurality of Blackness across the world and how it is perceived and supported.

Take Ryan Coogler’s recent Marvel movie Black Panther. Across much of the press the movie has been lauded as revolutionary. And in some aspects, for instance in terms of representation in the mainstream, it is. As far as superhero films go it is the first to deal with issues of being of African descent, its director is African American, it’s partly set in Africa, and its cast is predominantly Black, including actors from Africa and Europe. But where does that leave all of the other films with all-Black casts made in Africa? Nollywood should be celebrated with enthusiasm, as well as films such as Rungano Nyoni’s I Am Not a Witch, released at the end of 2017. Do these films not matter? Are they not worthy of mention and support and distribution on a larger scale? Where were all the leading African actors in Black Panther who hadn’t gone to Yale?

One of the most lauded achievements of the film is that it proved to Hollywood that Black narratives sell and therefore that there’s no reason to neglect these stories or Black actors, professionals, and artists. While representation matters and can reinforce the idea that Black lives matter, this premise is embedded in the discourse of profitability and art as a commodity. After all, Marvel Cinematic Universe is owned by Disney, which has historically profited from films with racist undertones.

When discussing countries such as the United States of America and culture, there’s one thing that cannot be removed from the equation – capitalism and more specifically neoliberalism. And this is why commercial success as a pointer of “success” and “revolution” is flawed and perilous. There are artists, thinkers, and especially rappers who have dealt with it head on – most recently Drake and his video for God’s Plan, in which the rapper hands out cash to people on the streets. There are others who disregard it, such as writer Ta- Nehisi Coates, who, upon the release of his book We Were Eight Years in Power (2017), was accused by Professor Cornel West of representing the neoliberal wing of the Black freedom struggle. This wing, West argues, might sound militant about white supremacy, but it renders Black fightback invisible. And the repercussions of that attitude can be spotted in the arts in the form of Black artists pandering to the art market. “Today’s artists are no longer fighting the colonial order,” veteran artist Rasheed Araeen said at the 2018 March Meeting at Sharjah Art Foundation in relation to non-Western artists’ increasing popularity in the global art market and the political apathy that often follows it. Araeen is also very vocal about formulaic art by POC artists, such as that criticizing non-Western governments to feed the expectations of the White West.

Arguably culture and commerce need each other in order to thrive, but does it always have to be at the expense of the unprivileged? The US prominence in the arts can be a double-edged sword. On the one hand, cultural exports such as hip-hop have helped not only Black people but all sorts of minorities to articulate their own ideas of freedom. On the other, this phenomenon, aided by its increasing profitability, also leads to the erasure and neglect of local cultures and the reinforcement of a hierarchy where brand USA often sits at the top. In recent years the desire for something more “authentic” has resurfaced, which in itself could be simply the product of our market economy’s continuous cannibalistic search for the new to commodify it. The market and industry of art and culture have always had a tendency to commodify everything from people to ideas to emotions. Failing to recognize the role of the capitalism that’s entrenched in culture happens at the expense of the 99 percent. When it comes to Blackness, the urge to emphasize this becomes more pressing because capitalism was the force that fueled slavery. 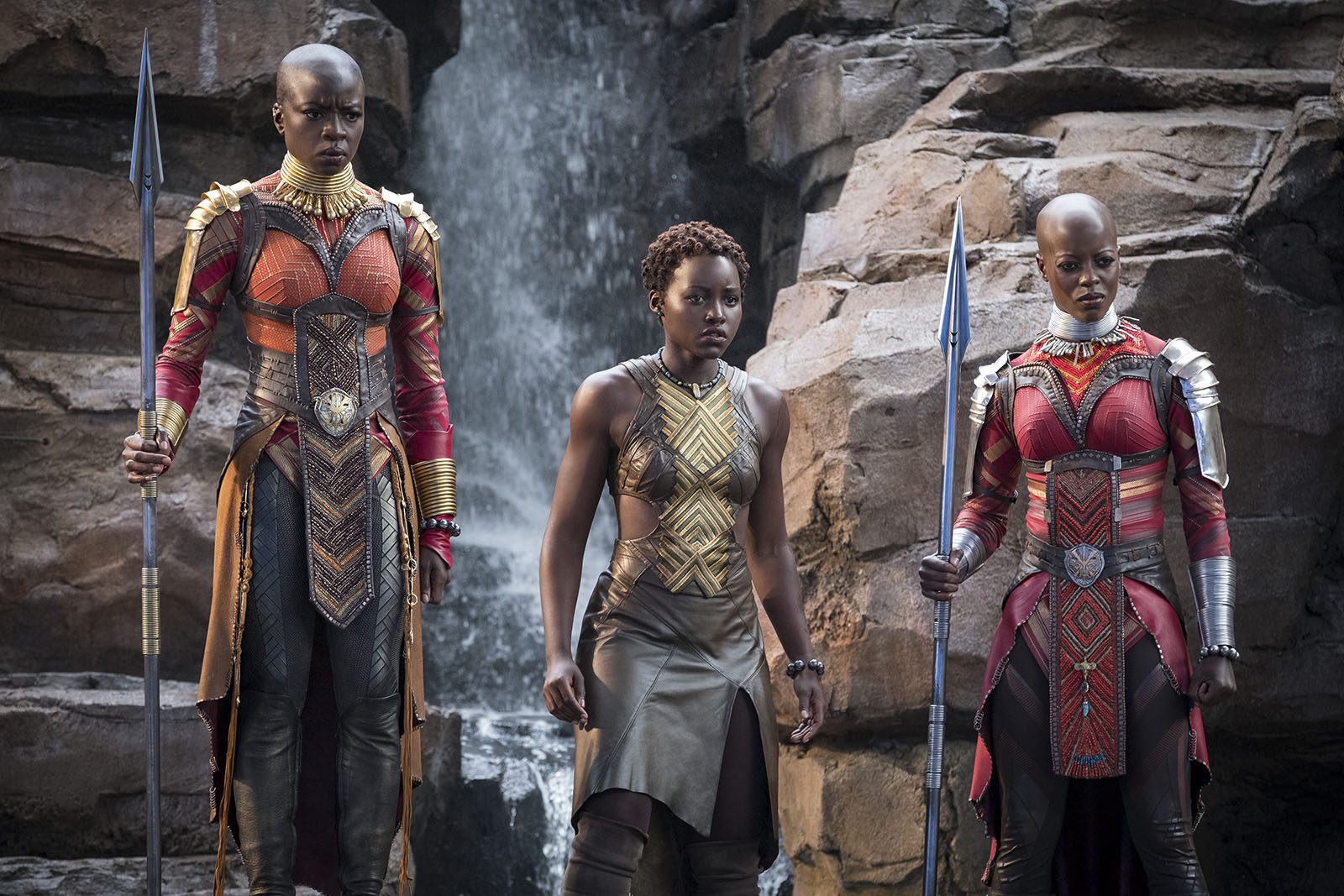 In 2018 US narratives still dominate across the board, especially when it comes to art that addresses race and racism. In Europe, Black and POC artists who deal with race and racism in Europe are often neglected in favor of African-American artists and their experiences. And there are also instances when African Americans organize events in Africa with an imperialist attitude, whereby there is little attention or care toward the local realities, or a “woke” message is used for capitalist endeavors.

There is no doubt that Arthur Jafa deserved his solo shows at the Serpentine and at JSC. Yet we have to question why Black artists in Europe who deal with race are not being supported on a large scale too. Historically the German Left was very supportive of African American intellectuals, from Angela Davis to Audre Lorde. When Davis was imprisoned in October 1970, The New York Times reported that self-organized initiatives to free her quickly spread across Europe, especially in East Germany, thanks to student movements.

Equally in West Germany more than 10,000 people including former West Berlin mayor Heinrich Albertz and Bundestag member K. H. Walkoff signed an appeal to release Davis. Yet they were silent on the issues affecting Black Germans.

In London, while the Tate Modern exhibition Soul of a Nation was received with great praise and had a high number of visitors (especially Black) last year, there is yet to be a show of such magnitude dedicated to POC British artists. Representation does matter, and curatorial and institutional support should not be underestimated when it comes to aiding artists to take their art further or simply survive to tell their stories through art.

But things are never one-sided. UK institutions also tend to focus disproportionately on experiences of the English-speaking world, with rare exceptions. Hence the UK can at times function as the “US” of Europe, whereby British artists disproportionally represent the European POC Diaspora. The Diaspora Pavilion in the 57th Venice Biennale, for instance, featured mostly British and UK- based artists. This leaves Black European artists on the European continent, who generally grew up isolated, lagging behind and using that as an excuse to not organize. But things are changing and there is a new awakening to these very issues. There are now initiatives across the continent that are creating networks with Black and POC artists in mind. One of these initiatives is 1.1 in Basel, Switzerland, a platform for young artistic practice in visual arts and music, cofounded in 2015 by artists Deborah Joyce Holman and Tuula Rasmussen. “We want to broaden a narrative that is usually told and represented disproportionally and from a not very diverse position,” says Holman. “Europe is a diverse continent, and it should be reflected as such through outputs but also within infrastructures of institutions.” By commodifying art, capitalism has simultaneously contributed toward democratizing it, to a certain extent. This paradox can create new worlds of opportunity and it’s up to the gatekeepers now to ensure that this also extends to all African perspectives.

Will Furtado is C&’s deputy editor.