For the second edition of the multidisciplinary festival 100%, dedicated this year to Africa, Simon Njami has curated the exhibition Afriques Capitales (Capital Africas) exploring urban imaginaries and set in the iron-and-glass structure of the Grande Halle of La Villette.

Three decades after Magiciens de la terre (Magicians of the World), a provocative 1989 exhibition that aimed to bring to light the globality of art (1), Afriques Capitales takes up the challenge of decentralizing the story of contemporary art as it inhabits the Grande Halle de La Villette. Spirited away into a labyrinthine re-imagining of the city, we are all invited to reorient our axes and rethink community. 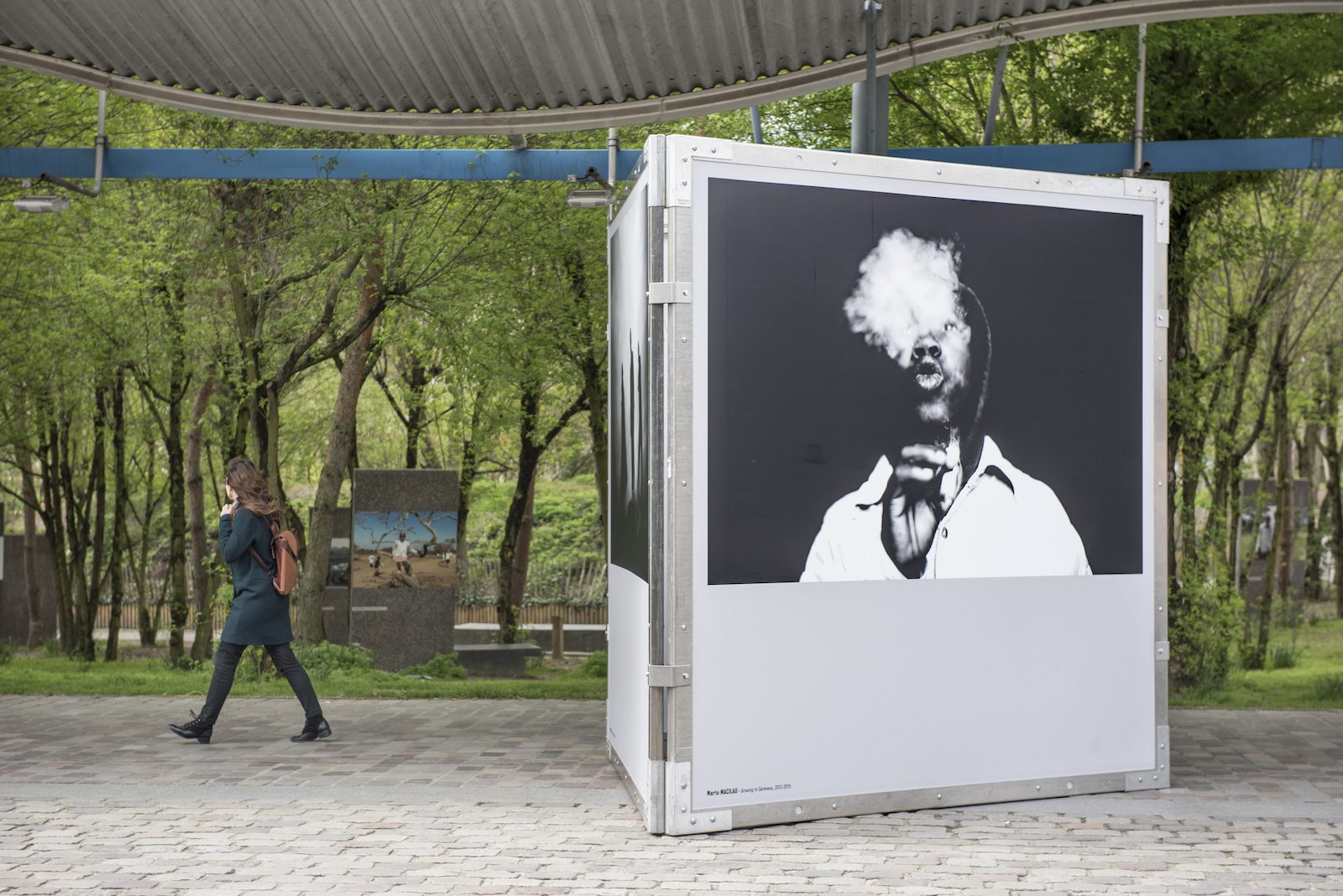 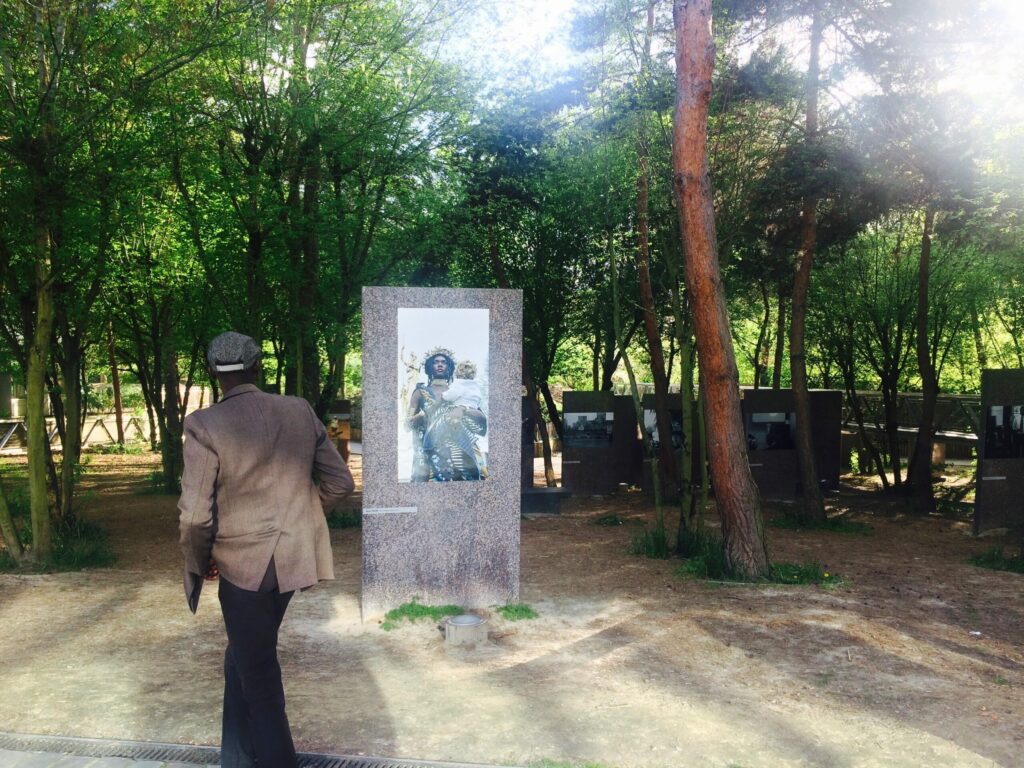 In the front courtyard of the Grande Halle, passersby are drawn in by the sight of photographs presented on large panels. One photograph in particular, a still from the video installation Raft of Medusa by Alexis Peskine, sets the tone. It is a reflection on the artist’s round trips between Dakar and Paris, echoing the challenges posed by representations of collective identity and by the visibility of postcolonial immigration in French society. 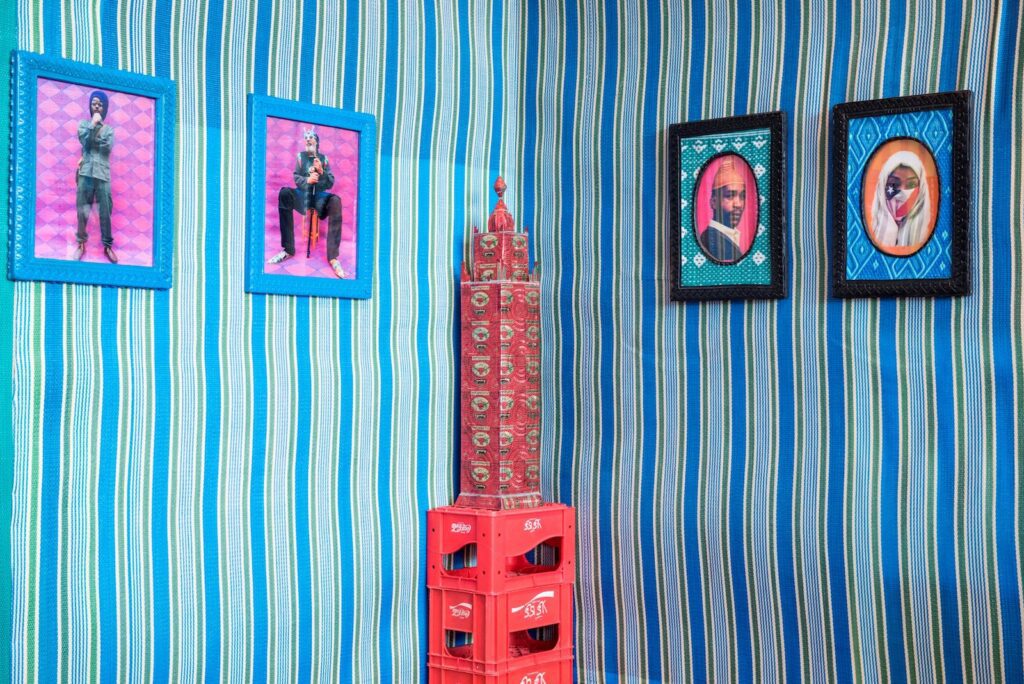 At the entrance of the hall, the public is greeted by Le Salon (Living Room), an installation by Hassan Hajjaj. Its friendly dialogue suggests a link between public outdoor space and the exhibition’s interior. The artist invites us to have a social interaction, creating a warm and cordial environment furnished with repurposed mass-produced objects and his own photographs. 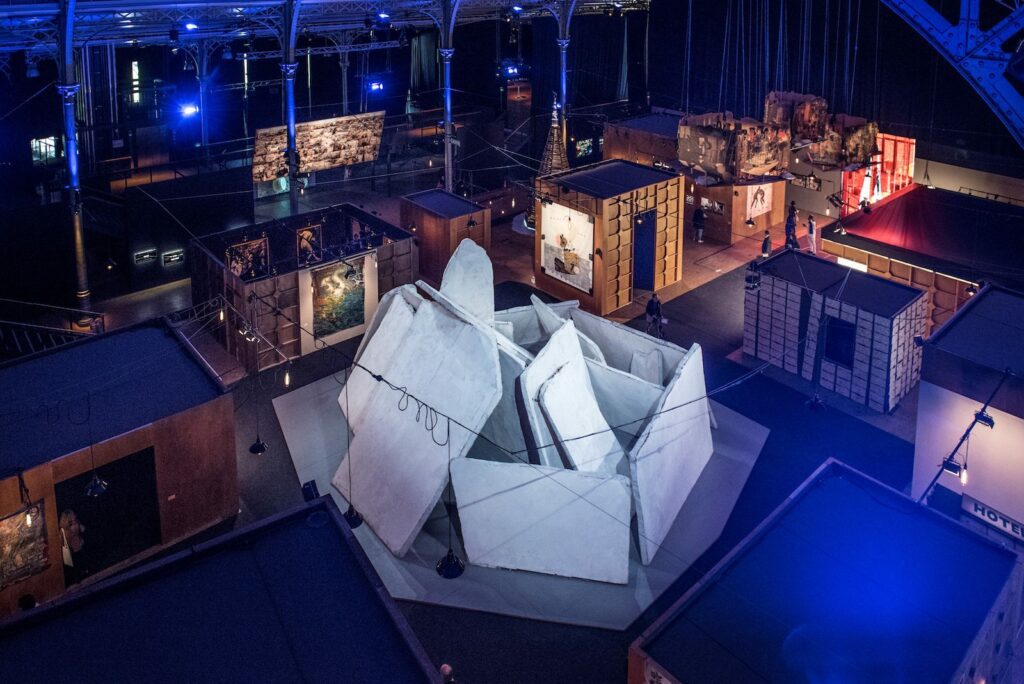 Submerged in darkness, we penetrate the space of the exhibition that has finally been freed of its white walls. Or, at least, all that remains of them has materialized in Labyrinth by Youssef Limoud, a metaphor of a ruined city. This monumental sculpture situated at the central junction of the exhibition is a translation of Simon Njami’s curatorial intentions to present a labyrinthine concept of the city. Limoud’s work challenges us mentally and physically. It is an invitation to lose ourselves and go out of our depths to find an emergency exit. To venture within it is to jeopardize the stability of one’s internal equilibrium and perspective. The labyrinth itself lets us decentralize our perceptions and shows us that we need to give up trying to map the group exhibition. Having lost our practiced art connoisseur stride, we are now in a heap of rubble, an informal place that is not usually receptive to interpretation except personal sensory readings. These wall fragments could fall on us, as though to remind us of the sites of precarious lives that have been subjected to the cycle of violence since 11 September. This devastated agora asks us: What are the conditions for preserving a public sphere in which critical thought remains possible? (2) What are the social implications of the infernal machines that metropolises constitute, these neural pumps of overblown capitalism? 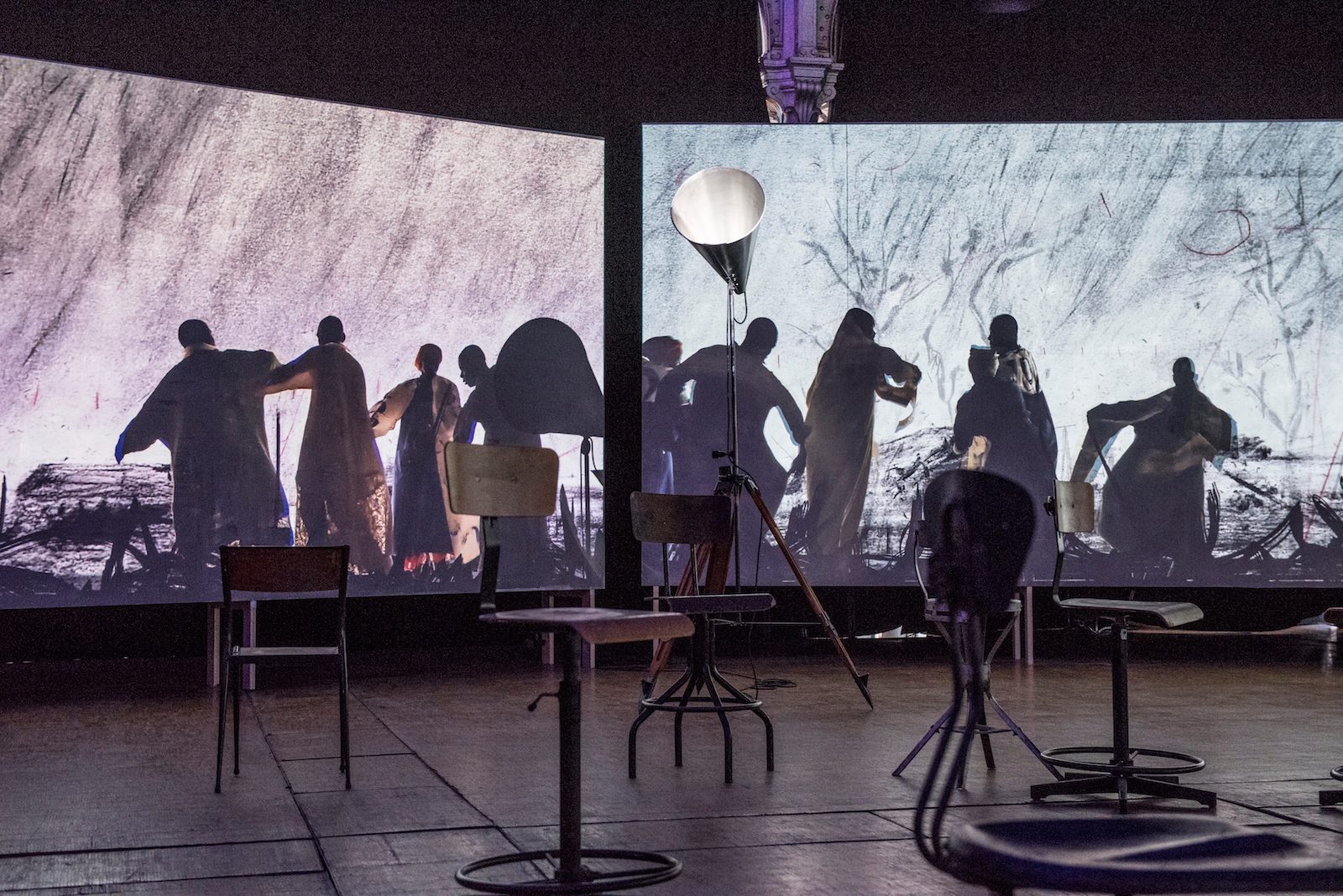 Without proposing a model in response to these questions, Afriques Capitales encourages visitors to stroll through an intimate nighttime environment. There, we discover each work by lamplight or by entering one of the wooden cubes where we encounter artists’ creative intimacy. There is an auditory dimension as well: a story played over loudspeakers in odd corners of the exhibition whispers possible paths we might take in our ears. The sounds of brass instruments draw us to the installation More Sweetly Play The Dance by William Kentridge. This panoramic video, staging macabre dances across eight giant screens, evokes a procession of silhouettes shunned into social solitude. The visitors find themselves at the center of the panorama encircled by the figures, who have been revived from their oppression. Perhaps the visitors’ perceptions become the very core of the work. Is this putting into perspective the tendencies to exoticize and play the voyeur when contemplating the spectacle of misery? (3)

From an iron gangway, we discover this micro-society from above.

At a distance, we see Falling Houses, suspended shacks demonstrating Pascale-Marthine Tayou’s characteristically humorous approach to art. Her inverted rooftops seem to float in the air and, liberated from the spatial compartmentalization of the white cube, symbolically disrupt the vertical dynamic of metropolitan architecture. This sculptural turn is articulated throughout, even in the exhibition’s title, AfriqueS CapitaleS. This use of plurals – AfricaS, capitalS – makes us question the center as the dominant and normative geographic reality in “modernized” twenty-first-century life. Here, the human experiences contained within the city are at the forefront. 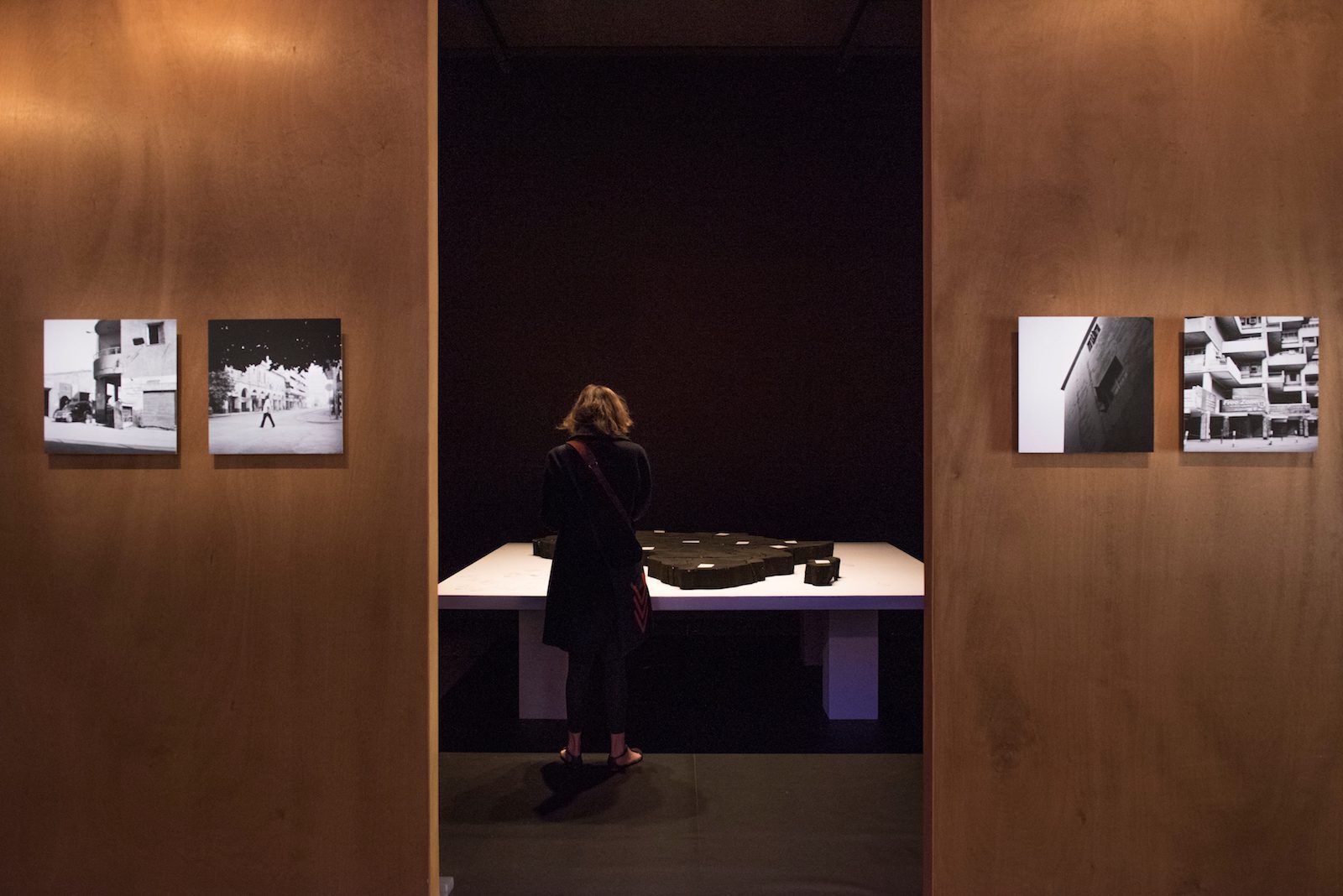 Next, around the interactive work Africa Untitled by Ato Malinda, we encounter a relief symbolizing the geography of the African continent and the incisions of its borders, the product of European colonialism (the Berlin Conference of 1885). A cultural exploration in the form of a game, the installation asks visitors to consider the history of how the continent was cut up. The atmosphere is one of listening and collective cooperation. The game progresses based on everyone sharing their knowledge and experience. “Algeria, that country’s mine!” declares a middle-aged woman from the public. While the artist’s practice questions the hybridity of African identities, she also provides us with a space, in Paris, for articulating multiple and collective identities. She puts into perspective the national narrative, which has given hierarchical preference to French citizenship for far too long.

Continuing this experiment in urban decentralization and this creolized conversation about archipelagic relationships (4), the exhibition will move to a second edition, Vers le Cape de Bonne-Espérance (Toward the Cape of Good Hope) at the old Saint Sauveur freight depot in Lille. Afriques Capitales seems to leave no one unmoved. It’s an invitation to rewrite the city in view of the pluralities of all our readings. With boots full of mountains of questions that will endure (5), we have a magical experience.

3 Susan Sontag. Regarding the Pain of Others. New York: Picador, 2003.

Elsa Guily is an art historian independent cultural critic living in Berlin, specialized in contemporary readings of critical theory and the political challenges of representation.