How To Disappear – Group Show

On 14 March, Goodman Gallery Johannesburg opens How To Disappear, a group exhibition which considers the pervasive modes and technologies of surveillance in the making of contemporary society. This includes subtle and overt practices of racial profiling in public spaces, the distant violence of aerial surveillance, or the silent accumulation of algorithmic and digital data on almost every aspect of a person’s life.

Working with analogue and digital imaging technologies, found footage and photographs, and more traditional media, participating artists’ reflect on how these surveillance methods render us as visible and visualised subjects. And in some cases, attempt to reclaim a sense of autonomy by revealing how these technologies might be turned towards forms of resistance.

Pernicious forms of surveillance hold a particular resonance in the contemporary moment. Globally, we’re witnessing this in the form of ‘surveillance capitalism’ – a term coined by author Shoshana Zuboff to refer to the use of human experience as free raw material for translation into behavioural data. While earlier this year, the Constitutional Court ruled that the Regulation of Interception of Communications and Provision of Communication-Related Information Act (Rica) has failed to safeguard South African’s rights to privacy.

Broomberg and Chanarin’s series of portraits, Spirit is a Bone (2013), were created by a facial recognition system recently developed in Moscow for public security and border control surveillance. What is significant about this camera is that it is designed to make portraits without the co-operation of the subject; four lenses operating in tandem to generate a full frontal image of the face, ostensibly looking directly into the camera, even if the subject is unaware of being photographed.Co-opting this device, Broomberg & Chanarin have constructed their own taxonomy of portraits in contemporary Russia.

David Goldblatt’s little known photographic series While in Traffic, Johannesburg (1967) features candid images of people in their cars. These images were taken in the same year the South African Police force began counter-insurgency training. Assuming a voyeuristic perspective, Goldblatt captures his subjects in mid-conversation, gazing into the distance and glancing at other passengers.

Ja’Tovia Gary’s film, An Ecstatic Experience (2015), examines the legacy of resistance by reclaiming iconic historical events with the goal of reimagining the Black figure within moving image. The film uses recuperated archival material, montage editing, and analogue animation techniques. The result is a piece of work that explores transcendence as both a means of restoration and a form of resistance.

Peripheral Vision (2017) includes four photographic portraits of mounir fatmi in which the artist’s face is partly obscured behind a large geometry protractor held at eye level. The work addresses the question of vision as a set of cognitive processes and mental operations that contribute to the perception of our environment. In this work fatmi signals the way we percieve what surrounds us and encourages a new awareness of what connects us to the world and of the comprehension of its limits.

Jeremy Wafer’s circular photographic works, Nhlube (2004/2020) and Spitzkop (2004/2020) contrast two places, one deeply familiar to the artist and the other, a non- descript view of veld. Wafer sourced these images from the South African survey office, and scanned and isolated sections using a circular template. This forms part of Wafer’s ongoing exploration of cartography and aerial survey mapping photography as a means for bringing to light the socio-political and psychological implications of the division of land in South Africa.

Khalil Joseph’s BLKNWS (2019) redefines the genre of the news broadcast. BLKNWS consists of a continuously updated newscast of black life in America in the form of a two-channel video that splices historical and contemporary found footage with newly shot scenes of news room and documentary reportage.

Nolan Oswald Dennis’ works Aporia (2016) are monoliths of light wrapped in grey utility blankets. The work is inspired by the interim state experienced during cycles of political contestation. Dennis points to the example of Chumani Maxwele’s fecal protest of the Cecil Rhodes statue in Cape Town, which lead to its removal by the University. “The statue was first wrapped in plastic and then boxed in plywood while the university attempted to respond to the decolonial demand of the students,” states Dennis. “This moment of half-removal, or attempting to conceal the issue, creates a suspension in the political process, an attempt to both remove and not remove the offending object.” 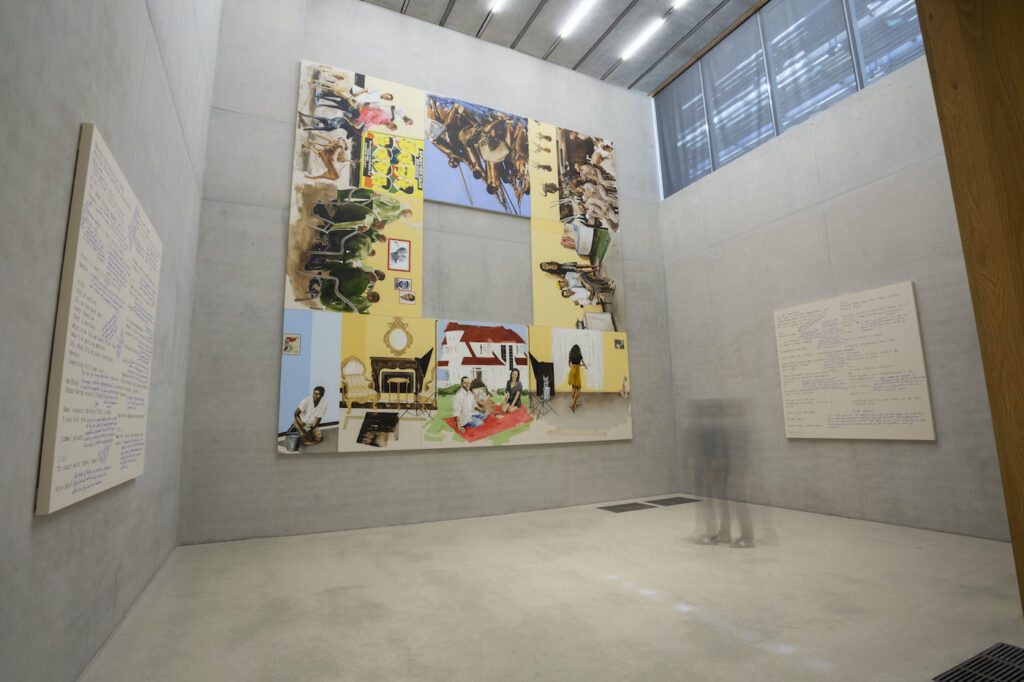