« An artist has to be a visionary »

The Leopold Senghor award of Dak’art 2016 was given to the Egyptian/ Swiss artist Youssef Limoud for his work Maqam, installed in the former court of the Palais de Justice. The installation is serene, recalling the calm after a storm. Youssef Limoud talks to Elsa Guily about his art.

The Leopold Senghor award of Dak’art 2016 was given to the Egyptian/ Swiss artist Youssef Limoud for his work Maqam, installed in the former court of the Palais de Justice. The installation is serene, recalling the calm after a storm. It gives shape to the viewer’s imagination of what The City in the Blue Daylight – a line from a poem by Senghor and Simon Njami’s theme for the Biennial – could be.

“An artist has to be a visionary. Someone who sees things without looking but by sensing their materiality.”

“Maqam is an installation in progress, happening in different chapters and places. I started working on this idea of the city three years ago in reaction to the pictures of destruction happening in Syria. The notion of ruins taps into my own sensitivity – it raises questions about socio-political circumstances while speaking about geological facts and the passage of  time. We are living in a chaotic world in constant motion. 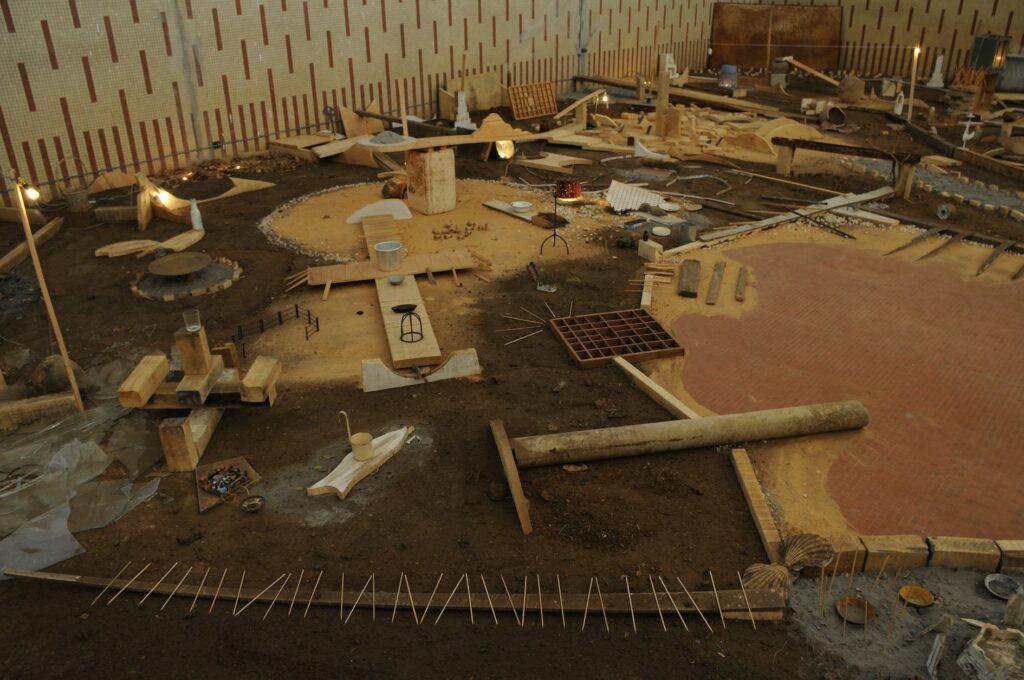 For the Dakar Biennale the most important aspect of this installation was the encounter with the space itself. I had to integrate the space into the work, to avoid a separation between site and work. As such I incorporated the witness stand and other aspects of the place into the work of art. While I started by using whatever materials left around in the Palais de Justice that attracted me, I also let myself be influenced by the city of Dakar, in which I saw the simultaneous existence of a precarious state of things, as well as something very fine. This city might be under ongoing construction, but people still live in a kind of harmony. Behind the rough and tough materiality, you feel this passion and the finesse of things.  Through the precarious aspect of my work, I wanted to reflect on this fragility of the world.

I had to make the work in three days, which meant that the objects used in the work were collected and chosen within the process of creating the work. The artistic process in this installation, as well as in my paintings, is based on the principle of collage and collecting. The objects collected signify the motion of living: each thing was once inhabited with our presence and are now traces of a fragmented life, bringing a poetic aspect to the work. Assembling this work was an endless search – conscious and unconscious – for relations and encounters between things. When I do a work of art there is always a geometrical aspect that comes out, like a calculation that underlines the relations between the elements of the work. Here, I wanted the viewer to step into the work in order to emphasize the tension between the different elements, as well as the huge scale of the installation. I installed a lamp in order to light the city at the end of day, to give it life. If you are here around seven when day is changing into night, you may feel this change from light to dark with these small lamps 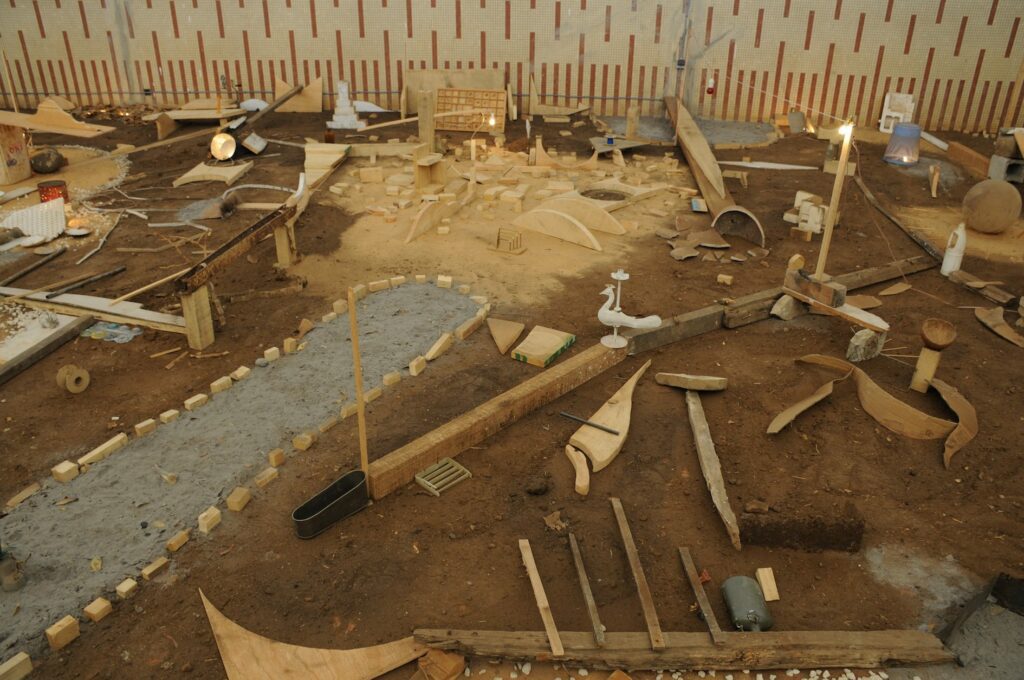 The night before the opening I was still working on the installation, but sometimes it is inspiring to do things in a hurry.  Anticipating every element of the work may kill creative feelings. I work primarily with intuition. If I have to find a solution for a work, I cover my head in bed  – even if I’m not sleeping –  and dream a solution. In this act of lying down one can meditate and many of my previous works have happened like this.  The act of doing may take a short or long time.

The narrative aspects of the work is present in the objects themselves, but it is also emphasized in the title Maqam, that has many meanings in Arabic. The first one is home, the place where one feels comfortable, but tinged with  a sense of nostalgia. Another reading could refer to a shrine where sacred people are buried and where one goes to worship and to be blessed, in other words the notion of death is also present in the work. The third meaning has to do with Arabic music scales. This narrative element in the work is also underlined by the use of sand and soil, embodying the earth, one of the four elements in ancient Indian philosophy. Light is non-material and used together with soil, it creates a sensitive fluidity in the work. 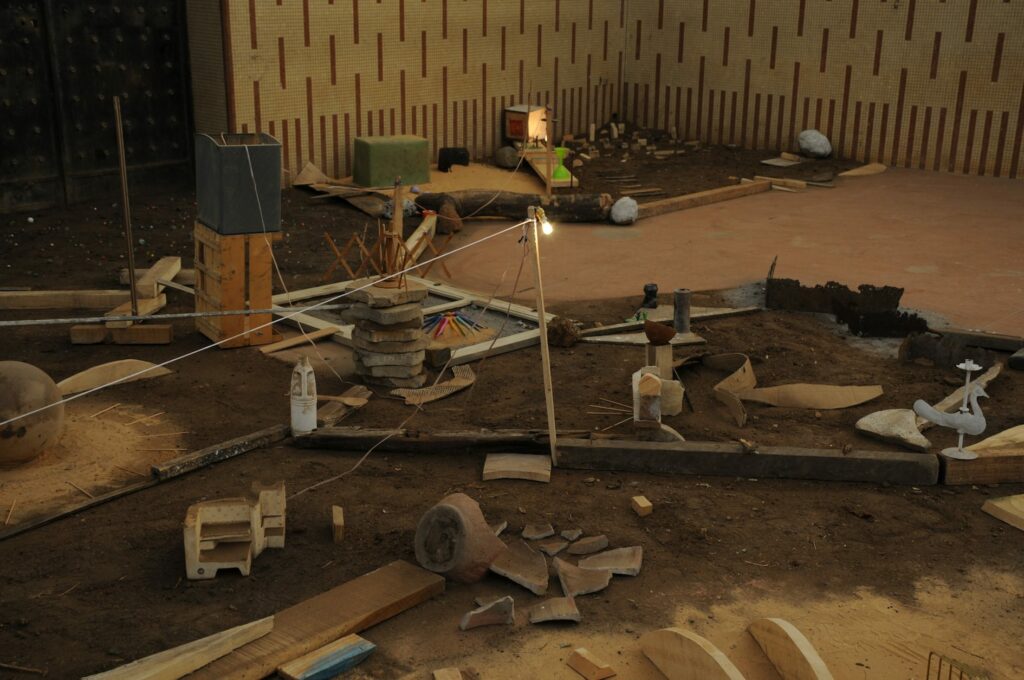 Maqam is not a maquette, representing an idea of the city: it is above all a poetic statement, which I visualise using found materials full of aesthetic qualities. It is about breathing a vision through the materiality of the city. It can also be read as a direct response to Simon Njami’s concept The City in the Blue Daylight because in my work, in the Palais de Justice, you feel as if you were walking through the city of Dakar. I am curious to learn what people see in it, because they add something to the work through interpreting it. Njami has managed to break this line between art and life by choosing works that work with this concept. Choosing the Palais de Justice as a site of art reappropriates this neglected place of history and thereby reshapes the confusing narratives embedded in these walls

The power of the Biennale is this idea of engaging the past in order to reshape or re-enchant our present. Maqam may evoke criticism for modernist architecture, as well as the civilizing project of modernity that now seems very fragile and ephemeral. If modernity seems inevitable because of the spread of capitalism, works of art can at least critique this vision of the world Art should stand against the corruption of the mind and should improve our critical vision of the world. It is all about consciousness. You can make beautiful things but without consciousness you are missing the point of doing things. I agree with Nietzsche that art makes life meaningful. I see art as a spiritual and meditative way to speak about what I feel, in order to give meaning to life. That is why I believe in art!”