Three artists from the UK, the US and Canada strife for more authentic terms of self-defining in a Berlin exhibition

Sonia E Barrett, Growing out the sides, peace, there's a shotgun barrel at the centre of my face, AFROcan, Steering identity, 2016. Swivel chair foot and chair fragments. Courtesy of the artist and tête Gallery

“I am the sole author of the dictionary that defines me.” With this statement Zadie Smith cemented her novel NW in the canon of literature that masterfully depicts the expression of identity, in its broadest sense, in day to day life.

In December 2016, three artists showed their work together at tête Gallery in Berlin to explore the concepts of identity and to redefine them. Performance artist Indrani Ashe, sculptor Sonia E Barrett, and painter Shannon Lewis are artists of color from different backgrounds living in Germany. Together, in their group show « My Future Nonidentity Will …” (December 10-14, 2016) they have exerted their will to self-determination by reassembling the parts that make them whole in their own terms.

Sonia E Barrett, a British artist with Jamaican and German roots, has long dealt with the historical baggage of furniture and how that’s been transported with the diaspora. In the exhibition she presents some of that work alongside pieces that denote a departure in form. “Chair nr 38 steering identities heartbeats, gun shots in this ch/br_est” (2016) stands tall in the corner, towering visitors in an amusing yet authoritative way. Made out of a repurposed black leather massage chair, the anthropomorphic work is inevitably imbued with references to how the black body has been historically employed. Yet here its parts – literally – have been rearranged and the footrest that resembles a steering wheel has been placed on top as if commanding its own destiny.

Many if not all of the original qualities of the chair are present, including its vibratory function. It emanates an eerie vibration sound that changes from a low throb to heart beat to gunfire of its own volition. The fact that the artist has reinterpreted all of the chair’s functions and given them new life to fit her purpose, assert her independence from the public’s view while suggesting the reclamation of one’s body. Part ready-made, part assemblage, Barrett’s piece as a whole exudes the “rip it up and start again” ethos while sending a message of self-definition and making reference to Black Lives Matter on top.

Canadian artist Shannon Lewis also addresses the fractured self in her paintings and collages. Her paintings often feature female subjects without a face or other body parts in stylish settings suggesting that like many things in life our identities are works in progress. She presents this process in the show with a series of paintings lined up on the wall, starting with the foreboding depiction of the white male gaze surveying the sequence.

The succession of paintings depicts various stages of the construction of the self and how it is influenced by social media. Lewis’ oil paintings represent the subject of identity as if it were a puzzle whose pieces are constantly morphing. Images of fragmentation are supported by the artist’s collage practice which feeds into the paintings. In “Sometimes But Not Very Often” parts of a woman made of different shades of brown inhabit a stylish room. She is holding a camera phone to take a selfie but only part of her can be seen in the picture; a commentary on the power shifts present in the digital world. Lewis’ paintings nod to the idea that in a consumer society we all become images, some of which we can’t control. 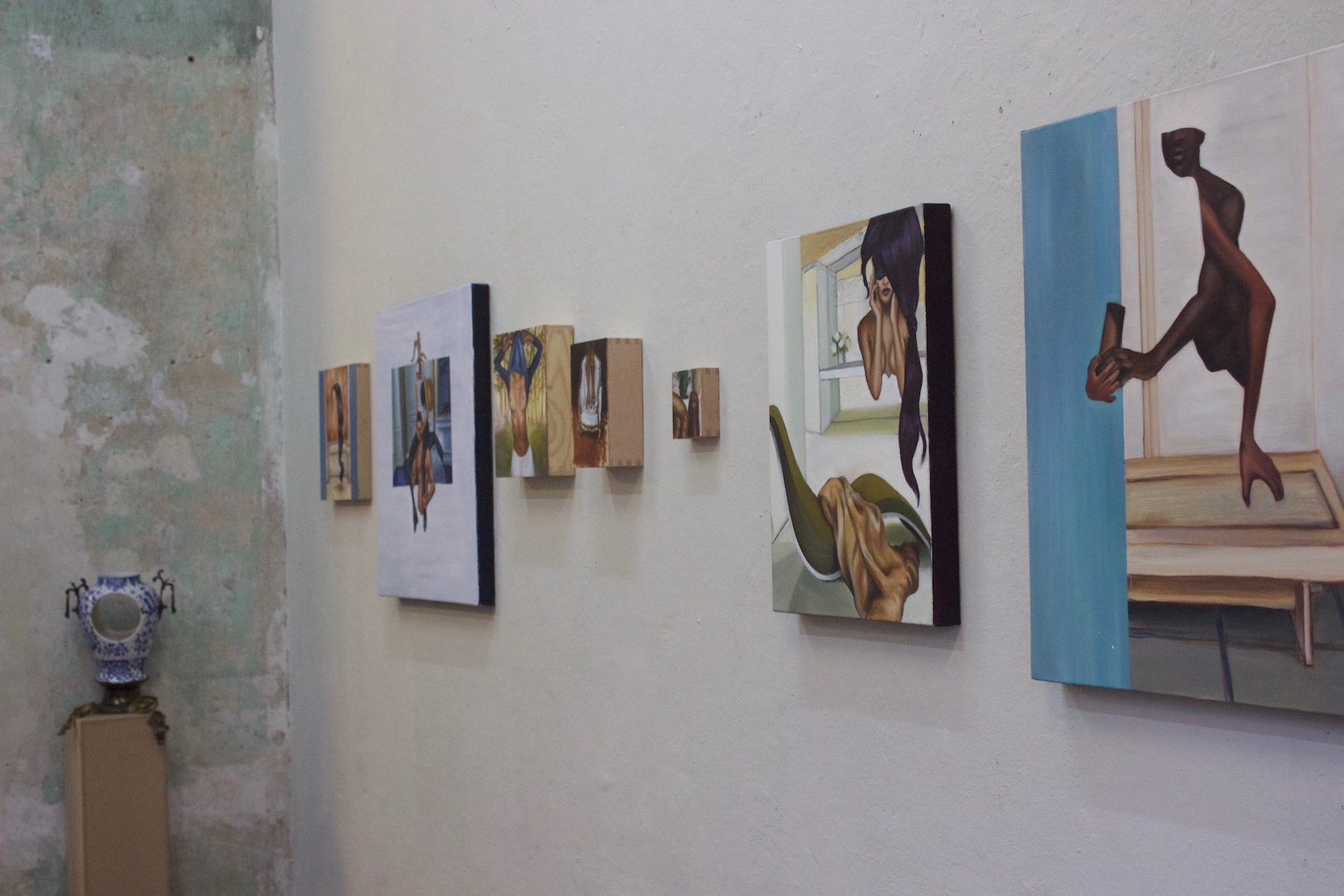 Installation view « My Future Nonidentity Will …”, 2016. Courtesy of the artists and tête Gallery

Across the room hangs “Dancing Through The Siren” a white drape faintly printed with Lewis’ collage work. In it a female subject sits on a throne with a Prada bag in tow. The fabric undulates with the breeze and just like the woman represented, it constantly shape shifts. The artist implies that one can potentially create one’s identity by picking and choosing the desired sections or the ones that are made prominent by society or a specific person. However, there are generally many elements of ourselves that are not so perceptible. These could be gestures, nuances, knowledge, mannerisms, tastes, et al, and they can influence how others behave towards you and vice versa.

Transparency in the relationships between people is also a theme that artist Indrani Ashe explores in her practice via 2D images, installation, video and performance. To complement the group show the US artist presented a few of her projects, mostly dealing with the intersection of class, race and gender and how that’s played out through dating. One of her installations is composed by print outs of private emails that are plastered all over the wall. They contain, among other general exchanges, her correspondence with a man she had dated and who’d to lead her on because of his privilege and personal identity. This experience influnced Ashe’s unfinished erotica “The Pussylicker Club” which she performed at the show. In her performance the artist narrates in a rather intimate setting the story of a girl who after being messed about by a guy decides to create a persona that she thinks will please and retrieve him. 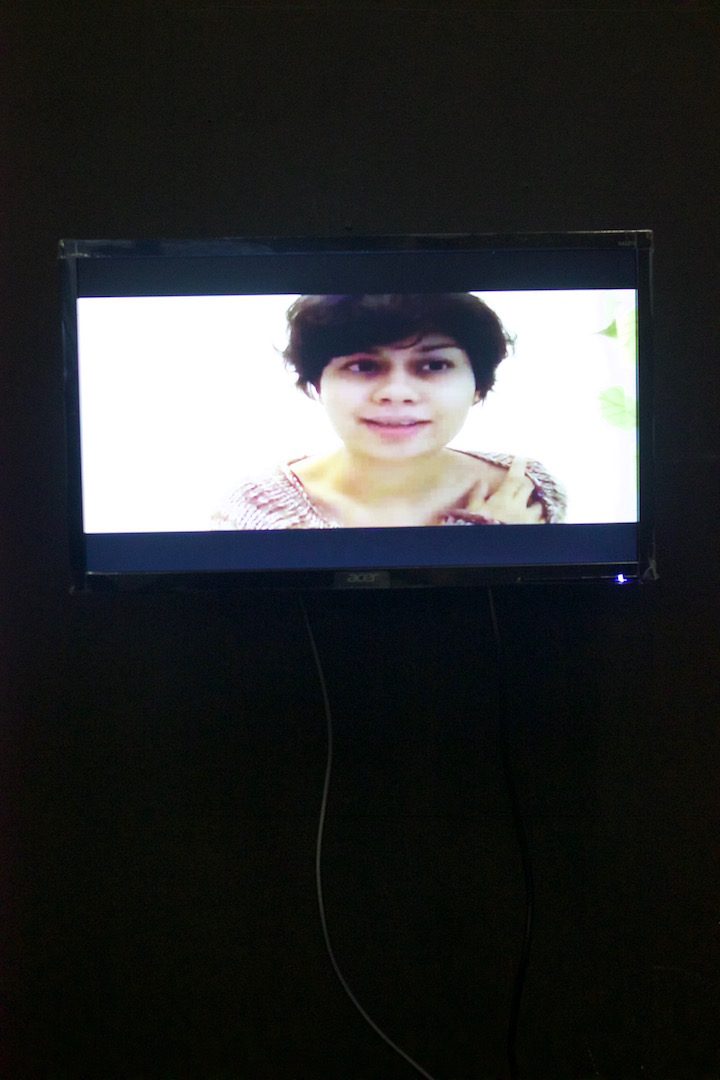 In “Troubleshooting”, her other work based on recorded videos of her Skype dates the artist analyses the emotional labor women are talked into executing to sustain the desires of acutely non-committal men. Neoliberalism is another invisible force that pops its head into these situations. Under neoliberalism the economic sphere dominates society and it encourages allegiance to the group we belong to and therefore allows for total disengagement from social obligations towards the social other. So one conclusion to take from this work is that culture and social status are also forms of capital that can be used to exercise privilege over someone. Simultaneously one’s identity can be shaped by that invisible currency, either by trying to integrate into it or allow oneself to be judged by it.

“Identity” has been a buzzword for years, especially with all the recent happenings such as the legalisation of gay marriage or the broadcast of often deadly racial profiling across the world via social media. It has even been written off as a mere trend – an argument that simplifies it in a world that yearns for easy concepts. But as we saw during the last US election, where white women put their race before their gender, and as these three artists show, that’s far from reality. Identity is a fluid force in constant metamorphosis, and we should take note of its ramifications to better understand ourselves and the world we live in.

Based in Berlin, Will Furtado is Sleek Magazine Online Editor, a writer, and curator.