An exhibition in Slovakia highlights communities displaced by governmental greed in the name of progress. These include Norway’s Sámi people, some of whose songs are reminiscent of the African American hymns. Mia Imani Harrison writes about the communities portrayed in the show and how renewing memory can create alternative relationships to our archives.

“Wade in the Water”

I almost walked passed it. My thoughts were dripping down my temples clouding my consciousness, which was left resting on top of my glistening skin. Tranzit – a gallery disguised as a street-corner fashion atelier – became a safe haven from an inescapable heat and a portal into heritages I was unfamiliar with. Sunlight burst into the space, ultra white walls reflecting light back into my slow adjusting eyes: Different situations require longer acclimation periods. The asphalt-colored floor grounded my thoughts.

Liquid Horizons, an exhibition curated by Rado Ištok, highlights communities who are byproducts of resettlement due to the construction of large-scale dams over the past five decades. Dams, technological signs of modernity, have disproportionally displaced ethnic minorities throughout history. The show features the work of six artists from across the globe and Eastern Europe who have investigated how to retain or unearth their personal or another community’s collective narrative by dissolving the linear confines of the past, present, and future.

Archive. Decolonization. Heritage. Three keywords that are at the helm of social justice-driven conversations, especially within the arts sector where self-reflection is a frequent practice. People are seeking to understand who they are and where they’re going based on the truths they inherited from their experiences, families, and society. Some seek answers on Ancestry.com and 23andMe.com, where genes can be traced. But data is nothing without the context. What do you do when parts of your history were altered, destroyed, or erased? 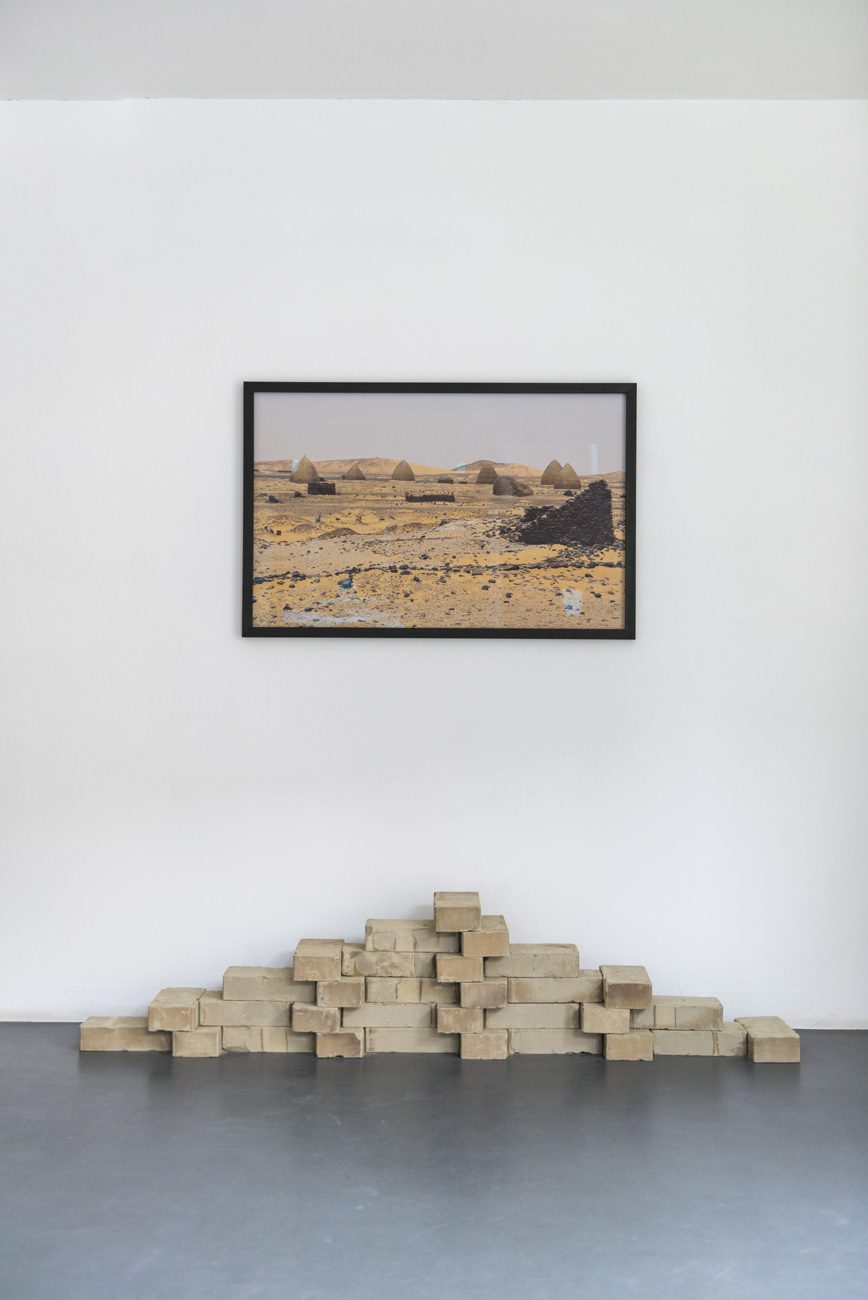 As an African American woman, I am constantly confronted with the convoluted nature of my lineage — knowing that I will never be able to return to where they came from. Being African American means our essence lives in transit and movement as our history is rooted in being uprooted, severed, disassociated, and dislocated from our truth. These facts drew me to two particular works within the show that helped me learn how different communities self-articulate and how my experience could participate in this curated exchange.

“Wade in the water, children”

Ten wooden squares with black-and-white photographs of rural lifestyles frozen on their surfaces, from Lucia Nimcová’s photographic installation Starina (2019), greeted me in the space. Four nails held each of these distant realities in place, as they come from a town that only exists within the images and Nimcová’s memories. Each image serves as a cultural time portal – an introduction that invites the audience to reimagine moments before, during, and after the Starina reservoir was built in the 1980s. This is done through a mixture of governmental images, their accompanying documents, and family-owned images.

In one portrait, with a scarf tied in one lax loop under her neck, an older woman gazes into the camera with a slight smile. Her foot lightly rests on an uneven beam of wood –  life’s teeter totter. In institutional archives, she would be left out, her significance only warranted if she was part of a certain social class. How many narratives get left outside of the collective memory when images, records, and other artifacts are destroyed, in this case submerged under water? Are there alternative ways to reactivate events? 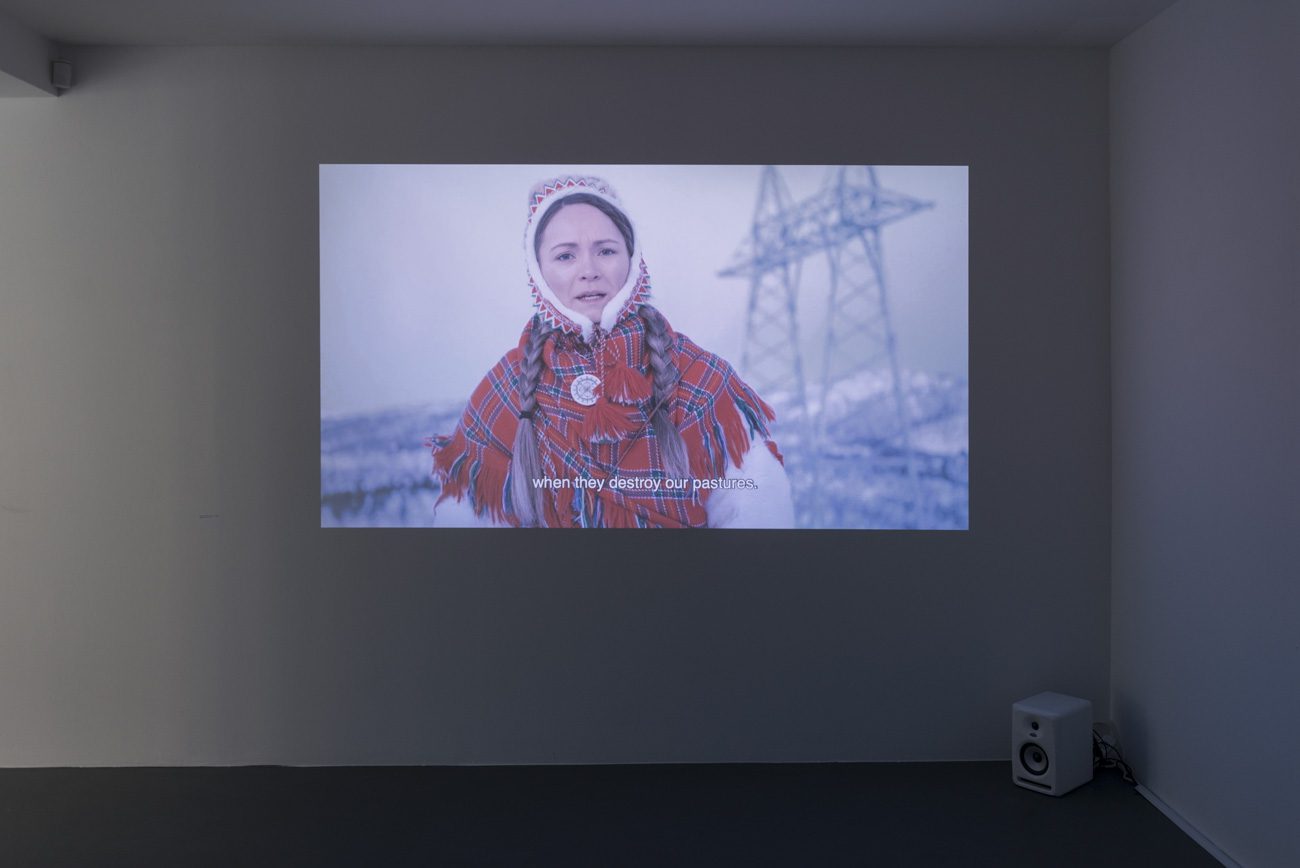 Starina and Elle Marjá Eira and Mai-Lis Eira’s project The Sámi Has Rights (2019) suggest that we look to oratory traditions like singing, which are not only used to pass down heritage but to uplift spirits and share insider information. Songs that heal, sounds that sound beautiful but carry the trauma – frequency clearing the hardship. Each uttering and breathing a different way of being into reality. Answering questions that don’t only appear in their film, 6 February 1981 but arise during any displacement:

How will we manage there?

Where will we go?

What kind of place will it be?

What if it’s not welcoming?

“The lord is with us. We begin our travel. Bless our travel.” This travel psalm was sung as the Sámi people of Sámpmi, Norway, were on their way to meet with the Norwegian prime minister to protest the construction of a dam in 1981. This gesture reminded me of the African American hymns which helped slaves survive and find the strength to face another day. A song like Wade in the Water held a dual meaning, as it was used by Harriet Tubman in the Underground Railroad to warn slaves to travel through water to throw off the bloodhounds sniffing their trails.

The concept of choosing to submerge yourself to cleanse, to renew a memory, is what the works in the exhibition conveyed well. Histories are made visible again, allowing them to be retold, challenged, and discussed. Unearthing the past, we can dive deeper into the different potentials of being. Collapsing the linear model of memory (past, present, future) can help us create alternative relationships to our archives.

Liquid Horizons is at tranzit, Bratislava, Slovakia until 7 July 2019.

Mia Imani Harrison is an artist and writer currently based in Berlin.