A review of the Biennale Jogja XIII

The Installation “Sweet Crude, Black Gold” looms ten metres high in front of the Jogja National Museum: on the right a blazing fire is giving off thick black clouds of smoke, behind it a heavy iron chain, charred pieces of wood flying through the air. On the left there’s a sooty machine with big pipes jutting into the sky. Piled up in front of the Indonesian graphic artist Maryanto’s monumental acrylic painting there are dozens of rusty oil drums which Victor Ehikhamenor has painted with red patterns reminiscent of traditional designs from Nigeria, his home country. The artist and writer calls his part of the collaboration, “The Wealth of the Nation”: Indonesia and Nigeria both have large oil deposits which have an impact on the economic as well as the political situation in the young democracies – and cause many conflicts.

“Hacking Conflict” is the title of the Biennale Jogja XIII held from 1st November to 10th December 2015 in the central Javanese cultural metropolis Yogyakarta. “I invite everyone to experiment with conflicts, with disarray, misperceptions, and disagreements,” curator Wok the Rock explains, himself known as an experimental artist. “Conflicts are always regarded as a problem that needs to be overcome. And yet conflicts are a part of every democracy where people can openly express their opinion. We should therefore look upon them as a source of energy which can create totally unexpected forms of harmony.” 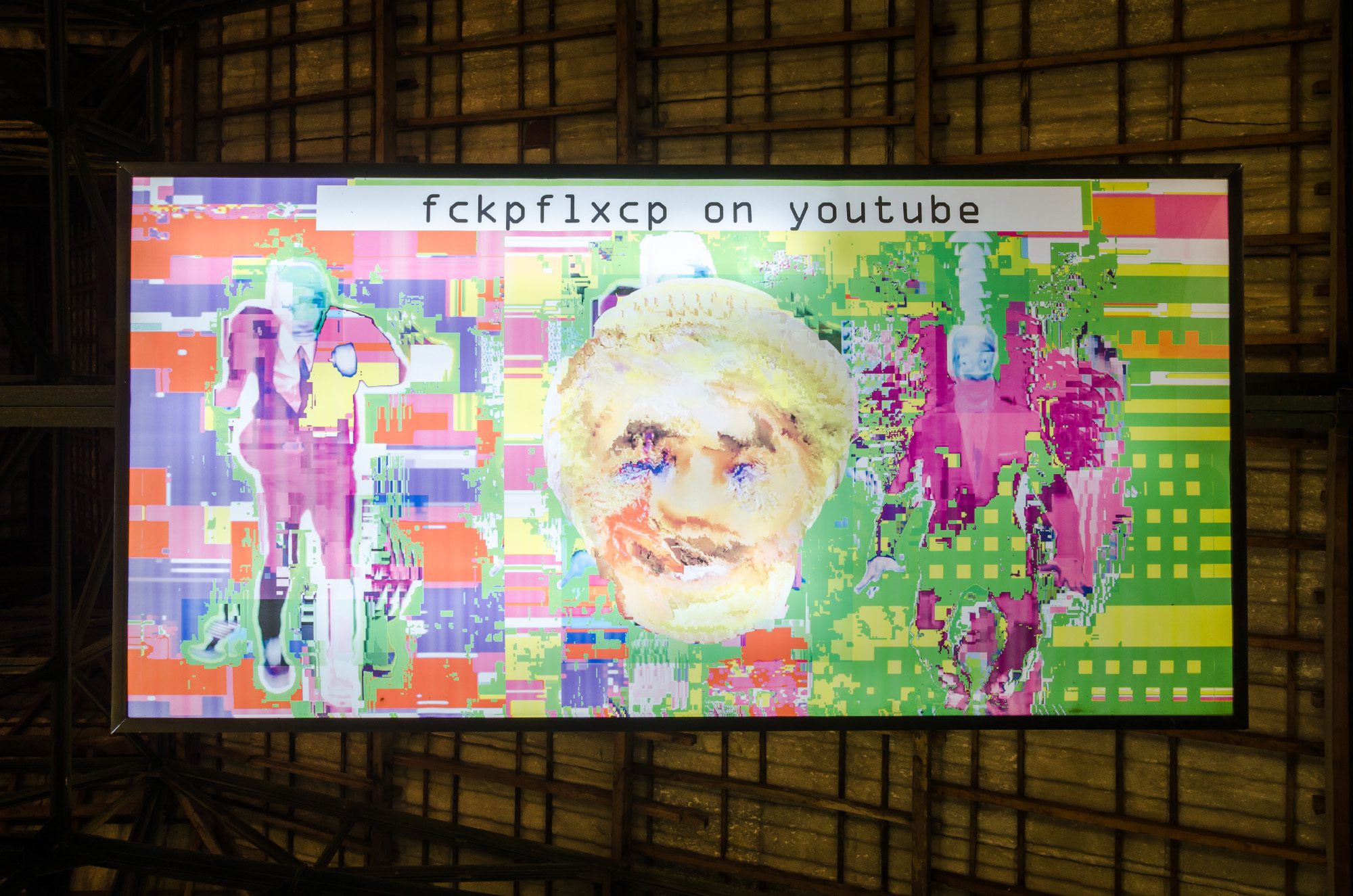 Partly unexpected for many of the participating artists were the similarities between Indonesia and this year’s partner country Nigeria: both countries are former European colonies ruled by military dictatorships until 1998. Remnants of the past such as corrupt systems or human rights violations that went unpunished affect the democratic processes to this day. But even everyday life on the streets, in markets or families offers many similarities. The cooperation with Nigeria is the third edition of the so-called Equator series: Until 2022 the Biennale Jogja will focus solely on countries on the equator so as to break the mould of the globally dominating parameters of North and South. In 2011 the focus was India, in 2013 the Biennale invited artists from several Middle Eastern countries.

The deliberate confrontation with conflicts is not only the topic of this year’s exhibition but at the same time its curatorial method: in numerous interdisciplinary collaborations the organisers confront the artists from both countries with different conceptions and ways of interpreting so as to inspire new creative realisations. However, the presentation is provocative: while the art works are presented in improvised “activity spaces,” accompanying events take place in the actual gallery. In addition the activity spaces are surrounded by yellow scaffolding and sheets of corrugated iron that are intended to emphasise the character of work in progress. This did not appeal to all visitors: “So where’s the actual exhibition?” or “It resembles a construction site,” were some of the comments at the opening. 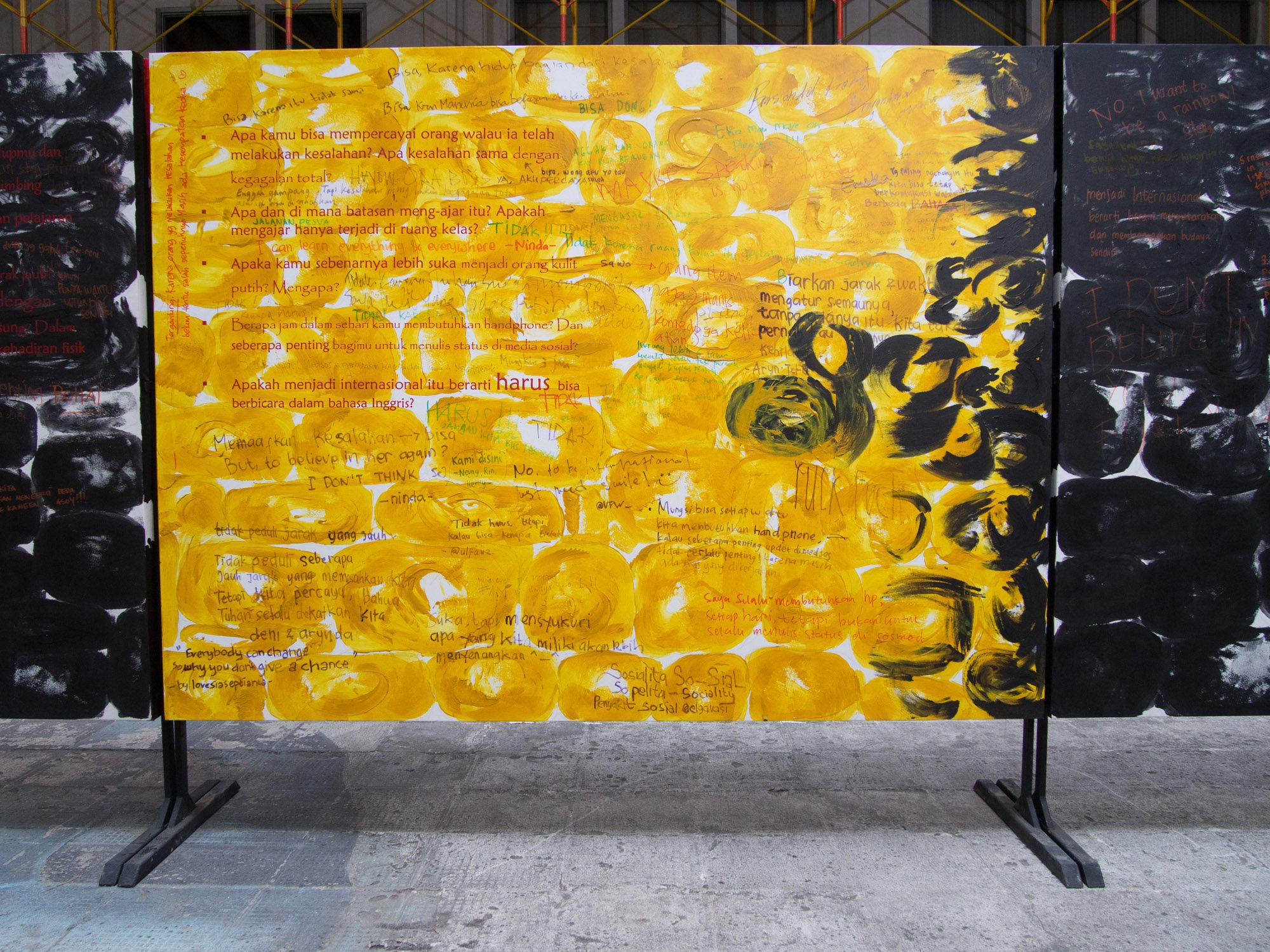 Some of the artists, however, have adopted the open space enthusiastically. Emeka Udemba’s “Street Slam,” for example, consists of an odong odong – a canopied vehicle operated by bicycle pedals, which young Indonesians like riding around in listening to karaoke music – decorated with plastic toys. But instead of karaoke the little screen between the handlebars is showing videos by Indonesian and Nigerian artists – a continuation of Udemba’s art project “Molue Mobile Museum of Contemporary Art”. Anggun Priambodo on the other hand has virtually hidden his video installation, “Voice of Equator”: five-metre bamboo ladders lead up to a sort of tree house. Here visitors can see the impressions the artist from Jakarta was able to gather on film during a residency in Lagos. While the two megacities are alike when it comes to noise and chaos, Priambodo experienced a reaction unusual for Indonesians when most Nigerians were less than thrilled about being filmed by a stranger. With the complicated access to his work Priambodo reflects the difficulties he had when trying to approach people.

Co-curator Jude Anogwih considers the concept of “Hacking Conflict” as an opportunity to make new artistic spaces and dimensions accessible for cultural exchange. “We confront the establishment. We generate creative processes that include the population and bring forth other views,” the Nigerian artist and curator says. “These are the aspects I have been waiting for. And I am proud to be a part of this.”