In a hundred degree heat sits Ode to Frank Gehry and Sixty-five aluminum trays, blue sky encompassing their lines, emphasizing the curvy metallic and furrowed white. This is Noah Purifoy’s (1917-2004) first large-scale monographic show at Los Angeles County Museum of Art. These pieces sit both outside and in the art world – as did Purifoy.

The name Purifoy comes from the English/French ‘of pure faith’ and there is something in his work that conjures a quasi-religious feeling, a sense of wonder and of godliness. The structures are rich with meaning – history and personal narrative fill their frame. Though still, Purifoy’s art has movement to it, as though, when one’s back is turned, metal and wood animate. He used objects that we could identify and attach meaning to: broken electronics, bicycles rusted and forgotten, used trousers and boots.  Embedded within each is the memory of the previous owner and a re-inscription of meaning from Purifoy’s own hand. His relationship to the objects of his work is very strong, taking him from identifying and collecting to re-imagining them. His use of the everyday object is deeply reminiscent of the Arte Povera movement. His large scale and smaller scale pieces have an intricacy and a straightforwardness to them that Dadaism eschewed. In Max Ernst’s works, for example, we see similarities of form and nature with Purifoy, but Purifoy has a much tighter rein on how these objects live together on his handmade platforms. 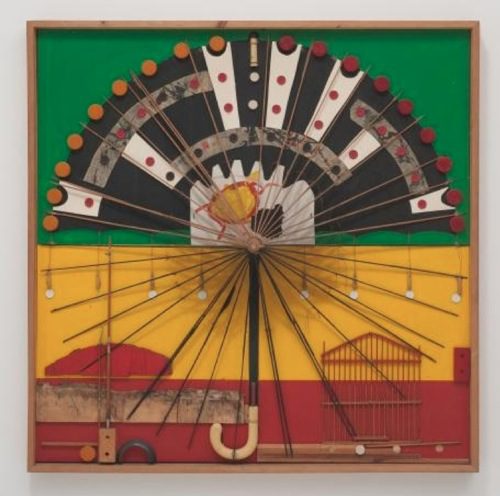 It is a common activity in post-industrial America for residents to cast out their unwanted belongings – vestiges of the over-consumed and reinvented life – and to leave them curbside for others to pick through. Purifoy constructed his assemblages with many of these discarded objects from his local neighborhood, Watts. Mixed within these objects is the narrative of working class America. Watts carries with it a long tradition of involvement with art, the Nuestro Pueblo, fondly known as Watts Towers, began construction in 1921 by Italian artist, Rodia, who built the towers as an emblem to his local community. Purifoy co-founded the Watts Towers Arts Center, next door, as a hub for artists in the neighborhood to exhibit. 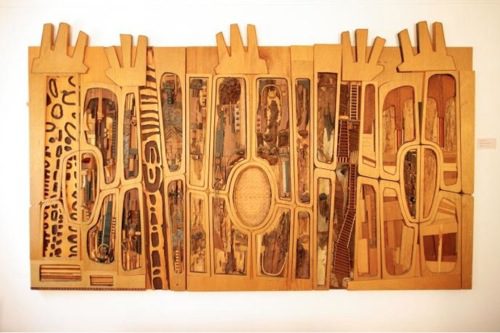 Purifoy was born in Alabama and moved to LA in 1953 to study at the Chouinard Art Institute (now called CalArts). Strongly influenced by Dubuffet’s treatise on anti-art and the elevation of the everyday object, Purifoy found and elicited beauty in the city landscapes that surrounded him. In 1965 after the Watts riots, he toured the show 66 Signs of Neon in response to the decimation of his neighborhood. 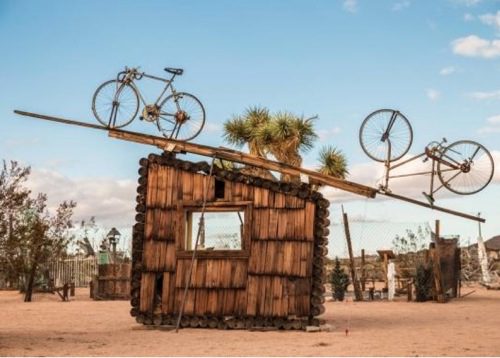 A conceptualist, Purifoy argued that Duchamp was his champion because he left the art movement ‘with the idea that the found object was OK like it was.’  He writes ‘Because of Duchamp I maintained the integrity of the piece, the object I work with, and enable the piece to maintain its originality’. By keeping the ‘integrity’ of an object Purifoy stays true to the conceptualization of art, he reifies his object through his process of gathering and assemblage. 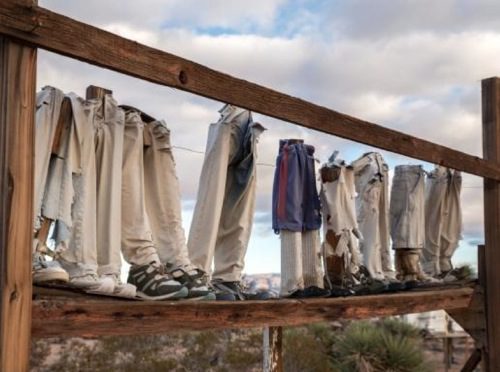 His building of large scale pieces came about with his move to the Mojave desert in the late 1980s. He used the space around him to create a freedom of expression where the art lives at one with the elements. In the city he could borrow leftovers from the streets; in the desert, the leftovers are the same because people are the same, but the backdrop intensifies the art. In the desert he was able to grow his ideas into mammoth scale: corrugated iron, steel remnants from construction projects, bright colored swap meet finds. The dimensionality of these architectural behemoths are a nod to the possibility of space in the desert, to the erection of form in the vast infinitude of desolation. The desert gave Purifoy the space for re-inventing his latest art, and there is a vanquishment of the city in their structure.  In his work he plays with the dreams of the desert, romances us with it and gives agency to the expanse of light, depth and breadth.

Noah Purifoy, Junk Dada is at Los Angeles County Museum of Art until September 27th 2015. Book of the same name published by Prestel.