Protests and visual statements have a tenuous relationship, particularly in South Africa. The intensity and drama of South African history has resulted in large-scale protests and strikes throughout the twentieth and twenty-first centuries.

Right from the late 1970s and early 1980s, posters were being produced by the Medu Art Ensemble in Gabarone, Botswana. More recently, the Cape Town–based arts collective Burning Museum has also embraced the poster medium to create awareness of sustained segregation in Cape Town and modern-day forced removals under the guise of urban gentrification. Protest posters continue to be used as a medium for making a statement in South Africa especially with the recent #FeesMustFall student protests across South African campuses. 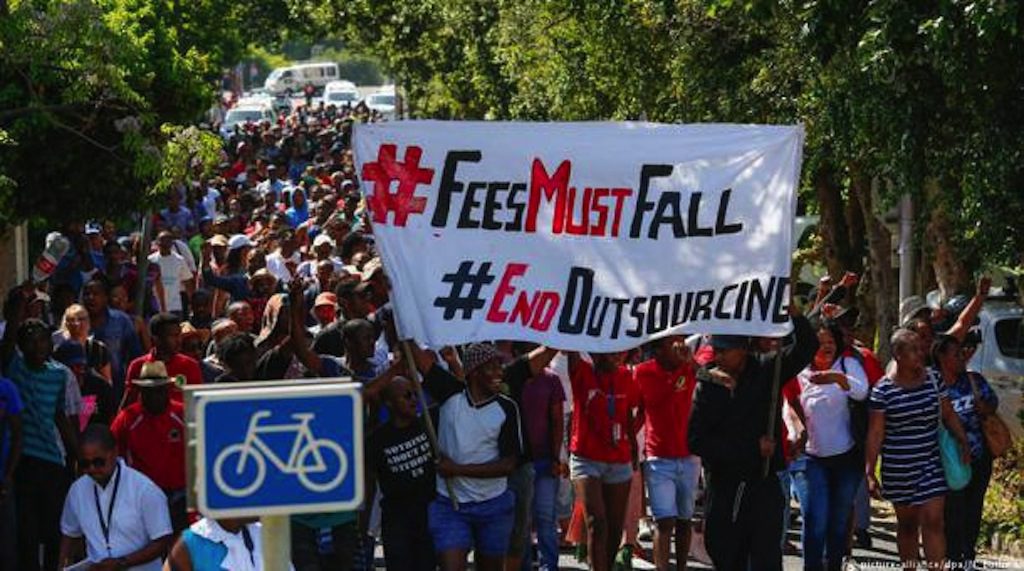 In 1981 the South African rugby team commonly known as the Springboks accepted an invitation to tour New Zealand. This was a highly controversial decision by New Zealand’s national government of the time: to invite an essentially racist team from apartheid South Africa to tour a country with civil democracy. The tension and resentment in New Zealand erupted into large-scale protests. During this process, a number of protest posters were made in objection to the tour. The floodgates opened with at least 150,000 people taking part in approximately 200 demonstrations. One of the matches was completely cancelled and the last test match was heavily affected by clashes between protesters and policemen. This was the height of civil action in New Zealand’s history. The tour had the impact of stimulating considerable debate about racism in New Zealand and the situation of the Māori in New Zealand society.

Over the course of the 1981 tour, a series of protest posters was created in response to the situation. It is captivating to witness how the production of posters arises in times of strife. At exactly the same time, the prominent arts activist collective Medu was producing a range of diverse posters in Botswana, attempting to use graphic art as a weapon to fight apartheid. These political posters would be slipped into South Africa and placed in areas such as townships in Johannesburg accessible to the vast majority of South Africans, as opposed to the suburban galleries and private homes only available to white South Africans. The posters effectively bore messages of protest for the masses. Some of the posters produced in New Zealand have a striking resemblance to those produced by Medu. One such example is titled, “Day of Rage: September 12.” It is a bold blood-red poster utilizing black typography with a prominent graphic of the political activist and icon Steve Biko. Underneath this image are significant dates: 1977, when Steve Biko was murdered, 1980, when New Zealand Rugby Football Union (NZRFU) inviteds BOKS (the nickname for the South African rugby team’s nickname), 1981, when third test match was held between the Springboks and the All Blacks (the name commonly given to the New Zealand rugby team). The design conveys its message powerfully, echoing sentiments felt all over the world at the shocking death of Steve Biko under police custody. 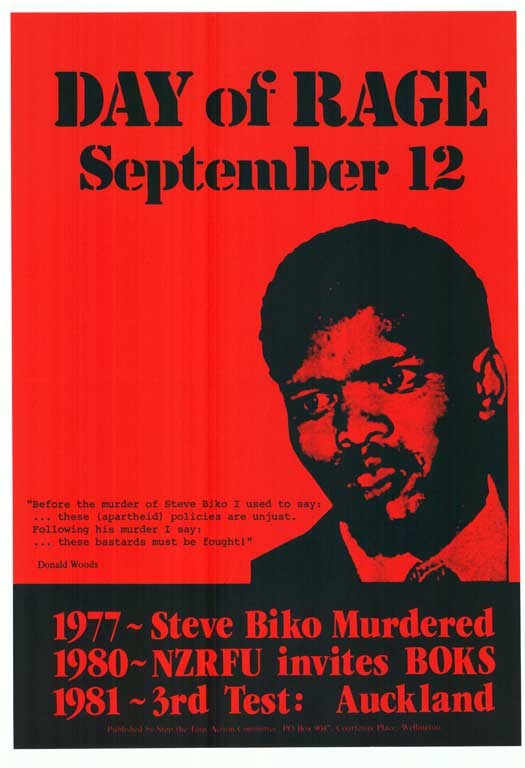 In a more personalized design, another poster from New Zealand in 1981 appeals to the suffering by women of color in South Africa stating, “Unite in opposition to Apartheid. Our sisters in S.A suffer double oppression.”. The complex notion of “double suffering” by an unknown artist argues that women in South Africa had to fight racial and gendered oppression. After recently engaging with a collection of South African art by black artists collected assembled in 1986 for the Weltkulturen Museum in Frankfurt, I noticed that only two female artists, Sophie Peters and Noria Mabasa, formed part of the collection. This included black-and-white linocut prints by Peters and a wooden sculpture by Mabasa. Another female artist, curator and researcher Bongi Dhlomo-Mautloa, was instrumental in making this collection at the Weltkulturen Museum possible. Dhlomo played a vital role linking the collector, German Reverend Hans Blum, to a number of artists scattered across southern Africa. Dhlomo-Mautloa was one of the few black female artists to study at the Rorke’s Drift Art and Craft Centre in KwaZulu-Natal. 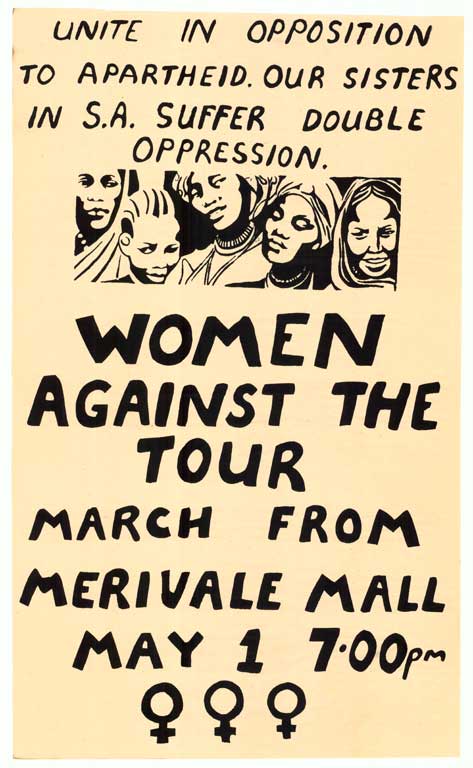 The protest poster movement is still alive and vibrant in South Africa today. The collective, Burning Museum has been creating staging interventions with black-and-white photocopied posters. After designing posters, the collective then prints them out and pastes them with starched wheat glue onto the walls of public spheres, galleries, and museum spaces. This is an incisive way of engaging with different sectors of the public, echoing a method that was embraced by protestors in South Africa in the 1970s and ’80s. The images pasted by the collective act as ghostly reminders memorializing members of communities that who were forcibly removed from their homes in District Six under the Apartheid Land Act.

The desired notion to make statements in public spaces to provoke reaction and reflection continues now in the contemporary moment with the intense student protests that have taken places across all the campuses of South African tertiary institutions in reaction to the government’s decision to increase student fees by 6%. As a result of these large-scale protests, the government had no choice but to cancel the raise in fees for 2016, a minor victory in the youth’s plight to gain access to free education. Posters featured boldly in the protests with a strategic link to the online world through the use of the hashtag symbol, enabling students to follow proceedings effectively. The South African mural artist, Faith47 produced a poster that also went online, allowing it to be downloaded and used in support of the student protests. The poster depicts two clenched fists crossed over one another in a symbol of defiance commonly used by student protestors. Instead of posters becoming null and void, artists and activists have embraced online technology into furthering the power of posters in disseminating content. 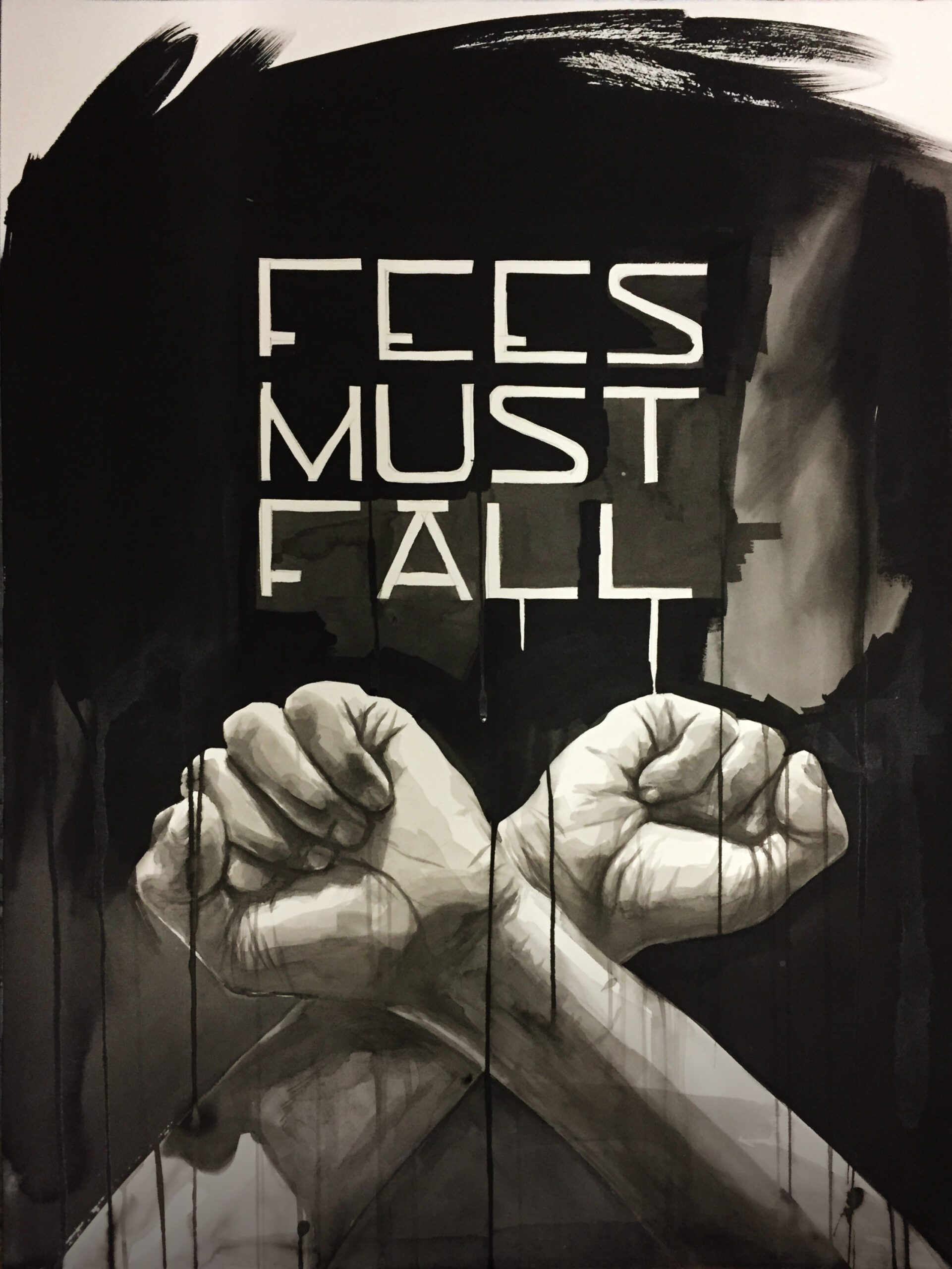 It is fascinating to witness how artists utilize the visual poster in times of struggle. Graphically composed words and images have the ability to convey a message often more potently than the voices of many. It has given us a wealth of visual source material reminding us of the passionate history of South Africa and its citizens’ right to be heard. The poster movement continues to evolve and transform in South Africa with influence beyond its geographical boundaries, as was so evident in New Zealand.

Daniel Hewson is a young curator, writer and cultural collaborator from Cape Town, South Africa. Since graduating from Rhodes University, he has specialised in curating in the visual arts field and in arts education, with a particular focus on printmaking.