Few concepts speak of the personal as political as well as the ideas surrounding "home" and "belonging". From home as a place of art, to the city as a place where everyone is a potential foreigner, this series includes texts exploring how artists and curators reveal and repurpose architecture, gendered domesticity, citizenship and spirituality through art. Texan native Leticia Contreras builds landscapes in her art. Her recurring examination of making and dismantling home is a reflection on her own cultural experience as a “Queer Afro-Xicana Tejana.” In 2019 she completed an artist exchange between Hyde Park Art Center in Chicago and Project Row Houses in Houston, Texas. To C& she spoke about the exchange and her role as an artist, activist, and teacher.

Contemporary And: One of the questions I’m interested in is how you bring the concept of home into your practice—the internal, the spiritual, the ritualistic.

Leticia Contreras: Knowing that those row homes [in Chicago’s Hyde Park Art Center artist exchange] evoke so much history I wanted to play with the structure and make it more fluid. I was thinking about being on the gulf coast, about our relationship to water and climate change. It’s like this twofold idea of having space to see each other and witness each other’s practice, and to strategize and create visions for the future. I was really impacted by this last round of socially engaged artists who had an installation called How We Respond to Social Emergencies.

We have to think about the collective and celebrate collective knowledge. My own roots and knowledge that have been passed down to me are about seeing water as a thing that shapes the world around it and the elements held within its context. About all of the memories, the beauty and joy, and also the trauma that lies within the water and our bodies; and how water shapes communities, lives, and landscapes. So instead of trying to control that, how about negotiating and having a conversation with this environment?

C&: I love how you think about water holding shape, which reminds me of Ellen Gallagher’s exhibition Accidental Records at Hauser and Wirth in LA. It also makes me think about your sculptures and your choice to work in fiber.

LC: I think the fiber takes me back to being at home and to the traditions that were passed down to me. I like those materials because I like to celebrate the artistry of Abuelita knowledge that isn’t often celebrated in high art. I like to address the working class knowledge that is often practiced amongst people working in textiles, whether it’s a seamstress or my grandmother. I’m really interested in the lineage of quilt-making, especially in the South. I like the idea of quilt-making as a storytelling device and also this practice of keeping you warm and giving you comfort. 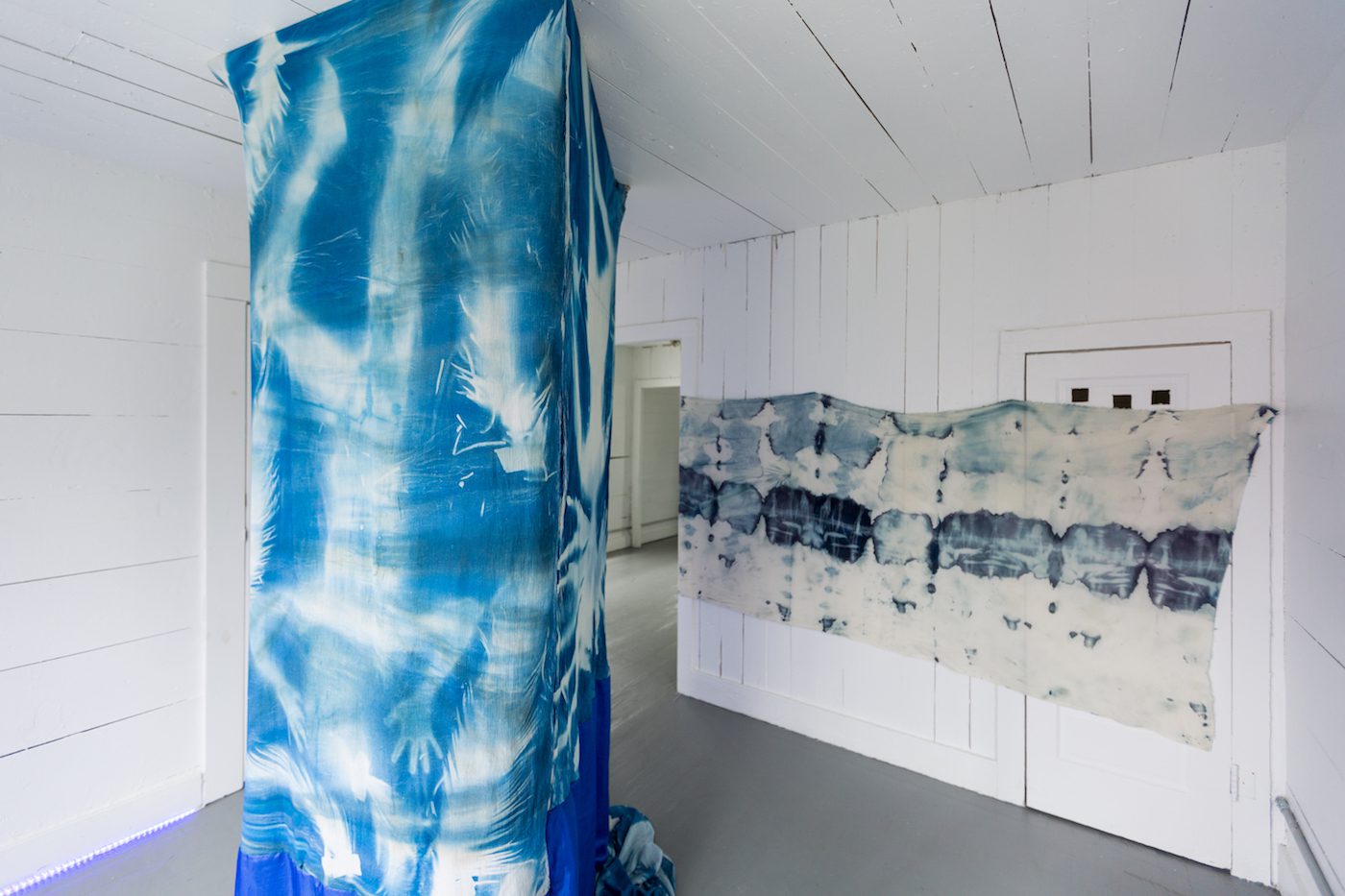 C&: So much about your practice is about location and place and how you describe yourself as Afro-Xicana.

LC: What was really fun about the show at Project Row House is that some of the artists have known each other for years, while many of them had never met before. And to see the synchronicity of the work and the materials that we are choosing fascinates me. One of the things I think about with quilts is the Southern Black tradition, how the stories were stitched into it, like maps for guiding you North. Oftentimes when we think about the Underground Railroad we don’t think about the huge wave of migration that went to Mexico, because Mexico had abolished slavery. I often think of myself as a Southern/Global South artist and a carrier of those stories, traditions, and knowledge.

I am highly influenced by embroidery and bordado and how it is used in Mexico to identify your tribe and your people. It wasn’t until the 1960’s that we had these other spectrums of colors because of the artificial colors that were introduced into the market. Before that we were working with natural dyes from insects, plants, and fruits from our communities, which again ties me back to the loving tradition and the relationship to the land.

Being creative first off is such a vulnerable space. Especially being artists of color, we’re always expected to talk about the trauma and the violence that happens in our communities. But we are complex beings, there’s so much more to us. So, can the other stuff be celebrated, please?

C&: This seems very specific to the South, how does that influence your approach to work?

LC: I’m from Louisiana, from the Black diaspora and third generation of what we call Texas, and my great grandparents once migrated from Mexico. The South West has been what’s known as Mexico a lot longer than the United States, and those are important histories for us to think about. I think that claiming an identity as Afro-Xicana is like a soft “fuck you” to the establishment because we were torn away from that identity. It also affirms that we can define home and that home can be in so many places which, too, is ok. Texas has this really interesting dynamic, Houston specifically, because it’s a port city next to Galveston. It teeters between a Northern and Southern relationship between Global South and North and between the South West and South Eastern historiography.

C&: What are you working on at the moment?

LC: I’m currently working on a large scale textile piece that will measure 20ft x 20ft titled Suficiente Sustento (Sufficient Sustenance). Around those works there will be several hanging pieces that contain different gentle reminders to take space. It is an invitation for those who define themselves as folks of color, belonging to the non-binary community, indigenous, poor or working class. They can all take one of the smaller hanging pieces home with them and anyone who identifies as white and/or wealthy can make a donation to the cause and can also take one home.

Leticia Contreras is a queer, afro-xicana, interdisciplinary artist and cultural organizer born and raised in Houston, TX. Her work explores themes of embodied memory, radical joy, and our relationship to each other and our environment. She uses materials that draw from the natural world, both as inspiration and materials. Leticia engages a variety of media; photography, installation, and performance to unveil the stories of a place. Viewers cross the boundaries of witnessing and participating.

“My Work Is Black, Feminine and Marginal”

In Conversation with Nikita Gale