With two works at documenta 14 in Kassel, artist Regina José Galindo unpacks the city’s loaded and cloaked history as one of Germany’s biggest arsenals. Author and artist Jota Mombaça looks into how Galindo points at the entanglement of the apparatuses of art and war in the context of a major art event.

The sniper position in Galindo’s piece El Objectivo (The Objective), 2017. Photo: Courtesy of the author

The image below is a ready-made found by a friend checking the map of Kassel in the Google Earth app. I am calling it a ready-made because, in Kassel, art and weaponized power are more entangled than one might realize at first sight. Germany has one of the world’s biggest weapon industries, and because Kassel once played a central role in that economy (during the so-called Second World War a Kassel company, Henschel & Son, which produced transport equipment, flourished through the manufacture of war tanks Tiger I and II), to the extent that this image was brought up by my friend when we were talking about the two works by Regina José Galindo in Kassel’s documenta 14.

Galindo is a Guatemalan artist whose work is particularly concerned with necropolitical updates in contemporary societies. Her work has often addressed and challenged the naturalization of death, the rituals of genocide (specially feminicide), and weaponized regimes. At Kassel, she presents a video-installation on the first floor of the Palais Belevue, and a performative installation on the second floor of the Stadtmuseum.

The project at the Stadtmuseum is called El Objectivo (The Objective). It consists of a white chamber with an internal room and an external corridor with four spots from which one can see inside the chamber through the sights of four G36 assault rifles. The performative aspect has to do with the possibility of entering the chamber to choose a position as the target, or playing with a gun as the sniper. The artist has activated the performance in several sessions by positioning herself inside the chamber as the speculative target of audience members’ thirst to play and look. 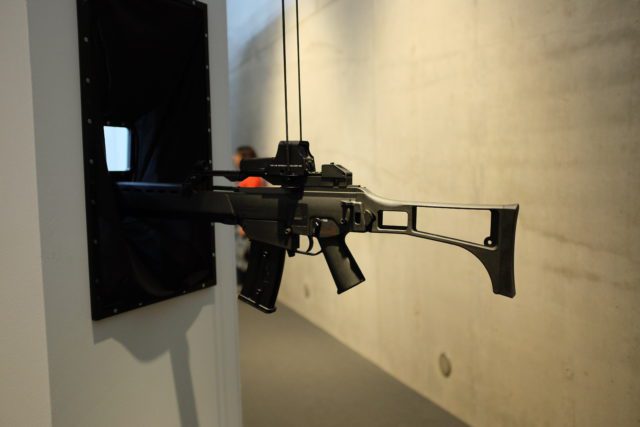 The sniper position in Galindo’s piece El Objectivo (The Objective), 2017. PhotoCourtesy of the author

The work at the Palais Belevue, titled La Sombra (The Shadow), is a video of Galindo performing with a Leopard tank. The “shadow” is the moving tank, from which the body of the artist runs until exhaustion. It looks just like the ones parked in the parking lot in the screenshot my friend took on Google Earth. Galindo’s video-performance thus brings the unsuspected geography of Kassel’s weapon arsenal into the exhibition space of documenta, simultaneously evidencing the entanglement of the apparatuses of art and war in the context of documenta 14, and the contradictions of her own work as a critical device situated within the framework of the problem.

Galindo’s works, as part of a broader curatorial position, help us see more than just the artsy aspect of Kassel’s economy and political presence in the world. Confronting the exhausted body of the artist running from the shadow of the tank, we are pushed to see the leopard lying in the room – or, more precisely, location 51°20’11.1″N 9°29’06.0″E of an online map of Kassel. Yet in seeking to do more than simply break the veil that prevents critical acknowledgment of the facts of war within the art world, both Galindo’s works go beyond the art-washing of social conflicts.

Specifically, Galindo’s concerns with the body in relation to the weapons industry allows her provocation to go beyond of the allegorical scope of macro-social critiques. Her performative intervention invites us to take into a serious consideration crucial ethical questions: Where are you situated within the global state of siege? How do you position yourself in relation to the social politics of death that destroy the right to live in peace across the world? And when you’re in a position to pull the trigger, how do you not do it?

Jota Mombaça is a non-binary bicha, born and raised in the northeast of Brazil, who writes, performs and academically studies on the relations between monstruosity and humanity, kuir studies, de-colonial turns, political intersectionality, anti-colonial justice, redistribution of violence, visionary fictions, the end of the world and tensions among ethics, aesthetics, art and politics in the knowledge productions of the global south-of-the-south. Current works are the collaboration with Oficina de Imaginação Política (São Paulo) and the artistic residency along with Capacete’s 2017 at Documenta (Athens/Kassel).

In The Surrounds of History