Seeing Deeply is an essential monograph that covers four decades of celebrated photographer Dawoud Bey’s prolific career. It strives for far more than a mere survey, and instead profiles—through its nine essays and over 250 images—how a series of seminal projects and encounters have helped shape Bey’s singular vision. An artist whose craft draws forth the nuances of human expression, Bey shares as much about his subjects as he does about himself in this intimate and important book. In this interview, executive director of NXTHVN Nico Wheadon speaks to Dawoud Bey about the artist’s formative years, 1970s Harlem, and the subject's hands as vehicles of expression.

A Woman Waiting in the Doorway, Harlem, NY, 1976. Photograph by Dawoud Bey

Contemporary And: In Seeing Deeply, Harlem features as a bookend of sorts, with Harlem, U.S.A. (1975-1978) introducing us to your early street portraits, and Harlem Redux (2014-2017) delivering us full circle to a drastically transformed neighborhood. Subjects, once captured in striking black and white, recede from foreground to background, as the street itself takes center stage, rendered in a palette of construction site oranges and greens. Can you talk us through some of these formal shifts? What transpired between 1978 and 2014 to inform this new approach to echoing the spirit of the street? 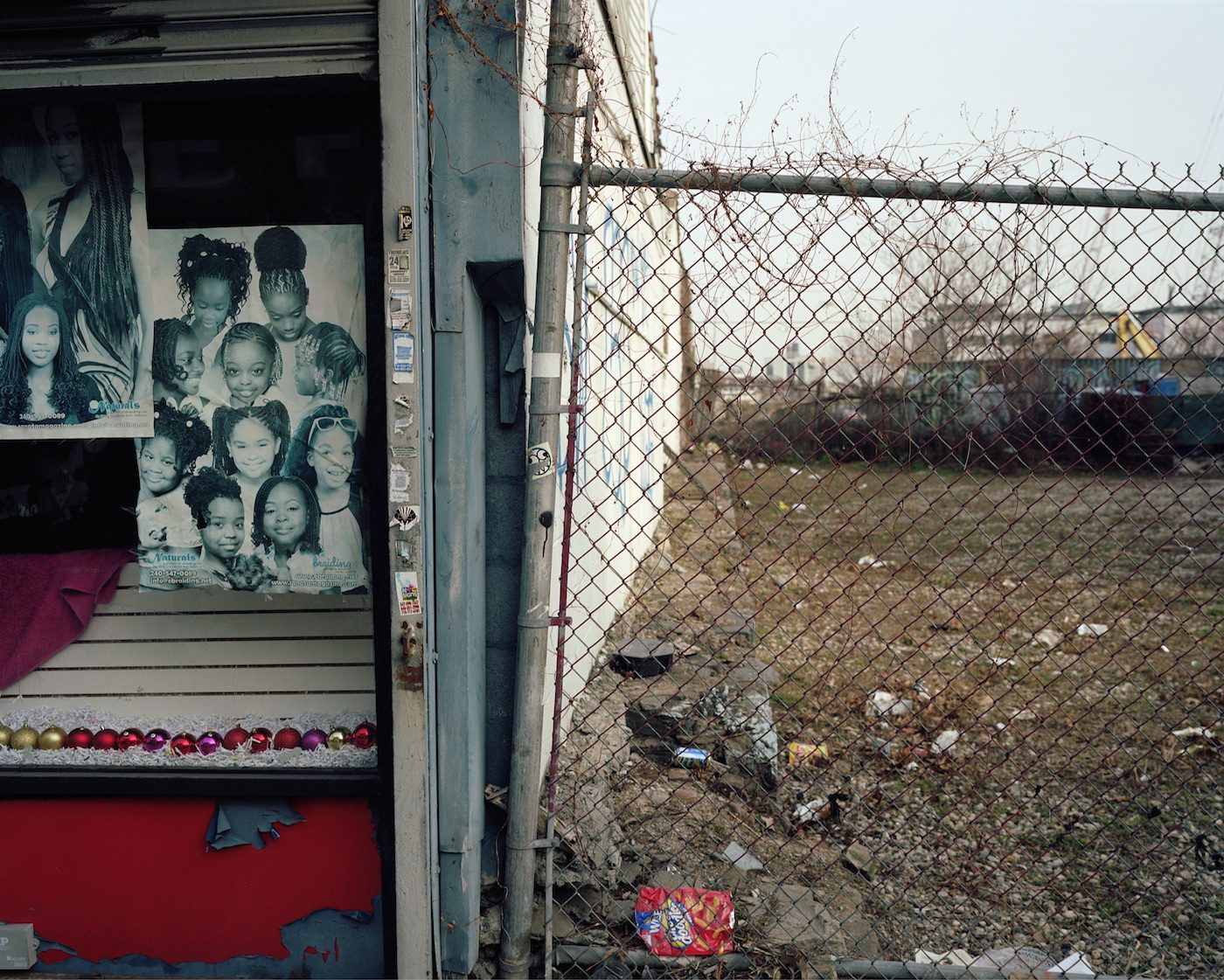 Dawoud Bey: I always feel that the form of the work comes out of a set of questions that I ask myself from the outset, usually questions about the “what” and the “how”; what to make work about, and how to give it form. When I started making the Harlem, U.S.A. photographs, I had spent a lot of time looking at the photographs of Walker Evans, Dorothea Lange, Roy DeCarava, James Van Der Zee, and others from that kind of picture making. My work at the time was a conversation that wrapped this history around the contemporary Harlem community in 1979 and its history, adding something. And these works were in black and white, the material of the photographic past. Forty years later, I was a very different kind of artist and photographer. Whereas Harlem, U.S.A. was about making an honest representation of the people in the Harlem community, in 2014 I wanted to describe the way the landscape and geography was changing, to make work there while it was transpiring, and to describe the spatial shifts and disruptions that were happening around the people in Harlem. That required a different formal and material language to describe a very contemporary set of circumstances, including color, a direct material signifier of the now that underscores these images’ conspicuously contemporary nature. It took me a year to figure out the form, since it was the first time that the environment itself was the primary subject of my work. 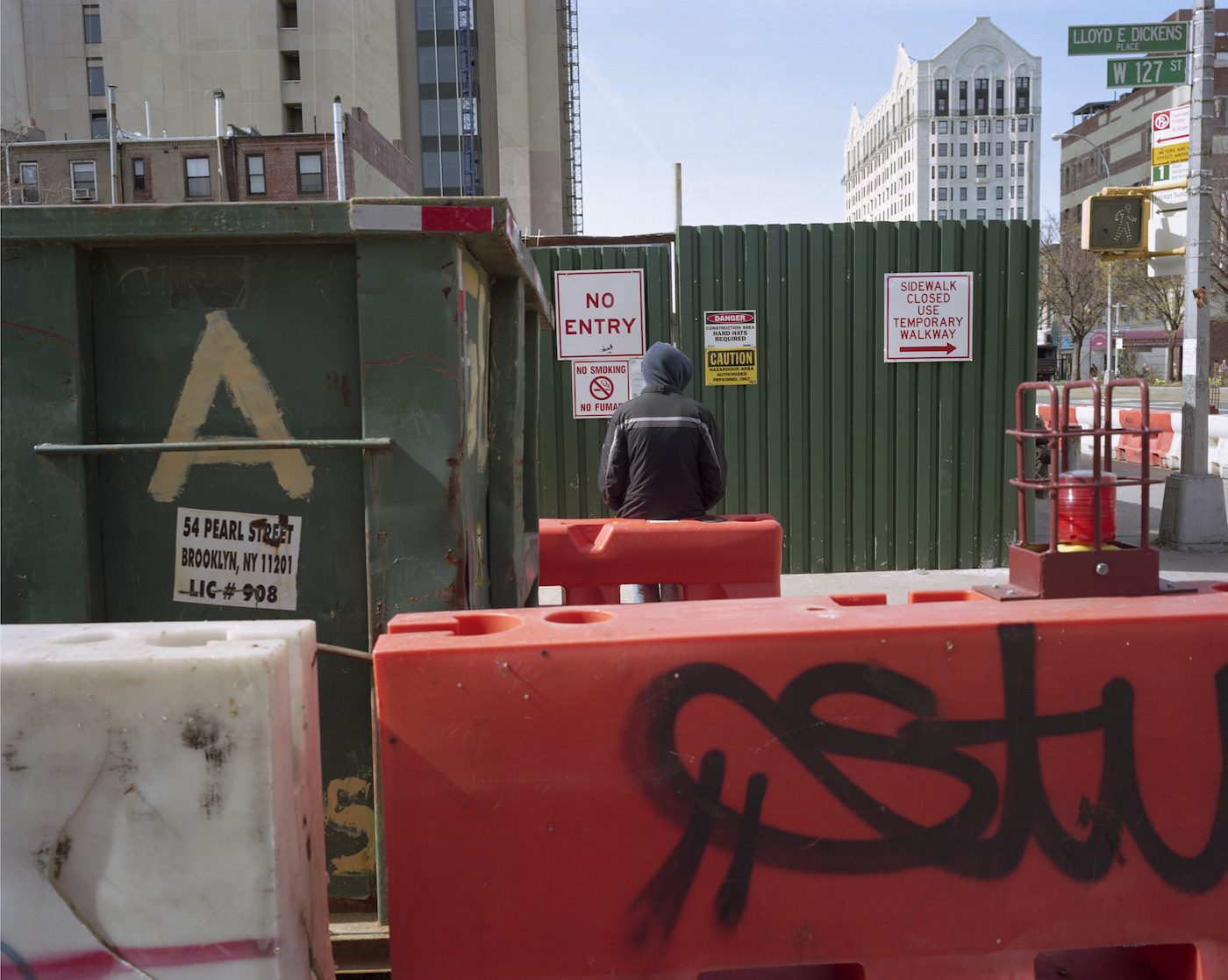 C&: I’m interested in how the environment more broadly figures into your practice. I suppose I’m describing the space around your images, your extreme presence within it, and the imagined proximity between your body and other bodies in that space. In the chronology, you mention making your first museum visit to New York’s Metropolitan Museum of Art (MET) to see Harlem on my Mind in 1969, a year after receiving your first camera. Around that same time, the Studio Museum in Harlem was burgeoning a social nexus for you. What does Harlem mean to you, on both the personal level and as a cultural ecosystem? How did these formative experiences help shape your understanding of self, both as an emerging artist at the time and in relation to your environment? 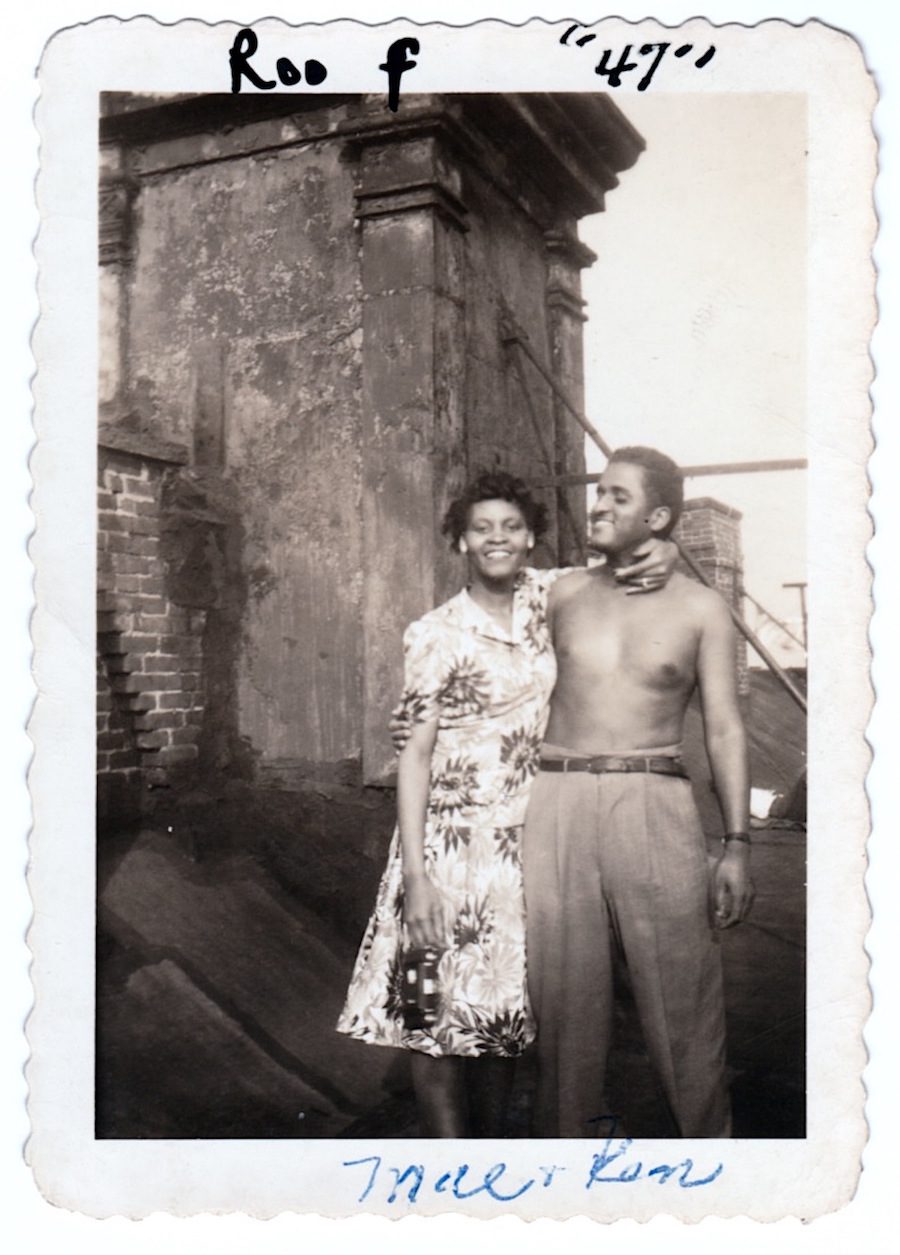 DB: Harlem is both the beginning of my personal narrative and the place where I first began to work out how to translate my experience of the world into resonant and meaningful photographs. My mother and father met in Sugar Hill in the 1940s in St. John’s Baptist Church on West 152nd Street, and settled just around the corner on West 151st St. When I was sixteen years-old, I encountered James Van Der Zee’s memorable photographs in the Harlem On My Mind exhibition at the MET and, a few years later, I started spending time at Studio Museum in Harlem (SMH). At the time, I was transitioning from a career as a drummer to becoming a photographer and artist, and was asked to teach a photography class at the museum which is how I met Carrie Mae Weems, then my student and now one of my closest friends. SMH was where I began to form my community, a community of Black artists my age and from an older generation, including Mel Edwards, Jack Whitten, LeRoy Clark, Barkley Hendricks, Willie Birch, and so many others. They were either exhibiting, in residence, or attending exhibitions there, and have everything to do with the values that informed my work, both then and now. It’s also where I had my first solo exhibition in 1979, the critical response to which began my career. It was important to me that the Harlem, U.S.A. photographs be shown first in that community. 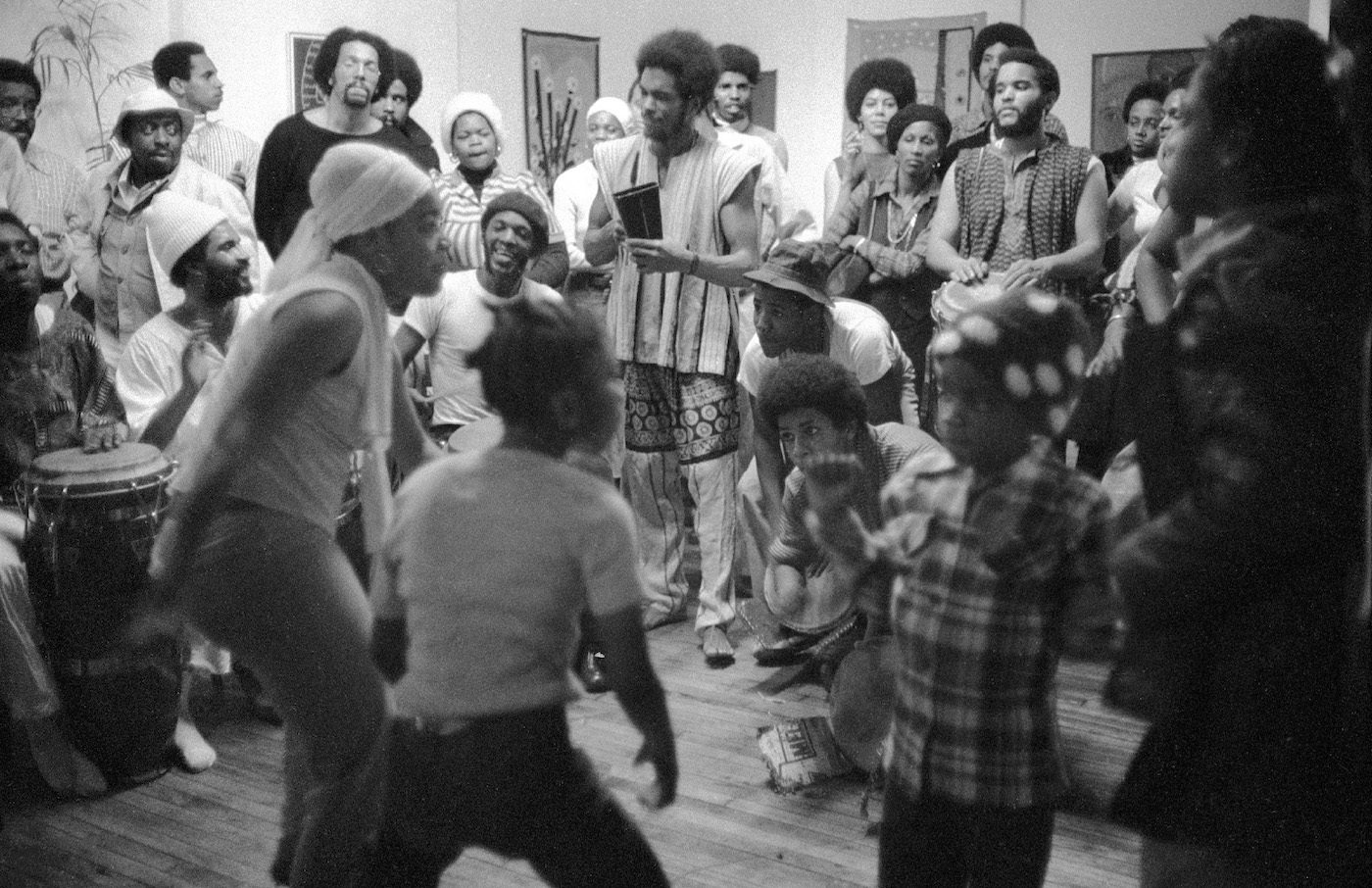 Dawoud Bey playing with drummers and dancers at the Studio Museum in Harlem, 1977. Photograph by Marilyn Nance

C&: I imagine you are an artist who learns as much from your community of practice as you do from the community of subjects that you photograph. I was struck by Hilton Al’s response to your small camera work. He so aptly states, “…what he loved about the images was how each of the subjects held their own self-validation in their hands, their eyes, without being reduced to an ideology—you know, equating Blackness with nobility, that kind of thing. It was such a relief, to see works of art made out of real lives, as opposed to real lives being used to reflect the artist’s idea of it.” I hear in his words a palpable agency that feels hyper-visible in your black and white Street Polaroids of the late 80s and early 90s. The role your subjects’ hands play in foregrounding an essential aura is profound. What do a person’s hands invite you to learn about them? 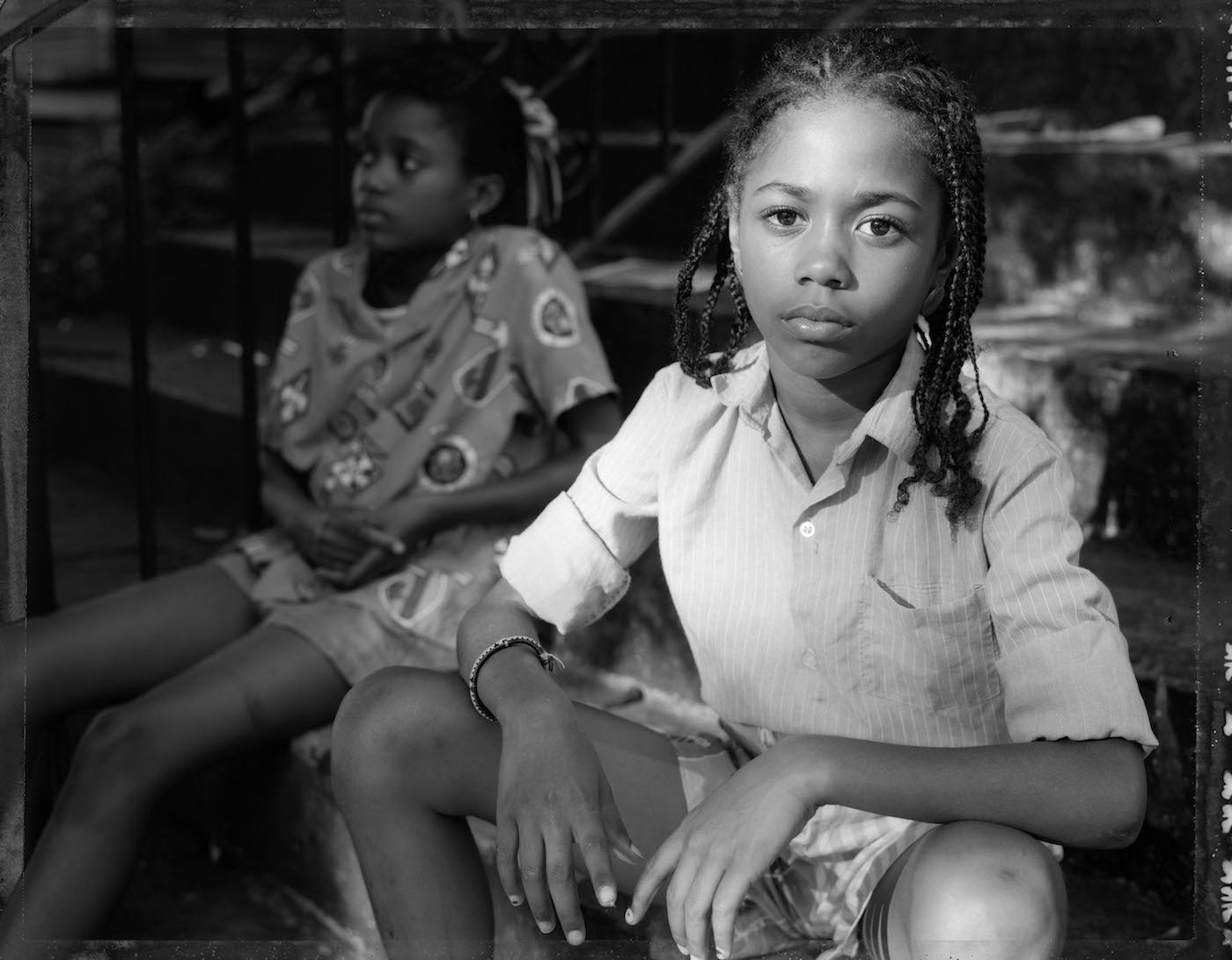 DB: When I went to see the Charles White exhibition recently at MoMA, I spent a lot of time looking at the hands in his work—he does them marvelously. He clearly understood the hands as both expressive vehicle and gesture towards interiority, or the rich interior life of his Black subjects. And that’s what the hands are for me—they convey how a person feels about themselves and the world, how they interact within their own bodies and outwardly with the physical world that they inhabit. In my portraits, I’ve always been highly attentive to the hands and to gesture, directing the subjects to a gestural behavior that is theirs, that gives a resonant sense of who they are. 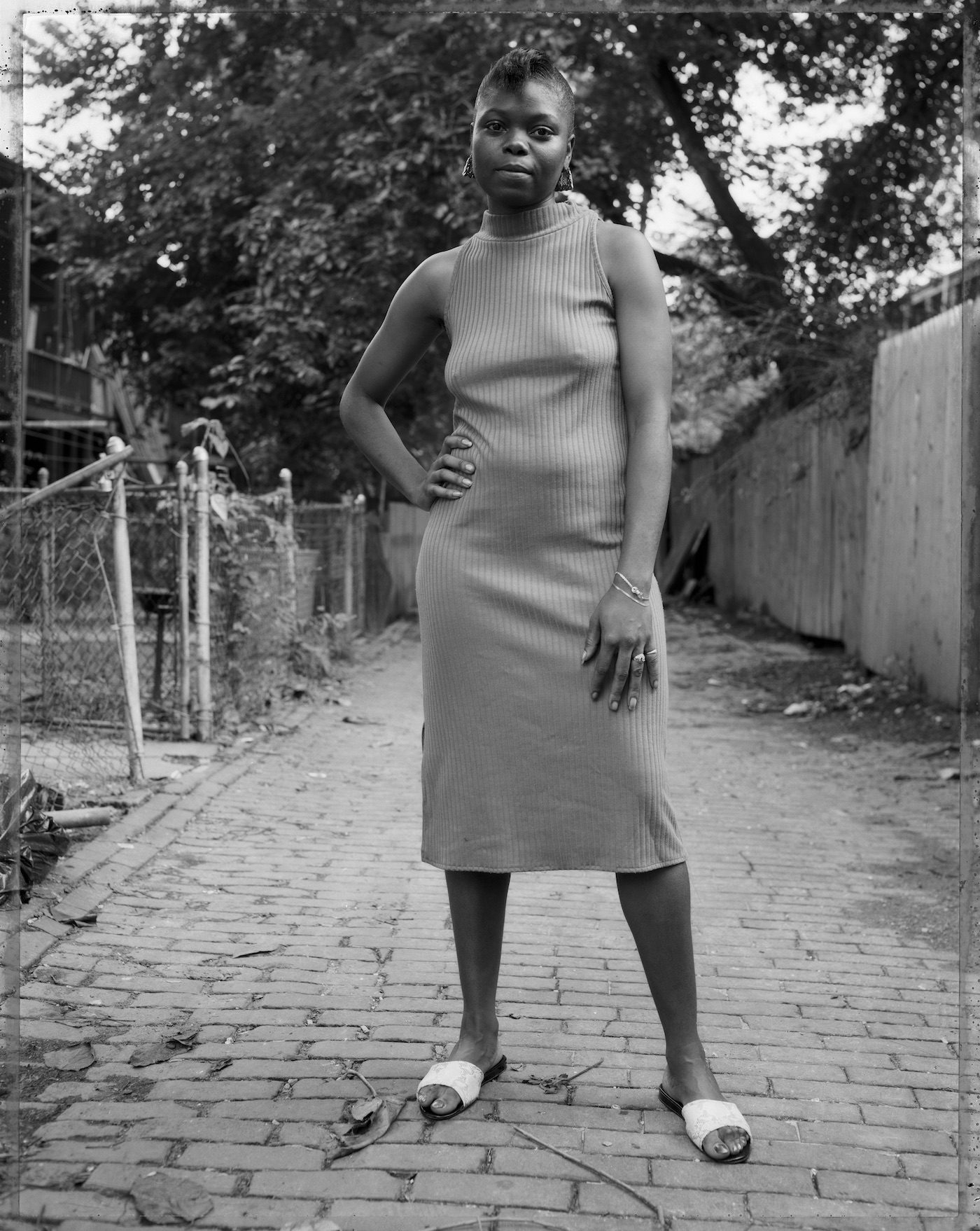 A Young Woman Between Carrolburg Place and Half Street, Washington, DC, 1989. Photograph by Dawoud Bey

C&: Are there any parting thoughts you’d like to share about the genesis of “Seeing Deeply” as a title for this monograph? What do those words carry for you?

DB: When I was trying come up with a title for the book that suggested what it is I’ve tried to do in all of my work over these past forty plus years, the idea of seeing deeply, looking beyond the surface of a thing to describe its complexity, seemed to sum it all up nicely. 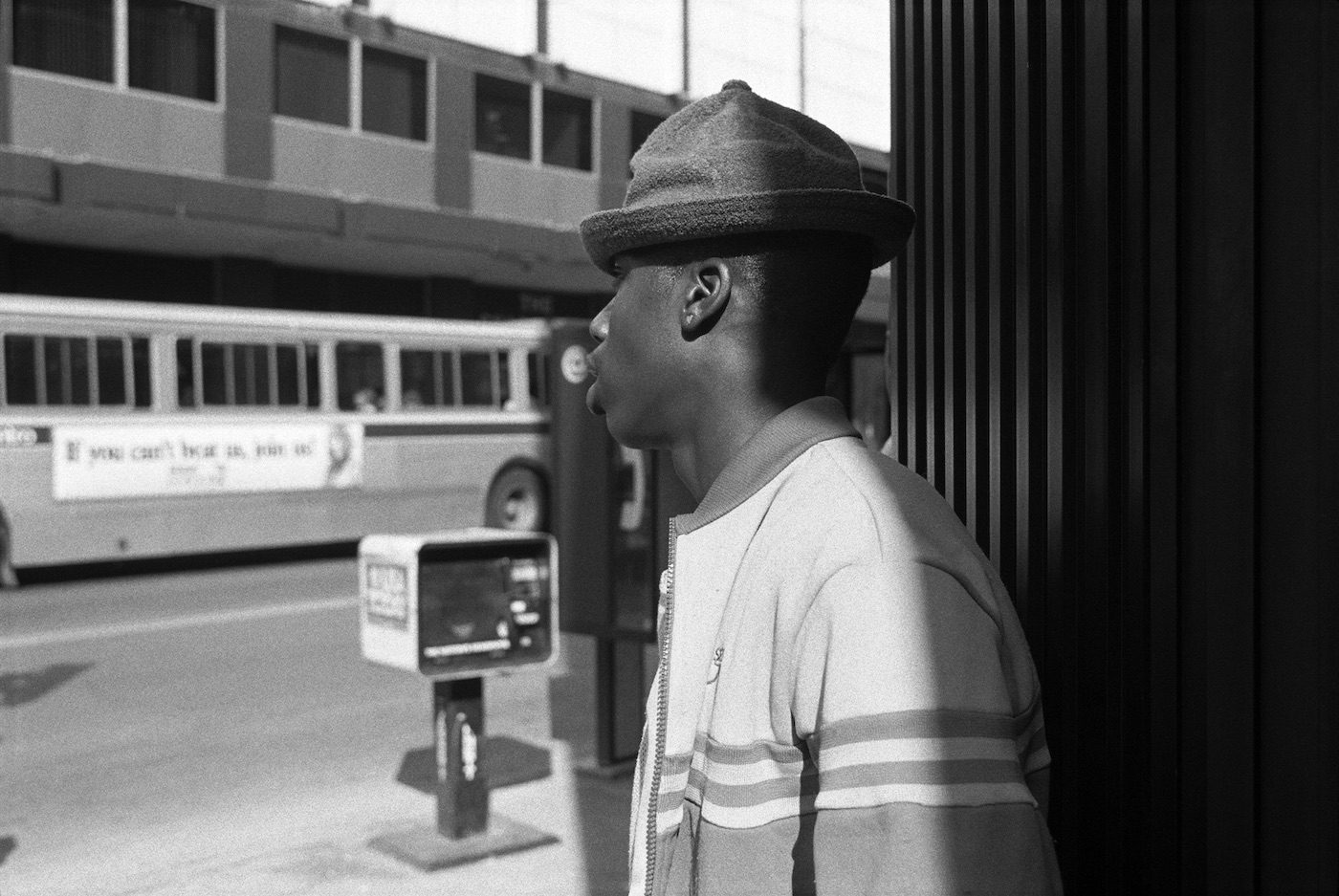 A Young Man at the Bus Stop, Syracuse, NY, 1985. Photograph by Dawoud Bey

Dawoud Bey (1953- ) born in New York City, began his career as a photographer in 1975 with a series of photographs, “Harlem, USA,” that were later exhibited in his first one-person exhibition at the Studio Museum in Harlem in 1979. He has since had exhibitions worldwide, at institutions such as the Art Institute of Chicago, the Barbican Centre in London, the Cleveland Museum of Art, the Los Angeles County Museum of Art, the Detroit Institute of Arts, the High Museum of Art in Atlanta, the National Portrait Gallery in London, and the Whitney Museum of American Art, among many others.

Nico Wheadon is executive director of NXTHVN, a multidisciplinary arts incubator in New Haven, Connecticut. She is an adjunct assistant professor of Art History and Africana Studies at Barnard College, and Professional Practices at Hartford Art School within the interdisciplinary MFA program. Wheadon is an independent writer and regular contributor to The Brooklyn Rail, with her first manuscript slated for publication by Rowman & Littlefield in 2020. She is the former director of public programs and community engagement at the Studio Museum in Harlem, where she was celebrated for the pioneering artist projects, community engagement initiatives, and strategic partnerships she delivered during her five-year tenure.