In his latest exhibition in Nairobi, Kaloki Nyamai investigates what happens when fire is a form of familial erasure through painting and performative installations. He examines reparations via recollections of tragedy, while suggesting healing, unification and preparation for a new start. Kopano Maroga writes about how Kaloki Nyamai’s exhibition Mwaki Nginya Evinda Enge (The Fire Next Time) engages with ideas of Black precarity and spectacle.

It’s a strange task writing about an exhibition from a distance. There’s an element of divination and distillation akin to the ancient art of scrying – telling the future through signs and foreshadowings from crystal balls, mirrors, tea leaves, or fire. The precarity that lies therein being: “How do I discern what lies therein with certainty?” Misinterpreting signifiers can have a high price, most especially when dealing with the ideas, emotions, and practices of others. It’s important to be aware of the stakes of misrepresentation when foraying into divination. From the faintly mirrored surface of my computer screen I sat looking at pictures and videos of Kenyan artist Kaloki Nyamai’s exhibition Mwaki Nginya Evinda Enge (The Fire Next Time), curated from afar by South African curator Khanyisile Mbongwa at the Circle Art Gallery in Nairobi. I later interviewed both Nyamai and Mbongwa to further attune my scrying, and found myself in good company – both artist and curator spoke of processes of divination and distillation, albeit through differing mediums. Nyamai’s are the mediums of embodied intervention and visual art, while Mbongwa’s are spatial and energetic interventions and propositions. The result was a collection of thoughts, questions, considerations, frustrations, and an intense desire to get to the nucleus of “the thing,” to articulate with surgical precision the work’s intention, process, and result. A gathering of sorts. 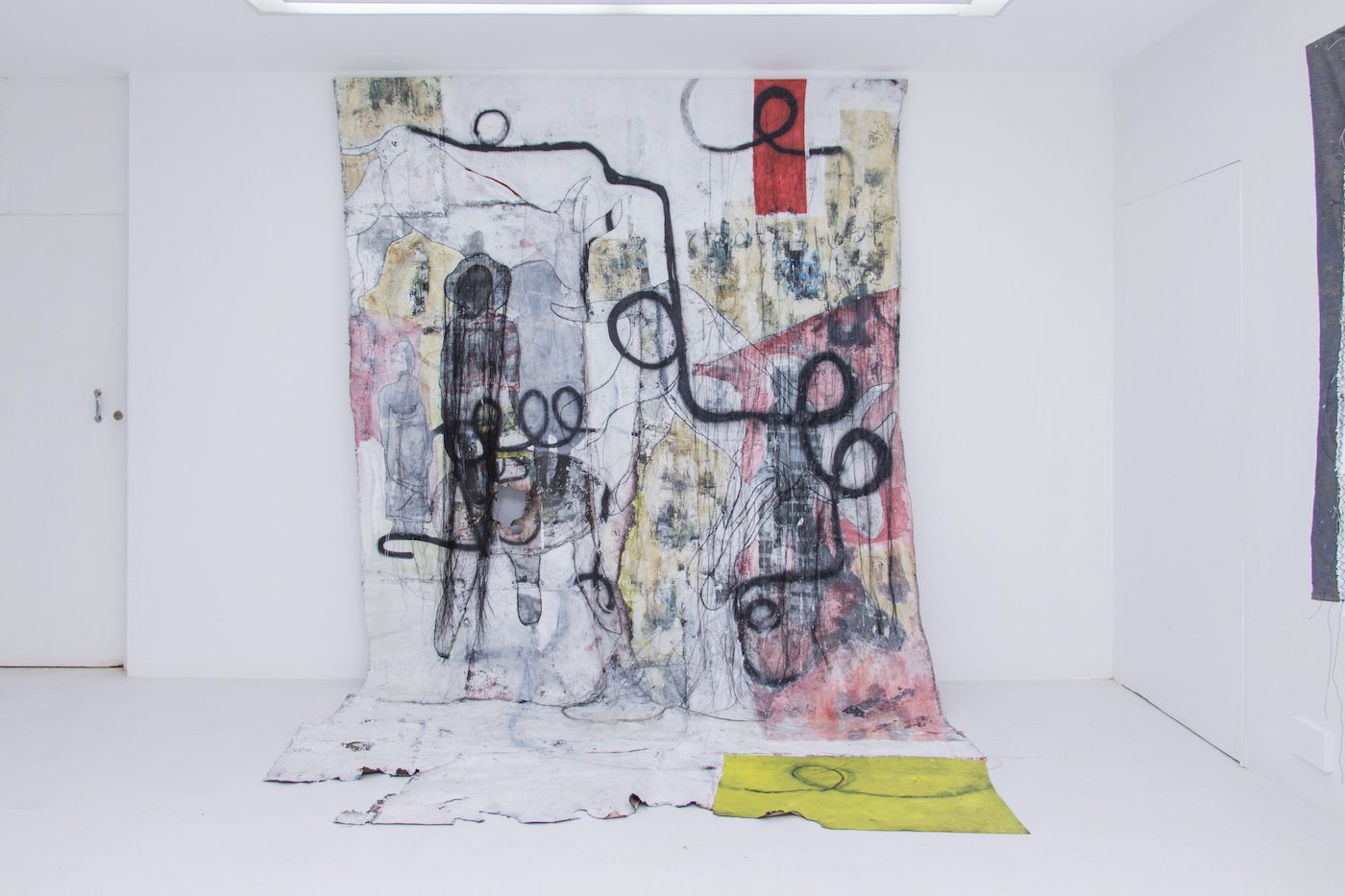 Another Black maker invoked in this gathering was James Baldwin, who wrote the two-essay book whose name was borrowed for Nyamai’s exhibition title. Baldwin wrote in letter form to his fourteen-year-old nephew in My Dungeon Shook — Letter to my Nephew on the One Hundredth Anniversary of Emancipation, detailing the central role of race in the construction of the USA, and then on his relationship with the Church as a youth in Down At The Cross — Letter from a Region of My Mind. The intimacy that is achieved by these texts as they expound on themes simultaneously personal and political, sacred and social, is a quality reflected in Nyamai’s work. Each artwork is a carefully constructed yet cacophonous litany featuring the shaded silhouettes of people and animals – shades, ghosts, and half-rememberings. Another invocation – perhaps of those we have lost to too many fires. Just over some weeks ago at the time of writing this, on 15 January, there was an attack on the DusitD2 hotel and business complex in Nairobi, which saw twenty-one dead and dozens injured. The attack was reportedly carried out by Somali-based Islamist group Al-Shabaab. In Cape Town, just three months ago, thousands were displaced in fires in informal settlements in Khayelitsha and Philippi, with one person dying in the fires in Khayelitsha. These are all areas predominantly populated by people of color. The precarity of Black life is a leitmotif that is all to familiar for those of Black experience.

In my conversations with Mbongwa, they insisted on their desire to move towards a practice of emancipation, joy, and play in their curatorial practice. “Why do we still need to be in pain as Black people?” they asked me – a response to the consumption of trauma porn and Black suffering that litters media outlets far and wide. The fact of the precarity of Black life at this – late capitalist, post-colonial, neocolonial, patriarchal – juncture of human history is one that is perfectly clear, so why does there remain a subtle though proliferate expectation for articulations of Blackness to be underscored by pain, almost as a qualifier? Mbongwa neither ignores the fact of Black pain nor centralizes it, but seeks ways to hold it in tandem with the multiplicities contained in human experience, approaching a practice of “curating as curing.” Curing in the sense of “healing” and “emancipating,” but also of “preserving.” Mbongwa believes archival, embodied interventions to be seminal. Colonial contact with Black people and people of the Global South has resulted in a displacement of archives and, in turn, a displacement of self. Here, Mbongwa proposes that the archive to which we can look with the most veracity is the one we carry with us: our body. Thus Mbongwa encouraged Nyamai to take their artistic practice toward a live, embodied practice for the purposes of this exhibition. 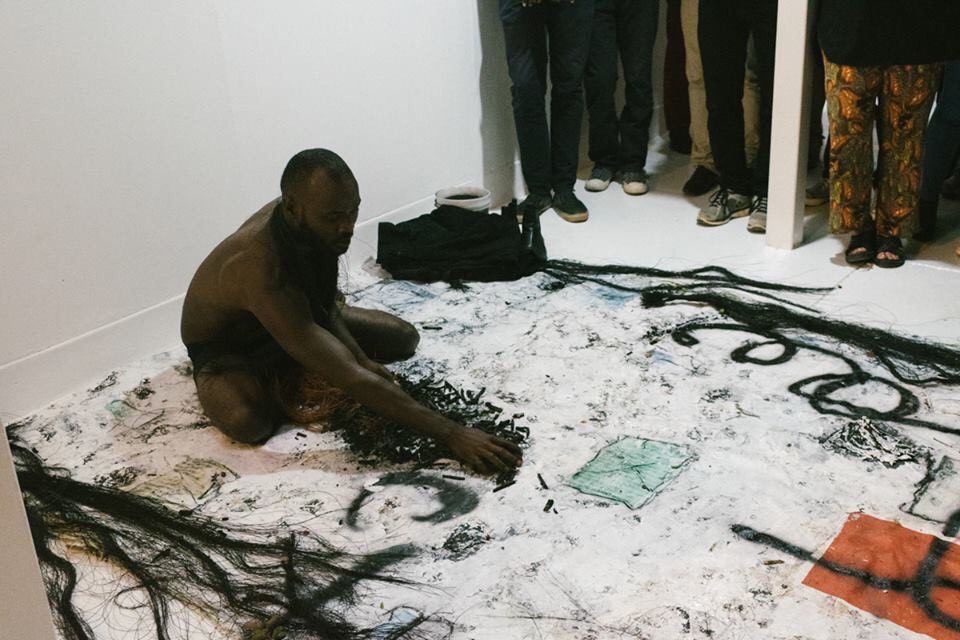 The resulting intervention in Mwaki Nginya Evinda Enge was Nyamai’s first public foray into utilizing live performance as a medium. It is worth noting that both Mbongwa and Nyamai are adamant on conceiving of this kind of work not as “performance” but as “intervention,” the former implying that the work is somehow removed from the here and now whereas the latter implying a confrontation, a moment of “bringing attention to” – an extravasation of affect. Though a seemingly simple semantic supplantation, the implications of this kind of thinking with regard to “Black performance art” are important. Underscored by a not-too-distant history of being put on display in museums, human zoos, and galleries, the “performativity” of Blackness and the consumption of it remain in much contestation at the contemporary moment. Though the shift from “performance” to “intervention” does not necessarily interrupt this colonial logic, it certainly offers us a way of languaging the process by which we consider the decolonization of the Black body in these contexts. 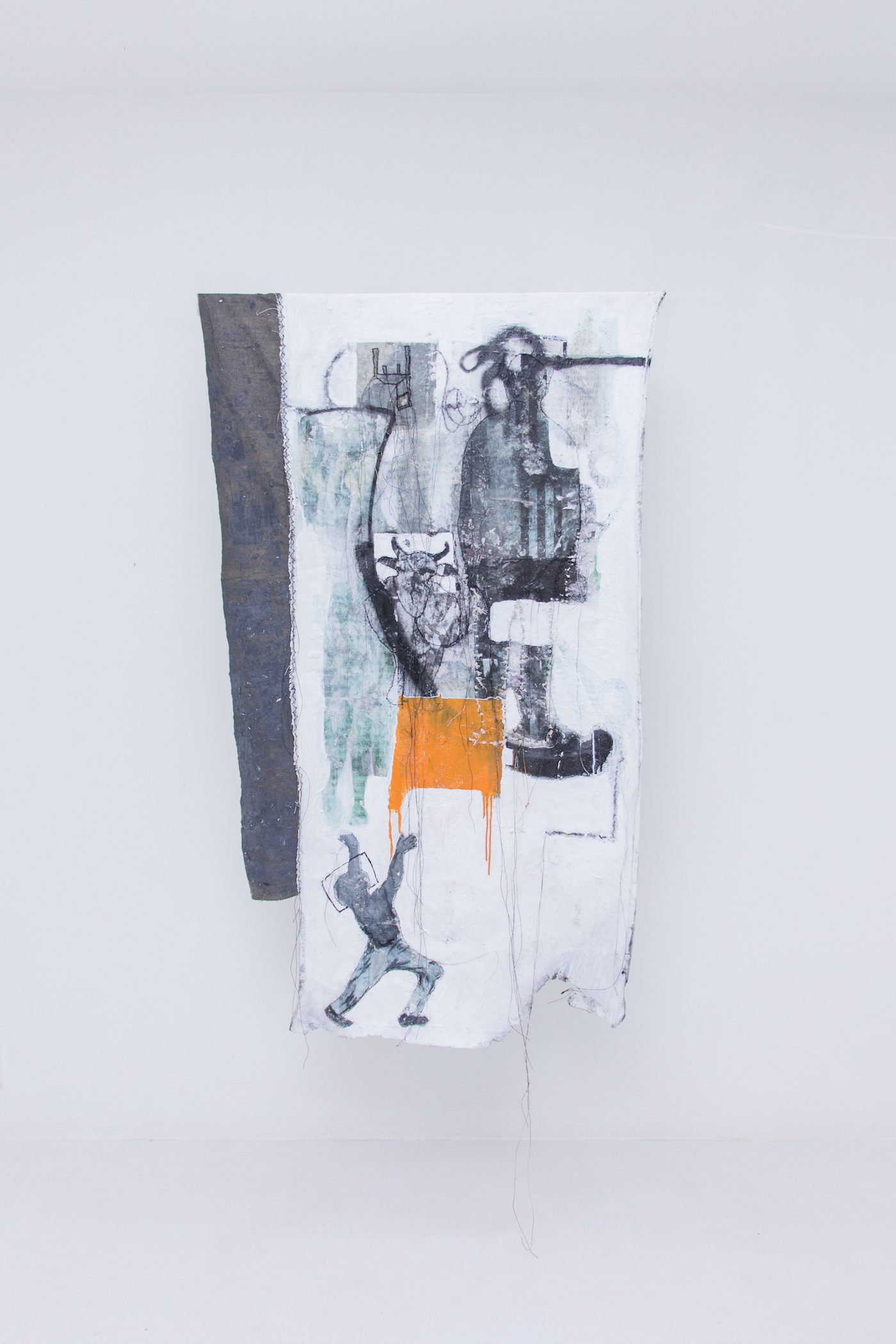 That said, watching Nyamai’s intervention I felt the tension between these two things: the desire to use the emotive and the embodied as a medium of extravasation and confrontation, and the socially constructed gaze of the Black body that reduces it to an object that houses only trauma. How to speak of the wound without reopening it? How to speak of the wound without leaving it to fester? This friction is near impossible to evade when entering the domain of performance art as a body read as Black. At one point Nyamai took what looked like ash and blackened their skin with it, the black smoke billowing around them reminiscent of the mythology of the phoenix rising from the ashes – though this phoenix was one that seemed doomed to remain in its ashen stasis. This reading left me heartbroken, yet strangely anticipant. Nyamai said that particular visual allegory was a representation of “not feeling Black enough” – a phrase that raised similar kinds of sentiments I had carried my whole life through not performing the requisite attributes that would qualify my Blackness. The qualifications for what constitutes “Black enough” fill me with too much sadness to even journey into.

All this to say that the legacies inherited from the colonial construction of race, the real precarity it has facilitated for those racialized as Black, and the multiple consciousnesses we as Black people have to interpellate in order to make sense of our lives are all richly explored in this offering from Nyamai. It contained a gathering and a colliding of histories, of discourses, of loss, of attempts to heal, of the personal and the political, and of that which is both and neither at the same time. All underscored by the motif of ash, the presence of which is either the before or the after – we cannot tell.

Kopano Maroga is a performance artist, writer and cultural worker, and co-director of the dance, movement and embodied politics publication and performance platform ANY BODY ZINE (anybodyzine.org.za). Their writing has appeared in Art Throb, Mail and Guardian and Gati Dance’s first journal Strategies for Resistance. They are a Masters candidate in Interdisciplinary studies in Public Spheres and Performance Studies at the Institute for Creative Arts, University of Cape Town. They very much believe in the power of love as weapon of mass construction.

This piece was initially published on February 6th, 2019 on artthrob.co.za.