Oil is a tricky good, especially when found in the waters of a community that depends on the cleanliness of its lakes – for fishing and livelihood. It’s these kinds of political topics that excite the artists of Malawi’s Ozhope Collective. Emmanuel Ngwira writes about their attempts to unmask shady business deals and a seemingly neo-colonial form of capitalism.

In “Ethics, Ecology, and the Future: Art and Design Face the Anthropocene,” Kayla Anderson discusses how “critical, conceptual and speculative” art can be useful in addressing humanity’s problems today.

She holds that “art initiatives that stimulate critical thinking rather than simulate action have the potential to be the most constructive.” Such work, she writes, emphasizes propositions rather than solutions and is thinkivist as opposed to activist, depicting movements of the mind instead of just calling to action. In her opinion, the thinkivist artist does not “indulge in easy solutions but engages radical imaginings: inviting us to re-envision our development … our political and social structures, and our relation to others in a broader ecology.” 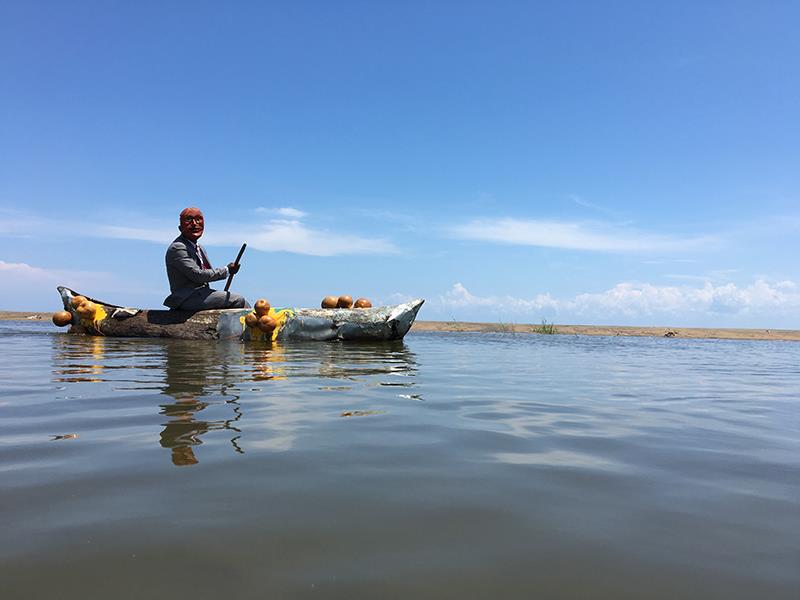 Recent conceptual art by a group of Malawian artists, the Ozhope Collective, passes for thinkivist art. In their performance and sculpture project, Row, they offer critical perspectives on the debate around oil exploration on Lake Malawi. The collective works with the fishing villages of Machemba in the Mangochi District and in Senga Bay, in the central region district Salima, to document the communities’ intricate relations with the lake and how the impending oil exploitation may affect their livelihoods.

Malawi’s oil plan has drawn mixed reactions. Internationally it has ignited a border wrangle between Malawi and Tanzania, the latter also wanting a share of the anticipated liquid bounty. Locally the Malawi government and environmental and civil society activists are at loggerheads. The government hopes that the project will ‘oil’ Malawi’s rusty economic wheel. For the activists, the project is a tragedy waiting to happen because it could destroy the country’s most famous tourist destination, a UNESCO world heritage site and the world’s first fresh water national park. The activists are also skeptical about the anticipated economic bloom following failure of similar projects like the Kayelekela uranium mine whose only visible ‘benefits’ presently are polluted rivers, yawning ditches, and piles of radioactive waste.¹ Like the uranium mining project, the oil plan too does not inspire confidence at all for it is already riddled with shady deals shrouded in secrecy. ² 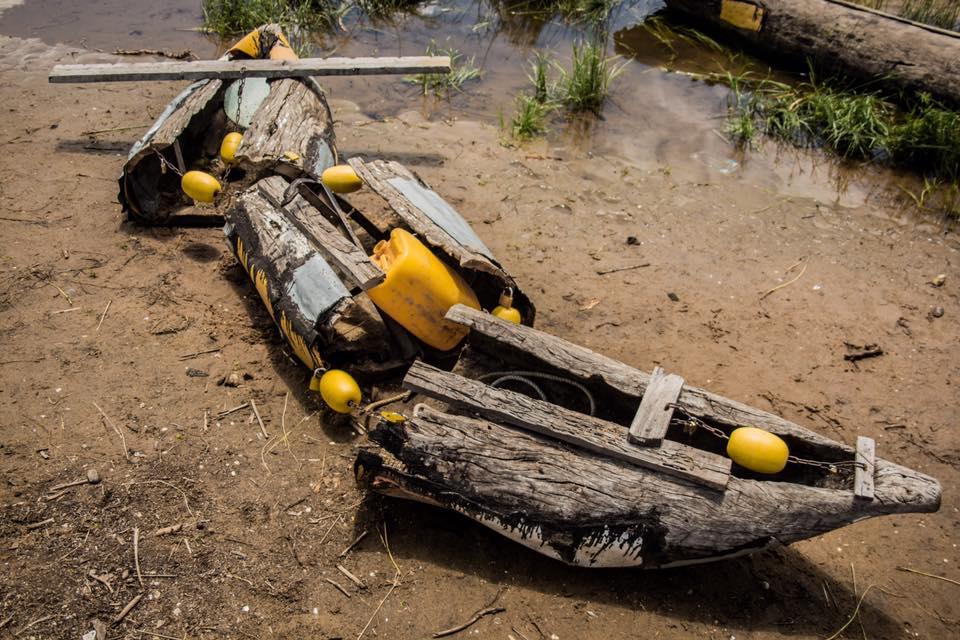 The collective engages these and other issues in Row, which is predominantly based on the dugout canoe, a rich cultural and socio-economic object in the lakeshore areas. As the dominant mode of transportation, the canoe symbolizes both mobility and livelihood – as the main ‘fishing vessel’ in most fishing villages. The collective appropriates the canoe both as prop and metaphor to interrogate socio-political and environmental implications of Malawi’s oil project. As metaphor, the canoe is an object where myriad (hi)stories, including those about oil, converge.

In the oil discourse at hand, the artist’s canoe bears an apocalyptic tale. After its sojourns on the lake, symbolized by ‘the sedimentation of paint, plastic and tar on its body’ (Ozhope 2017), it is beached and mutilated. If the paint, plastic, and tar are ‘traces of the narratives of its transformation’ (Ozhope 2017), then the canoe’s mutilation (fore)tells a tragic transformation: loss of livelihood. In an installation, the maimed canoe oozes a thick black liquid substance identified as tar, which is often used by local fishermen to seal leakages in canoes. But as deployed in the piece, tar transcends its traditional use as a sealant to suggest spillage, which could destroy aquatic life and the livelihoods of over to two million people that depend on the lake. An image of boys playing in the murky waters of the lake while wearing masks is suggestive of a polluted lake emitting foul air. 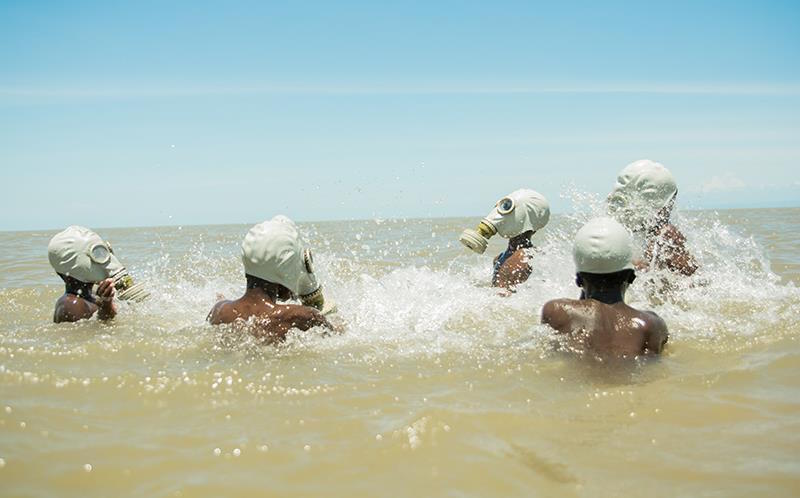 The collective also draws our attention to capitalist inertia driving the oil agenda in Malawi. This inertia comprises Western multinational companies and their local accomplices.³ The influence of the multinationals is captured in the Nyau 4 mask dancer Simoni imitating Western dress and mannerisms. In one installation, Simoni paddles a canoe on the lake, evoking Western influence in a manner that is suggestive of the “second coming” of colonial domination. The red mask mimics the white man’s face and is also symbolic of the secrecy with which the oil issue is handled. Local accomplices are represented by a gentleman wearing a grey suit and standing waist-deep in the lake while holding a paddle. These are local officials who care more about personal gain than adverse effects of the project on ordinary citizens. Greedy capitalist intentions are obscured by suits and masks.

As thinkivist artists, the Ozhope Collective invites us not only to participate in the production processes of Row, as conceptual art would require, but also to interrogate various discourses it grapples with, including politics and polytricks behind the oil venture.