On the occasion of International Women's Day we look in our latest series – Female Pioneers – at female artists from Africa who have made great contributions to art on the continent. First up is Ugandan artist Theresa Musoke, who devoted her life to making art and experimented with various forms of expression, writes Martha Kazungu.

Among the Baganda who inhabit the Western shores of Lake Victoria, a popular saying goes: eliso lyomukulu, awaddugala wewalaba – in an elder’s eye, it is the dirty spots that see. It highlights the intensity of wisdom that one gains with the wealth of experience and passage of time. Theresa Musoke embodies this saying. She is one of the most outstanding and experienced female artists in Uganda today, despite a craggy career path.

For many female artists, it is easy to be derailed from the track of being “the” artist to simply “an” artist. This derailment often comes due not only to the obvious factor of the aggressive weight of gender responsibilities based on social constructs which confine female artists, but also due to institutional sidelining and misrepresentation of them. Musoke resisted these factors. She has continuously and progressively, against the odds, devoted her life to making art and experimented with various forms of expression. 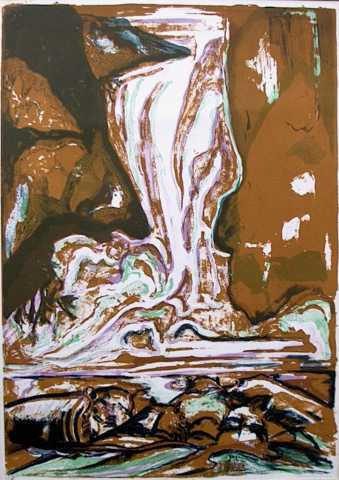 From her school days in the early 1960s at the Margaret Trowell School of Industrial and Fine Art, Musoke’s artworks gained phenomenal attention. She received a prestigious commission to create the Birth mural that still exists at Mary Stuart Hall, one of the women’s halls of residence at Makerere University. Moreover, a selection of her prints, sculptures, and paintings was retained by the university and are part of the collection at the Institute of Heritage, Conservation, and Restoration – commonly referred to as the Makerere Art Gallery. Musoke’s other artworks are currently scattered across the globe in both private and institutional collections, such as that of the Iwalewahaus.

Musoke works with batik, barkcloth, acrylic, and dye, among other materials. Although she is mostly known for painting and printmaking, every now and then Musoke engages in sculpture, depending on her artistic energy. She follows her instinct and a need to portray thoughts she cannot express in words. “The whole thought of painting is a strange one,” she told me, “most people want you to put it down in words, but the truth is if I could tell it, then I wouldn’t paint it. Therefore to start explaining my paintings becomes ridiculous! It’s about nature and the many parts of it. I normally don’t tell a story as such. It is a very difficult thing to put your feelings into words. In my art I precisely have the joy of doing just a beautiful thing.” 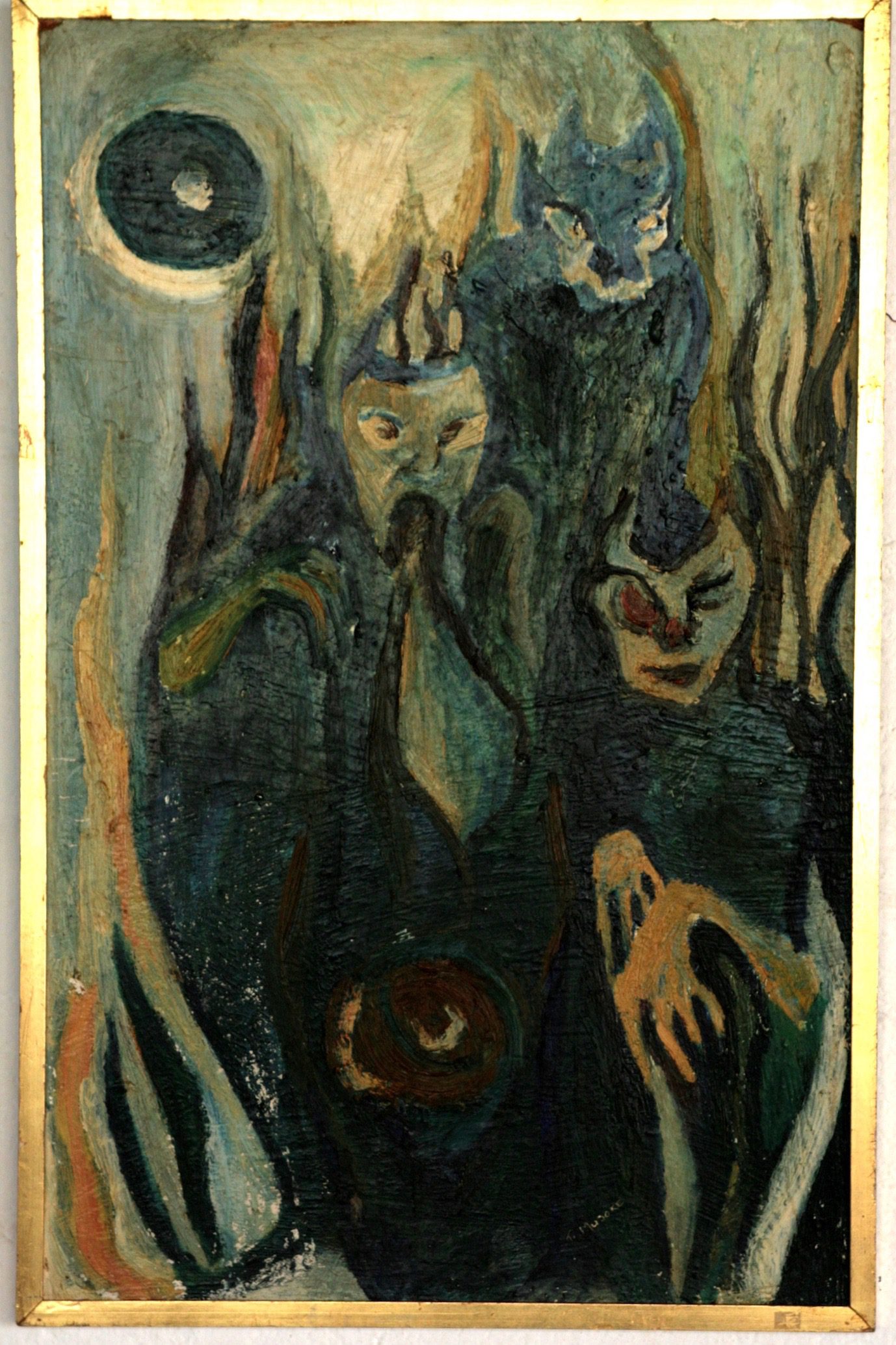 Musoke permits herself the space and experience to traverse painting, not necessarily to tell particular stories but to illustrate or exhibit her intangible thoughts. For her, it is evident that nature and wildlife occupy the biggest part of her artistic interests. But her paintings often do not depict animals in their distinctive completeness; instead she opts to erase or give new layers to her subjects. Musoke’s Cat Ghosts, an oil-on-board painting from the 1960s that is in the Makerere Art Gallery collection, played a vital role in grounding her interest in wildlife and “all the many parts of it.” Three ghostly creatures take a central position in the painting and are engulfed by what appears to be flames; a dark moon occupies the upper left corner. The creatures’ facial compositions vary. While one evokes a beastly ferocity, the other two are reminiscent of exaggerated, distorted human faces. Musoke’s combination of dark colors renders the entire painting poignant, like a sort of premonition. This particular painting could be a subtle commentary on events in the 1960s, as those early years of independent Uganda brought to the surface a plethora of social and economic uncertainties.

Musoke spent over two decades, from 1974 to 1996, in Nairobi, Kenya. She had fled Uganda because of the political situation in the 1970s and the civil war that followed in the early 1980s. In the 1970s, Uganda had a dictatorial regime under President Idi Amin. He had interest in art, but was uncompromising in his expectations from artists. Any form of subversion or variation from his dramatic demands could cause unnecessary harm. Musoke took refuge in Nairobi like many other artists of her time, where she continued to teach as well as make work about wildlife and the Maasai. For her, Nairobi was and still is a place where she continues to flourish. 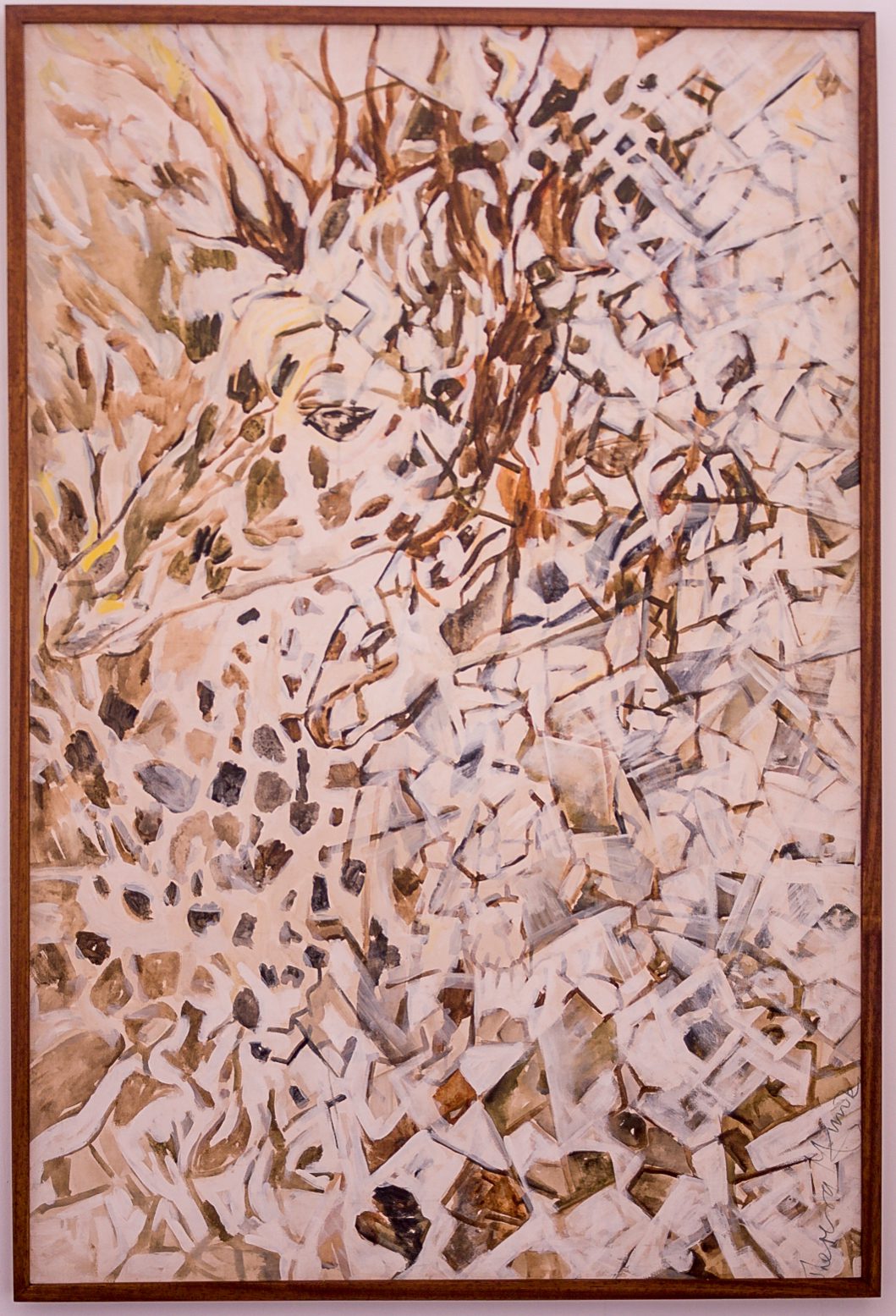 Theresa Musoke. Oil on board. Courtesy the artist.

Musoke’s work has been exhibited in many exhibitions over the years. In 1984, for example, she participated in the major historical exhibition Sanaa: Contemporary Art from East Africa, curated by Fatmah Abdellah, Mordecai Buluma, and Elimo Njau, at the Commonwealth Institute in London. In 2018, she exhibited in Pioneer Women of the Arts at Nairobi Gallery. The nine other artists included Rosemary Karagu, who was the first female student at the Makerere Art School (from 1950 to 1952), and Magdalene Odundo. The most recent show in which Musoke participated in Uganda was A Love That Dares, curated by Margaret Nagawa during the inaugural exhibition at Afriarts’s new space in Kampala’s industrial area. The exhibition featured Musoke’s prints and paintings depicting wildlife alongside the works of a senior generation of artists such as Joseph Ntensibe and Sanaa Gateja, as well as filmmakers Mira Nair and Zulaika Kingdon.

Because of her long sojourn in Kenya, Musoke is more popular there than at home. But she has lived in Kampala since 1997, and holds a special place in the history and progress of modern and contemporary art in Uganda. For example, Musoke was one of the first female artists to obtain a degree at Margaret Trowell School of Industrial and Fine Art. At seventy-five, with more than a half a century of practice, Musoke has mastered her skills and techniques. She has come to adopt approaches and processes that make her artworks necessary, even indispensable, for their crucial ability to retain and communicate a local flavor. And for Musoke, every work must speak for itself, because misappropriating, mediating, and parading themes can adversely limit artistic vision.

Martha Kazungu is a curator and writer from Uganda. She is currently pursuing a master of arts in African Verbal and Visual Arts at Bayreuth University, Germany.