Despite having had limited cultural exchange, the continent of Africa and the region of Oceania are connected via similar histories of colonialism. Several Aboriginal, Black, and Pacific Islands artists have been exploring those similarities in order to revive history, keep indigenous cultures alive, and imagine their own futures. The series Over the Radar is dedicated to them. For this article C& author Jessica Hemmings interviewed Indonesian artist Vincent Rumahloine.

Vincent Rumahloine’s community-based work has taken him on residencies to Prague, Stockholm, and Addis Ababa, often incorporating the development of locally relevant archives. For his series Moving Museum (2015–ongoing) he collects local stories and presents them in locally built structures. The Exchange (2018) combines photography and coffee to start dialogues amongst strangers in Addis Ababa. And his most recent work, Façade: Banda Niera (2019), questions local access to Indonesian history in the Maluku Islands, once famously known as the “Spice Islands.” 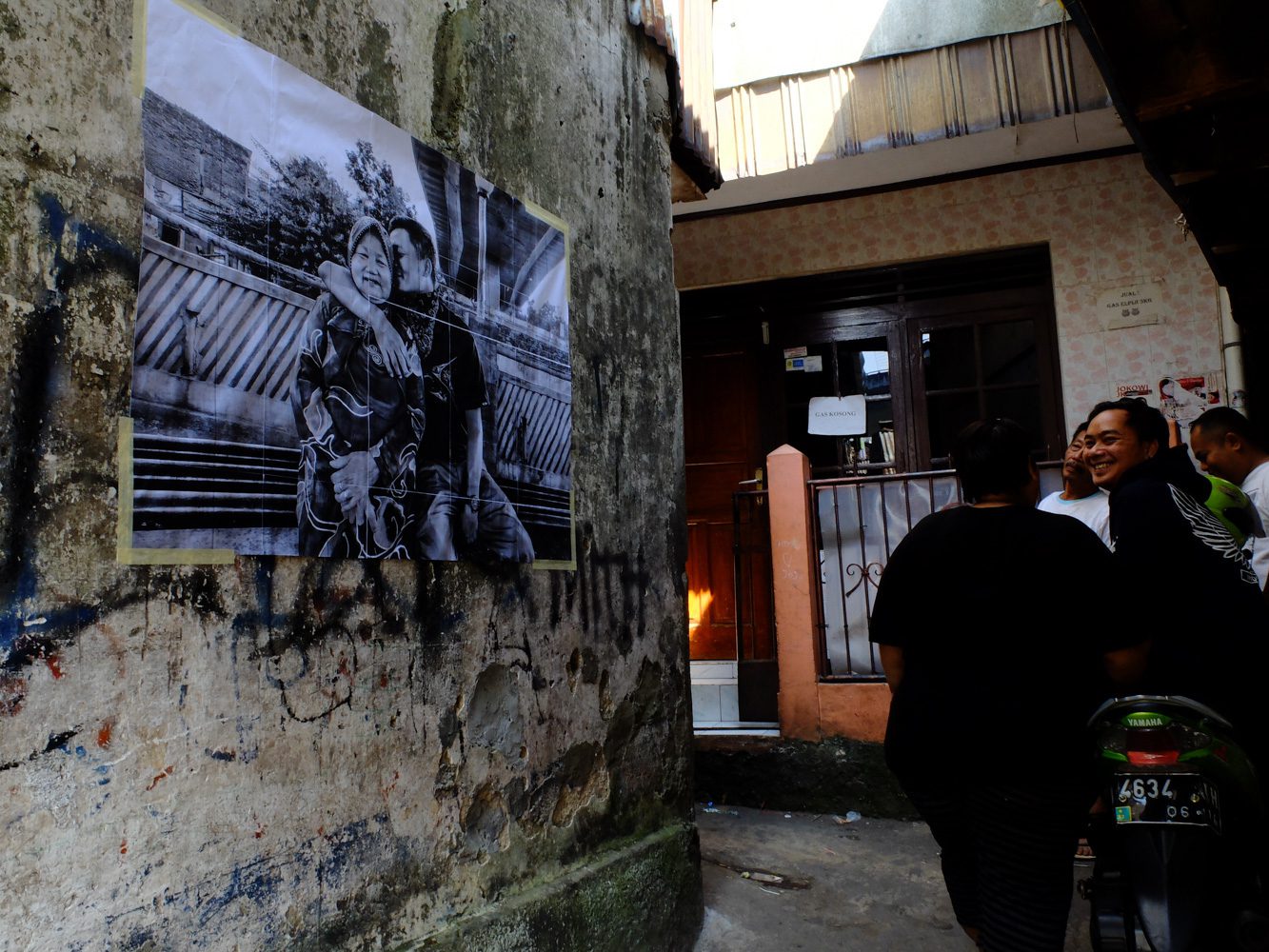 C&: You studied ceramics at the Bandung Institute of Technology in Indonesia. How do ceramics inform your social practice today?

Vincent Rumahloine: For my series Family Portraits (2015) I visited around eighty houses and spoke with the inhabitants every day for three months. I had learned persistence and repetition through my experience with ceramics. After I graduated in 2009, I knew that working with ceramics would not be possible because of the cost. Instead I taught art in an international high school and volunteered at a local HIV/AIDS organisation. So I started becoming more interested in people.

VR: Trust is not about making big things. And it is a currency I can bring everywhere. A project in Stockholm, for example, was very much built on trust. The focus in that work – Inhabitant Zero: Immigrant Project (2018) – was on the immigrant community in the city, and I invited everyone into my accommodation. Working on The Exchange in Addis Ababa, people also warned me about safety, but if someone is bothered by my camera, I just put it away so we can talk. Trust is my currency. 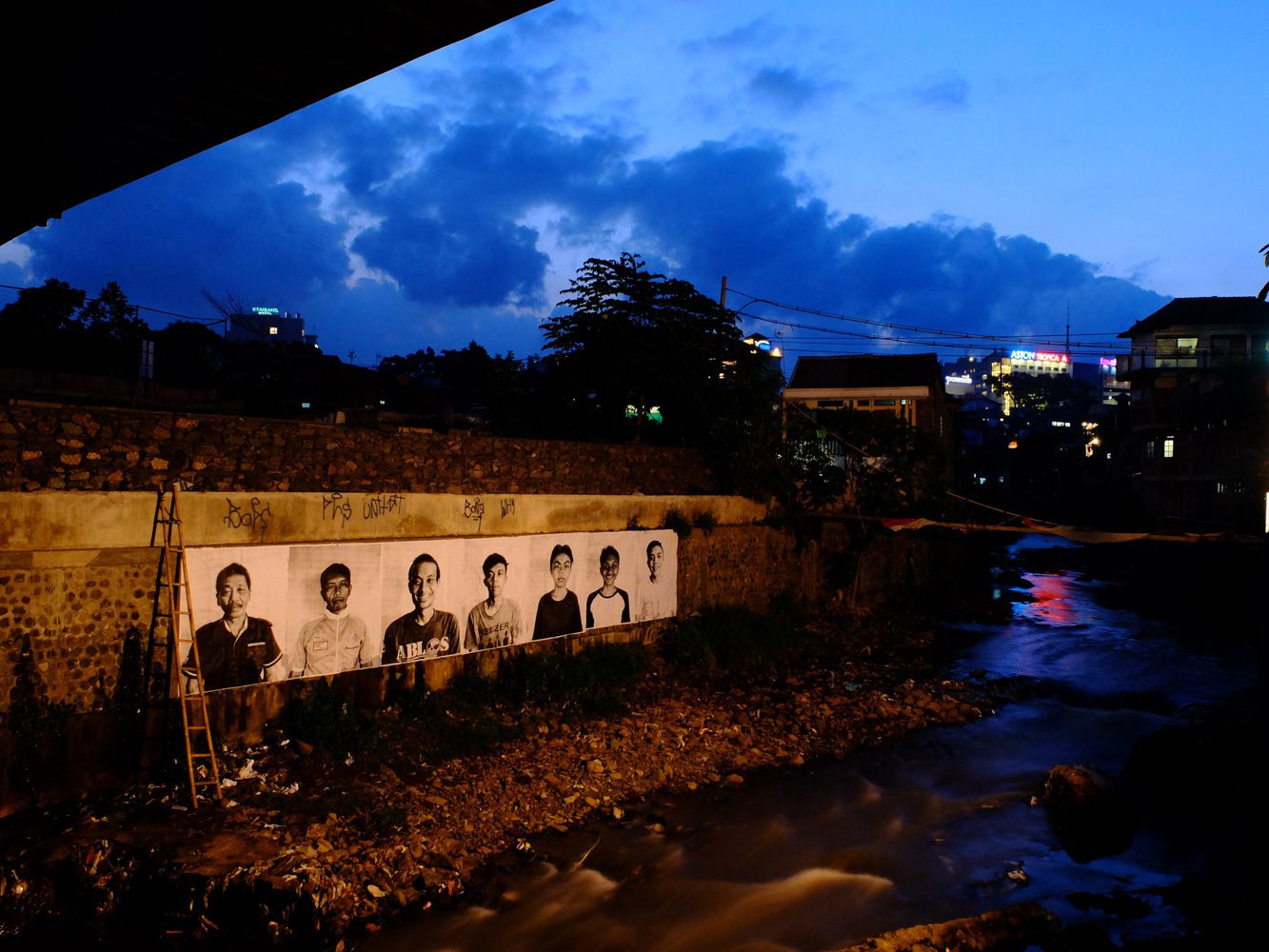 C&: In her 2012 book Artificial Hells, art historian Claire Bishop writes that community projects can be difficult to capture in photographs because they unfold over time. You take photographs of photographs.

VR: Some people never think they are important enough to be in a printed photograph. I always print the photos because people need to know what you use the photo for. Often I print on really cheap paper – it is not a sophisticated medium – and I bring many large photographs back to the community. Printing the object for exhibitions in the community is really important.

C&: For The Exchange project, as part of your residency with the South-South Media Lab, you used a digital Polaroid camera.

VR: In the 1980s and 1990s Ethiopia became a focus for many journalists to take pictures of hunger. I felt many Indonesians had an out-of-date idea of the country based on that information from decades ago. When I arrived in Addis Ababa I felt a fear toward photography. People think photographers want to use them, take their image and make money. But photography is also about the magic of being able to capture a moment – something I felt the first time I was introduced to the medium. I took instant Polaroid portraits and asked the people to wait and see the magic in the picture. I could print them immediately: one for me and one for them.

C&: Coffee also played a role in the project?

VR: Coffee ceremonies in Ethiopia are about sharing and listening. In Indonesia the term ngopi originally meant to drink coffee together, but now it also means sitting together to chat – sometimes coffee is no longer involved. Gathering to talk remains important though. The Swedish use the expression fika time to sit and talk in a similar way. Addis Ababa is one of the fastest growing African cities and I wondered if the coffee ceremony was still important. Through sharing a coffee and the exchange of photos I was able to gain trust and hear about the Ethiopia of today – not about the one based on stereotypes. 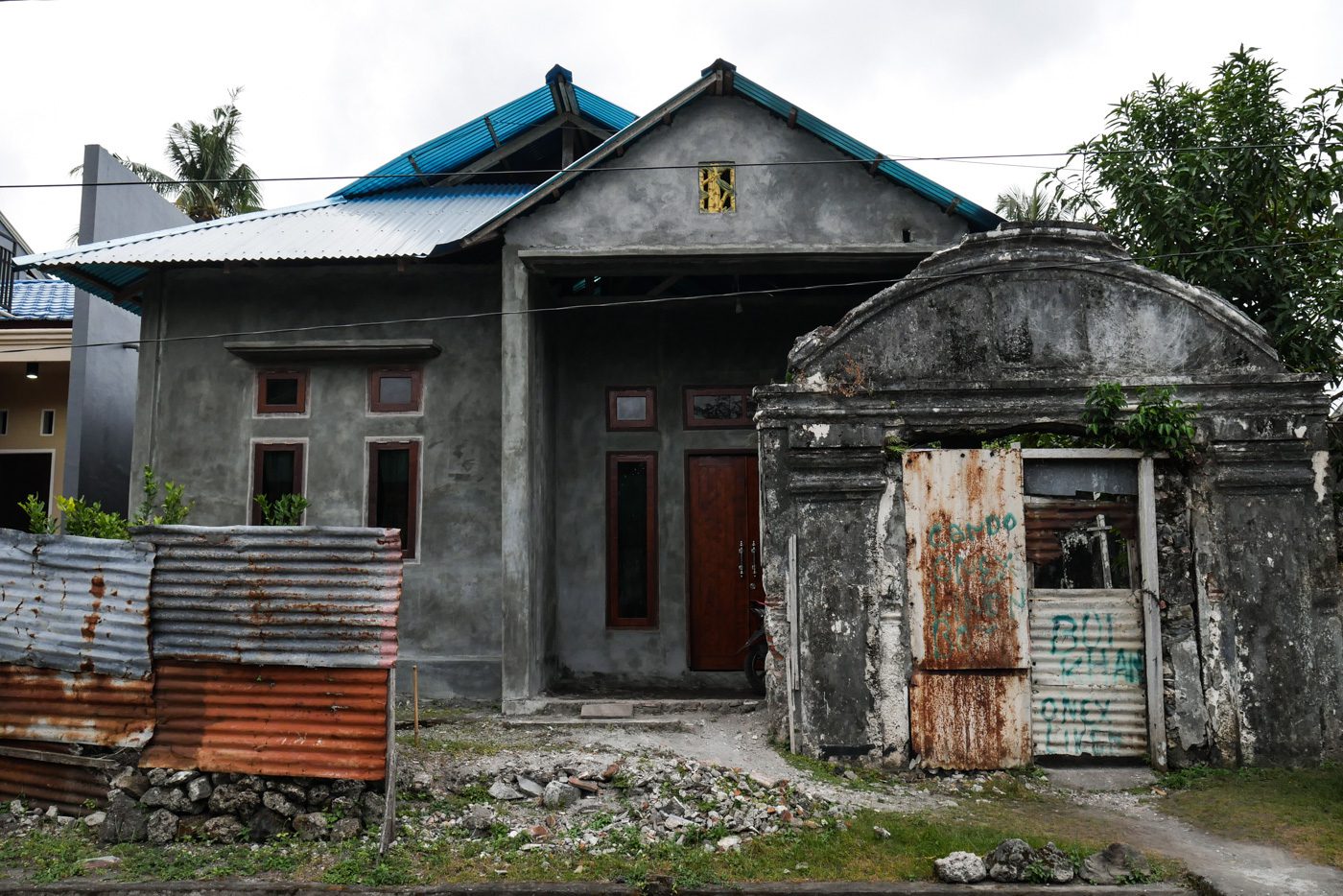 C&: Your recent work Façade: Banda Niera (2019) series is about people who have disappeared. What inspired it?

VR: In the sixteenth century nutmeg was more expensive than gold. The fate of the Banda Islands in Maluku was decided in the Netherlands; the indigenous population was killed and labor brought in from other areas. Buildings on the main island of Niera in the archipelago were built by the Dutch. After I arrived my original Family Portraits proposal did not feel right, so I organized an exhibition that would use local materials instead.

The local arts organization asked me how we could learn more about the islands’ history. The local people want to know why certain buildings are here – but we would need to go to the Netherlands to learn. On the internet I found a map from 1944, one year before Indonesian independence. We located the house of the Govenor-General Jan Pieterszoon Coen, the hospital, and a hotel – the Façade photos were a product of this research. The locals live in the midst of this unknown history.

My family background from this area is one of displacement. The feeling of being detached from history, or being forced to accept something without having an option, has an impact for a very long time. 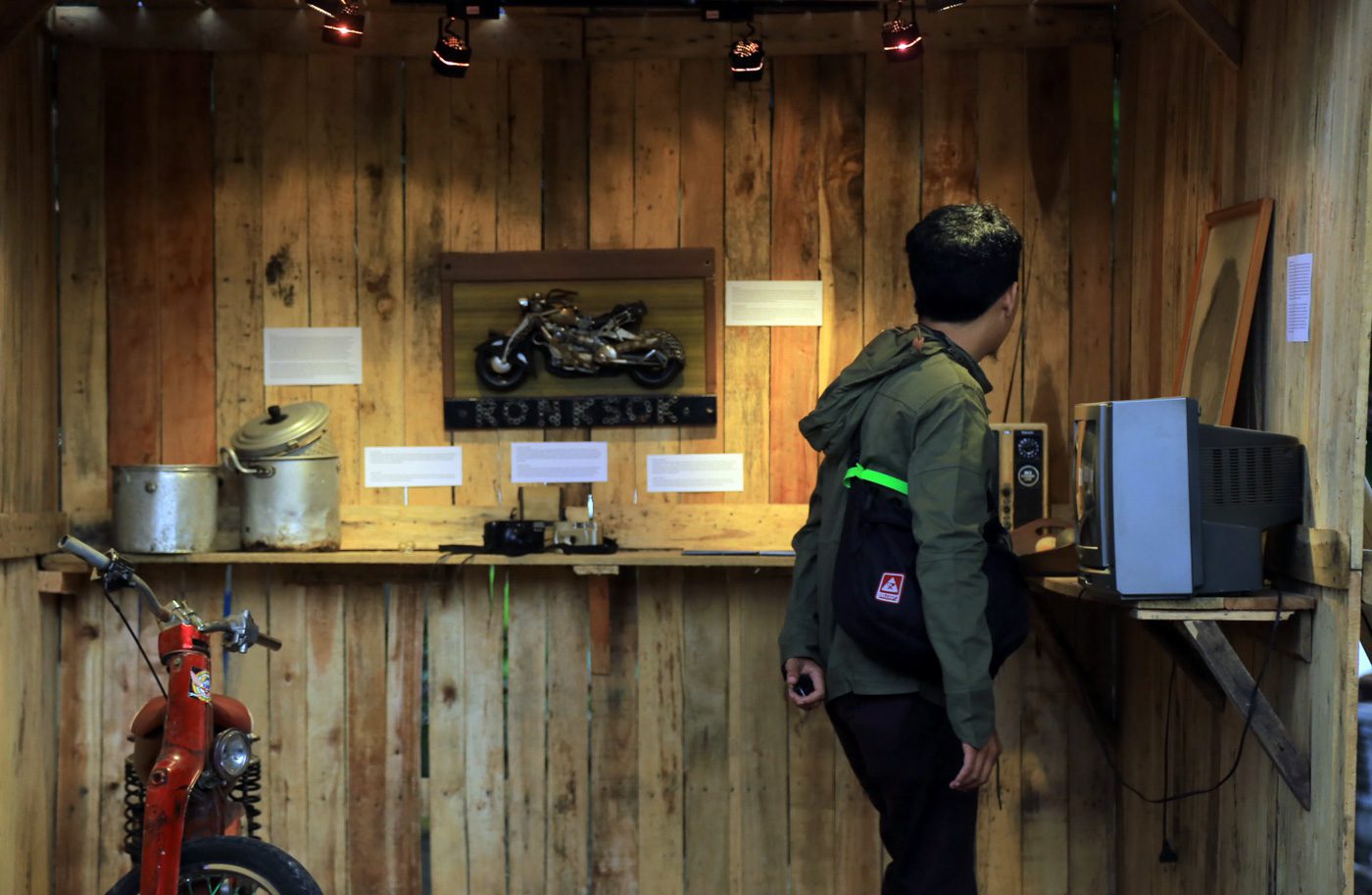 C&: Finally, what have you been working on during the COVID-19 lockdown?

VR: I have been collecting memories of life before the virus, like in the Moving Museum. It has become a digital archive of visual material and podcasts. Using video conferencing is a really awkward moment for me. But there is also curiosity. Everyone has the same problem, so no one has an advantage at this point. And yet for my friends in the eastern part of Indonesia this is a new experience. I want to learn together with them; they feel awkward, but I also feel awkward. The good thing is: everyone is learning at the same time.

Jessica Hemmings writes about textiles. She studied Textile Design at the Rhode Island School of Design, Comparative Literature (Africa/Asia) at the University of London’s School of Oriental and African Studies, and wrote her PhD at the University of Edinburgh on Zimbabwean author Yvonne Vera. She is currently Professor of Craft & Vice-Prefekt of Research at HDK-Valand, University of Gothenburg, Sweden.

Tony Albert: “My work looks at optimism in the face of adversity”