Why Decolonising the Arts Must Be an Intersectional Effort

In an event held in Salzburg, Austria, art practitioners from across the world gathered to discuss how transcultural exchange can happen today and how to break free from binary positions. Our author Olamiju Fajemisin looks into the productive ideas presented at the Global Academy II and how the notion of “global” was put to the test.

The Global Academy II is a two-day symposium in Salzburg, Austria, that marks the end of the Salzburg International Summer Academy of Fine Art. Founded in 1953 by Oskar Kokoschka, the institution initially invited participants from Europe and North America. Sixty years on and curated by director Hildegund Amanshauser and Kimberly Bradley, it featured 80 courses with participants from 50 countries.

Accordingly, the program of 2018’s symposium aimed to both teach and learn within the global art field, as decolonization strategies were exchanged in an exploration of how art can become an emancipatory, decolonial practice. The weekend (11-12 August) of quick-fire oratory exchange investigated what lies beyond the North/South, East/West binary, new means of significant transcultural exchange, and how this can sometimes incur power politics and “gatekeepers”.

“Globalization talks about the world as if it had no past and no future,” he said, “whereas ‘planetary’ includes the birth, childhood, adolescence and the future senescence of the planet. The planet becomes something that moves, not just in space, but actually in time.” Sengupta’s conception of the planetary was assembled using different objects and reference points in history. This neutral, philosophical model sought impartiality, which was mostly reflected in the subsequent talks, however, some of them were still delivered with a Western gaze rather than escaping the binary and utilizing a planetary gaze.

The rethinking of the North/South, East/West binary was the theme that permeated the weekend, defined in its simplest form during the presentations of Alexander Koch and Rachel Bride Ashton. Koch discussed New Patrons, an initiative that reconsiders the commissioning process, allowing anyone to become a patron. The idea being that commissioned artists must work alongside a mediator and the patrons to solve issues affecting a community. The 2014 project, Liberté Pygmeé, is a fine example of transcultural exchange in the all-encompassing, planetary sense. In this project, Tte Baka people of southern Cameroon were able to create spaces that allow ownership, preservation of tradition and economic independence.

The influence of narrative autonomy was expressed by many of the conference’s 25 participants. Diana Campbell Betancourt reiterated the importance of expanding what we include in our “global gaze” when referring to the 1952 Bangladeshi language protests in Pakistan; her role in the conception of the Dhaka Art Summit as a non-commercial research platform and implementer of means through which people can “write and facilitate their own art histories”; and to the seldom discussed colonization of Guam. Likewise, anthropologist and filmmaker Debbie Onuoha presented Lagos, Lagos, a film exploring the “oceanic history” eternally binding Lagos, Nigeria with Lagos, Portugal, from her perspective as a Ghanaian-Nigerian woman with ties to both cities. 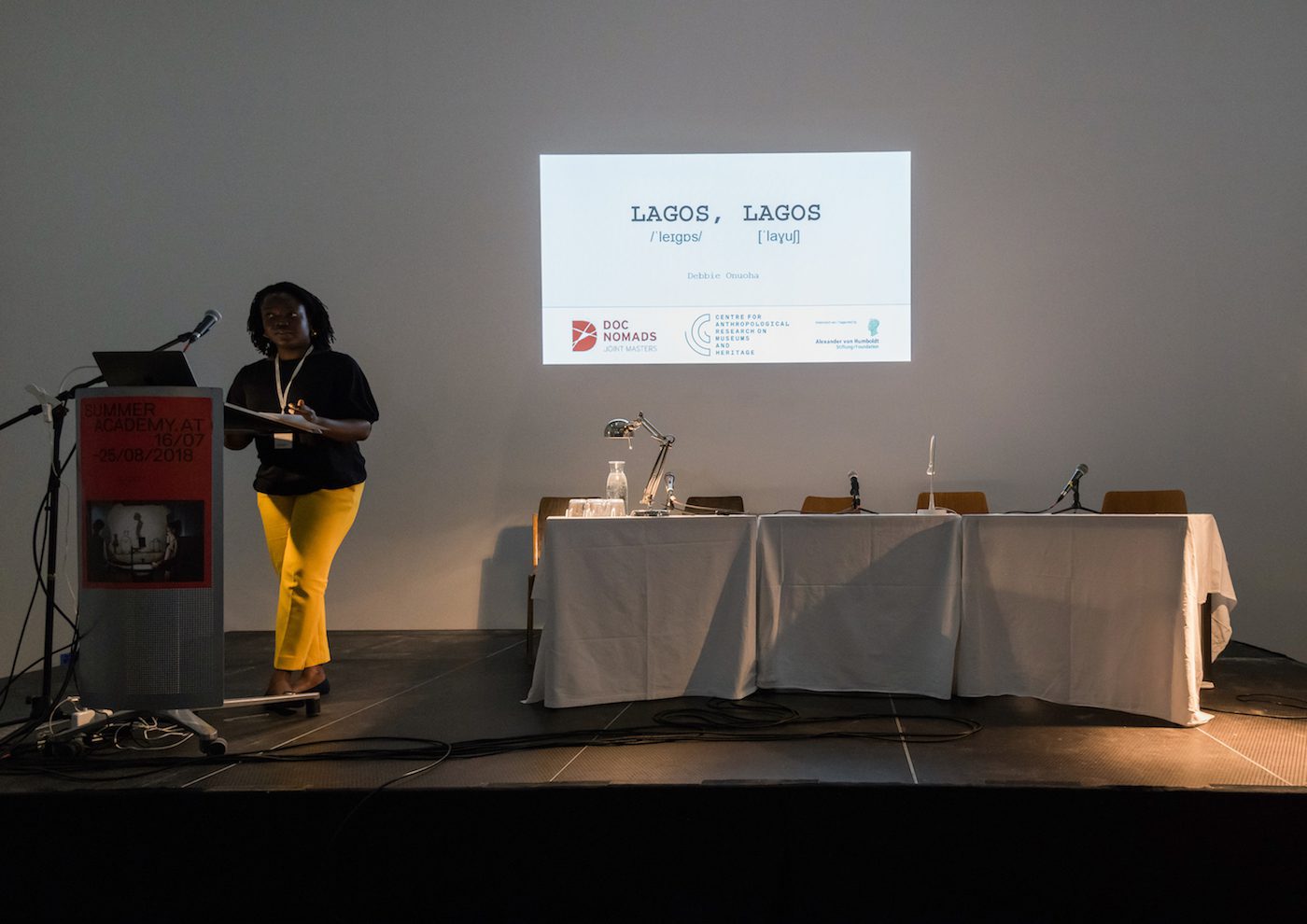 Decolonization of large institutions and restitution were lauded as the first steps to be taken to see meaningful results in the decolonization of the art world. “Europe looked in the mirror and saw the world, beyond that lay nothing”. Using the words of Uruguayan writer Eduardo Galeano from his short story “Euroeverything” (2009) to demonstrate the European blindness to its colonial history, Charles Esche, director of the Van Abbemuseum, affirmed the responsibility art institutions have to acknowledge the history of the very buildings in which they ’are housed. Detailing his own efforts to recognize and consolidate the role of the tobacco plantations and the Dutch East India Company in the former factory’s construction, he insisted: “Museums aren’t only exhibitions, they are their buildings, and such institutions need to recognize the backs of colonial labor upon which they’re built”.

Speaking with similar interests in mind, curator and former director of Frankfurt’s Ethnographic Museum, Clémentine Deliss delivered a “manifesto,” demanding that the collections of colonial artifacts incarcerated in Europe must at the very least be made available for public consumption until significant restitution becomes a reality. Though these strategies were presented by those speaking on behalf of the institutions, they sought to appeal to people on a personal, emotional level with the next imaginable step being how this movement can escape the Western sphere and become a method of global decolonization.

Media theorist Paul Feigelfeld began his fifteen-minute presentation by stating that he would, under no circumstances discuss art, and by disregarding the use of the term “post-colonial”. A suggested consensus among attendees was that to suggest that we are living in a period of “post-colonialism” ignores many of the lasting effects of global imperialism. However, it was also Feigelfeld’s “Refugee Phrasebook” that aroused controversy. Many questioned the integrity of the project’s title and pointed out that many refugees already speak several languages due to today’s technology.

The work of Renzo Martens could be commented on similarly. The Dutch artist presented the OMA designed White Cube in Lusanga, DR Congo, to help the plantation workers legitimize their art and access the international art world, yet murky sentiments and a passive architecture studio make for a work that is a near neo-colonial act considering the histories of the institutions that would have funded such an expedition.

“Where do we go from here?” was the title of the weekend’s closing panel which featured Tony Chakar, Marina Fokidis, Emeka Okereke, and Sabine B. Vogel. And it was here where a more informal and honest exchange of opinions between panel and floor gave leads as to how we can move towards a more efficient decolonization of art. The generational range permitted for multiple issues to be addressed, notably asking ourselves what “global” truly means when we expand our world-view into an unbiased ideal.

Using the example of the correlation between the success of Berkeley-educated Iranian artist Shirin Neshat and the fact she is based in New York City, Canadian scholar Andrew Gayed reminded the floor that we cannot lose momentum in this movement as we need to recognize the privilege of those who have access to certain materials, institutions, and opportunities that many others do not. “We need to question the idea of progress, how far we’ve come,” he said. “And whether or not that’s enough.”

Gayed’s intervention was misinterpreted by some as a matter of geographical logistics. Others in the floor added to the paradigm of privilege. “We shouldn’t forget that the ‘diversity’ we’ve seen in the art world still operates under the exploitative systems of capitalism and neo-liberalism,” reminded Contemporary And’s Will Furtado whose presentation focused on the historical blind spots C& addresses. And Brazilian curator Cristina Tejo confessed to an astounded audience that she recognized her white privilege on a daily basis and asked whether others did the same.

By exposing the matter of privilege we are given another tool with which we can further pursue the sentiments of speaker Shuddhabrata Sengupta: moving on from a subjective, global perspective and adopting a planetary way of thinking. Decolonizing the arts can seem a never-ending and slow process that can fall into simple consensus. Yet the Summer Academy II has proved that before agreeing on any solutions we must ensure that less popular options are also heard and considered.

"The spectacle of Black trauma"

Why Double Standards in Representation Need to End in the Arts