Our author Bukola Oye caught up with photographer and Video Artist Aderemi Adegbite during the Biennale Jogja, 2015.

Bukola Oye: What is the Vernacular Art Laboratory about?

Aderemi Adegbite: Vernacular Art Laboratory (VAL, Lagos) is a nonprofit artist initiative I founded in 2015 in Lagos. It is a space that artists co-habit to exchange ideas and co-create works with uncommon flair. As a noncommercial art space, collaboration between contemporary visual artists and literary and scientific artists is our main focus as a platform for inter-disciplinary art projects. The space is interested in experimental workshops and collaboration with artists from different artistic genres: dancers, writers, musicians, dramatists, photographers, cinematographers, fine artists, street artists, digital artists, installation artists, video artists, architects, and scientists. All of us involved want to promote interaction amongst different art forms, take art into public spaces, and also serve as a center for communal living for contemporary artists from across Africa and beyond. We will launch formally in February 2016.

BO: As a photographer and video artist, what has been your artistic focus?

AA: I will not say that I started with a focus, but I have always found myself documenting civil-rights activities. For example, the fuel-subsidy protest in Lagos and the Makoko demolition protest. Even in Berlin, I was fortunate to witness and document protests there by the Turkish community and refugees in 2013. Now, I am much more interested in personal stories and family histories as self-catharsis. 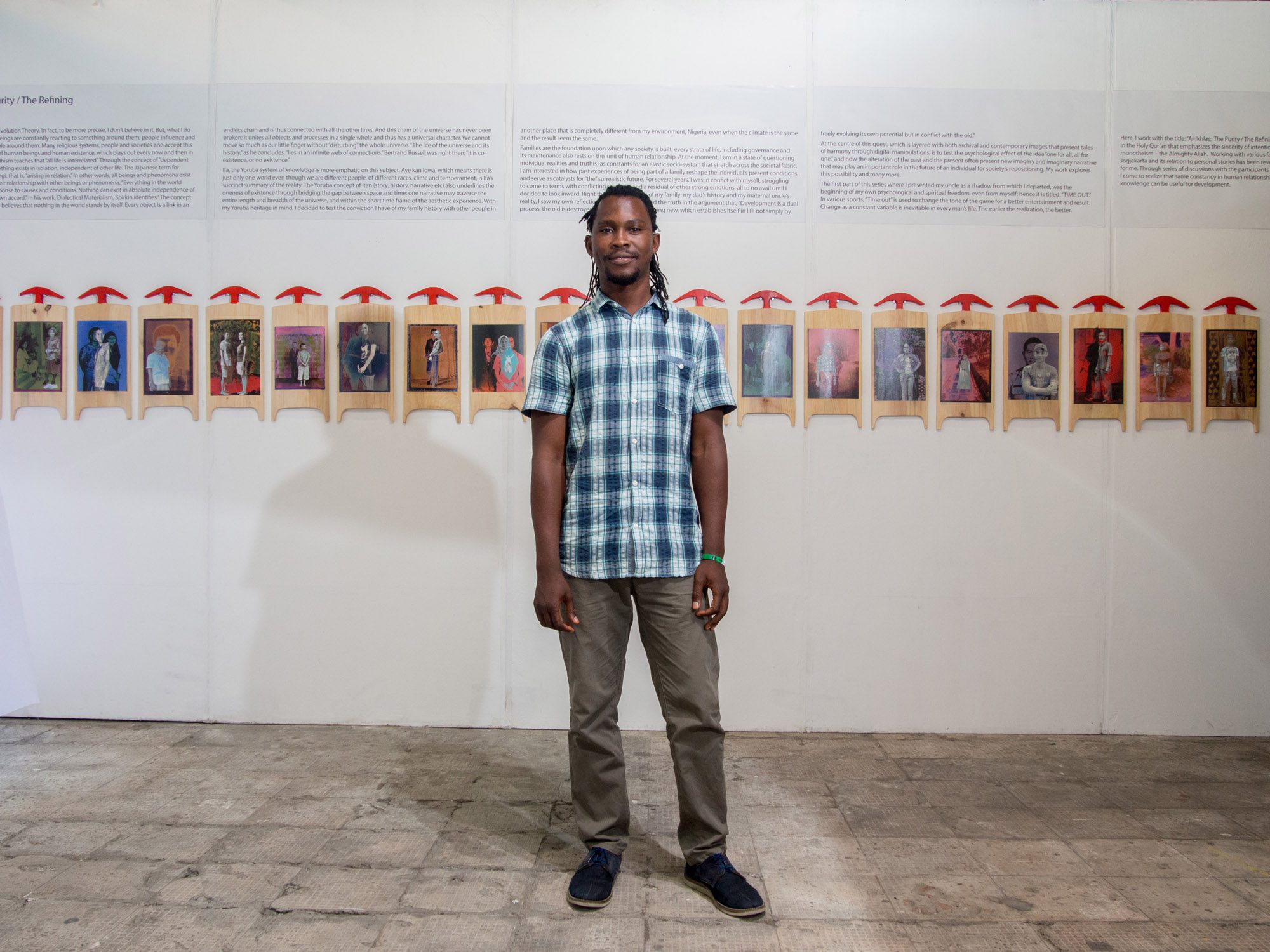 BO: In your debut solo exhibition titled N65, you presented different faces and phases connected to the Occupy Nigeria protest in 2012. Looking back, how would you describe that conflict between the government and its people?

AA: I like to be the voice of marginalized people because I am a product of the marginalized class in my country. I like to be the voice of the people too. My first solo exhibition, about the fuel subsidy removal, was shown in Nigeria at the Goethe Institut, where the director Marc-André Schmachtel called me “an angry young artist.” The exhibition was also presented in Senegal at the Goethe Institut of Dakar. My second solo exhibition, Power-Lines, was about the demolition and dehumanization of the people living along the Makoko/Iwaya waterfront in Lagos. Going by what is obtainable elsewhere, the people’s voice or wish is the command of the government or perhaps a middle ground. But the Nigerian government has proven over the years that the people’s interest or wish is not the same as theirs. I think the country came to this point after the military raped our national integrity. It does not matter which form of governance we practice. The military had no respect for the people’s demands. The politicians are not interested in the people’s welfare but prefer to pursue their selfish agendas aided by unreasonable policies in democratic dispensation.

BO: What was your most shocking or definitive experience that best describes what was happening in Nigeria then?

AA: The most definitive for me was the resurrection of Fela Anikulapo Kuti. His songs became the anthems of the protest. Once again, he was able to realign with the masses over his ideas about revolution. People believed in his messages on the deceit of the Nigerian government. “No Agreement Today, No Agreement Tomorrow” once again gained popularity on the lips of the masses. Indeed, the government actually pushed the masses to the limit and the reaction this time was unexpected. The most shocking event was the day the military troops stopped our peaceful protest march at Onipanu on our way to Gani Fawehinmi Park at Ojota. Despite the explanation that it is our human right to have a peaceful protest, the military dismissed us by shooting tear gas into the crowd. This happened under the rule of a democratic government.

BO: You mentioned your second exhibition Power-Lines. Can you talk a bit more about it? Did this protest exhibition move the government to act differently?

AA: Power-Lines is a series that I created to supplement my argument about the importance of respect for humanity and of honoring human rights. During the demolition in 2012, the Lagos State government went against the rights of the people living on the waterfront. There was no prior research into the community: its economic benefit to the state, its social relevance, and international solidarity. It happened that during the demolition exercise by the State Marine force, one of the chiefs – Chief Timothy Hunpoyanwha – was shot dead. This somehow got the state government to loosen up a bit on the demolition plan till the former governor left office. I was the only Nigerian photojournalist who was allowed to travel with community leaders to the Republic of Benin, where the chief was buried. I created Power-Lines to show the other side that the government is not paying attention to, which is very important to the future of the community: the youth. 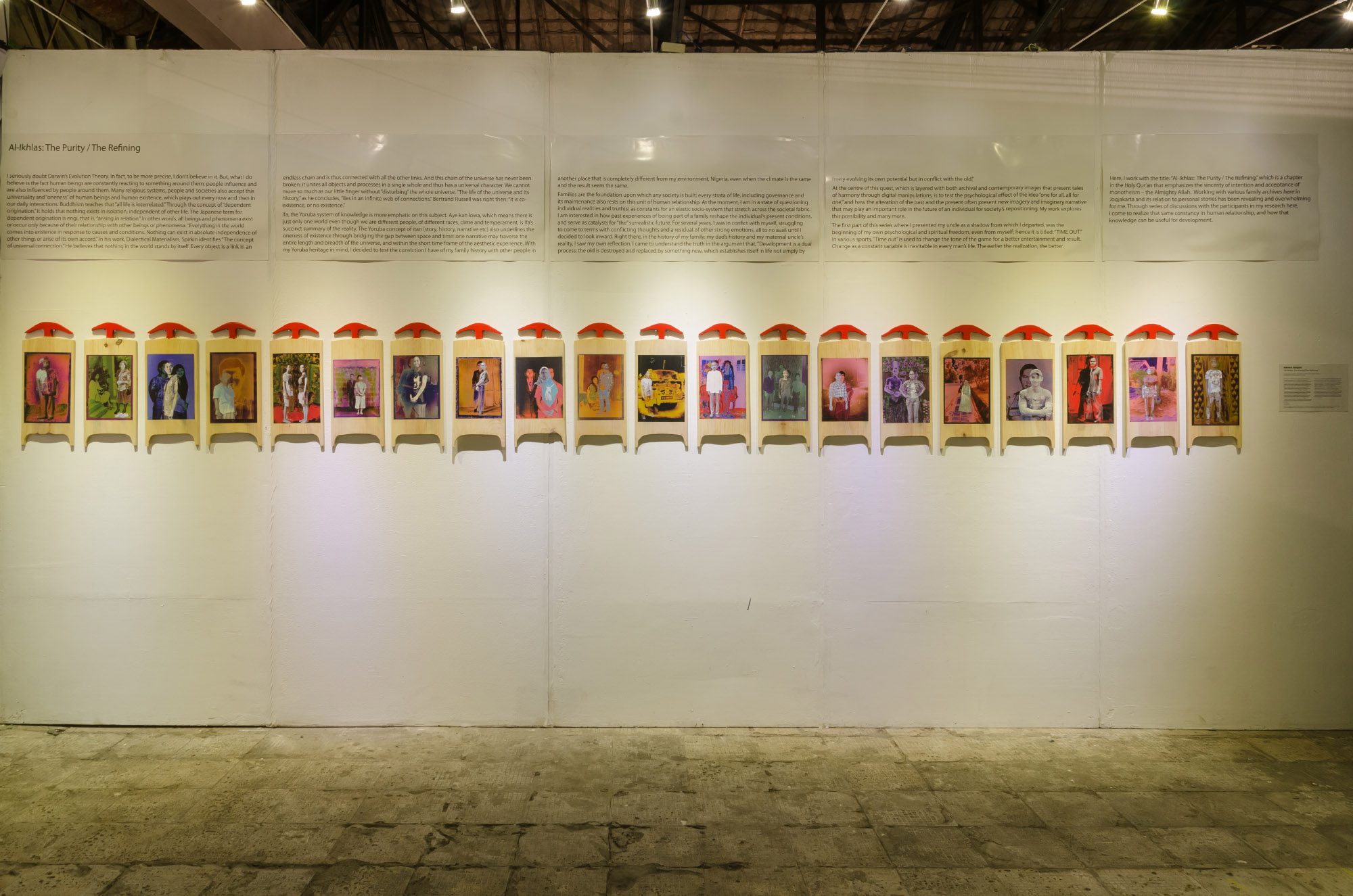 BO: You participated in the Equator III exhibition with artists from Nigeria and Indonesia at the Biennale Jogja XIII. How would you describe your experience accessing the archive of Indonesian locals used to create your work? And your experience in general working at Jogja for four weeks?

AA: I will say that I was mesmerized by the cooperation I got from various people I worked with in Jogjakarta. Judging by my experience as a photographer from Nigeria, I had thought that working with the different families’ archives in another space like Jogjakarta would be the most difficult thing to do. But then, it turned out that they are good people, always willing to help and share. They gave me access to their homes, their stories, and their archives. However, at the beginning of my research, it was not easy to get people to understand what my project was all about even though it has an Arabic title: “Al-Ikhlas: The Purity/The Refining.” In fact, some of the participants thought I was using the religion as a cover-up. They tested my knowledge by engaging me in serious conversations about the Surah [chapter] of the Quran, which I reference as a point of departure in my work. I remember one such meeting with an Islamic scholar, who engaged me with the interpretation of the chapter. We talked about Boko Haram, ISIS, the Tuareg rebellion, and other variations of Islamic extremism for more than two hours, then we concluded that if these sects understood the interpretation of this chapter, the world will be at peace. In talking to these people about their personal stories and family histories, they shared a lot with me. The discourse was sometimes emotional too, but I am humbled by their modesty and hospitality.

Based in Lagos, Bukola Oye is a freelance art journalist and founder of the Lagos art review platform The Sole Adventurer. She is a contributor on IAM Africa online in Amsterdam and Mania magazine in Lagos. Oye participated in the Culture Journalism Workshop organized by Contemporary And in Lagos.