Our author Elsa Guily takes a closer look at the show Useful Dreams by Abdoulaye Konaté.

Between figuration and abstraction of forms, Useful Dreams presents an overview of the work of the artist Abdoulaye Konaté, shown in the Blain|Southern gallery (Berlin). This impressive vertical duplex space was ideal for displaying the subtle workmanship of the visual and thematic metaphor that evokes the permanent tension between universal and local expression in Konaté’s art. 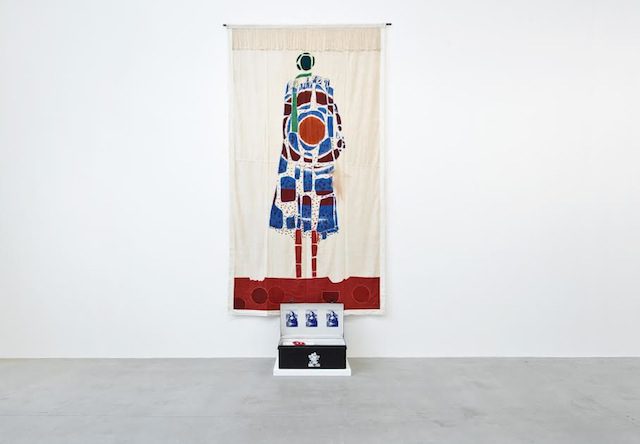 The curator Koyo Kouoh chose to begin the show with the work Lutte contre le HIV, a concrete rather than symbolic introduction. First, the heavy significance of the title of this work sets the tone, using artistic language to restore the body and material to today’s reality. Following his debuts on the art scene in 1991, Konaté’s desire to exhibit his work is situated in the immediacy of reacting to the socio-political landscape in Mali, of opposing social violence with his creative gesture as part of an international resonance. Art, then, is a total field that allows him to express his individual commitment at the heart of a social body. Second, this embroidered canvas fabric in a large vertical format shows the variety of Konaté’s visual language. A ‘weaver-painter,’ he explores the relationships support/surface, forms/colors in an overall composition that reaches to the ground. The work deals with the materialization of space, formalized by gathering the objects together at the foot of the canvas, inscribing the whole in the three-dimensional scope of an installation. 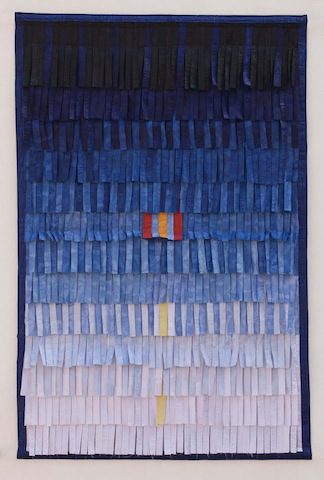 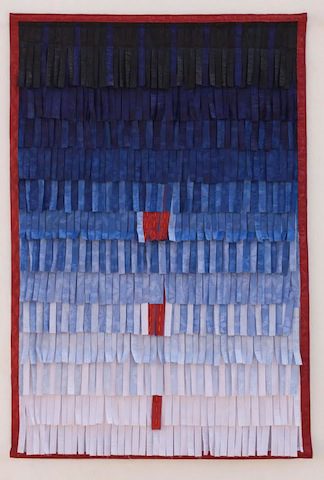 Moving on gradually through the exhibition space we discover, to our right and left, the recent series Compositions, and then the two series Couples and Croix, presenting a polychrome panel typical of the artist’s famous tapestry dyeing. Konaté uses fabric like a palette and gives it color treatment at the neurological point of its workmanship. It divulges the relationship of the color chart and its tonality, addressed completely to the monochrome. Composed of carefully cut identical cotton strips, Composition : No.15 and Composition : No.16 appear as a subtle pictorial gesture. Viewed face on, the accumulation and superimposing of strips creates a surprising optical effect and makes us think of the touch of a paintbrush. Exploring the esthetic wealth of the textile cloth, its delicate visual and tactile qualities, Konaté works with it in a painterly manner. He develops a ‘painter’s body language,’ using surface flattening while playing with the visual effects made by the pattern shades of wax cloths and printed cottons. In terms of composition, he uses techniques from sewing and embroidery to set the line, to draw the outline. This visual metaphor for the dialogue between painting and drawing is visualized using the cloth, whose supple quality enhances the effect of expanding the horizon. The work merges into the wall, eradicating the traces of hanging, of suspension. Seen from a particular angle, these compositions seem to us almost like murals. Emphasized by its sculptural material in semi-relief as well as sharp black-and-white contrasts, Croix de Lumière leads us to discover the deepest shades of grey. This exploration in a large-scale format develops a spatial energy, sensitive, reinforced both by the series work and the visual games between the intricate details used, starting with the patterns and range of the materials.

Continuing in this color flow, we come face to face with the work by Konaté that particularly interests us. Gris Gris Blanc is a vast canvas woven in half relief hung horizontally from the wall, with sewn-on cloth amulets. The whole work appears in a monochrome beige tone that gives this hanging masterpiece a central place like a light sensor. It creates a new balance of the tonal space evolved in research on color. It is a key work because it symbolizes Konaté’s committed effort to use artistic language to make the body and material part of the information system again. The work is actually inspired by a Malian tradition related to textiles: one traditional garment is a hunters’ jacket hung with charms whose function is to communicate the exploits of the wearer as the carrier of history, of narratives of his people’s customs. A fabric fragment from the Igbo people, found in Nigeria and dating from the 9th century B.C., indicates that the textile tradition is one of the foundations of African culture. It is not only used as a personal and domestic object but also to support communication across the centuries. Linking up with his cultural heritage, Konaté affirms a visual language between painting and writing by reappropriating traditions and costumes connected with textile processing. 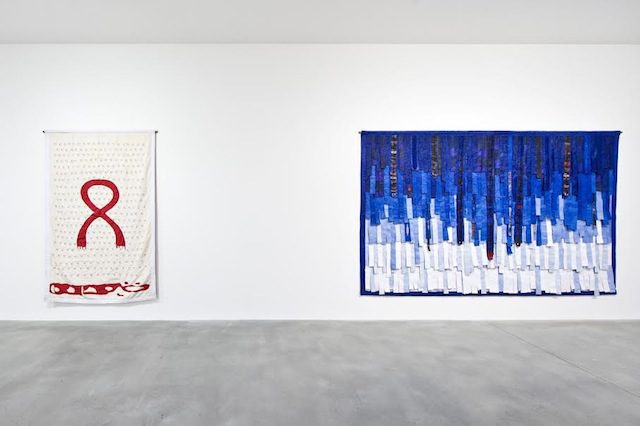 The artist in his role as historical witness intervenes in the material world, the world of the object, eliciting a simulation by transforming it visually. In this particular work, the spread-out garments symbolize the absence of massacred bodies. This creates a physical situation for confronting the theme of the work, suggesting that human identity is not fixed or static but is actually involved in a constant flux of varying physical and psychological states. 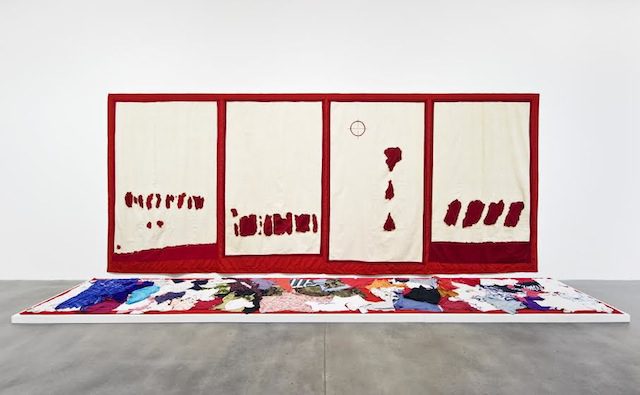 The artistic process becomes a way of being committed toward people, of delivering a message on the variations of the precariousness of life, and expressing vivid criticism of geopolitical issues in the age of globalization. By rejecting localism of thought and isolation of information processes, Konaté’s work is designed to circulate in the many exhibition spaces across the globe in which the experience of perception is tested by an invitation to become aware and find fresh perspectives. The visual language of Konaté’s works, between chromatic lyricism and the duality of made to measure title tags, are part of a writing of history that never stops (re)defining and re(reading) itself from every angle. This affirmation of a visual handwriting also applies to a work around signs and symbols. The Red, which appears in his oeuvre like a luminous point of tension in composition, intervenes like a guiding thread in the narrative, enabling various symbolic interpretations around the color red. It leads us easily up to the next floor of the gallery, continuing our tour and forming a bridge between Konaté’s different works despite their formal diversity of symbolic abstraction in representation of the sign. The most poignant of these is Bosnie Angola Rwanda (1995), a homage to the dead after the genocides that occurred at the end of the 20th century. The visual intervention allows remembrances to be marked in social and cultural space.

Elsa Guily studies art history and is an independent critic living in Berlin, specializing in the relationship between art and policy.