In the summer of 2015 Adrian Piper initiated a peculiar email correspondence. Shortly after garnering the Golden Lion at the Venice Biennale for The Probable Trust Registry: The Rules of the Game #1-3, she approached Udo Kittelmann, director of the Nationalgalerie in Berlin, trying to persuade him to buy her installation. As a Berliner by choice, Piper wanted her installation to be on display in the German capital and advertised her piece with the declaration that it cost “a mere fraction of one of Jeff Koons’s Balloon Dogs”. And isn’t it a delight, for once, to see mirror-polished white mediocracy being pushed to the sidelines for the sake of Black artistry?

As one of the pioneering conceptual artists of her generation, Adrian Piper has been exploring the topic of personal subjectivity throughout her career. Her body of work spans from an intimate meditation on Black womanhood, as in works such as Vanilla Nightmares (1986) or Cornered (1988), to more philosophically grounded themes including language and infinity, as in one of her more recent works, Everything #21 (2010-2013).

In The Probable Trust Registry (2013-2015) we see these two fields collide: a way for Piper to demonstrate that the personal and the political are inseparably linked. After the installation was on view in New York in 2014 and in Venice in 2015, the show was acquired for Berlin’s Hamburger Bahnhof and opened this February – marking Piper’s first solo exhibition in Germany.

Upon entering the main hall at Hamburger Bahnhof, one is faced with a corporate setting: ceiling-high dove grey partition walls divide the space into three standardized segments. In front of each partition there’s a gold and circular reception counter with a friendly staffer dressed in black smiling from behind it. The sheer endless partition screens are embossed with golden letters; each of them displaying one of the following sentences:

I WILL ALWAYS BE TOO EXPENSIVE TO BUY.

I WILL ALWAYS MEAN WHAT I SAY.

I WILL ALWAYS DO WHAT I SAY I AM GOING TO DO. 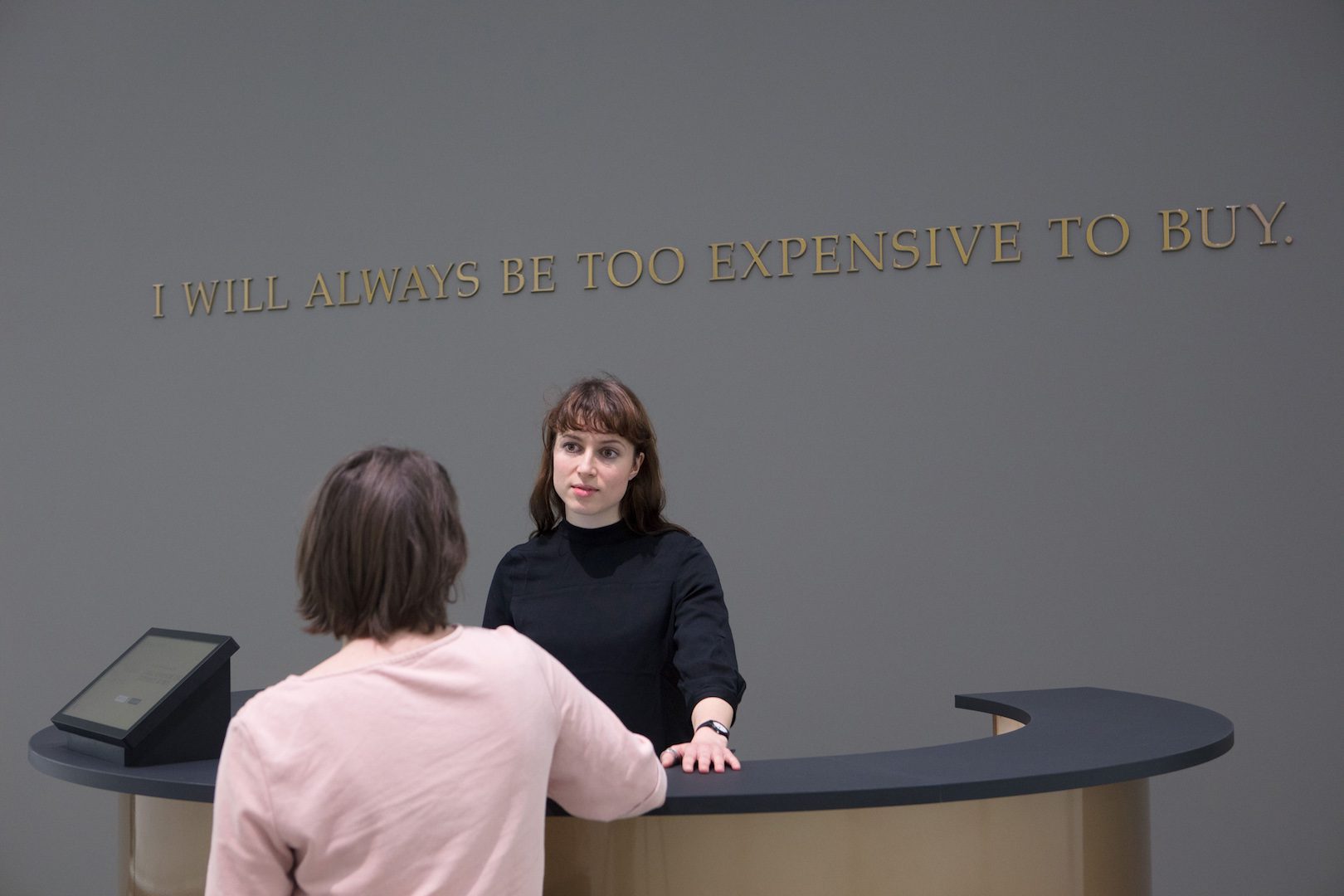 Here the visitors to the museum can approach each desk, engage in a brief conversation with the receptionist and ultimately sign a contract to commit themselves to one, two, or all three of the declarations. Once inside the exhibition space, the viewers inevitably participate in a collective experiment, regardless of whether they decide to sign a contract or not. In this respect the piece is as performative as it is introspective.

After the end of the exhibition on 3rd September 2017, the museum will compile a digital collection of all personal declarations gathered throughout the show in order to send it to its signatories. Said documents become part of the inventory of the Nationalgalerie – Staatliche Museen zu Berlin, and will only be made available to the public 100 years later.

At a time when right-wing movements are on the rise in both Europe and the US, it seems more vital than ever, to uphold democratic values. And just like society itself, The Probable Trust Registry is intrinsically political. As a collective and ongoing artwork, it reveals its success or failure subsequently to its construction. As a philosopher, Adrian Piper savors the quandary that occurs in the process of such performative pieces. Still, trust is never a given and even setting up a registry in form of legally binding contracts does not guarantee confiding relations. Thus, more than anything else, the installation’s title and its key word “probable” hint at its principle of uncertainty.

In this light especially, positioning the installation in the main hall of Hamburger Bahnhof seems like an interpretive misdirection. While the curators at the Elizabeth Dee Gallery in New York as well as the Venetian Arsenal fittingly referred to the bureaucratic lunacy of the experiment by making use of a cramped interior space, the luminous and spacious placement at Hamburger Bahnhof evokes a delusive openness. Hence, a coherent spatial strategy falls prey to conspicuous placing.

The stage-like presentation of the installation lends the act of signing a social contract an impression of showmanship. This seems hardly surprising at a time when performative politics have become a widespread modus operandi. But instead of making this ill-at-ease element of theatricality a subject of discussion, the numerous readings and exhibition talks that accompany the show circle around the obvious themes of responsibility, sincerity, and transparency. This, furthermore, reveals a curatorial concept that prides itself on taking a political stance; as if the exhibition itself were a paradigm of humanism.

While The Probable Trust Registry is certainly perceived as a meditation on moral integrity, it may just as well be interpreted as a critical reflection on the increasing rationalization and accountancy of interpersonal values. For the particular beauty of Piper’s piece lies in a utopian gesture: the impossible attempt to quantify the incalculable.

Based in Berlin, Jessica Aimufua is a writer, editor and translator.