Nadia Sesay spoke to multidisciplinary artist Kiluanji Kia Henda about his first solo exhibition in the United States, “A City called Mirage” as well as his love for architecture and the desert. Henda's four-channel video installation and his three interconnected photography-series are also picking up on Dubai as an allegory for the conception, realization and destruction of modern cities; which to him makes perfect sense.

Kiluanji Kia Henda, A City Called Mirage, 2013–2017, one of fifty black and white photographs. Courtesy of the artist.

Nadia Sesay: Take us back to that moment you discovered a rusted sign with the word “miragem” in the Namib desert. How did it inspire this exhibition?

Kiluanji Kia Henda: It was in 2004 when I decided to travel to the desert in Angola. It was a journey through a country that had been in civil war for 30 years and where it had been difficult to travel to many places. It was a way of discovering the country and also myself, in terms of me needing isolation at that time. The desert has always been a fascination for me, and I wanted to see how I could combine that with another of my passions, architecture. I wanted to find a way to talk about these two different things in the same space. 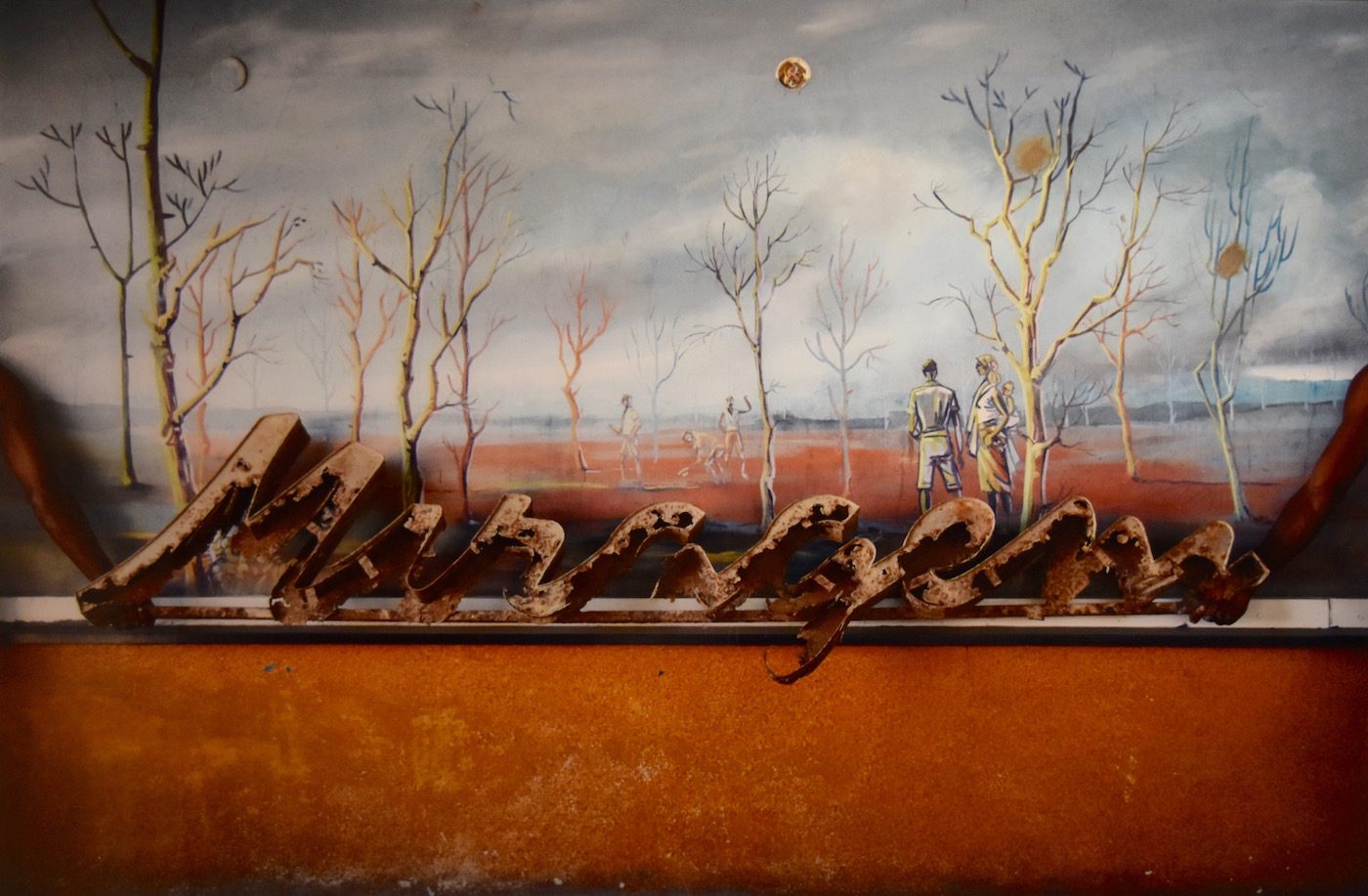 So I found the sign in a little town in the south of Angola. In a way it was disturbing because it seemed the city was being eaten by the desert – it had a dystopian theme. It also reminded me of how many societies are built from an iron structure and how they can also become that mirage.

NS: How did the location of the desert impact your artistic practice?

KKH: Well, the desert for me has always been this place where there is no history – no beginning, no center. At that moment I wanted to escape and start a new narrative within my work, and the desert was perfect for that. It was a way of being out of civilization, which was exciting to me as an artist. The desert became a blank page.

NS: Is incorporating architecture into your work part of this “new narrative”?

KKH: I wanted to be an architect when I was a teenager, as it was the only way I could be closer to art in Angola – there was no school for art. During that time, in the 1990s, to dream about being an artist was madness. The architecture in Luanda is very special and influenced by modernity. In Angola white Portuguese architects had more freedom to materialize new languages within the architectural universe. And so for me the way Luanda was conceived was always a very interesting study case. In recent years there was a national reconstruction, so a lot of buildings were appearing and changing the landscape of the city. 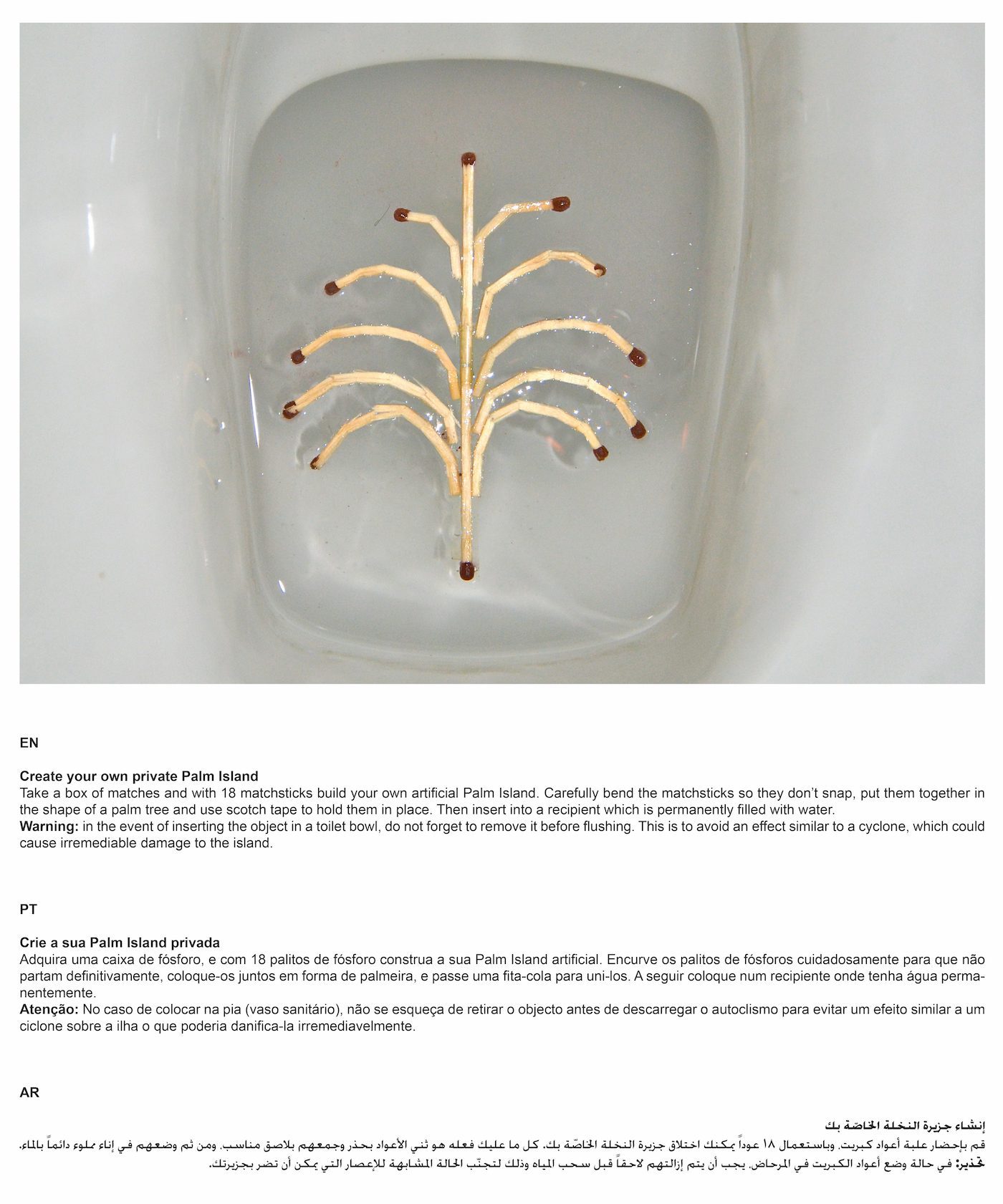 Kiluanji Kia Henda, Instructions to Create You Own Personal Dubai at Home, 2013, one of seven photographs. Courtesy of the artist.

NS: Why did Dubai emerge as a place of particular interest to you?

KKH: I was really fascinated, maybe in a negative way, by the ability to build a city in the middle of the desert, but at the same time have a desert inside the city. Dubai was where I could tie together two of my passions – the desert and architecture. At the same time, it was revolting. It makes you feel angry to see how we can be so far away from the needs of the majority of people, just spending money and resources to achieve someone’s dream. Dubai had a lot of influence on what has been built in Luanda, and in other cities in Africa. Some people call it “Dubaization.”

All these efforts remind me of the tower of Babel, where humanity was united in building a tower to reach the skies but was then separated by God so that everyone would speak in a different language. In the end it was not possible to finish the tower because the people couldn’t understand each other. If you look at who built the tallest tower in Dubai, the Burj Khalifa, you find people from Bangladesh, Pakistan, Germany, and America … from every part in the world. And now there’s a shortage of sand. People want to buy sand for artificial islands, so maybe in 100 years there will be no beaches left. Dubai touched on a lot of things for me, not only socially but also on religious and economic issues. 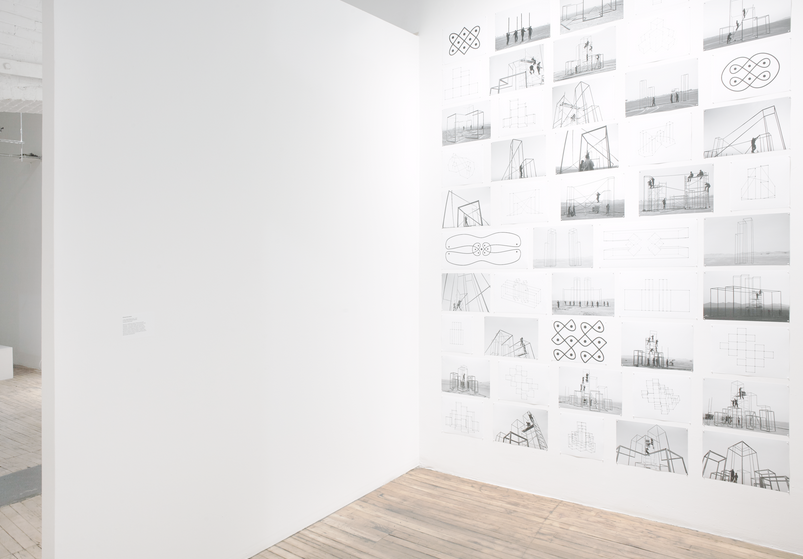 NS: Your exhibition features traditional Central African Sona drawings. How did you come across them and at what point did you decide to include them?

KKH: Those drawings are from Eastern Angola and are very connected to ethnomathematics. They were important to keep oral tradition alive. I wanted to use them because they are ephemeral – they are sand drawings. Normally the storyteller would erase them and draw another for the next story. They have that ephemeral characteristic that every city has. If you look to the universe, how many civilizations have existed and vanished also? For me they give humanity to the sculptures in the desert. It gave a new dimension to the work.

NS: You mentioned you discovered the “miragem” sign in 2004. How did that project come to realization during your current residency at International Studio & Curatorial Program (ISCP) ?

KKH: I first showed this project in a residency in Jordan, and then in another residency in Sharjah, so part of it was already created. Some black-and-white photographs that I’ve never shown before are new to this residency. A lot of the things I am showing are very connected to New York. When I first came to New York, I felt I should work on something connected with architecture. In this city I thought, how can we make so much from the earth?

NS: Earlier in our discussion you said that whether in Luanda, Lisbon, or even New York City, the urban context is homogenous. Can you expand on this?

KKH: We have to go back in history and see how different places are connected, even if they were on different continents. Often we were connected by slave commerce. This sad history brought us to a common culture, what some call the “Atlantic culture.” Even in the cold war, where Angola had big support from Russia, the government was connected with Russia but culturally we felt closer to America. I look at those cities like Luanda, with the need to be modern like everywhere else, and think how homogeneity was a violent process that we need to be aware of when we’re discussing things like identity and culture.

A City Called Mirage is on view at ISCP in New York City through October 6, 2017. This exhibition is curated by Kari Conte, Director of Programs and Exhibitions at ISCP. Kiluanji Kia Henda is in residence at ISCP from June 1-August 31, 2017, sponsored by the Dennis Elliott Founder’s Fund and Tauck Ritzau Innovative Philanthropy.

Nadia Sesay is a Sierra Leonean based in Washington, D.C., traveling the world to rejoice in art. She is editor of BLANC Modern Africa, a magazine on contemporary art and culture inspired by Africa and its Diaspora.

What exactly is "African art"?

In conversation with David Adjaye

"It is an exciting time for architects in Africa"

Create Your Personal Dubai at Home