Bamako Hypothesizes the Future without Neglecting the Past

In his book Afrotopia, the Senegalese economist and scholar Felwine Sarr advocates for a new Africa as a place that can and will materialize, since “there is a continuity between the real and the possible.” And one of the steps towards that, he argues, is the need for the continent to consider its situation in its contemporaneity, while being consistently true to itself.

Borrowing its title from the same book, the 11th Rencontres de Bamako – African Biennale of Photography in Mali explores what Africa’s futures might look like through the eyes of 40 artists. This edition’s curator, Marie-Ann Yemsi, approaches the theme from different angles to produce an exhibition that’s more grounded on futurity than the utopian futurism. Hence, Afrotopia doesn’t neglect the past nor present, rather, it connects them to a possible future. As such, the biennale, which takes place across different venues in and outside of the National Museum of Mali, features works that deal with various aspects of life on the continent – from queerness to the role that images play in society. This wide variety is also present in the mediums featured, which go well beyond photography, including video and installation.

The main hall in the museum is the venue that best exemplifies this heterogeneity with brave work that addresses hard histories and truths with a positive outlook. For instance, Délio Jasse shows The Lost Chapter: Nampula 1963, 2016, a series of discarded photographs from former Portuguese colonists in Mozambique that he found in flea markets in Lisbon. The Angolan artist manually reworked these images of white colonists going about their lives with few signs of Black lives, by highlighting the postal stamps’ date and location and other inscriptions. By doing this, the artist juxtaposes the attempt at losing individual memory with his attempt of rebuilding a collective memory, while setting the tone for the whole exhibition: that we can only build a future if we also deal with the past. Dealing with hard stories is also what Johannesburg-based Gabrielle Goliath does with Personal Accounts (2013). The video installation looks at issues of gender and violence against women by presenting the stories of rape victims in South Africa. The five protagonists are purposely interrupted while speaking to emphasize the difficulty of discussing such issues; and while there is no closure in the work, the faces of the five women express a sense of relief for making the effort to speak out. 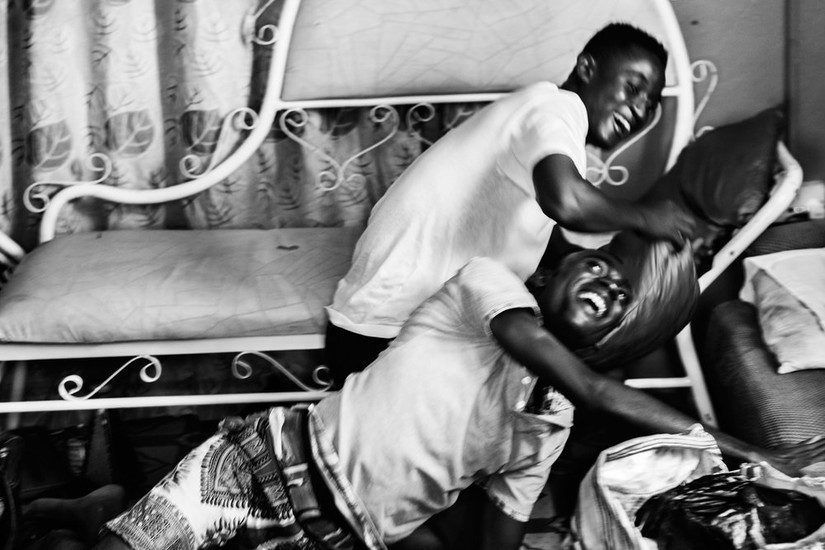 Eric Gyamfi, Henry and his Boyfriend, Mingle. From the series Just like us, 2016. Courtesy the artist

Soweto-based Musa N. Nxumalo complicates notions of how the present is “better” than the past. In his photo series Alternative Kidz Series (2008-9) and The Anthology of Youth Series (2016-17) the artist examines the complexities of modern youth life in South Africa using documentary, portrait and party photographer styles. On the one hand, social life, networking and partying require an immense amount of energy; but on the other, so does fighting for rights – so how can and should young people today negotiate this energy? In these black and white series, the artist also juxtaposes the aesthetics of party and protest, which bear an uncanny similarity, blurring the lines between the concepts of struggle and pleasure. Also documenting the resilience of Africans, this time in Europe, is Comoros-born Mahamoud Ibrahim. His film Escale à Pajol (2015) not only depicts the struggles that many migrants and refugees from the Middle East and Africa go through but also how they self-organize to make their political stance heard on the streets in defiance of antagonistic authorities and the media. Adding to the discussion of the “present” is Accra-based Eric Gyamfi. With his complex, touching, and honest installation of images on the wall entitled Just Like Us (2016), the photographer questions the place of queer communities in Ghana. His photographs are a candid portrayal of how LGBTQI communities live, while being positioned between abusive press comments and opposing online discussions on the subject of homosexuality. Blank post-its across the installation invite visitors to leave their comments. In real life as with this work, the conversation has only just started. 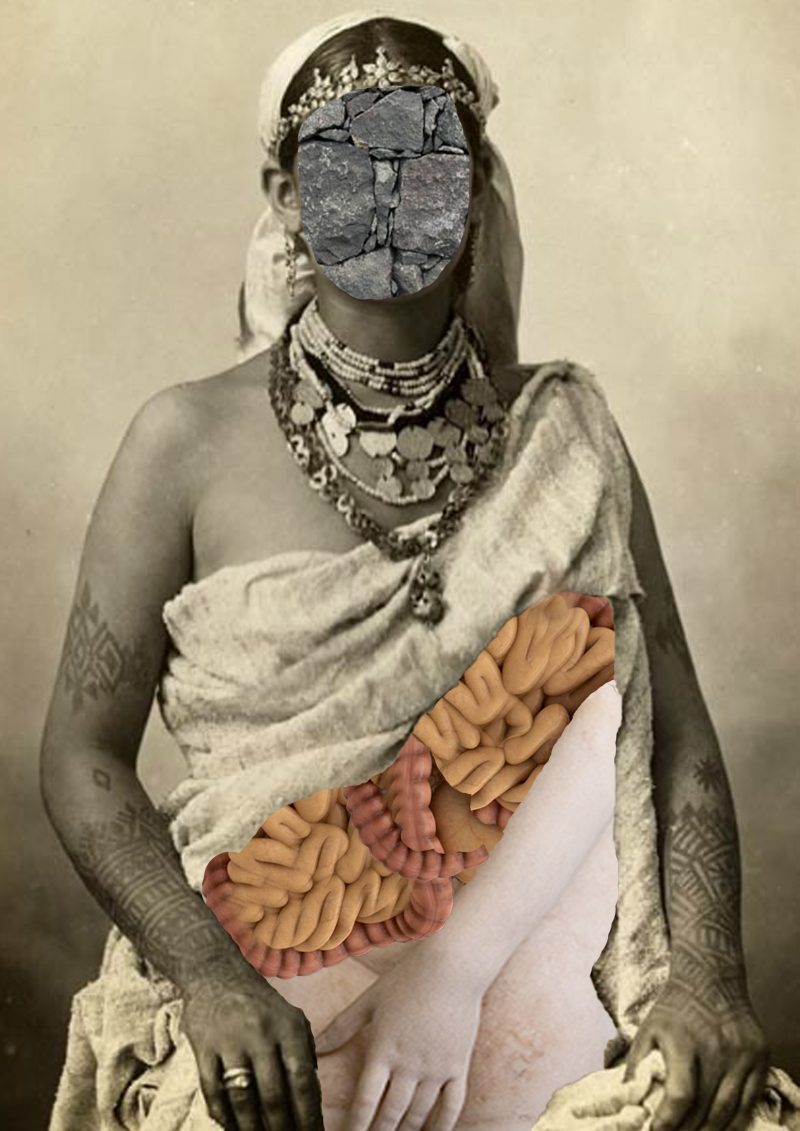 What is perhaps surprising in this biennale is the artists’ refusal to create idealized and utopian visions of the future. Instead, they question what is already going on with analytical works that challenge naive visions. They also probe past and possible failures as a means to shape the future. Bianca Baldi’s Eyes in the Back of Your Head exposes modernist delusions of grandeur using Funkstation Kamina, the first telecom tower in Togo built by a German company, as an example. Lola Keyezua resurrects the old ghosts of female genital mutilation with her installation Stone Orgasms (2015). And Rahima Gambo’s photo and illustration series goes against sensationalist media depictions and follows the individual lives of the Nigerian girls that were kidnapped by Boko Haram in 2014. Michael McGarry on the other hand looks into the modern ghost town Kilamba Kiaxi just outside Luanda that was built by the Chinese without taking into account the local reality. Girma Berta challenges the hierarchy of imagery with a series of works shot using a mobile phone. And Kelvin goes one step further by questioning the role of images themselves as objects. 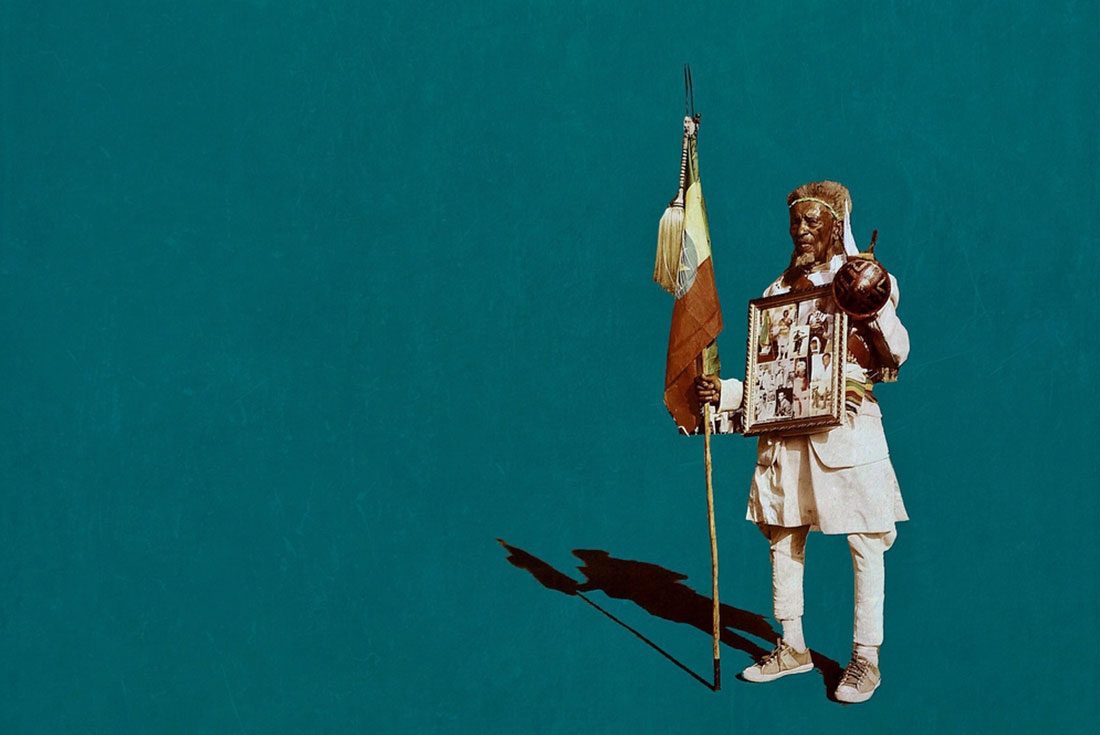 For the installation Things and Nothings (2017), the Accra-based artist printed images of car crashes on car and motorbike parts that are placed beside videos and projections. Hence, the artist attempts to free the images of their utilitarian qualities and systemic categorization, and by extension hypothesizes the purposes of images and who will control them in a future where image production is highly democratized.

Freedom and surprise indeed run throughout the whole of Afrotopia which as it turns out was a self fulfilling prophecy. “Of course, take it,” said Felwine Sarr when asked about using his book’s title for the 11th Rencontres de Bamako. “Take it, and make something else out of it.” And so they did.