The number of artists from the African Diaspora who enjoy considerable success in the international art scene has rocketed in the past years. Many of these artists have also chosen to invest back on the continent by founding art projects from residencies to institutions. We highlight some of these in this series, Giving Back to the Continent. First in line is Bandjoun Art Station, initiated by Barthélémy Toguo and Germain Noubi in Cameroon in 2013. Esther Poppe spoke to the artists about the founding of a small-town art institution with a strong focus on working with the local population.

C&: There is a strong social and political engagement inscribed into the concept of the Bandjoun Art Station. How do you manage to find a balance between your own artistic work, setting up exhibitions, traveling internationally, and being involved in running Bandjoun?

Barthélémy Toguo: I left Cameroon in the late 1980s to join an art school abroad because there was none in my country. After my training, first at INSAAC (Institut National Supérieur des Arts et de l’Action Culturelle), the national art school of Abidjan, then in Grenoble and finally in Düsseldorf, I decided to return to my country to create Bandjoun Station. My goal was to balance and maintain part of the production of contemporary art on the African soil, since African classical art has been stolen. The ambition of creating Bandjoun Station is the continuity of my commitment as an African artist. The expression of my work is partly integrated in this project. I needed a place where I could produce at home in Cameroon, while at the same time connecting with the local artists, the confreres[1] of the Diaspora, and my fellow artists in general. As the artistic director of our various exhibitions, I am involved with the local community, experimenting with them to trigger or strengthen their cultural and artistic fiber.

Painting workshop with Students of the Institute of Fines Arts of Foumban. Courtesy of Barthélémy Toguo

C&: What are the benefits of working in a space that is not in close proximity to a major city or the capital?

BT & Germain Noubi: The advantage of the urban periphery[2] is a larger production area; having a quiet space to better push reflection. It is also the place par excellence to integrate the population that one would like to associate with the project, the rapport with the human is palpable.

C&: How is the programming and scheduling of events and workshops in the Art Station balanced between the different capacities of the temporary exhibition space, the permanent collection space[3] and living space for workshops and residencies? How do you structure this process?

BT & GN: We have regular activities at annual events, one international exhibition per year, such as the Gold Star Festival, which always takes place on the third weekend of December. The rest of our programming depends on the national and international cultural activities we are associated with. We eventually select the projects of three to fourartists per year for a residency stay of four to eight weeks throughout the year. 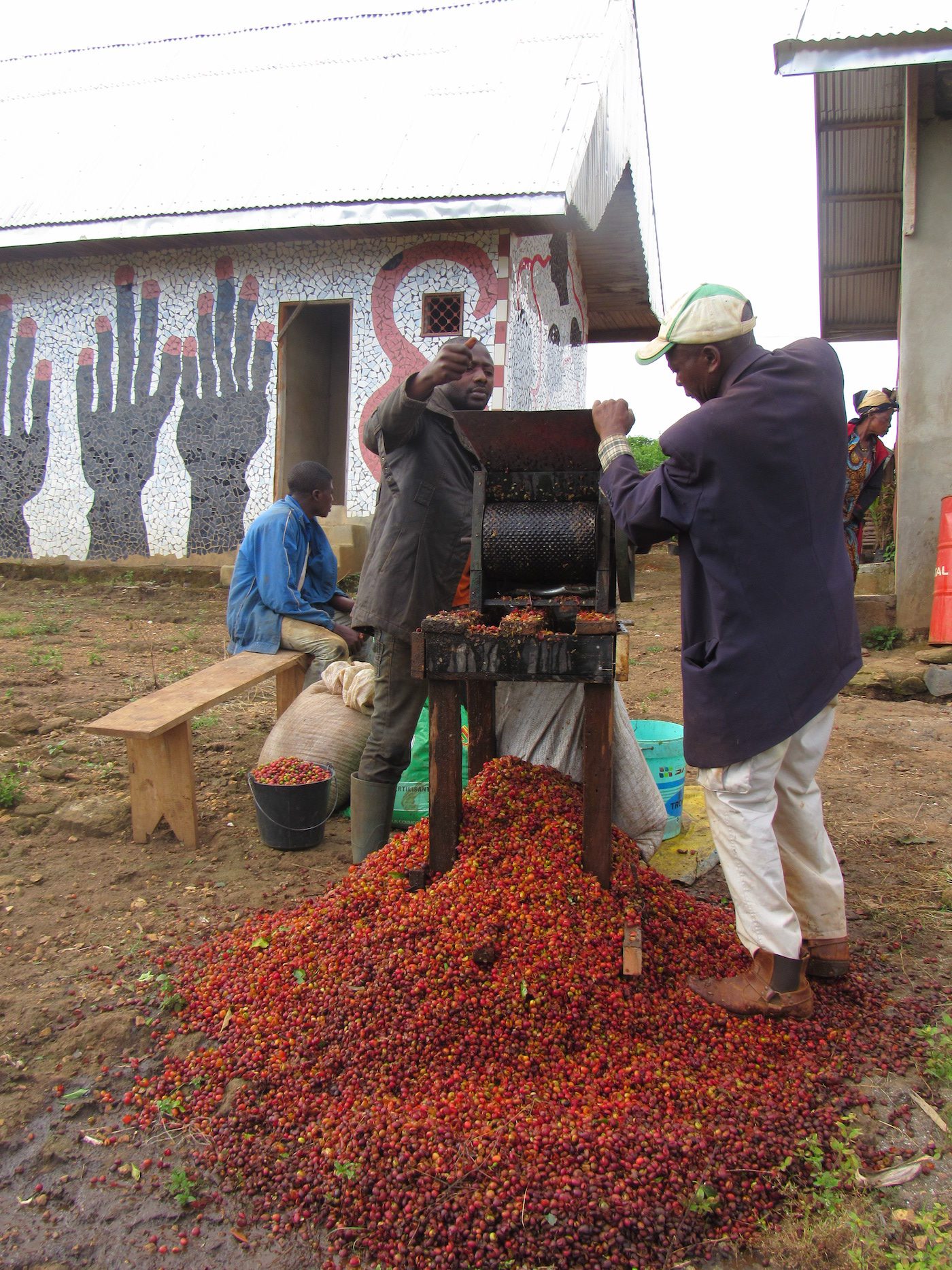 C&: Could you speak a little about the different kinds of projects that the Art Station has been working on? How are they growing or how have they had to adapt to change over time? One example is the coffee project, which you incorporated into the 1-54 art fair in 2016 at Somerset House in London.

BT: In Bandjoun Station we promote all kinds of visual artists with international exhibitions that last six months to oneyear, or temporary ones that last from one week to two months. Since the inauguration in 2013, we have realized sixmajor exhibitions featuring both young artists, who were little known (including Jean David Nkot, Yvon Ngassam,), and great established artists (such as David Lynch, David Hockney, Louise Bourgeois) for an optimal dialogue. At the same time we set up the “Mobile Cafeteria” project, which is a traveling and participative exhibition about the experience of tasting 100% Arabica coffee. This coffee is produced, toned and ground on site at Bandjoun with the participation of the local population and young students. Our average coffee production is around 750 kilograms per year.[4] As per relational aesthetics, the exhibition is conceived as a user-friendly device to reflect on the commercial relations between the countries of the North and the South, their economic, social and cultural consequences, as well as their possible transformation. The activation of this project through festivals, fairs, museums and cultural spaces is in consistency with this place. The type of furniture is often representative of the socio-cultural environment. After the 1-54 art fair in London, the mobile cafeteria project was presented at the Espace Rond-point Project in Marseille, at the Pool Art fair in Guadeloupe (2017), the Roskilde Festival in Denmark (2017), before joining the visual art biennale in Yaoundé (RAVY, 2018). 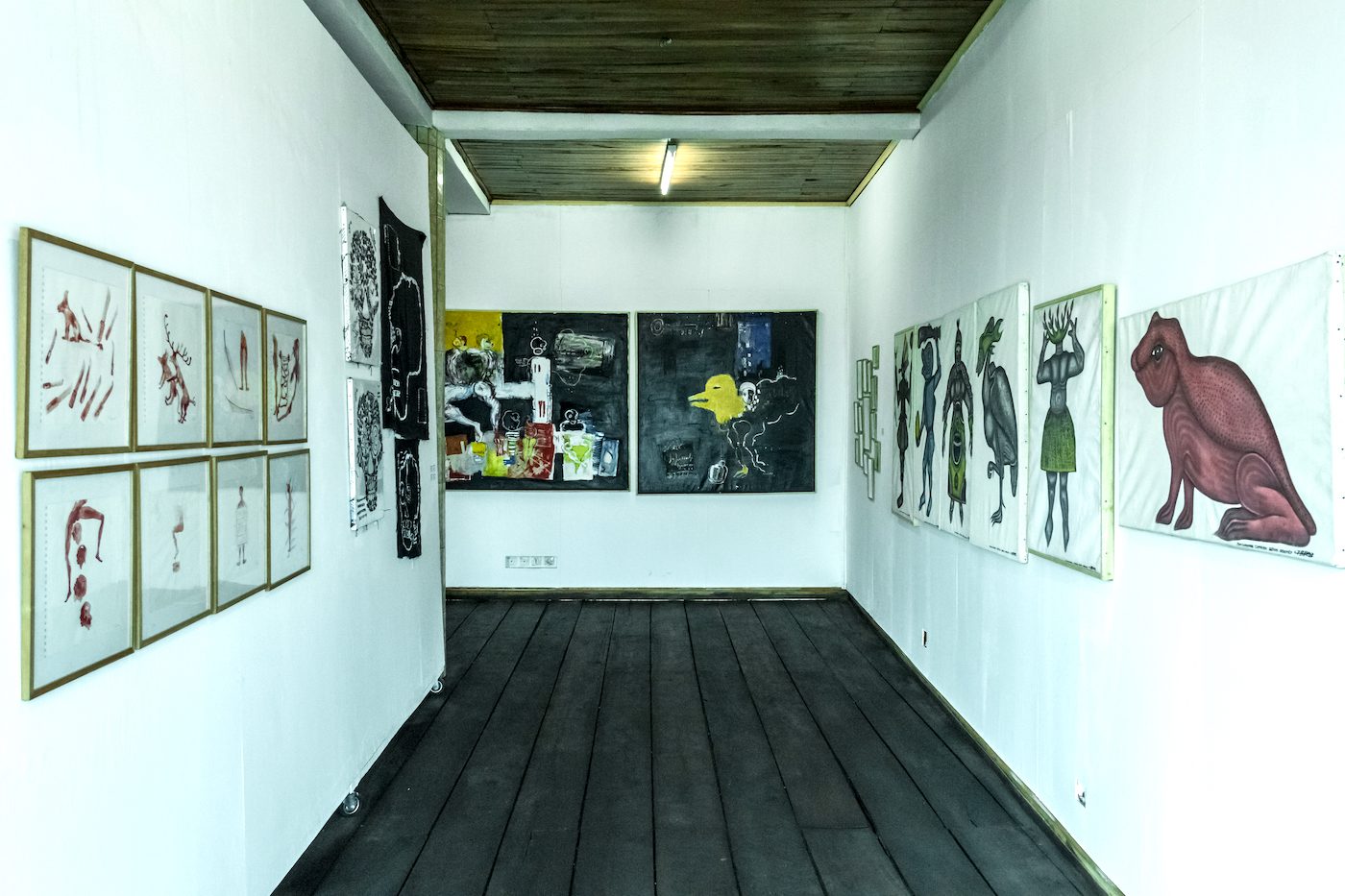 C&: Could you elaborate a little on the organizational structure of the Art Station?

BT & GN: Three permanent staff members coordinate Bandjoun Station’s activities: the artistic director Barthélemy Toguo, Germain Noubi as managerial director, and Carine Djuidje, who also deals with cultural mediation. But depending on the projects we also collaborate with and invite temporary scenographers and curators, etc. to assist us.

C&: The Art Station has been running since 2007, how would you describe its different stages, and how are you funded?

GN: In ensuring the artistic direction of the center, Barthélémy Toguo is the main funder. Due to the modest funding it is becoming increasingly difficult to carry out large-scale activities. The financial deficit causes difficulties for the organization of artist residencies, temporary exhibitions, and multidisciplinary workshops. However, we have maintained our work and carried out six international exhibitions: Mes Amours (2013), curated by Barthélémy Toguo;, Stories Tellers  (2015), curated by Germain Noubi and Ange Tchetmi; Dialogue(s) (2016), curated by Germain Noubi and Carine Djuidje; Behind the Portal (2017), curated by Germain Noubi; Newwwar it’s just a game? (2017), curated by Marion Zilio; Woman Power (2018), curated by Carine Djuidje and Alicia Knock; and a show that opened in November 2019, Retours à l’Afrique, curated by Androula Michael. Regarding the involvement of foreign curators, we are trying to carry out activities that include the local environment.

Barthélémy Toguo was born in 1967 in Cameroon and lives between Paris and Bandjoun. He trained at the École Nationale Supérieure des Beaux-Arts in Abidjan, Ivory Coast; the École Supérieure d’Art in Grenoble, France; and the Kunstakademie, Düsseldorf, Germany. He founded Bandjoun Station, a centre for artistic exchange between local and international artists featuring residencies, an exhibition space, a library and plantations in Bandjoun, Cameroon, in 2007.

Germain Noubi has been appointed Director of Bandjoun Station. He studied at the University of Dschang in Cameroon and graduated with a Masters in Management of Cultural Industries from Senghor University in Alexandria.

[2] Bandjoun Art Station is situated between the high plateaus of Western Cameroon, 3 km from the town of Bafoussam, and 300 km from both Douala and Yaoundé.

[3] Permanent Exhibition at Bandjoun Station: “The collection of modern and contemporary art of Bandjoun Station has been compiled by Barthélémy Toguo during 25 years of exchange with creators and art lovers around the world. A collection of modern and contemporary art that materializes the artist’s/collector’s choices from the greatest 20th century artists in Africa and around the world and the best emerging creators of our time who are featured in periodic rotation on the second and third floors. This collection – unique in Africa – the antipodes of the banal cultural ghetto, is one of the most beautiful of the continent in terms of quality, diversity of generations, techniques and origins. Its major mission is to safeguard part of contemporary African production on its soil, alongside works by our colleagues and friends from the rest of the world, as a critical and vigilant act.” Source: https://bandjounstation.com/contemporary-art/

[4] In addition, I decided to create other artistic and agricultural elements. This way of combining both environmental issues and social experimentation sets an example for the local youth; it is a way of creating a dynamic and equitable relationship between guests and hosts, as well as demonstrating the central importance of agriculture in our quest to become self-sufficient in food production. It is a strong political statement; our artistic breeding ground will in turn give birth to a coffee plantation, a critical act which magnifies the artistic gesture and powerfully critiques what Léopold Sédar Senghor has called “the deterioration of the terms of exchange, in other words, the lowering of prices for export imposed by the West, which punishes and impoverishes the farmers of the South.”

Tavares Strachan: The Idea of a Parallel Universe