In 1882, the Brazilian writer Machado de Assis wrote about the painting A fundação da cidade do Rio de Janeiro (The Founding of the City of Rio de Janeiro) by Antônio Firmino Monteiro (1855–1888). He described the work as a “reality” in the history of the capital of the empire, calling Monteiro a “serious artist” and a “national painter.” These three aspects, which give glimpses of the artwork and its creator, enliven my thoughts on the exhibition Territórios: artistas afrodescendentes no acervo da Pinacoteca (Territories: Artists of African Descent in the Pinacoteca’s Collection, December 13, 2015 – June 13, 2016), curated by Tadeu Chiarelli. This exhibition delineated the presence of such artists in the history of an institution celebrating 100 years of existence as well as honoring Emanoel Araújo, the museum’s first black director.

Monteiro’s painting took two years to complete and, in Machado’s appraisal, his draftsmanship, use of color, and composition all created an “excellent overall impression.” His work is featured in Territórios together with that of his contemporary Estevão Roberto da Silva, who in 1879 declined the Imperial Academy of Fine Arts’ second prize in the genre of still life. Silva’s “second place” points to the historically secondary position of black artists in Brazilian art historiography despite the unquestionable quality and legacy of many of the artworks that have been created. Their presence in Territórios illustrates this exhibition’s potential to cover two centuries of African-oriented artistic work motivated by the black social experiences of its creators, demonstrating that Brazilian artists of today have a historical context behind them. 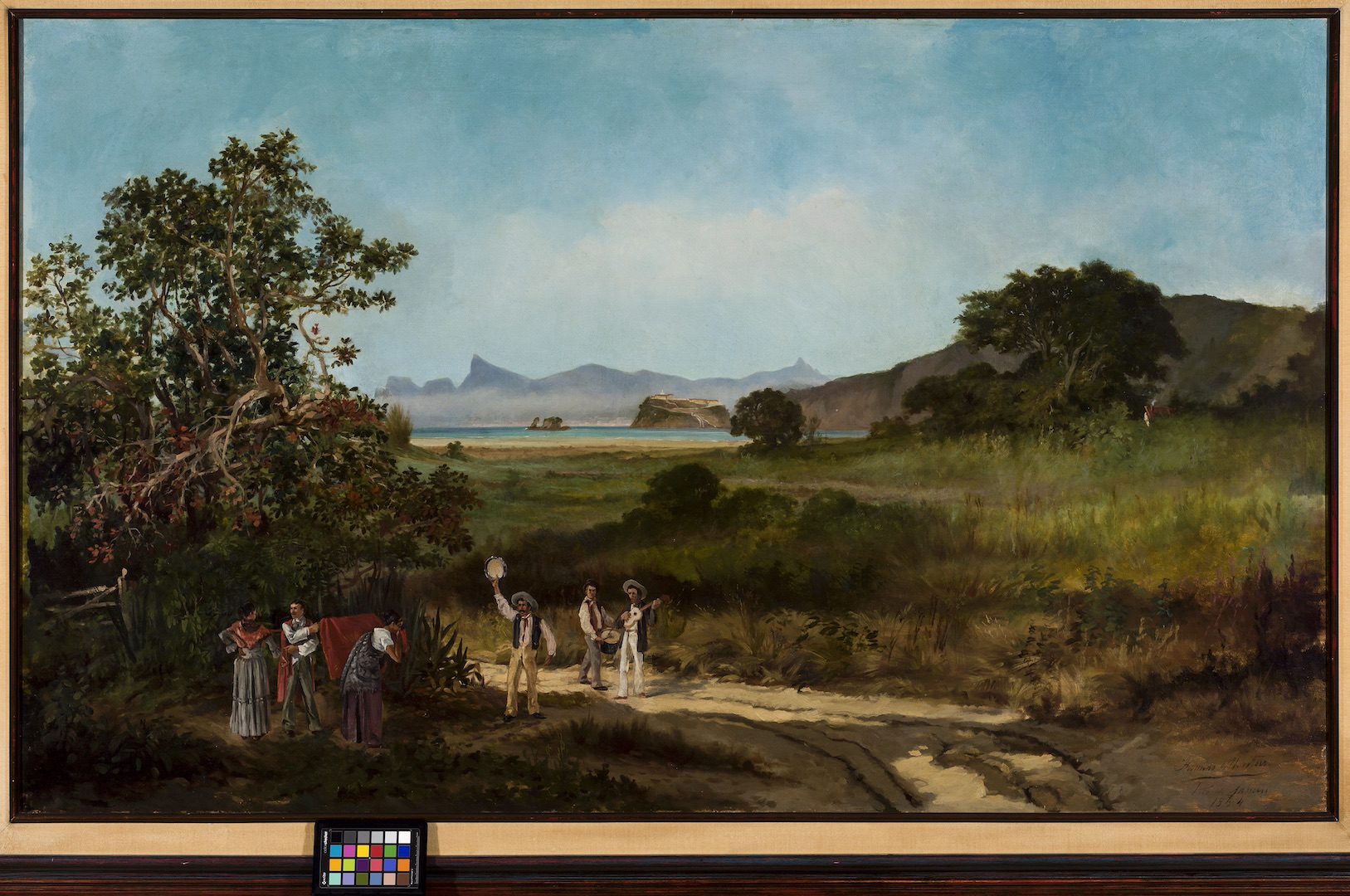 Apart from these two painters, others are distributed among rooms organized under three categories: European Matrices, African Matrices, and Contemporary Matrices. Firmino Monteiro appears in the first matrix with the painting Bandeira do divino (Flag of the Divine), which dialogues with the bronzes Ninfa Eco (Echo the Nymph) and Caçador Narciso (Narcissus the Hunter) by Mestre Valentim. Miguelzinho Dutra’s watercolors also appear in this matrix, as do the landscapes, allegories, and portraits in oil by the brothers Artur and João Timótheo da Costa.

In a way, the works in this first section complement those displayed in the African Matrices room, which include pieces by Emanoel Araújo, Edival Ramosa, and Rubem Valentim. These artists maintain a relatively explicit “African or African-Brazilian cultural ballast,” to borrow an expression from Clarival do Prado Valladares, an important author in the discussion of black Brazilian artistic production. Yet, is it possible to ask ourselves which Africas we are discussing here? And what relationship exists between these and the other Africas?

Contemporary Matrices is made up of work recently acquired for the permanent collection. It includes pieces that examine Brazil’s early history, such as Rosana Paulino’s Parede da memória (Wall of Memory), Sidney Amaral’s Incômodo (Uncomfortable) and Jaime Lauriano’s Êxodo (Exodus), as well as works that examine the relationship between bodies and public spaces, such as Rommulo Vieira Conceição’s Estrutura Dissipativa/Gangorra (Dissipative Structure/Seesaw). While these separate matrices make sense, there is an intentional interrelationship between these rooms that implies other connections between the artworks, sparking the curatorial imagination of the viewers.

Visiting Territórios creates a strong desire to see other artists with greater or lesser African or African-Brazilian ballasts incorporated into the privileged space of the museum’s collection in order to circulate in exhibitions inside and outside the country and to see their works stimulating academic research and being discussed in public and educational forums. They could spark arrays of critical thought, bringing creators and their work into broader dialogue within the collection itself, allowing for conversation among these works and others of different provenance, by a lineup of African-Brazilian, African-American, and African-European hands, and even perhaps contemporary African art.

It’s a “reality” that there has been a great deal of interest in the Pinacoteca do Estado de São Paulo ever since its founding in 1905 by Brazilian artists of European roots. Lesser known but no less important is the black presence in the museum’s collection dating to 1956 when Rio de Janeiro artist Artur Timóteo’s self-portrait was donated, a time when racism in São Paulo barred the integration of black men and women in multiple areas of the city’s arts scene: theater, film, visual art, literature and music. The presence of women in the collection is also notable, anticipating a social inequity that is only now beginning to be better redressed. Among the women artists are: Georgina de Albuquerque, Anita Malfatti, Djanira da Motta e Silva and Maria Lídia Magliani, the latter also on display in Territórios.

Under the leadership of Emanuel Araújo, founding director of the Museu Afrobrasil, the Pinoteca, through its network of benefactors created in 1992, acquired a significant body of work by African-Brazilian artists, including Mestre Valentim, Edival Ramosa, Estêvão Silva, and others, that diversified the museum’s aesthetic outlook. Even before Araújo, and shortly after the acquisition of Artur’s self-portrait, works of art in this sector were being incorporated into the museum’s collection: artists such as Otávio Araújo, Genilson Soares, and Waldomiro de Deus. The permanent collection, which was initiated in the early twentieth century with just twenty-six works of art, has today, in its holdings, fifteen works by Benedito José Tobias, twenty-eight by Valentim, three by Antonio Bandeira, thirty-seven by Otávio Araújo, and thirty-three by Emanuel Araújo –among others. According to Tadeu Chiarelli, in an interview with Cult magazine, the museum’s aim is to “gain a prominent role in the broader agenda of diversity in the arts in Brazil.” (2)

This aim is beyond noble, given that there have already been instances of an institutional inclination toward valuing diversity. I think, however, that the term “African descent” could be replaced by the term “African-Brazilian,” restituting an integral part of Brazil’s territory to these national artists.

Territórios: artistas afrodescendentes no acervo da Pinacoteca was on until June 13, 2016 at the Pinacoteca do Estado de São Paulo, Brazil

Alexandre Araújo Bispo is an anthropologist, independent curator and art critic, and  member of the editorial advisory board of O Menelick 2° Ato.