Artist Nina Chanel Abney launched her new augmented reality (AR) project Imaginary Friend on August 28, the 57th anniversary of the March on Washington, as Black Lives Matter held a protest in front of the Lincoln Memorial. From Harvey, Illinois, and now based in New York, Abney tabs into new terrain as she is known for her vibrant and humorous paintings. They are striking in size and poignant in their relevance and effortless-seeming mode of addressing politically controversial and emotional themes, from popular culture and race to gender and history. They are dense in references, joyful in color, and certainly challenging to think through.

Imaginary Friend is a manifest continuation of the artist’s previous artistic practice, precisely because she brings to life one of her own characters – from her 2019 set of relief prints Temporary Friends. Collaborating with Chris Chalk, Jeanette E. Toomer (Jet), and El Tsid to create the work’s music, script, and voice, this character appeared publicly in Chicago, the Grand Canyon, New York, Los Angeles, Washington DC, Paris, London, Berlin, and Tokyo. Through the Acute Art app a small version can be interacted with.

When I invited the “imaginary friend” into my smartphone and then into my living room, the sound of its voice and its ways of speaking, even the ambient sounds it carried with it, made me smile in comfort. I tried to remember the last time an artwork had such an uncontrolled immediate effect on me. It had been a while and now I reside with this friend.

I had the pleasure to ask Abney about her AR debut. After reading, you might also want to download the Acute Art app and let yourself be immersed into a shared world. 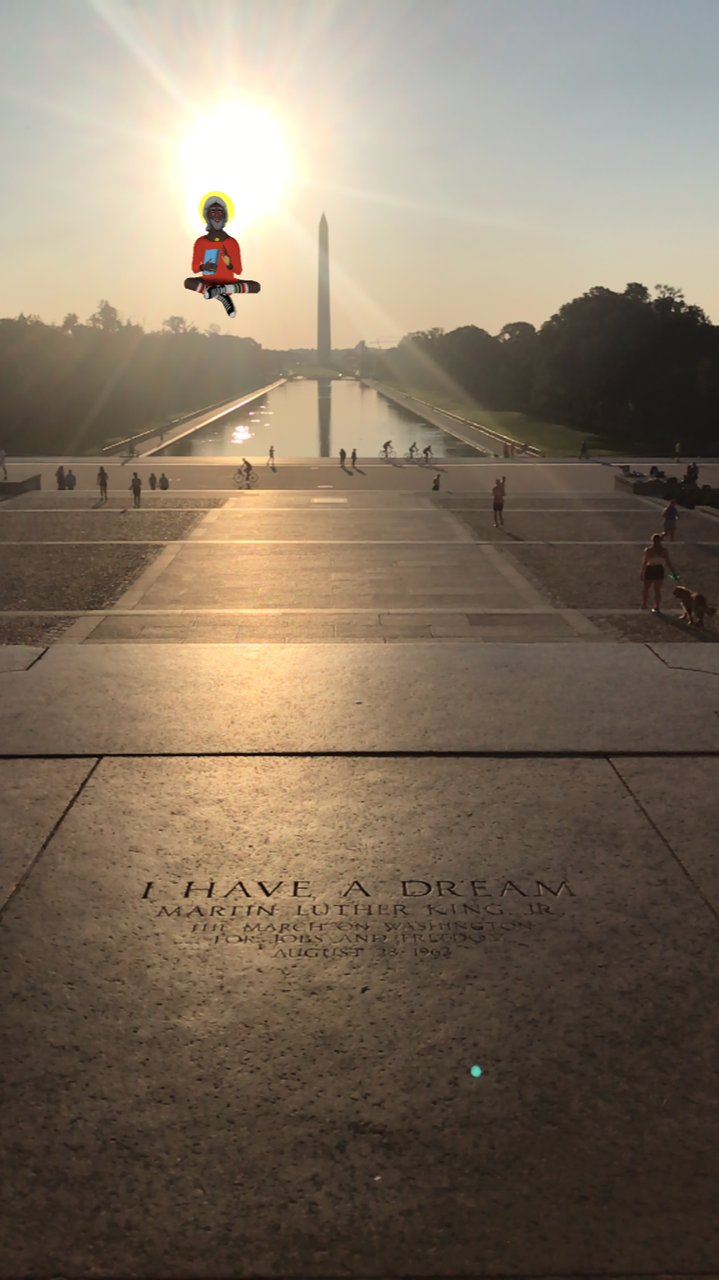 C&: How did you come to work with augmented reality? What thoughts and feelings do you have about the project now that is has been out there for a few weeks?

Nina Chanel Abney: During a studio visit with the artist KAWS, I was introduced to the Acute App. I thought it was an extremely cool and innovative project. From there, I was able to connect to Acute and we immediately started to ideate around the possibilities of what I could create. I am extremely pleased with how the project ultimately turned out. Over the last couple of years, I had been thinking about animation and formulating some ideas around how to bring the figures in my paintings to life. My project with Acute was a great way to finally explore these ideas. I think the project is very successful in the accessibility it has created.

C&: You created a companion that one can literally carry around and install in different environments, or see on public display in various cities around the world. This would not have been possible with other formats. Did the (im)materiality of AR (and VR) open up new imaginary spaces for you? How do you think it could change our experience of art for the future?

NCA: The (im)materiality of VR definitely opened up new imaginary spaces for me. I previously never thought about the voice of the characters I create, and I am now thinking more expansively about what it would be like if one could enter into my paintings.  What would an experience in that world be? It’s very exciting to imagine being able to not just look at a work of art, but to be able to live and be within it. In a time at which our in-person social interactions are limited due to the pandemic, I have been forced to think more about the future of art. And how we can continue to access it no matter the circumstances. The Acute App allows art to travel with you anywhere, any time. So VR may eventually have a more significant role in how we will experience art, especially if we continue to be affected by the pandemic or extreme weather due to climate change – anything that will limit our capacity to experience art in the real world. 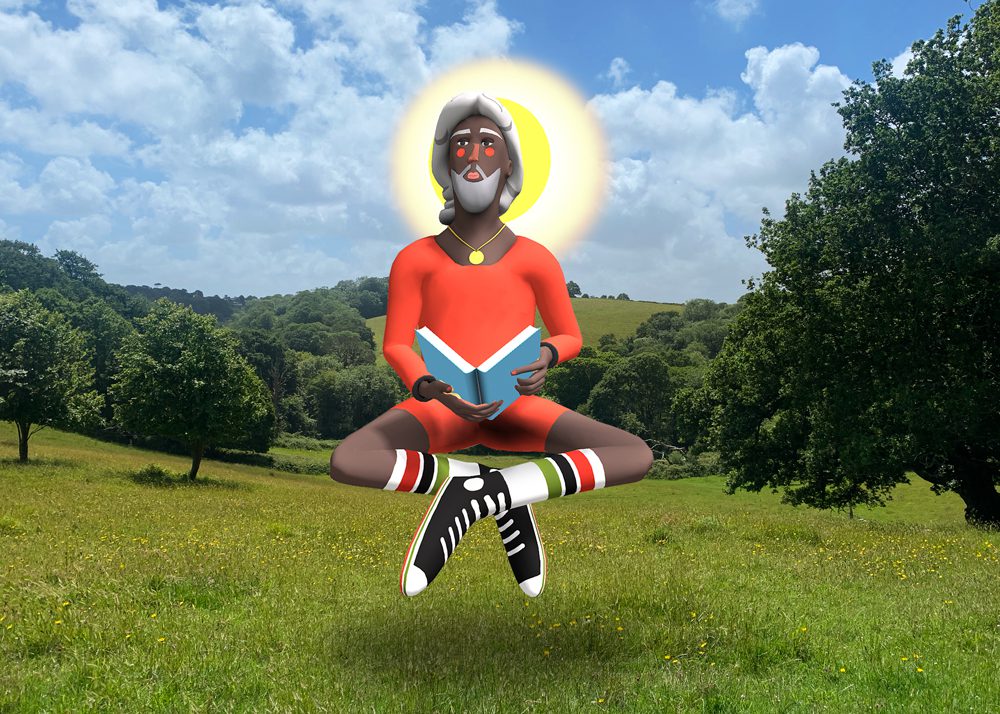 C&: Can you speak about the role of humor in your work? Especially in this project, which you have called “an offering to those in suffering”?.

NCA: I have always used humor in my work. It comes from my interest in satirical cartoons, and their ability to make sensitive topics more digestible. Laughter always helps me get through tough times. So I made a point of utilizing humor to ease the viewer into engaging with more serious topics that are typically difficult to initiate discussions around.

C&: Why did you chose this particular character for this project?

NCA: I chose my character from Temporary Friends because of its spiritual and biblical connotations. And for this project with Acute I had set out to create a modern-day sage, so it felt very fitting to use this character.

C&: Do you think you will you animate more characters in further projects?

NCA: It’s more than likely that I will animate more characters in the future. Or create new ones specifically for AR.

Here you can get the Acute Art app to dive into Nina Chanels Abney’s AR work Imaginary Friend.

Nelly Y. Pinkrah is a political activist and cultural and media theorist currently pursuing her PhD on Édouard Glissant and cybernetics in the research training group “Cultures of Critique” at Leuphana University.

How Germany is in Denial of its Historical Racism Today