Our author Magnus Rosengarten asks New York-based performance artist Jonathan Gonzalez: How can we form a creative perspective to react to the current status quo?

Renowned artists who have lived in the US for decades told us they are seriously considering not returning to the US as long as Donald Trump is in power. An influential curator from New York emailed us the day of the election, still completely in shock: “Winter in America. It’s certainly tough here. But folks feel ready to fight!“ We have received many similar statements by artists, curators, academics, writers – emotional, powerful, concerned reactions to the current status quo. In the new series “Don’t Mourn, Organize!” our question to them during the next couple of weeks and months will be: How can we form a creative perspective, how do we react by not solely concentrating on the uncertainties and crises but instead transforming ideas into platforms and strategies for change?

C&: James Hetfield, the frontman of Metallica, recently said in an interview that Trump’s election won’t change his continuing work: he doesn’t want to give this new government the power to influence his artistic efforts. What is your perspective on this in terms of your art? Will the election have an impact on your work?

Jonathan Gonzalez: I find it undeniable that Trump represents a clear demarcation, an iconic and absurd one at that, of the present global dissonance. There is a resurgence toward a regressive world order, toward a fiction of the “right,” and a proliferation of ideologies of anti-collectivism, anti-Blackness, anti-refugee, anti-women’s rights. The list continues, expanding and folding in on itself. That said, I have been preoccupied with the capacity of art practice to spill past these limits before this historic moment, and I will continue in this preoccupation. Prioritizing curiosity and collaboration to generate rhizomatic content is a radical engagement and can produce alternate narratives for what negotiations exist for an external “us.” There is a long lineage of artists from the diaspora doing this work, and I share this endeavor with them.

JG: The US is a vast country with brief instances of civil rebellion, and perhaps this political moment will mobilize in many episodes as the conditions fail its citizens. This has been the history of other empires. I think back to only a little over a week ago, during the Women’s March on Washington. It was without a doubt enlivening to see the palpable quantity of bodies gathering, to hear the demands for organizing across geographies through the words of Angela Davis, or to respond to Ashley Judd’s ardent call for “nasty women.” I cycle through footage of signs being held in the crowd claiming an end to white feminism, others naming Marsha P. Johnson and words of Audre Lorde.

C&: As a practicing performance artist, what role does your body play in your practice? What is your relationship to it? How will you employ it in this political climate?

JG: The body is an entry point for my investigations because I believe in its capacity to oscillate meaning and reference from the trappings of representation, to the soma, or material being. Therefore, performance is a frame that permits me to deal with legibility of the performer as they communicate with the witness, the apparatus, and theatrical elements. This notion of spillage, which originates from the discourses of fugitivity and Black subjectivity as cultural phenomena, is a popular thread of thought among my contemporaries and in academia. I find these to be generative sources for dealing with embodiment and composing the formal conditions of a work. Again, I will not employ any new working methods to counteract the present moment. Every work I produce is engaged in the political climate as I work through this time. 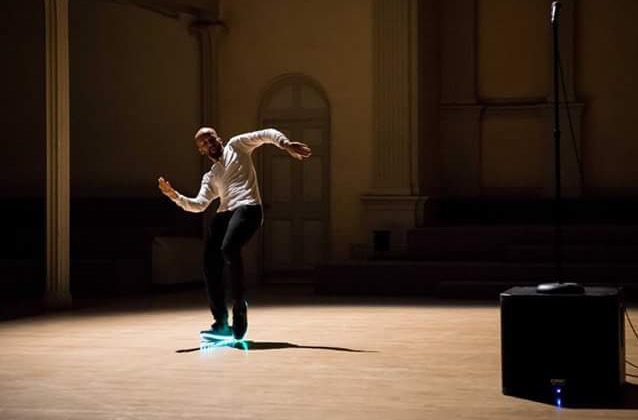 C&: Do you see any healing or curative potential in performance art or practices that involve the body as an immediate instrument?

JG: The curative potential of performance is perhaps subconsciously what keeps me in this practice. I understand the tradition of linking artmaking with the holistic or spiritual and how catharsis can be experienced through performing and bearing witness. I have felt those changes of state in myself by being inside and outside of a work. I also believe deeply in affect and the somatic, and in the blurring of art and culture in Africanist traditions, although I am not personally interested in designing a performance practice that cultivates a form of self-expression. I’m much more struck by the craft of multiplicity and contradiction that subverts singular narratives about subject and environment, a dramaturgy that approaches confluence rather than transcendence. Change may be present in the material, perhaps in the arc, but those signifiers of “healing” come from the viewer and are hopefully one interpretation of many. Framing the body, certainly the Black body, can be an invitation to dynamically reorient meaning, which the linear dialogue of healing does not rupture. I would locate myself within an oscillating participation of the performer through a more surrealistic timeline.

JG: How materials communicate alongside each other, with the audience, and the apparatus are important questions when I generate a work alongside collaborators. The choice to be in dialogue with chosen elements and the performative stake of the moment can pose an opening or a closure for the viewer, and that agency is interesting. Some works may call for an interactive relationship to the audience, breaking the divide at points, while other instances sustain the traditional setup of formally witnessing the material unfold. Either way, the audience is always considered from the initial stages of the process. It is this liveness of the audience component that makes performance the form I am working through; it is invigorating for the performer and, in that way, fragile.

C&: Where does sexuality enter your work? Does it play a role at all? What significance will the expression of sexuality assume in the coming four years?

C&: Do you want your work to have an impact beyond the art world?

JG: I want my work to be wrestled with, welcoming interpretations from any viewer from any walk of life. The size of its reverberation and impact is an abstraction that is not about the work; it comes afterwards. I want to offer an invitation.

Magnus Rosengarten is a filmmaker, journalist and writer from Germany. He lives in New York City and currently works towards his M.A. in Performance Studies at NYU