Pioneering artist, writer, curator, teacher and mentor David Kolane has passed away at his home in Johannesburg.

Born in 1938 in Alexandra, David Koloane was a pioneering artist, writer, curator, teacher and mentor to young and established artists at a time when such vocations were restricted to white people in South Africa. He moved with his family to Soweto just before he began high school. Koloane’s formative years were spent within the urban sprawl of Johannesburg’s two most central townships – Alexandra and Soweto. While the impression of these townships has never left Koloane’ s range of subject matter, his attachment to the figuration of urban life is far from simplistic. Rather, he attempted to represent both the tangible and intangible actualities of communal existence, and to capture transitory moments of the chaotic, uncertain, and volatile forces that drive a city such as Johannesburg.

Through his expressive, evocative and poetic artwork, Koloane interrogated the socio-political and existential human condition, using Johannesburg as his primary subject matter. Koloane’s representations of Johannesburg are populated with images of cityscapes, townships, street life, jazz musicians, traffic jams, migration, refugees, dogs, and birds among others. Imaginatively treated, through the medium of painting, drawing, assemblage, printmaking and mixed media, Koloane’s scenes are a blend of exuberant and sombre, discernible and opaque pictorial narratives.

A large part of this effort involved the initiatives Koloane helped establish, from the first Black Art Gallery in 1977, the Thupelo experimental workshop in 1985 and the Bag Factory Artists’ Studios in 1991, where he served as director for many years and worked until his dead. Koloane also tutored at the Federated Union of Black Artists (FUBA) in 1979 and became the head of the fine art section and gallery from 1985 to 1990. 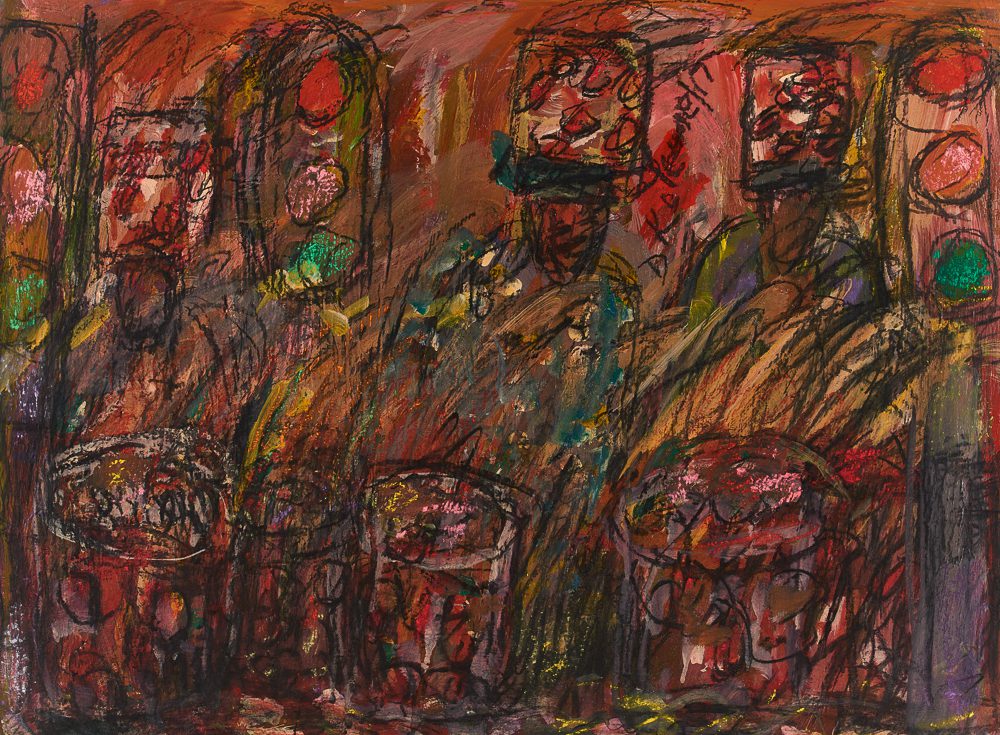 As a curator Koloane was involved in organising a number of historic exhibitions including the 1982 Culture and Resistance Arts Festival in Botswana, the 1990 Zabalaza Festival in London, and in 1995, the South African section of Seven Stories about Modern Art in Africa, in London. In 1988, Koloane was one of the delegates that extended the Triangle Network workshops to other African countries, by setting up the Pachipamwe workshop in Bulawayo, Zimbabwe. This workshop later gave birth to the Thapong workshop in Botswana in 1989.

Koloane’s work has been widely exhibited locally and internationally. In 1999 he was part of the group exhibition Liberated Voices at the National Museum of African Art in Washington DC. In 2013, Koloane’s work was shown on the South African pavilion at the 55th la Biennale di Venezia and on the group exhibition My Joburg at La Maison Rouge in Paris. In 1998, the government of the Netherlands honoured Koloane with the Prince Claus Fund Award for his contributions to South African art. Koloane was also awarded an Honorary Doctorate twice, once from Wits University in 2012, and again from Rhodes University in 2015.

In 1998 the government of the Netherlands honored Koloane with the Prince Claus Fund Award for his contribution to the development of the visual arts in South Africa.