Poku Cheremeh’s latest work is all about food. And it started out with a cracker-diet. The money saving methods of the twenty-five-year-old artist, whose works were shown during last year’s Dak’art Biennale, kicked off his investigation into organic materials. His installation Pokój was on view in the exhibition Afriques Capitales in Paris this year and now he is part of the first edition of the Lagos Biennial

Elsa Guily: Pokój is an installation made from organic materials designed to cultivate a relationship with others through food; the interior of this room refers to the inside of the body. Nourishing oneself by feeding on others as a means to structure one’s being is one of the underlying issues this work addresses to visitors—can you tell us something about the artistic process inherent to this work?

Poku Cheremeh: I work on the topic of the intimate. For Pokój, I developed a way of giving an account of an experience I had in the Netherlands, where I nourished myself with crackers for six months straight, to save money. So I papered this room with crackers stuck on the walls with burnt sugar. A sort of interior mosaic that is reproduced on the exterior with recycled paper made from cracker packages. The dark color of the caramel, which drips down on the cracker slabs, reminds me of an injury with an open wound. To make the chewing-gum table, I gave a packet of gum to some close friends and had them return all the chewed material to me at the end of a week. This process constitutes the memory of my work. The bed nearby is a worm compost containing real earthworms and the remains of fruit. I see it as a place where I have lain down to rest and dream, where things decompose in order to regenerate, like manure for new dreams and aspirations. Then comes the carambar caramel stool, which I called Son Or, a sonorous word play, tied in with a popular Ghanaian tale. A golden stool is supposed to have fallen from the sky to protect the Ashanti people from any malicious influences. In the colonial period, the British Queen wanted this stool and a woman rose up to protect it. Today it is in my room to bring some stability. The title of the installation is Pokój, a Polish word meaning both peace and room. I use this word to harmonize the whole thing and just to say that it is in this room that I found peace. 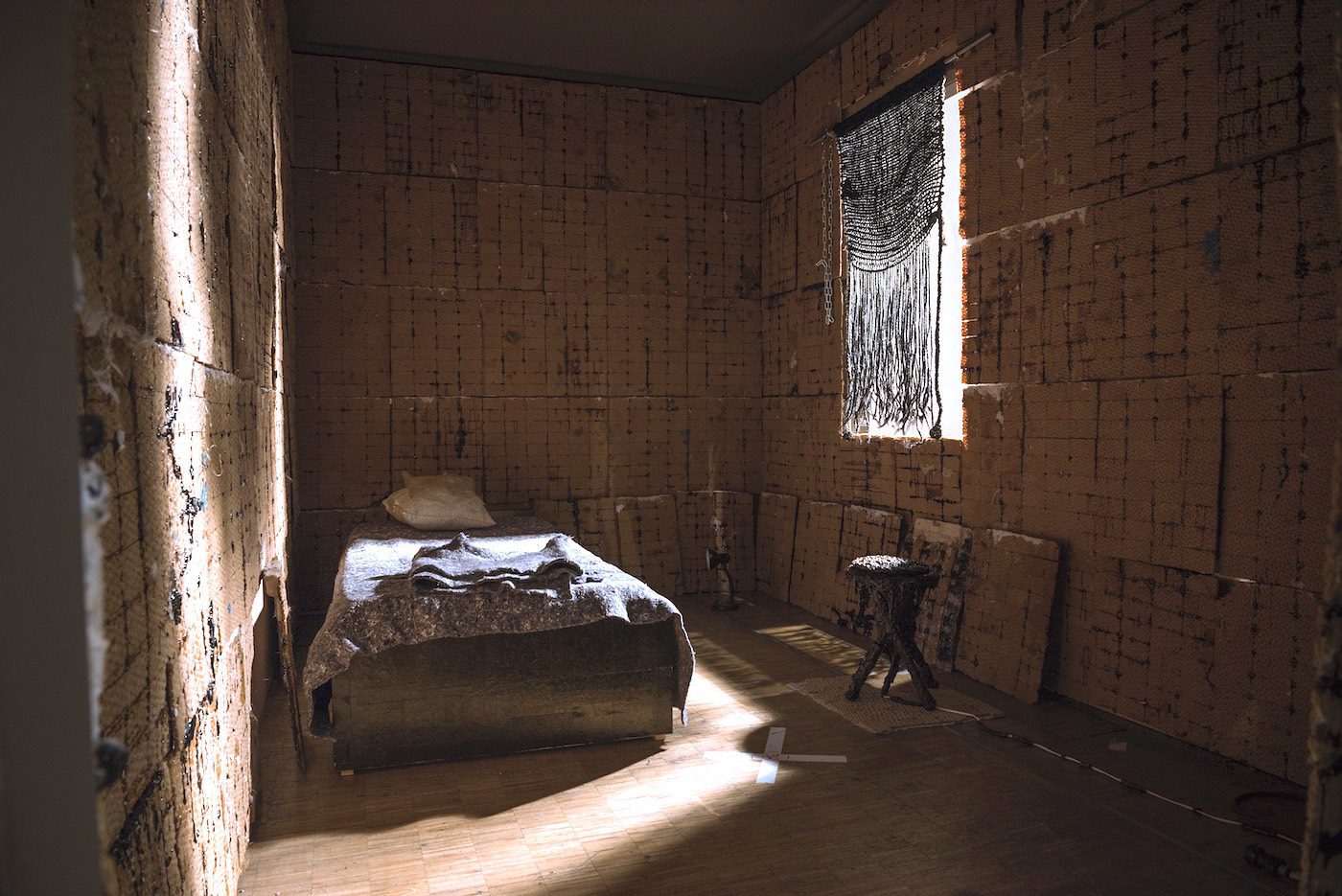 EG: How did each of the cultural environments in which you studied influence and determine your artistic practice?

PC: Being a professional artist never really appealed to me as such. I started doing visual arts at the international high school in Ghana. It was a way to shout what I couldn’t say. In my opinion, studying at college should help to develop my thinking and not direct me to a particular profession. I started out studying architecture in Boston in the USA: a compromise I made with my father’s values. For personal reasons I didn’t continue on this path and in order to pursue my studies I had to stand on my own two feet and develop a strategy to finance them. That’s the reason I headed to France, which still has a liberal welfare system and free university tuition. Entering art school was confirmation that it was legitimate for me to follow this artistic path.

EG: How do the English- and French-speaking realms coexist in your life? Is their coexistence what allowed you to forge a link between geographical locations, between the different cultures of West Africa and the diaspora?

PC: Speaking French allows me to build a bridge to embed myself or feel at ease moving from one culture to another. I went to a French primary school and then an international high school, where the main language was English. When I arrived in France at the Beaux-Arts de Paris, I wasn’t introduced to Afro-Francophone culture, which doesn’t exist within this institution. My early days in the school were pretty bleak. I have the impression that it was quite something for people to see a black person showing up at the Beaux-Arts! After spending a year studying in the USA, where African Americans were pretty well represented on campus, this introduction to a French institution was a real shock. As a foreigner, I felt excluded and was confronted with the task of integrating and assimilating into the culture. There are very few foreign students at the Beaux-Arts de Paris and we are made invisible. During my studies, the only connection I had with Africa was with a white South African woman who was at the college. In my third year I went to Rotterdam on a student exchange, which altered my perception of the art world and allowed me to gain some self-confidence. After a six-month exchange I had a better understanding of the Afro-Dutch than the Afro-French.

EG: Dak’art 2016 was your first experience of an international biennale. Can you tell us about this encounter with the contemporary art milieu in Africa?

PC: It was something of a fairy tale, dare I say! I was pretty overwhelmed by being completely taken care of as an artist participating in an exhibition. While I was at the Beaux-Arts in France, I had absolutely no awareness of what might be happening in Africa. Dak’art opened my eyes and I still appreciate the richness of this experience today—it allowed me to find my place and move forward. Meeting African artists at the biennale in Dakar helped me understand how art carries a socioeconomic and political weight. My meeting with Aïda Muluneh was something that shook me up. Part of this network is here in Paris, around the Afriques Capitales exhibition.

EG: You’ve been invited to participate in the first edition of the Lagos Biennial. What project do you have in mind for this next chapter in your career?

PC: I think that the Lagos Biennial is going to be something special! I’d like to go there with a team of friends from around the world. Many people are very drawn to Lagos’s cultural and economic vibrancy. Participation is an aspect of my work. My development is strongly influenced by people, and by the same token I contribute to their development. It’s a relationship of primordial exchange that is part of life. This event isn’t funded, so I’m in the process of looking for money to make it possible for this collaborative project to see the light of day.

Elsa Guily is art historian and an independent art critic living in Berlin, specialized in the relationships between art and politics.

“Living on the Edge”, the first edition of the Lagos Biennial of contemporary art will be held from the 14th October to 22nd November 2017 in six different venues across Nigeria’s metropolis.

The History of a “Colonial Ghost”

"Killing the Hierarchy Within You"