By virtue of its subject matter and the fact that it is being presented in a major institution the exhibition "Black Models: From Géricault to Matisse", represents a first for France. Taking place at the Musée d’Orsay, it addresses the importance of Black models in the creation of art by identifying them and renaming artworks accordingly, writes Dagara Dakin.

The product of a fruitful collaboration between France and the United States, the exhibition is based on the thesis that researcher Denise Murell defended at Columbia University in 2013. “Following on from the first leg of the exhibition at the Wallach Art Gallery, the Musée d’Orsay and Mémorial ACTe (Pointe à Pitre) continue this questioning of modernity looked at through the prism of the black model.”[1] However, in the French version of the show, the subject is set in a new temporal frame, with the Paris leg hinging on three key periods: the period of the abolition of slavery in France’s colonies (1794–1848),[2] the period of “New Painting” (Manet, Bazille, Degas, Cézanne), and the period of the first avant-garde movements of the twentieth century. The realization of the project represents an ambitious attempt to change people’s mindsets in what promises to be an immense undertaking.

The light focused on these models also illuminates the history of the black condition in the nineteenth century—a complex period, as Anne Lafont and David Bindman point out: “The paintings of Delacroix, Géricault, Manet, and Matisse … were chosen not only with the black model in mind but also because they capture a very particular slice of history, one that calls for a subtle and specific form of contextualization. Indeed, the nineteenth century is perhaps the most complex and least understood century in the history of the ‘race’—in the West and probably even more so in France. On the one hand, it was the glorious era in which slavery was abolished in all the countries of Europe and America, while, on the other, it was also the era in which science’s backing for racism was consolidated and flourished, manifesting in different forms that had immediate and long-term consequences of catastrophic proportions.”[3] The complexity of this historical context should have prompted the originators of the project to narrow their focus But this is not what happened, the downside of which is that it is more difficult for us to read their intention, introducing an element of confusion. We can easily get lost in amongst the studio models who were selected and sometimes remunerated for their work—as is the case with the famous Joseph—and public figures such as Alexandre Dumas or even Josephine Baker, etc. Not to mention the broad scope of the historical period covered, which involves other major events on top of the ones already alluded to. In addition to this, there is the abundance of media on display (paintings, photos, posters, videos, etc.). It’s a huge amount. 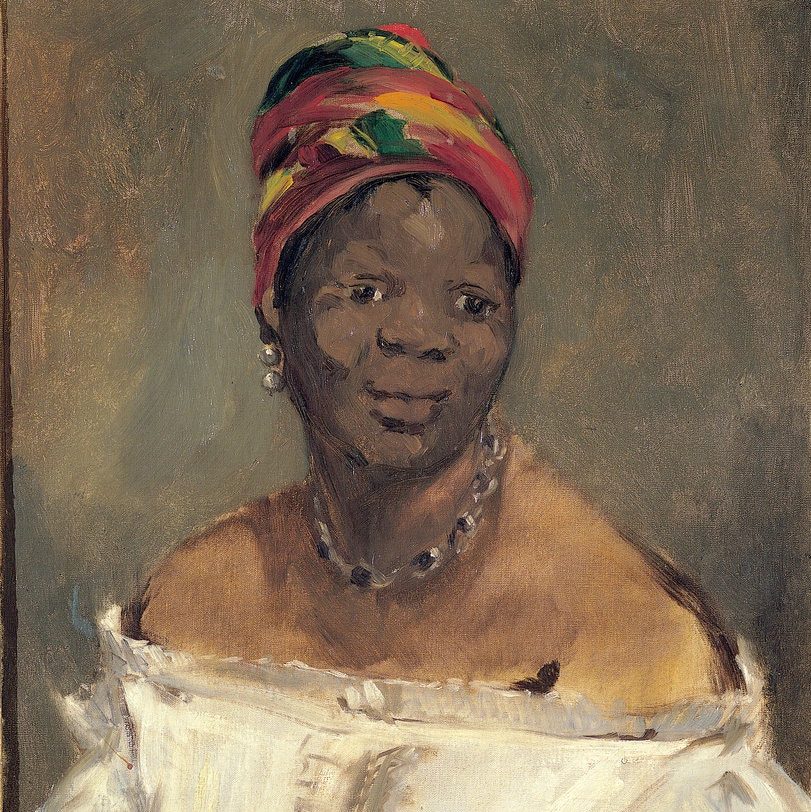 “A slave’s name is the first thing that gets stolen from him.”[4] Aimé Césaire

This confusion might almost lead us to forget one of the approaches orchestrated by the exhibition organizers that has a strong symbolic impact: namely, “recovering the identity of the studio models who have long remained anonymous and … spotlighting their history and experience.”[5] In this respect, the curators have done their utmost to identify the models, and although it has not been possible to name all of them, the fact that they have renamed the works while keeping the old titles is to be applauded. This committed stance, which focuses on rehabilitation—some might say “reparation”—is clearly stated by Anne Higonnet in the pages of the exhibition catalogue: “Wherever possible, let’s change an anonymous title into a name. Manet’s painting will no longer be The Negress but Portrait of Laure. Let’s focus our research on discovering these names, and if we can’t find them, let’s explain why? Let’s give a name to our lack of knowledge. Let’s be explicit in identifying the consequences of history.”[6]

It is on the basis of this rationale that the terms “black” and “negro/negress” have been replaced either by the first names that have been unearthed or by other terms that do not essentialize the individuals represented.

Thus, Marie-Guillemine Benoist’s famous oil on canvas, which at the time was titled Portrait of a Negress and dated 1800, has been changed to Portrait of Madeleine. Although often only first names could be found, it should be noted that this approach humanizes the model, whose previous anonymity reduced the person simply to his or her functional role. Some might point out that a first name doesn’t have the same value as a surname. But, in historical terms, this lack of a name is loaded with significance, and the fact that it has been possible to locate the names of these models can only accentuate the impact of this narrative. 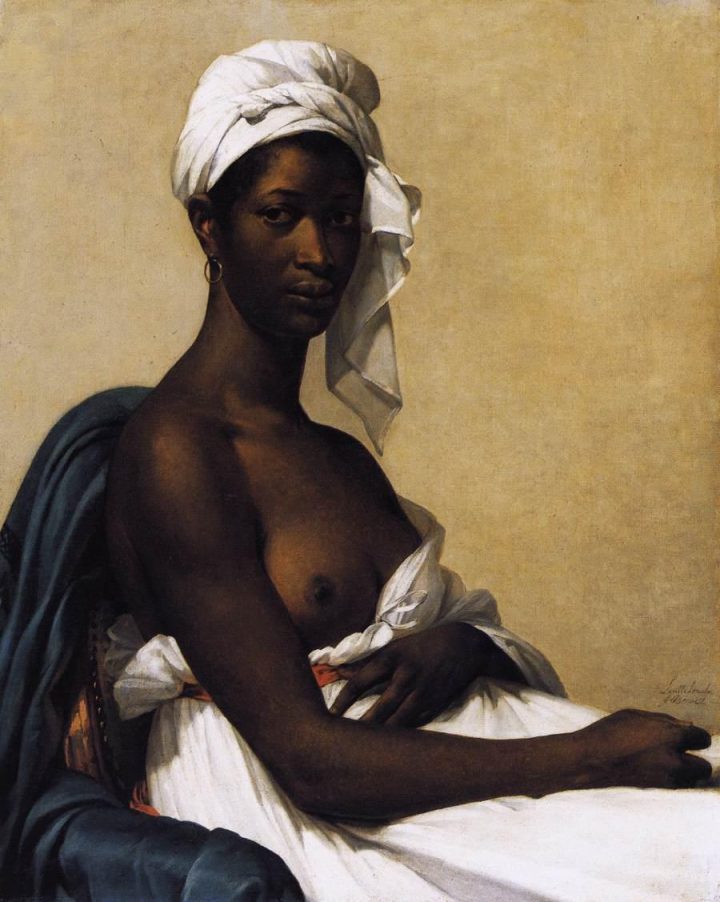 Since its opening last March, the exhibition has for the most part received rather favorable reviews. But some voices struck a different tone, expressing opinions that were discordant—cutting even—such as those of political commentator Françoise Vergès. She makes specific mention of her sense of disappointment: “In other words, there was the opportunity for a more incisive exhibition in 2019, more openly challenging the racial assumptions of French society” (See “Corps noirs, vie muette: Quand le modèle noir masque l’histoire de la fabrication du blanc,” published on the Documentations website.) There can be no doubt that this exhibition is far from perfect, and these voices provide a counterpoint to the general atmosphere of enthusiasm and encourage moderation. Nevertheless, the fact remains that this project initiates a discussion, opening the way for other ideas and proposals in future. In any case, we hope so.

One should also stress the importance of the fact that this subject is being presented at the Musée d’Orsay—a museum and institution whose research focus does not fall within the field of either ethnology or anthropology but is rather centered on art history. Should we take this as a sign of a watershed moment? That remains to be seen.

Aside from that, as the curators are keen to point out, “Black Models: From Géricault to Matisse finally does justice to the other actor in the historical dialogue we are exploring, the women and men, the majority of them from Africa or the West Indies, to whom certain artists have given a face, an inner life, and a sense of vitality and individuality that represent a complete departure, more or less, from the codes of an agreed or negative negritude.”[7]

Black Models: From Géricault to Matisse, is at Musée D’Orsay, Paris, France, until 19 July 2019.

Dagara Dakin is a freelance writer and curator based in Paris.

[2] Initially abolished in 1794, slavery and the slave trade were re-established by Napoleon I in 1802, before being abolished for good in 1848.

How Germany is in Denial of its Historical Racism Today

A Readymade World in the Heart of the Country