Athi Mongezeleli Joja takes a closer look at the intimate as well as political context of the Mancoba family.

When I tried to tell him that there also was geometry in African art, he shook his head and went away –

Ernest Mancoba was born in Johannesburg in 1904. In 1938 he left South Africa on account of the violent, exploitative and dehumanizing nature of the British colonial enterprise as it was directed against black people. At that time, Paris was the mecca of artistic creation and African art had discursive, albeit curious currency in art circles; it was those discussions that intrigued the young Ernest. Through a friend, he met and later married the Danish artist Sonia Ferlov (born in 1911). Together they had one son, Wonga, born in 1946.

Try to imagine, in late 1940s war-torn Europe – not only in ruins but also replete with archaic forms of colonialism and racism – the figure of Sonia illuminated by a dim beam of light as she signs a letter to a friend or relative with the initials EWS. This is how she is reported to have signed all of her letters: Ernest, Wonga and Sonia Mancoba. Picture her recipients’ faces, full of annoyance and shame. There’s something symbolically subversive and admirable about the acronym. It is both a biographical as well a political sign. Its affirmativeness is combative. But there is always the inherent paradigmatic bias that protected the defiant Sonia from terror – a systemic reproduction of violence Ernest, as a black man, could never take flight from, irrespective of his demeanor.

Just a few decades prior to Ernest’s arrival there, the body of Sarah Baartman of the Khoi people was paraded around Paris in freak shows as a specimen of a scandalous species. Ernest entered the gates of a Europe on the cusp of yet another war and was not met with ululations but with cries of “Nigger, Nigger go to hell. English, English ring the bell.” Frantz Fanon reports of a similar incident, when a white Parisian child looked at him and trembled, thinking he was a beast. As Edward Said has pointed out, this is typical of exile–: a condition of being out of place and a perpetual suspect.   In 1943, Ernest was thrown into a Nazi internment jail for four years. It did not end there; he also faced the baneful cruelty of exclusion and humiliation even from his fellow cultural practitioners.  Yet Ernest’s perceptivity extends beyond the banality of such oppression and the sterility of the art world. At the same time, he was a towering intellectual of his era. Back home he mentored and hung around figures such as Govan Mbeki, I.B. Tabata and Nimrod Ndebele. He was of the calibre of Aimé  Césaire, Cheikh Anta Diop, C.L.R. James and his countryman Gerald Sekoto.

After Hand in Hand, curated by Elza Miles, and  In the Name of All Humanity, curated by Bridget Thompson, Stevenson Gallery, in collaboration with Galerie Mikael Andersen,  presented a selected body of Ernest Mancoba’s work entitled EWS. It was only in 1994, after decades of exile, that Ernest Mancoba went back to South Africa – a moment poignantly captured in the documentary film Ernest Mancoba At Home by Bridget Thompson. Between a black-walled room and the main space hang Wonga’s rather youthful and urban images, screaming ‘street art’ with an abstract element. Though we might read his work as a reconciliation between generations, i.e., his time and that of his folks, Wonga’s work appeared flat, deflated and lifeless. Curatorially speaking, his work looked a bit smothered, recklessly and forcibly squeezed in between that of his parents. 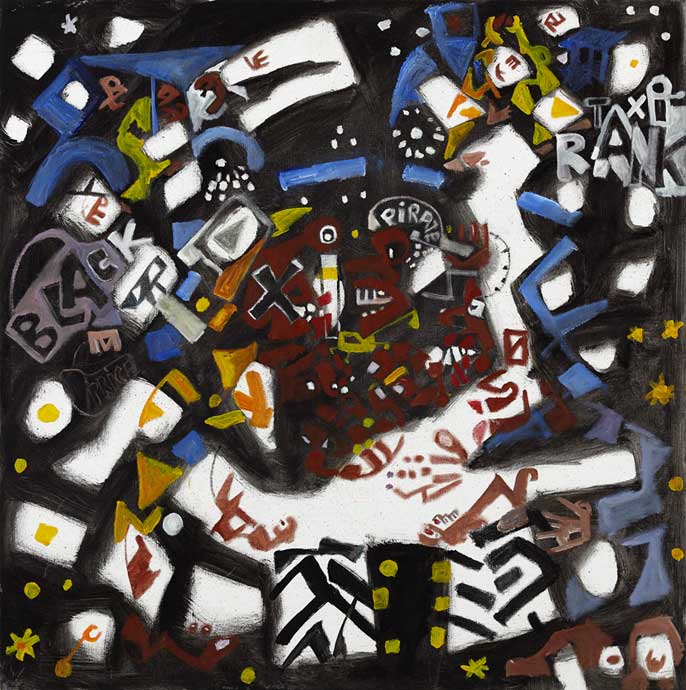 Ernest and Sonia’s works were displayed in two rooms opposite each other. They are pioneers of their generation – and that’s a mixed blessing for Wonga! The black-walled room contained three untitled paintings by Ernest and a small bronze sculpture, centrally positioned, by Sonia, titled Small mask with rib (1975). The main space stretched lengthily in a rectangular shape and Ernest’s images extended along the white wall forming a u-shape. In the middle, the rest of Sonia’s bronze sculptures sit atop plinths. Following Hand in Hand, which showed Sonia and Ernest’s work together for the first time in South Africa, EWS brought the couple’s output back to the public with the added bonus of their son who completes their immediate family.

Steeped in African art-influenced avant-garde movements, Sonia’s sculptures complement Ernest’s works aesthetically and amicably. Their visual language with its discursive centralization of the human figure suggests layers of commonality and compatibility with Ernest’s creations. Sonia’s anthropomorphized objects have both a sense of movement and of stillness. Although they are fashioned out of hard bronze, they appear to have a kind of softness. They pressure us to ask questions like: what is it to ‘be’? What and who is human in so-called humanity? 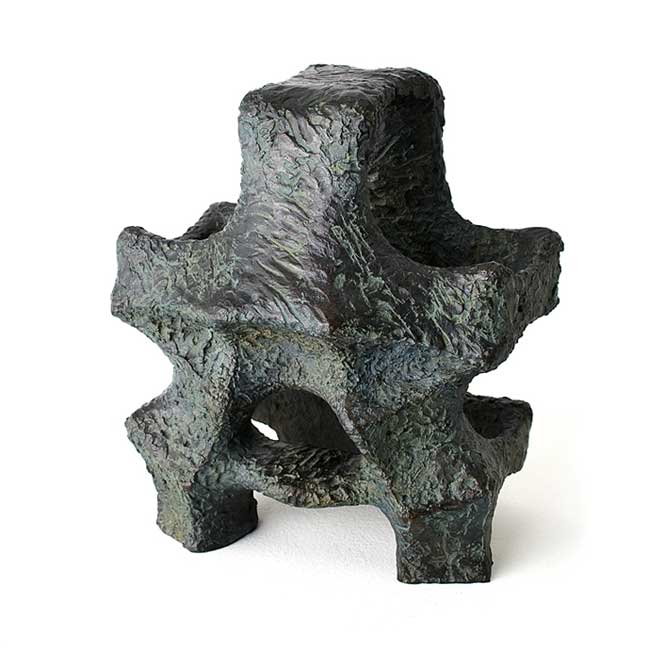 Ernest’s work, with its visual depth and symbolism, is a depository of African spiritualism and cultural heritage. Taken with all its visual components, it speaks from a distinct, yet undermined paradigm and orientation of African expressions and form. Its vocabulary strategically domesticates rather than replicates occidental subjectivity. Ernest not only goes beyond Picasso’s problematic formalistic appropriation of African forms, but also transcends the limitations of modern African art’s recycling of Western modalities. The frame of reference of his oeuvre is Africa. Many consider him to have solved the African modernists’ dilemma. Minimalist and abstractive, but also simplistic, from colour to composition, Ernest’s works resemble studies more than final products. His palette of ochre and earth colours, his central figure of the Kota reliquary or the pictographic marks that make up his language, attest to this apprenticeship in the African situation. Yet Mancoba asserts that his methodology isn’t averse to what he casually calls ‘an almost Freudian approach’. His is both an open and a closed process. It is no wonder that the work of Ernest Mancoba has not only received great veneration from some post-colonial art historians and theorists, it has also typified, so to speak, an apotheosis of what is meant by African modernism. At the same time, he was also an enigma for cultural practitioners and intellectuals as his work pushes us to an unfamiliar frame.

Rasheed Araeen once warned that we should not be surprised by the mainstream exclusion and negation of Mancoba and his achievements in the global canon of art and its pedagogic strategies. After all, the world with all its pretensions of ‘tolerance’ and ‘multiplicity’ has not paradigmatically shifted from its foundational positions of hegemony – and this includes the art world.

Though EWS presented itself as a perspective on the intimate context of the Mancoba family, it was also an account of the politics of art. But without any prior knowledge of the artists’ work, the audience was at a high risk of dismissing this oeuvre. The curatorial strategy, however commercial the space is, should have been much more attentive to this complexity. Nevertheless, EWS was an opportunity to encounter one of Africa’s great innovators and gifts to the world. The story and art of Ernest Mancoba, together with his lifetime partner and comrade Sonia Ferlov and son Wonga, spoke to the heart of technologies of cruelty and the violence of the world.

Athi Mongezeleli Joja is an art critic, writer and researcher. He is also a member of the arts collective Gugulective. His writings have appeared in numerous publications and exhibition catalogues including Savvy, Chimurenga and The Feminist Wire. He is an assistant editor of the publication New Frank Talk: Critical Essays on the Black Condition.