Elisia Nghidishange in her studio, Courtesy of StArt Art Gallery.

Nestled among the vast expanse of artworks at this year’s virtual RMB Turbine Art Fair (RMB TAF) is a rich and varied exhibition of works by three Namibian artists – Elisia Nghidishange, Nicky Marais, and Fillipus Sheehama. Curated by StArt Art Gallery, the first independent Namibian gallery to participate in this South African art fair, the exhibition speaks of the ways in which various power dynamics play out in our current cultural landscape.

I have been following StArt Art since their inception in 2017, enamoured by the work of the artists they represent and their support of Namibian artists abroad and at home. Finding Power, their exhibition at RMB TAF, testifies to the sensitivity and tenacity of some of those artists. 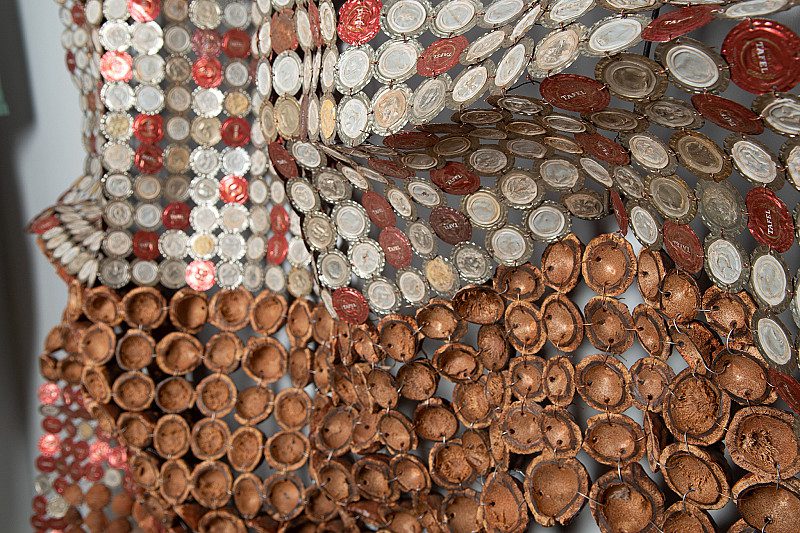 Fillipus Sheehama’s creations hover between textile and sculpture, painstakingly woven together from found materials like bottle tops, makalani pith nuts, and animal bone. Aptly named, pieces like Collapsing Identity and Organised Fault hint at the task of stitching together a society ravaged by European colonization and South African apartheid. Nicky Marais’ paintings seem to sing out a certain vibrancy, her familiar patterns holding some secret message of suffering, consistency, and hope. A delicate beast of a painting, Ten Thousand Crosses evokes the untold acts of violence committed against the Namibian peoples. And Elisia Nghidishange’s imposing sculptures capture with incredible effectiveness the simultaneous exhaustion and resilience that resides within the female body.

The grandeur and detail of Nghidishange’s sculptures really come to life in a video of the artist at work in her studio. In this video, while Nghidishange reflects on the silence in her workspace and what it means to find one’s voice, we catch a quick glimpse of work entitled Reclaimed Freedom of Speech 1, 2, and 3. These sculptures’ three faces, almost resembling skulls, strike me with particular force. Each has a kind of molten obstruction covering the mouth – an obstruction, or a powerful pronunciation, burning like coal? I’m not sure, but these three faces with their smothered mouths, as well as the hovering gaps in Nghidishange’s sculpture Dress of Power, remind me of the traumatic history of the relationship between South Africa and Namibia, a history that largely goes unaddressed.

Most folks, even many South Africans, are not aware that South Africa essentially colonized Namibia when it was “given” to South Africa after Germany lost its colonies in the First World War. Between 1920 and 1990, South Africa’s National Party controlled the Namibian economy and administration, inflicting apartheid laws on its neighbouring country. Globally, the word “apartheid” seems to belong to South Africa. Very few of us realize that it also belongs to Namibia – that the trauma of its history exists in the Namibian collective consciousness, too. South Africa’s historical monopoly and ongoing presence in Namibia continues today, with the Namibian dollar still linked to the South African rand and the names of Namibian freedom fighters still missing from anti-apartheid narratives in South Africa.

Slowing down to sit longer with the artwork, digging just slightly deeper into history, I feel the ripple effects of the haunting silences that long-established systems of white supremacy have created in entire cultural identities. At the same time, however, I detect a glowing sense of resistance, of reclaiming power and an insistence on transformation, embedded in Namibian art and the broader cultural narrative that these artists are creating.

Nicola van Straaten is a freelance artist/dancer and writer/researcher, who was born in Durban and is currently based in Berlin. She is co-founding director of the independent arts organization, ANY BODY ZINE.

In Conversation with Kabelo Malatsie

“Rise and Fall of Apartheid" at the International Center for Photography

What does South Africa mean to Manhattan?

Conference: Between hesitation and rage