How an Art Collective Determines its Modes of Production

The Kinshasa based collective Vi.To shares a common practice and an understanding of contemporary art in their local context.

In 2016, Alexandre Kyungu introduced me to his collective Vi.To – an abbreviation for Vision Totale (Total Vision) – that he, Hilaire Balu Kuyangiko and Gaël Maski Kusa Kusa founded in DRC’s capital shortly after their graduation. Vi.To, self-proclaimed union of these three artists, is innovating in the field of visual art, acting against the tide of expectations by drawing from the rich creative resources and realities that Kinshasa offers. With no specific mandate or outreach program, they seek to infuse their works with all the social concerns and realities that characterise their direct environment. Collectives have formed and existed in the history of contemporary art for a long time, but they also carry out a vital socio-cultural function. Most art collectives in Kinshasa mean to empower their members, working under a common vision and impulse.

Back in 2016 the members of Vi.To. told me how their introduction to international contemporary art practices – through self-documentation or workshops – had been the impetus to reflect further on a practice in their own context. “It was a shock to discover contemporary art, which appeared as a sort of follow-up of what we had”, says Gaël Maski, reflecting on the abruptness of such a discovery. Being part of a collective has been an emancipative gesture in reaction to a rigid art education for many in Kinshasa. Naturally, birds of a feather flock together. 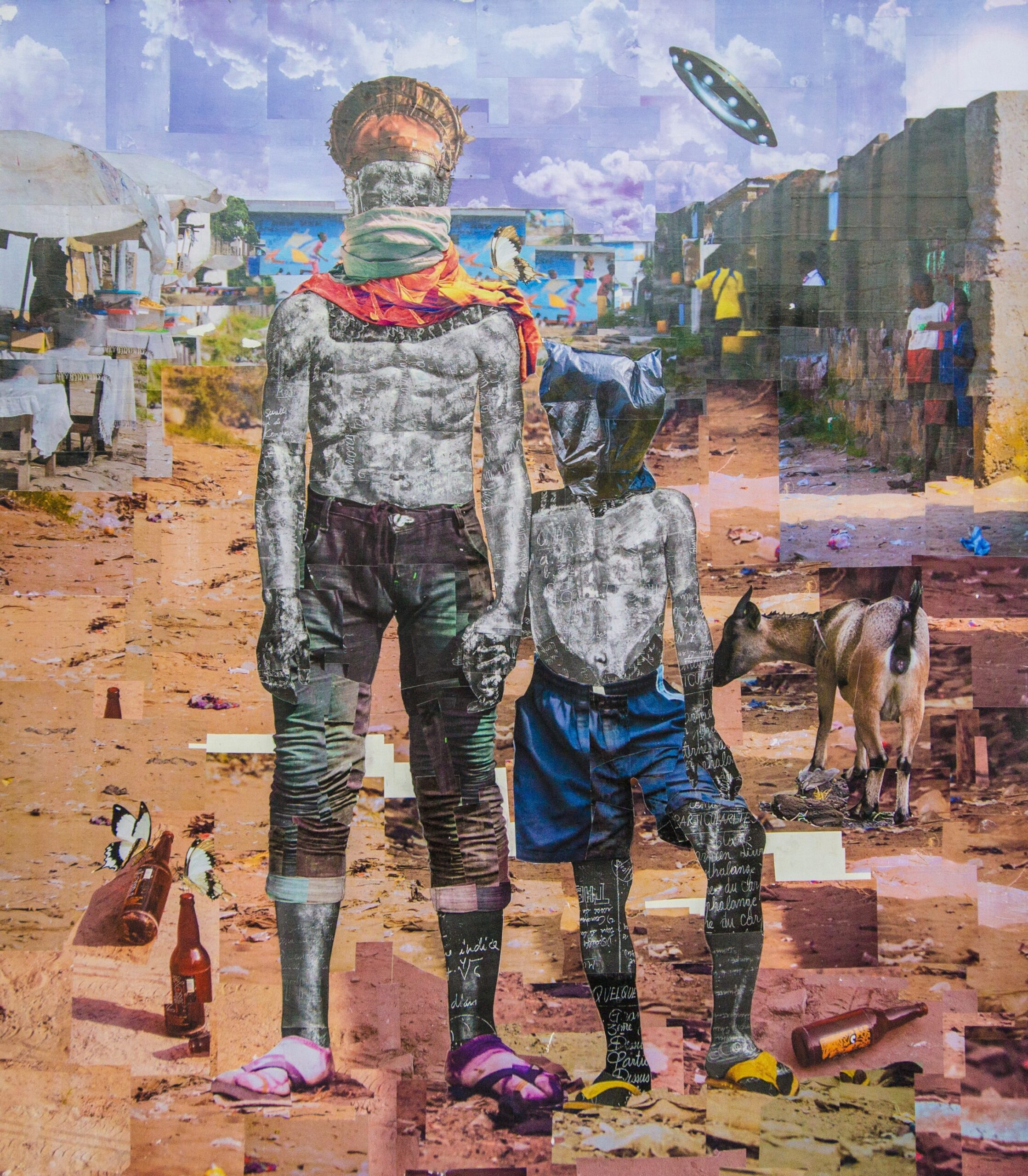 The three artists of Vi.To are especially concerned with their practice’s legacy, a collective and collaborative idea that shall be very tangible one day. They want to “create something that will benefit coming generations, something that is addressed to the public, the local population”, Alexandre Kyungu had said in 2016. Gaël also stressed the importance to reach a Kinshasa-based audience: “how can we reach them?” It seems necessary to find channels to popularize or rather root visual art practices into the informative and cultural lines of Kinshasa’s urban fabric so that visual art does not stay a vague idea instilled by ‘colonial dis-acculturation’. Part of the motivation to establish Vi.To was to grasp and define the relevance and legitimacy of their work at a community level.

“The population should be bound by any ideology that comes from its culture” insists Gaël Maski. In his recent body of work, Hilaire Balu Kyungu also makes a visual diagnosis of our consciousnesses, that strive to anchor despite the waves of imperial and destabilizing ‘éblouissements’. He points to the problem that our imagination has been colonized. As a collective Vi.To. addresses this diagnosis and makes it a key concern in their philosophy – through visual compositions.

Imperialism in a post-colonial era has much to do with the severe imprints left by hegemonic globalized and consuming societies. Vi.To. has been adamant that the colonization of our imaginaries has to be addressed and subverted. Their creation had less to do with the establishment of an art group or the drawing up of a creative manifesto than with collective enabling, with the conviction that visual art, if practiced collectively, critically and rigorously, can help raise local and African voices in the strive for cultural change and social justice.

Vision Totale’s leitmotiv is engagement, whatever the challenges, obstacles and setbacks they are confronted with. Their engagement is sustained by their strong will to work and establish themselves as artists. Their faith in such achievement is a binding one. However, individuals sometimes neglect the fact that collectivism is a prerequisite if visual art practices are to have a real and consequential community relevance and impact. Their personal aspirations are inextricably tied to the idea and belief that their art and practice encourage change in the socio-cultural and political status quo in which their countries live.

Alexandre Kyungu prefers the notion of contemporary vision instead of contemporary art. More than three years after our initial conversation, a common vision seems to have taken over Kinshasa and the DRC’s visual art scene and begins to establish among the art community and local cultural actors. As a case in point, recent events such as La Biennale de Lubumbashi VI – Future Genealogies Tales From the Equatorial Line, the first edition of the (Young) Congo Biennale entitled Transition, the KINACT Performance Festival or the upcoming second edition of Yango Biennale are willing to collaborate with all the active artists, actors and forces in the field to set the foundations for new approaches, visions and methodologies of art-making, outreach and appreciation. Alexandre Kyungu firmly believes in: “creating something while ideology is spreading everywhere – to organize conferences, meetings and dialogues between each other and to bring more artists/creatives to the visual side of things, of reality”.

Aware and convinced of the social and critical dimension of contemporary art, Vi.To’s respective work carries a message or a call for cultural reassessment and renewal. If there is a greater collaborative mission in the field of visual arts, it certainly relates to the contemporary notions of African reviviscence, self-definition and mythological/imaginary uprising. The collective’s vision shows an uncompromising will to question, unveil and re-imagine our human global condition and its socio-cultural rootedness. “We should question ourselves as people creating a new world in which the tensions we experience today should not exist” says Gaël. In a time when global and socio-economic realities are entangled with the research and new formations of African cultural benchmarks, the ability to relate to a collective mind spirit is essential.

Jean-Sylvain Tshilumba Mukendi is an independent researcher, writer and art practitioner. In 2019, he obtained a Master of Art in Art History as part of the Arts of Africa and Global Souths research programme (NRF) at Rhodes University, South Africa. His research interests focus on contemporary visual culture and art practices of Africa, creative responses to cultural hegemony, and the relevance of globalism in the contemporary art world.

What Collective Remembrance Is For