Athi Mongezeleli Joja talks with the artist about her artistic practice.

It’s mid-spring and Cape Town’s sulky weather has relented, revealing a blistering sun. I am drowning in my own sweat and clumsily fidgeting with my notes put together at Njideka Akunyili’s group show opening the night before, titled Kings County. “Njideka Akunyili’s body of work is a palimpsest of tributes to African artistic and cultural practices across generations,” the statement reads. Njideka arrives on time, a tallish somebody in a laid-back outfit of a t-shirt and jeans. We putter about in a semi-formal repartee and unintentionally wind up at the beginning.

“I came to art late in my life, actually. And it’s not like I never did art – I always drew. Not painted, I always drew.” Unlike the usual stories, Njideka recounts that she didn’t “consider the possibility of art as something serious” until she moved to the United States at age 16 before graduating with a double major in Biology and Fine Arts at Swarthmore College. Her face beams when she mentions her undergraduate school – the generous teachers who patiently nurtured her. “I think through them I saw the possibility of what art can be and do in a way I had never thought of or seen before.  .  . as something critical.”

Almost immediately she acknowledges that this story could be seen in a negative light. “It’s not like there weren’t serious artists in Nigeria. I was just not aware of them. And maybe the mechanism of exposure wasn’t there as much as it is now.” Like the experience of most youth in developing and post-independence African states, Njideka describes her early view of African art as expectedly “narrow.” It was exposure to curio. “I was like, ‘Is that what you really want to do with your life?’” she chuckles. What was passed as African art were objects denigrated and reproduced as ornaments without any credible link to the domain of art.

Despite this oddity, Njideka reckons that the “cultural renaissance” currently sweeping through West Africa and throughout the continent, from music to literature and art, has foisted a different and assertive presence of African cultural life onto the global stage. “It was this energy I could feel. I wanted to be part of this,” she says. So, straddling the “explosion” and the formidable cultural legacy of African and diasporic productions, Njideka’s work draws its visual voice most obviously from literature. She refers to Nigeria’s notable literary superstars Chinua Achebe and Chimamanda Ngozi Adichie as “the top two people I love.” Her pieces’ titles, such as The Beautyful Ones series, Nyado: The Thing Around Her Neck, and others, are suggestive of this connection with literature. 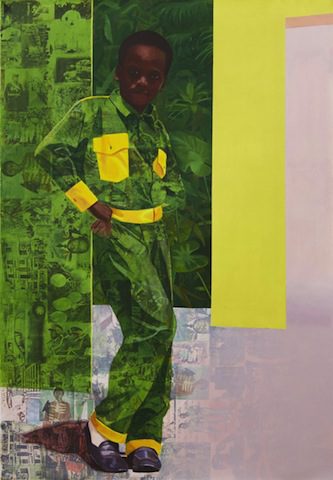 Influenced by the Achebe’s famous declaration that English must be made “to carry the weight of my African experience,” Njideka concedes that this impulse “encapsulates what I want to do with painting.  .  . to make it bear the burden of this other experience.” However, for Njideka this “burdening” is not a reproduction of the often problematic and easily circulated images of African experiences. This is how her work distinguishes itself, by portraying less routinized representations that are intimate, as they’re also autobiographical. She invites the viewer into often silent private and personal spaces like her bedroom in moments captured very candidly. Although these glimpses are inviting, both the size and implied realism of the work can be off-putting, as the viewer can easily slip into feeling like an intruder or voyeur.

Less apparent than literature is the influence photography plays in her work. And the idea of “the ordinary” is an element of African photography that has made a mark on her body of work. This heavy influence of photography isn’t just visible in the pervasive use of picture clippings in her paintings, but also in more specific features like compositional structure and iconography that tends to dominate such a medium. These are carefully considered aesthetic identifications. “Actually most of the artists I love are photographers,” she says. We can see the subtle influences of great photographers like Seydou Keita and Malick Sidibé of Mali in her compositions and iconography. She also praises the work of South African photographer Nontsikelelo Veleko. Thinking of photography’s role in both Mali’s and South Africa’s post-independence period in relation to herself and the dominant cultural energy taking over the West African region, she says:

“I think I have always been excited about this energy and change. I’ve wanted to put my finger on it. But how do you put your finger on the pulse of a city – a cosmopolitan African city! So many African photographers do it well. If you look at Sidibé, you get a sense of excitement of Mali post-independence.  .  . There is a change and you sense it in the pictures. Or look at Nontsikelelo Veleko – the attitude of the youth and the place.”

Placing this cultural reawakening in the context of cumulative forms of social alienation and dread that abound in Nigerian society, the celebratory fervor could just be a subterfuge that peddles “national progress” only to blind us to new modes of capitalist and neocolonial accumulation. But for Njideka this step, with all its inherent limitations, has added an exciting dynamic that reverberates across the continent.

Athi Mongezeleli Joja is an art critic, writer and researcher. He is also a member of the arts collective Gugulective. His writings have appeared in numerous publications and exhibition catalogues including Savvy, Chimurenga and The Feminist Wire. He is an assistant editor of the publication New Frank Talk: Critical Essays on the Black Condition.