Artists like Vincent Desiderio or Ron Mueck are famous for their exploration of intimate scenarios. Kanye West’s provocative video “Famous” resembles their approach. And yet, he manages to leave the viewer strangely unattached.

Kanye West is a master of sampling. Along with his creative virtuosity and long-ranging love affair with controversy, it’s one of the many factors that have contributed to his notoriety as a performer and recording artist. But it should also come as no secret that he applies similar methods of creative production to his visual art, which began long before he was a notable producer and emcee.

Last year’s Famous video, a disturbing meditation on our obsession with celebrity culture, brought the artist a whole new level of disrepute, building on years of momentum in which he has both criticized fame while also benefitting from it.

The video is inspired by American realism artist Vincent Desiderio’s 2008 painting Sleep, a colossal oil masterpiece that stretches eight feet high and twenty-four feet long. In the painting, nude people sleep peacefully, draped loosely in luxurious cloth and pillows, seemingly unaware of each other or the idea of being watched by an audience. 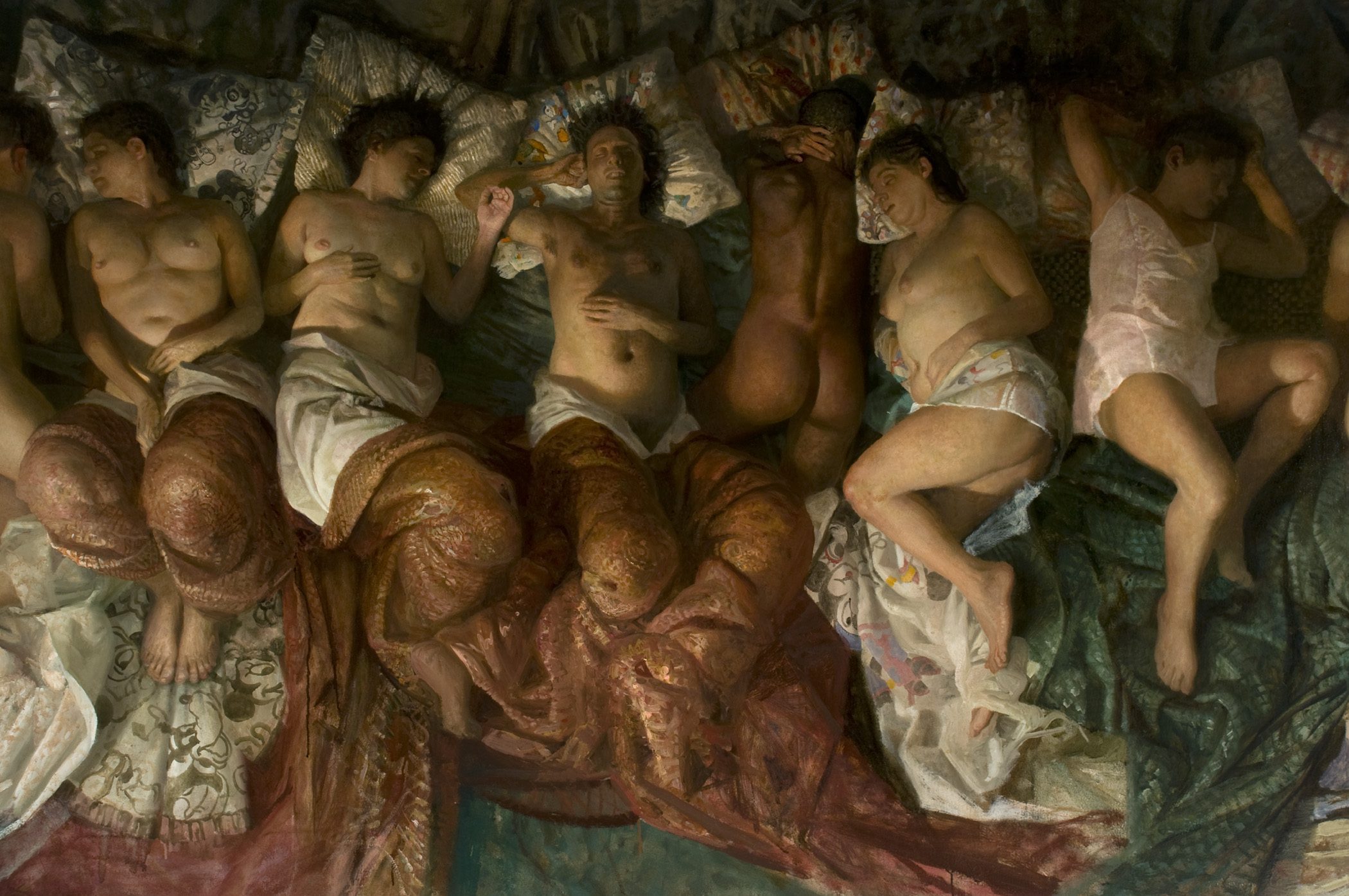 Desiderio calls West’s music video “a conversation” with the original. West applies concepts of voyeurism, vulnerability and reciprocity to his interpretation of the painting in a world far removed from Desiderio’s original.

The music video lacks Desiderio’s shadowy softness, and subdued figure blocking. Where Desiderio keeps his audience at a distance, West draws them in. In fact, West’s approach to the hyperrealistic wax sculptures in his music video is more akin to the stunning, hyperrealistic works of London-based sculptor Ron Mueck, than Desiderio’s painting.

Mueck has been sculpting human figures that both invite and disenchant his audience for decades – an objective that West achieves conclusively in his video. West doesn’t play with scale; his figures are life-sized. But he employs similar details as Mueck, right down to the shading of the tattoo on Rihanna’s chest. And he adds another dimension of meaning that is absent from Mueck’s sculptures: fame is in itself a hyperrealistic experience, one that doesn’t make psychological sense to the human condition. Just as one never expects to walk into a room and find a five-meter tall sculpture of a boy kneeling in the corner, the idea that one would willingly open up all the most private aspects of ones life to international scrutiny is also counter-intuitive.

So, the music video accomplishes something that Desiderio’s painting does not. By presenting us with the likenesses of celebrities, it articulates a long held but oft unspoken truth – that fame requires fandom. The music video, like celebrity culture itself, is nothing without its audience to gaze upon it, both saluting and indicting the public’s role in promoting the very phenomenon that is so often the subject of their derision. 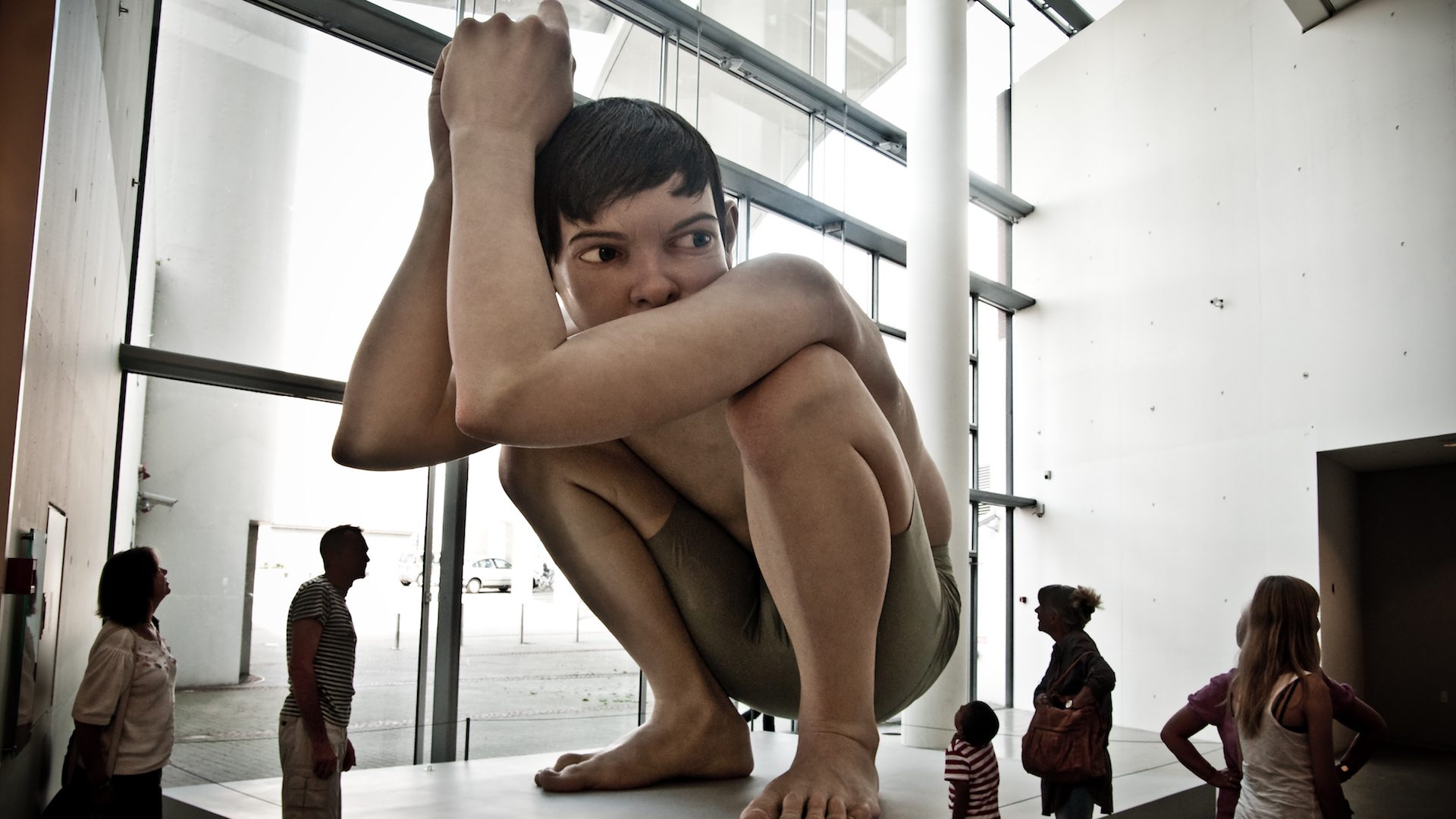 Despite the highly-detailed nudity of this music video, sexuality is notably divorced from it – replaced instead with a disturbing Mueck-esque hyperrealism meant to jar its audience from the familiar comfort zone from which they so often judge celebrities, forcing them to confront the faces and bodies of people with whom we are completely unfamiliar on any meaningful level.

West takes Desiderio’s original to a new level, one with an outreach unavailable to a contemporary artist, using his access to popular culture to breathe life and context into the painter’s original masterpiece.

The problem lies in the methods and objectives between the two. In an interview with NPR, Desiderio spoke openly about removing emotional attachment between himself and his painted characters. This enabled him to treat them as “sleeping idiots” whom he silently encouraged to wake up to the state of affairs going on around them in today’s world. But in the process of creating the painting, he began to “fall in love with them” instead, which insinuates at least some level of empathy.

Famous depicts only well-known celebrities, such as Kim Kardashian [his wife] Amber Rose [his ex-lover] Ray J [his wife’s ex-lover] George W. Bush [the subject of his most notable political critique] and Taylor Swift [his…whatever.] And it cannot be denied that there is something deeply personal about the music video. The grainy up-close footage that sweeps over their bodies takes tremendous agency with these characters in a way that implies deeply personal knowledge, or at least familiarity.  But as the near ten-minute video proceeds, the viewer becomes numb to what they are viewing instead, looking upon the bodies as one might look upon an inanimate object – a similar range of emotions as with Mueck and Desiderio, but with the opposite trajectory.

West, who has been highly critical of celebrity exploitation in the past, returns the favor by exploiting himself and others – owning the lens through which we view him and his constituents, by becoming the arbiter of the very practice he scorns.

And while Desiderio’s work acts like an observation, West places himself right in the middle of his tableau, making him the axis around which fame, and more specifically the fame of his fellow sleepers, revolves. It’s a feature that’s both self-aggrandizing and highly characteristic of West’s personality – making it a familiar, albeit more creative reiteration of stunts he has pulled in the past.

West is openly courting fame while openly disparaging it – and much like the psychic command of Mueck’s work, it’s the tension between the two mindsets that make the piece function…though they make strange bedfellows indeed.

Jennifer Neal is a journalist and writer based in Berlin, where she is writing her first novel. Her interests lie in race, gender, politics and fine art.

Kehinde Wiley on the Flat Screen