C& talks to artist Karo Akpokiere about his dedication to graphic design, crossing borders, and how he divides his time between Lagos and Berlin.

C&: Did art and creativity feature prominently in your childhood?

Karo Akpokiere: I drew a lot growing up, and, thanks to my parents, I was exposed to a diverse range of books that helped feed the drawing interest and my capacity to dream.

KA: I had access to different kinds of picture books as well as comic books. There were also historical comic books mostly about WWI and WWII. Comic books with fictional narratives that had a more everyday setting and superhero comics were part of my reading. All in all, there was just lots of drawing, reading and watching TV. Growing up in Lagos in the eighties was really interesting, as there was a well-balanced combination of great local content and foreign content in the media. This balance provided me with a healthy appreciation for different cultures as well as my own. One wasn’t necessarily better than the other. The graphic design, the books, pattern designs, the cartoons etc. played a major role in the formation my visual identity and in my having a sense of what art is and what it can be used for – much more so than visits to art galleries and institutions.

C&: How did you decide to become an artist?

KA: I first went on to study sciences, but after a while I realized that art was my vocation. That’s when I decided to figure out how to get into art school. In this transition phase I was building up my portfolio. I also had a huge fascination for shoe design, aspiring to work in this field. Therefore I was drawing every day from dawn till dusk. Basically this desire helped me to get into art school and to develop a certain dedication to drawing and graphic design. While in art school, I was given a book from my parents. It was a book on T-shirt design called “100% Cotton: T-Shirt Graphics” featuring designers as well as artists who used T-shirt design to convey certain messages of a personal, humorous, and political nature. I spent time researching all of the artists featured in the book. In the process, I came across painters making shoes and graphic designers making furniture etc. This had a huge impact on me as I realized that I could work across any medium, across any borders. Prior to that time I was fixated on just making shoes, so the book helped broaden my vision. 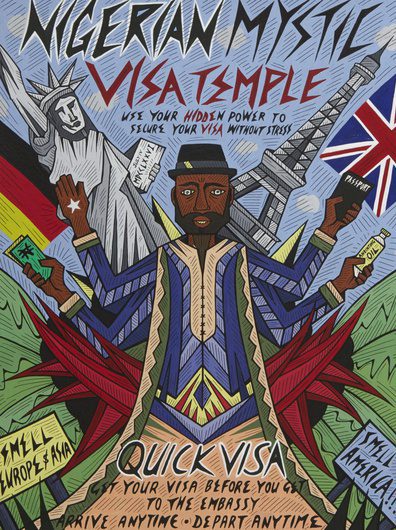 C&: Would you define yourself as a graphic designer?

KA: Yes, being that I studied graphic design. Yes, because it makes it easy for me to explain my work sometimes. Sometimes it’s about practical considerations during conversations and keeping things moving. I am, however, more concerned with paying attention to the things that interest me deeply and creating from a place of interest than I am with titles and how titles affect the way my work is perceived. I am concerned with doing whatever it is I want to do. I am not fazed when I am addressed as a graphic designer because of my understanding of what graphic design can be used for beyond its association with commercial activity. Graphic design represents life in ways that fuse reality and fiction albeit in an everyday life context, and it exists a lot in the public space where visibility and accessibility isn’t much of an issue. It can be commercial or non-commercial, political or apolitical without pretence. Paying attention to graphic design offers insights into the prevalent thoughts in a particular space at a particular point of time. It offers a way to engage with a city and with it you get a sense of what makes a city tick.

C&: As you’ve been living between Lagos and Berlin since 2013, what have you seen in terms of graphic design in both contexts?

KA: I think there are more differences than similarities between Lagos and Berlin. For instance, if you focus on the content of the graphic design here in Berlin, you see a city that is fascinated by arts and culture. There is also a visible presence of politically orientated graphics. Back home in Lagos, you are mainly confronted with graphic design translating religious practices and beliefs. I see graphic art as always being context-based. 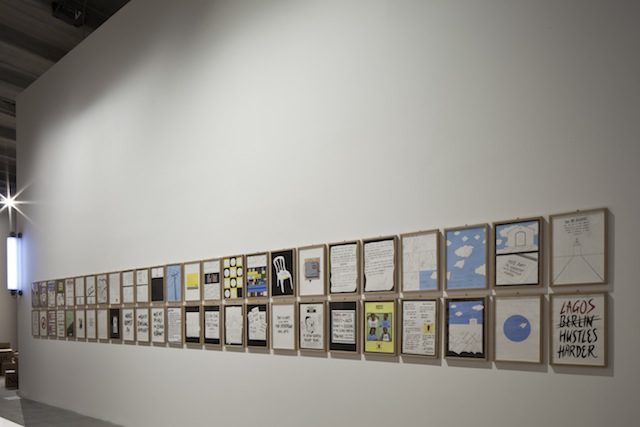 C&: You’re participating in this year’s 56th Venice Biennale and one of your pieces shown there is quite striking, especially if one is aware of the Berlin context. It is called “Wer hat das Haus von 28 Türen verbrannt?” (Who burned down the House of 28 doors?), referring to the migration art project that was burned down last March in Berlin. Tell us a bit more about it.

KA: Back in June 2014, I stumbled upon a pro immigration protest at Oranienplatz in Berlin-Kreuzberg. Until that point I had no idea about immigration issues in Germany. I saw the banners reading, “You can’t evict a movement”, “No borders, no nations”, “Stop deportation”. After a short while at the protest, listening to the speeches, I had a fair understanding of what was going on and became curious about what was happening here in Berlin. Nobody talks about the refugee situation in Lagos, as if it was a well-guarded secret. This is not the Germany that is being presented to the rest of the world. I was shocked when I learned more about the asylum seekers and their situation. I met people like Paula Bulling, who is politically active and produced the graphic novel “Im Land der Frühaufsteher”, talking about the situation in Halle. A conversation with one of the refugees made me aware of the significance of “The House of 28 doors” which I saw when I went to Oranienplatz in December 2014 to be part of a protest that unfortunately didn’t hold. This installation served as a memorial to the refugees who had lost their lives trying to get to Europe, a constant reminder of the inequalities in mobility and the growing anti-immigration sentiment in Europe. When I found out that it had been burned down, it was really shocking to me, especially in terms of what it represented. Until today, the arsonist(s) have not been apprehended and probably never will be as the authorities seem to have little interest in finding them. I wanted to keep the conversation about the memorial going and I felt the Venice Biennale presented me with the opportunity to do so as it receives a lot of visitors not only from Germany but the whole of Europe and the rest of the world. I considered various ways to approach the drawing and finally decided that a simple, text-based approach would be appropriate as it presented the question in the most direct manner possible. 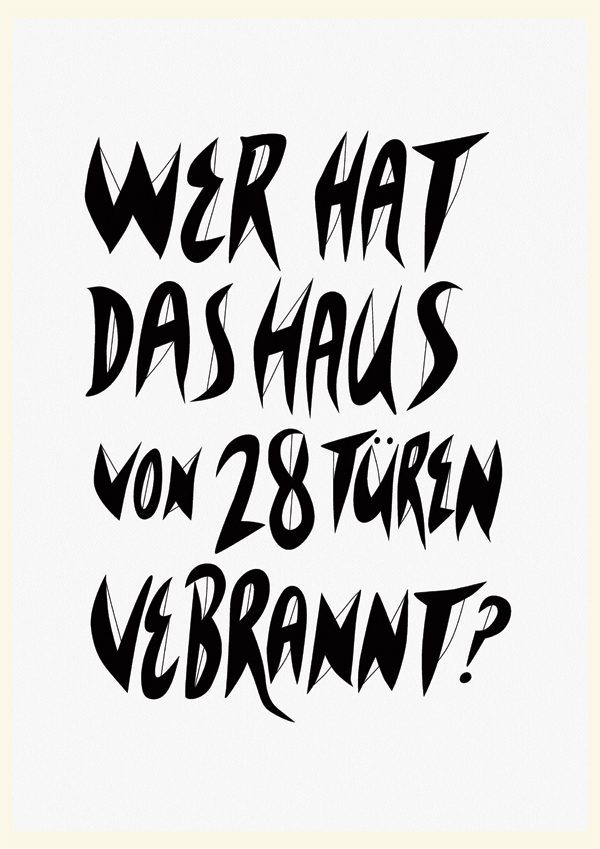 C&: Finally, can you please name three of your favorite artists and tell us why you like them?

KA: One example is Javier Mariscal. His work spans a wide range of media. For instance, he made a really popular animated movie: “Chico & Rita”. It is a love story set in 1950s’ Cuba. With graphic design you have the sense that anything is possible. I’m also drawn to the artist Friedensreich Hundertwasser, also because of the interdisciplinary nature if his work. He was able to move from one discipline to the other without any restrictions. I am fascinated by Keith Haring’s desire to make his work accessible and visible beyond art world circles and how he used his work to express social, political, and personal views. With all of these artists, the element of ‘play’ is a part of their work, and the value of collaboration. I’ve named these artists because of their ability to bring together different elements of life, i.e. politics, fashion, love, commerce in ways that are personal to them.