The Congolese photographer, painter, and film producer Kiripi Katembo (aka Kiripi Katembo Siku) died last week at age 36 of cerebral malaria in Kinshasa, Democratic Republic of the Congo, according to the Fondation Cartier pour l’art contemporain.

Born in 1979 in Goma, Katembo studied at the Académie des Beaux-Arts in Kinshasa. He is known best for his 2009 series, Un regard, which consists of images captured in the reflections of water puddles of the Congolese capital. The influential body of work connects with and updates a long tradition of mirroring in photography we saw earlier this year in Paris with an exhibition of Florence Henri, Mirror of the Avant-Garde (1927–1940). Some of Kiripi Katembo’s photograph prints are currently on view in Paris at curator André Magnin’s huge exhibition of Congolese art, Beauté Congo – 1926–2015, at Fondation Cartier. 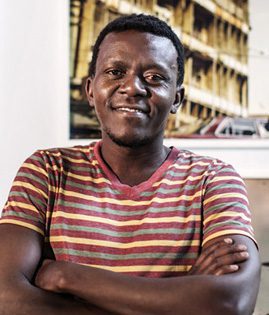 Describing his Un regard series, the artist once explained:

Photography also provides a way of seeing beyond reflection as it opens up a poetic window on another world, the world in which I live. I want each image to tell of the children born here who have to grow up surrounded by pools of water, and of the families who survive while others leave to live in exile. To me, this is one way of campaigning for a healthier environment and to denounce through images what Kinshasa’s inhabitants see as fate.

In Kiripi Katembo’s photographs and short films, he documented the daily life of the inhabitants of Kinshasa and the unstable political and economic situation facing his country.

His work has been featured at the Venice Biennale, the Berlinale, Bamako Encounters, the Royal Museum of Tervuren (Brussels), the Centre for Fine Arts (Brussels), TAZ in Ostend (Belgium), the Rencontres d’Arles, and the Avignon Festival for which he designed the poster for the 67th edition in 2013.

His films have been shown at film festivals in Berlin, Toronto, IDFA, and Carthage, Tunisia. The seven-minute digital film, Cardboard Car Film (2008), made with a mobile phone camera, takes us through the vigorous streets of his beloved metropolis of over 10 million people. Katembo was also founding director of the film company Mutotu Productions and the executive director of the Yango Biennale in Kinshasa. He was also the founder of Yebela, an art collective for Kinshasaian artists.

This text was originally featured Hyperallergic, a forum for radical perspectives on art and culture in the world today.