Light in Times of Growing Uncertainty

The touring exhibition Lumières d’Afrique stops off in Johannesburg amid a global pandemic and widespread uncertainty. Looking at the complex subject of development in Africa – including access to energy – the show presents a critical commentary on the present while prompting thoughts on building inclusive futures.

The Standard Bank Gallery in Johannesburg is eerily deserted when I tour Lumières d’Afriques in April. My virtual viewing takes place during the Covid-19 pandemic and while I am in South Africa, where – as in many other countries – a strict lockdown has been imposed to lower the spread of the deadly virus. As the pandemic magnifies and exacerbates inequality, mounting calls for radical changes to policies and power structures increases the urgency of the issues with which the exhibition is engaged.

Themed “The Light of Africa,” Lumieres d’Afriques features fifty-four artists, one from each of the continent’s countries, and comprises painting, installation, photography, tapestry, and assemblage. Its artistic direction is led by French curator Jean-Michel Champault and a steering committee of people from multiple sectors and countries. According to its website, Lumieres d’Afriques aims to reflect on issues around development and access to energy on the continent.

The current moment of catastrophe – in which “a crisis for fossil-fuel commodities” and increased food shortages triggered by the pandemic, as well as intensified state violence are some of the many issues continuing to raise alarm  – urges an updated reading of the artworks and the environments surrounding them. 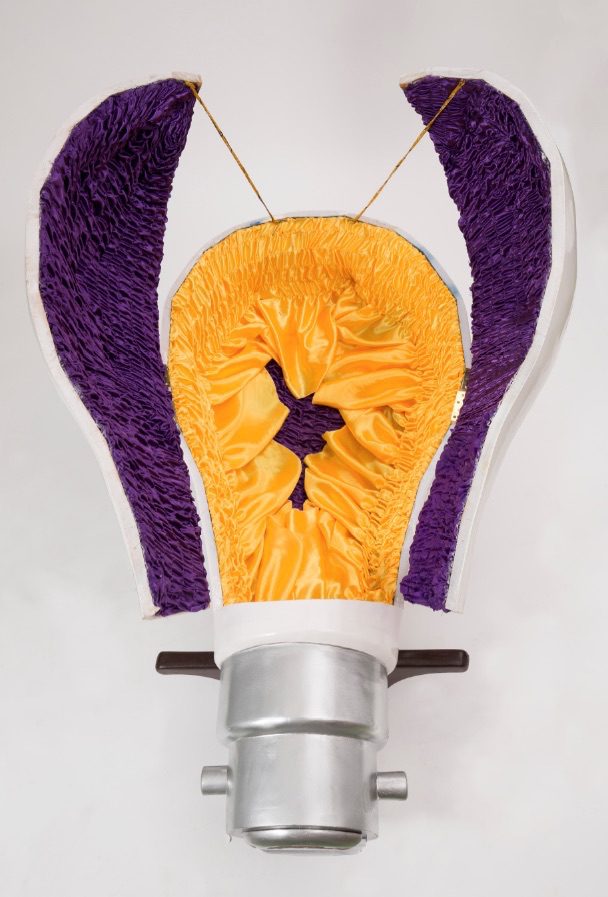 Among the artworks in the gallery, I come across the recurrent image of a lightbulb – a common symbol for electricity and an arguably obvious reflection of the theme. However, close readings of some of the works complicate notions on energy. Paa Joe’s sculpture Electric Bulb (2015) resembles a casket with lid wide open to reveal a purple-and-yellow satin lining, and forms the shape of a lightbulb. The structure is in the tradition of a fantasy coffin, or abebuu adekai, used to bury the dead by certain communities in Ghana and a part of the wider visual cultural landscape. Electric Bulb reads as a metaphor of widespread mourning during the pandemic, while linking energy to death or even darkness. 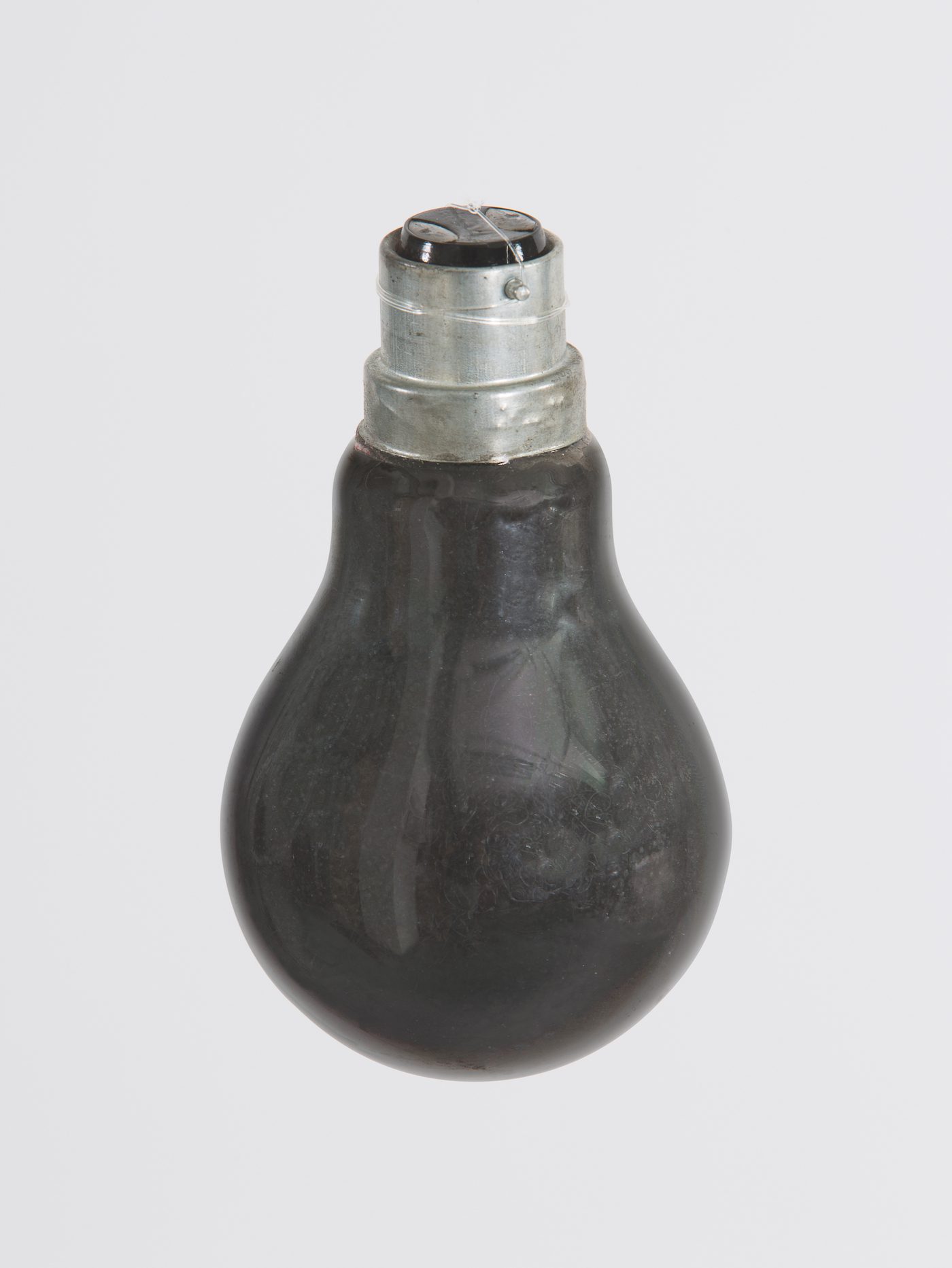 Amplifying the tensions emitted by Electric Bulb is BlackLight – WhiteCoal (2015) by Doung Anwar Jahangeer: a single incandescent lightbulb mounted on the gallery wall. The ash-coloured bulb, its lightness in contrast to darkness, has numerous resonances, stands as a paradoxical representation on a continent where energy shortages means that millions of people do not have access to electricity. (In a video, Nolan Oswald Dennis also discusses their artwork in Lumieres d’Afriques in terms of its exploration of the “relationship between light and dark.”) In a video clip placed alongside BlackLight – WhiteCoal, Jahangeer speaks about energy as double-edged: it “enables us to grow and develop” but it is “a resource that also dehumanizes us.” Jahangeer’s work points both to electricity’s value in providing meaningful living standards and to exploitative practices surrounding natural resources such as coal, a fossil fuel that brings harm to the environment and those who mine it. 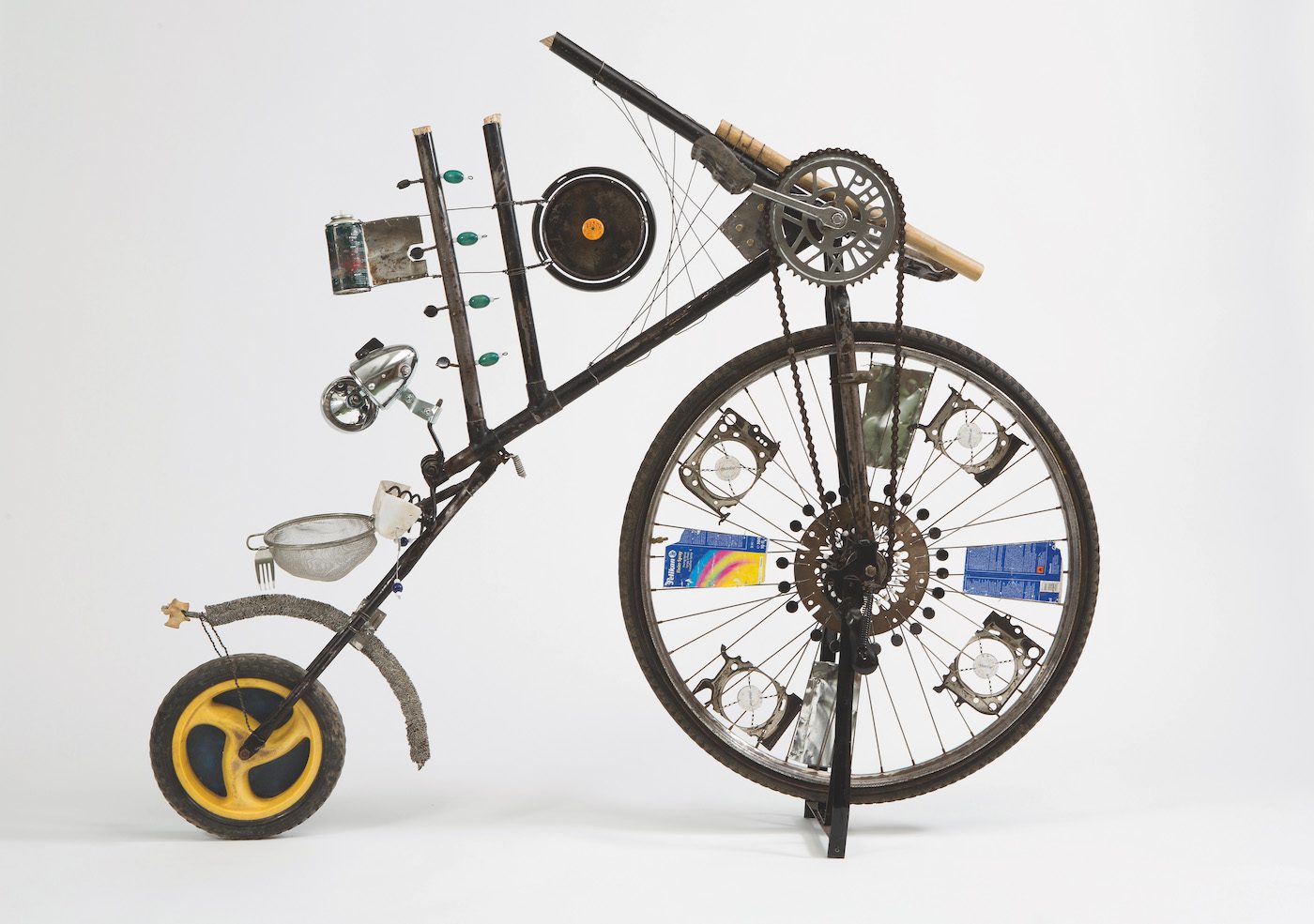 Cyrus Nganga Kabiru’s Alternative/Solution (2015)  is an intricate contraption made from found objects, and suggests interesting ideas around wind energy, sustainability, recycling, and innovation. Série The Next Future (2015), a photographic diptych by René Tavares, shows two young people standing on a heap of rubbish, evoking questions around landfills and pollution, and their long-term effects on the environment and future generations.

Closely surveying Lumieres d’Afrique reconfirms for me that contemporary art can do more than “add a bit of soul to the continent’s growth.” The artworks amplify agency and prompt layered discourse on development in Africa and what it means for the environment and people across the continent.

Lumieres d’Afriques originally opened in Paris in 2015 ahead of the Paris Climate Summit, and it has since travelled to a few European and African countries, including Senegal and Ethiopia. Its Johannesburg run coincides with the sixtieth anniversary of the “Year of Africa,” which cultural and literary theory professor Cedric Tolliver describes as: “A phrase coined to mark the year in which seventeen African countries declared their independence from European colonial states.” 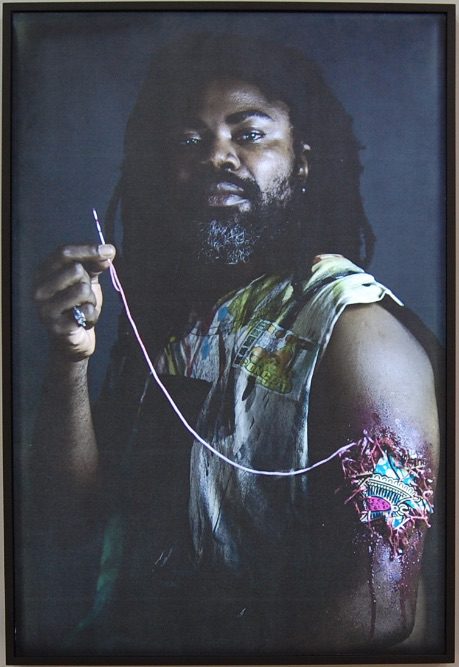 Since it is happening during a moment of reflection on Africa’s histories of liberation, we should also examine Lumieres d’Afriques’s rumination on the past. Artworks that call upon history to complicate understandings of today include Future Monuments (2015) by Nathalie Mba Bikoro. Bikoro’s photograph shows a person holding a needle and thread connected to stitches around an oozing gash on their upper arm. The laceration exposes a piece of patterned cloth that resembles printed wax fabric. The scene could be read in a myriad of ways, most obviously as pointing to colonial histories of textiles and how they have been reclaimed and refashioned by various communities in Africa. While the sitter’s bleeding wound draws on how legacies of violence show up today and incite collective healing processes. 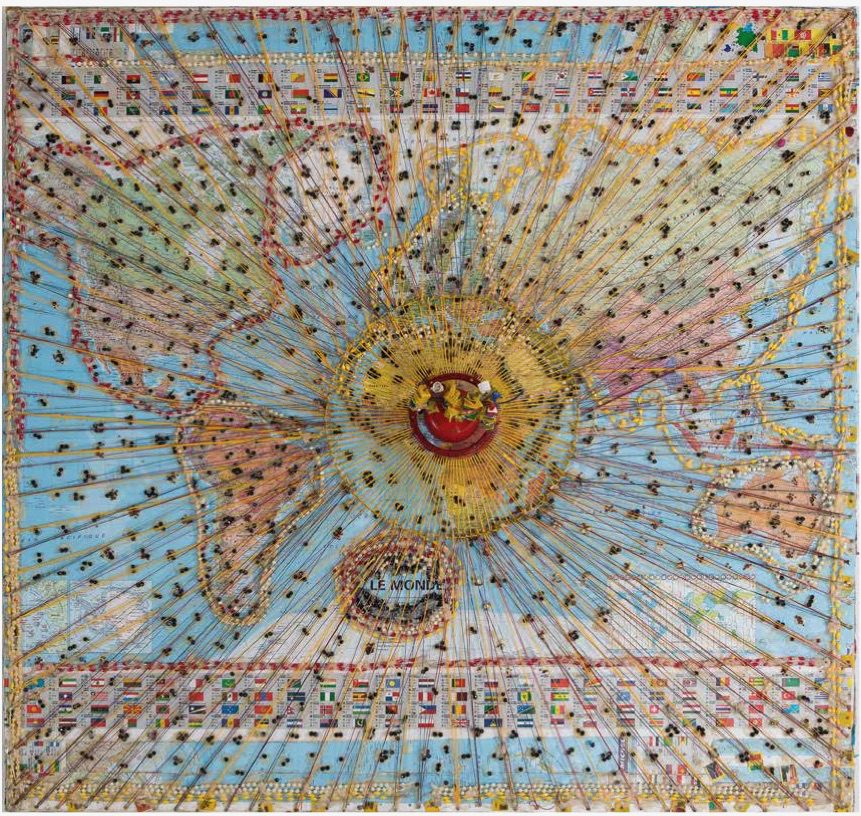 As the communication around Lumières d’Afriques and its virtual exhibition experience highlight the fifty-four artists, the concepts of borders and geographical “representation” surface in the show. At a time of urgent sociopolitical and economic reimagining, sparked by Covid-19 and ongoing conversations on decoloniality, rigid geographical divides are unsettled by a few artworks. Weziza (2015) by Aston shows a world map with Africa at its center and innumerable woollen threads outlining regions and connecting territorial points. Weziza disrupts colonial lines of separation aimed at control to instead articulate the interconnectedness of people and spaces. Malala Andrialavidrazana’s print Der südliche gestirnte Himmel vs Planiglob der Antipoden (2015) shows parts of a map entangled with banknote imagery and what looks like archival drawings. Andrialavidrazana’s work weaves dominant histories with ideas on commerce and indigenous knowledge systems to create a new and subversive narrative. 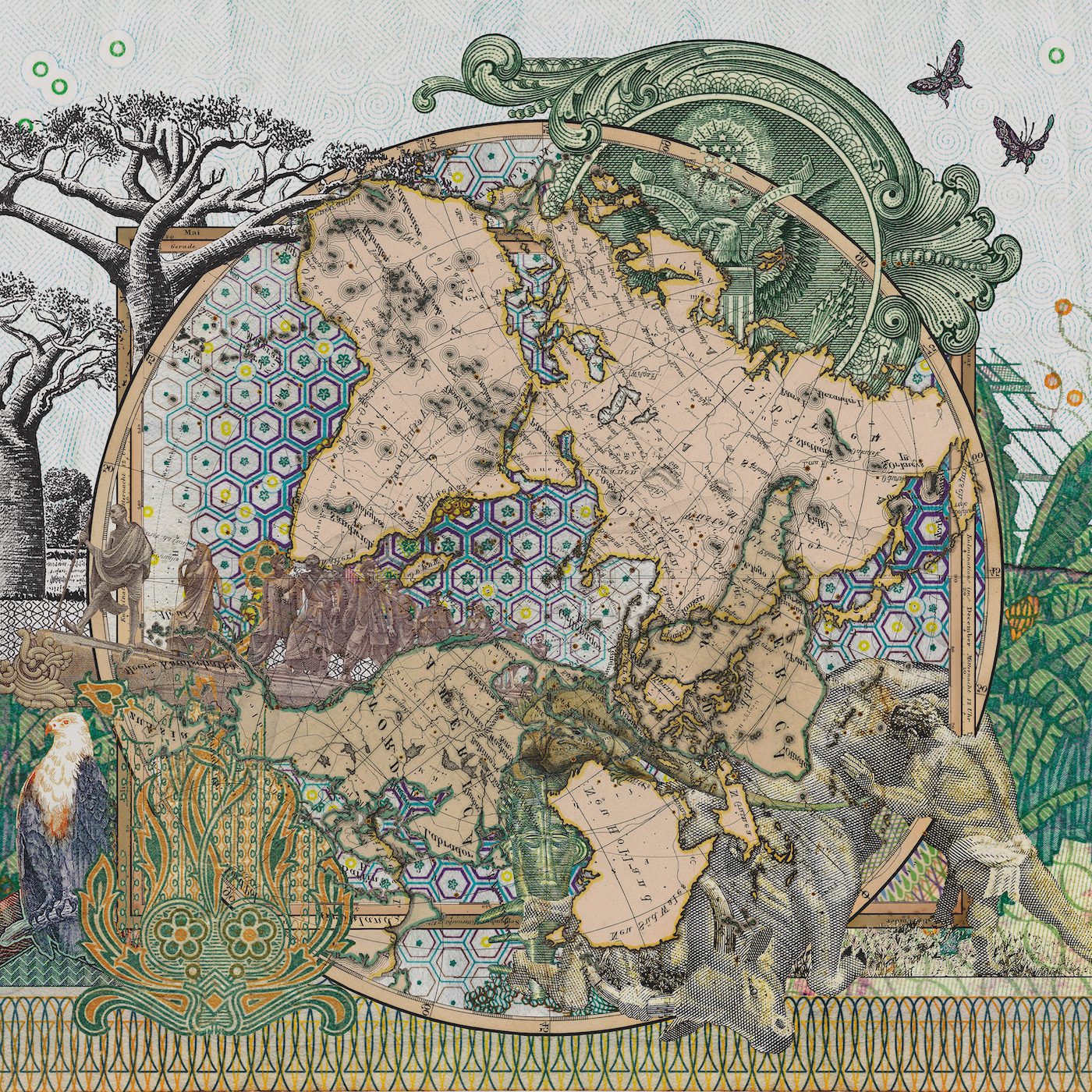 As uncertainty casts its shadow on tomorrow, the global pandemic has not only laid bare unjust societies but has also provokes a need for the world as we know it to change. Lumieres d’Afriques, an exhibition ambitious in scope, beckons for a critical, nuanced examination of what development looks and feels like across Africa. While the show’s artworks – which heighten agency, and many raising questions about power dynamics created through institutional structures, politics and foreign aid – propel thought on ways in which practices that are climate conscious and centre marginalized people are crucial in shaping inclusive environs across Africa.

Go for a virtual tour through the exhibition here.

Stefanie Jason writes about visual culture and has recently completed her MA in Curatorial Practice at Wits University ahead of joining Rutgers University’s Art History PhD program this fall.

There is so much of ourselves

Conclusions from the Symposium In/Exchange